Today is Bastille Day.
My mother always used to write that on the labels when she made jam at this time of year. Not July 14 but Bastille Day. I still treasure one of those empty pots with her handwriting on. It took me years to realise that although she was no longer there in person, she lived on in all the things I enjoyed doing - like knitting and crochet and sewing and gardening and talking to dogs and cats and any other wildlife that happened by. She will always be with me.
Thank you all for your fan mail to Muffy. She is really rather pleased, having been considered up to now (by the other two dogs anyway) as the dumb member of the family (inevitably goes to the hinge end of the gate; pushes against doors that open inward, that sort of thing). They, on the other hand, are both pretty furious at this birdbrain getting talked about in far corners of the world when anyone can see that they are far prettier and brighter.
I said in a previous posting that I thought she was a canine yarn harlot but Wanda at Fiberjoy has suddenly stopped me in my tracks. As you will know if you’ve read her latest weblog, Wanda’s been on jury duty lately (knitting socks at the same time, of course) and that gave her thoughts a legal angle. Did you, she asked sternly, fixing me with a steely glare clear across the Atlantic and the whole width of the US (she lives in Oregon), actually see Muffy taking the yarn? See her chewing it to a slobbery knotted mess? Well, no, I didn’t. I just assumed.... Ah-ha! Assumed. What if, suggested Wanda, getting into her legal stride, ANOTHER had spirited away the yarn and put it under the cupboard, knowing that Muffy would be blamed? Someone like Tasha, for example, small, very composed and self-reliant, and frighteningly intelligent. But - . Never mind but, is it possible? Yes, I suppose it is. And, knowing Tasha’s character, it is actually just the kind of thing she would conceive of doing. She didn’t get to be Number One Dog by just being a pretty face (well truth be told she got it by being there first, but she's never had much trouble holding her title.) 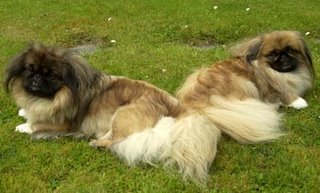 Muffy on the left, Tasha on the right. From which would you buy a used bone?

Do I lay out some more precious skeins (no, cherished customers, not the Celtic Memory heirlooms, but something harsh and lurid, something I bought once in a fit of mental aberration), and then set up trip wires, infra-red cameras, beams? DH would love to help with that side of it, being a keen nature photographer. But if I did find out the worst, would I be better off? How could I live with the knowledge that one small dog was capable of such villainy against her half-sister? Dear heaven, it beats the Medicis and the Borgias paws down.

All of a frazzle with this uncertainty, I went down to the deep soothing woods of Muckross at Killarney to re-photograph one of my new yarn creations against Torc Waterfall, a fairly stunning natural setting which I never tire of visiting. I took along Sophie, because she’s got the longest legs and, being younger, the most energy. 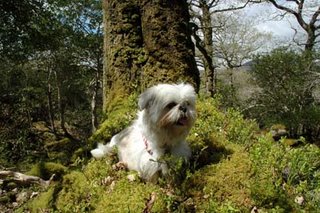 She had a lovely time clambering around in the deep moss and over ancient tree trunks while I tried to find just the right spot for the photograph. Have you ever noticed that while your eyes can take in the whole of something beautiful like a waterfall, when it comes to pointing the camera lens, you can’t get anything like the same effect? Eventually had to climb half way up some very slippery wet rocks to get almost the shot I wanted. You never get absolutely the right one, do you? 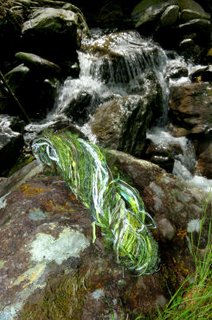 I was so embarrassed! Returning down the steep little winding path through the forest, Sophie trotting serenely ahead on her leash, me with my mind completely in free-fall, we came unexpectedly on some charming American tourists climbing up. They exclaimed with delight at Sophie and advanced to make friends, whereupon she shrieked piercingly with terror, slipped out of her entire harness with one fluid movement, and was off down the hillside like a mountain goat. Of course I had to stay and make flurried explanations and apologies and assure them that no, we really did love our visitors and please don’t take the dog’s reaction personally. I hope I succeeded, but am not entirely confident. After all, how would you feel if it happened to you? I don't know where I've gone wrong with that pooch but while almost over-affectionate to those she knows, she is petrified when faced with strangers. No, I got her as a baby (see previous posts), so she hasn't any bad history, and she's never been frightened by traumatic experiences - although I do suspect Tasha of reading horror stories to her in bed at night. Whatever - she's no socialite, that's for sure.

When I got back to the car, Sophie was hiding underneath it, shivering of course, and looking as though she had been brutally treated by a bad owner. An elderly couple dining on ham sandwiches and a flask of tea in their own car alongside gave me very cold looks, murmuring, ‘Shame’ audibly under their breath as I tried to drag the little cow - sorry, my poor little dog - out from her hiding place. When I eventually managed to slide her into the car, she immediately leapt up on to the back seat and proceeded to roll joyfully on (a) a rather nice wool cardigan, (b) my knitting bag which of course was open, and (c) a bag of rather squashy raspberries which I had bought that morning and intended for jam.

Of course when I yelled she did her badly-treated-poor-little-mite act again which smote my heart with guilt and so I drove home with a wet, muddy bucket of love lying heavily and contentedly on my lap. The cardigan and the knitting will probably be OK if I leave them to dry before brushing off the mud and other detritus of the forest floor, and the raspberries were going to end up squashed when I made the jam anyway .

Nearly done with the back of Anny Blatt. I should have finished it by now but came up against that bugbear of all knitters, the tangled ball. For this one I cannot blame any of the dogs, I did it myself. I don’t know how, but I did. Well, I do know really. I’d been working away contentedly, drawing from the inside of the ball, but at some point I tugged, a few layers of the outside fell off (it’s a very floppity yarn this dark blue chenille) and I compounded the disaster by pulling yet again before I realised what was happening. 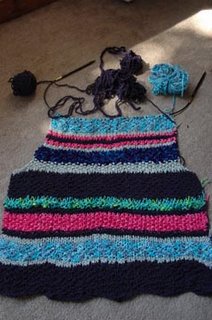 Why does it take so long to untangle a knotted-up ball of yarn? You’d think it would be easy. I draw out long loops wherever I can find them, search for the other end (the one that isn’t already on the knitting needles and pulling itself happily off in dropped stitches whenever I jerk too hard), and try to ease everything loose, but it just gets tighter and tighter. I’ve left it laid out on the floor of my sanctum until I have more energy, and locked the door this time. Don’t think Tasha has a skeleton key, but I wouldn’t put anything past that little madam.
Posted by Jo at Celtic Memory Yarns at 10:58 pm

I LOVE your mum .."Bastille Day " she was a woman after my own heart to say the least !! I think you have a small furry at your house ,Sophie has my personality .I need medication though and I am not sure if they do anti-anxiety tablets for dogs.What did your Mum for The Easter Up-rising ? Is there a monument in Dublin to the heroes the British Govt. had shot ? Does it ever make you wonder who made money in armaments shooting Indians ,Africans etc for wanting there own land.I had an aunty who wouldn't look towards Caversham well your site is very entertaing.m ( sub. of Reading) because the huge house ( now The B.B.C ) was owned by a family who owned mines in Wales ..I was impressed

that's supposed to read "me" regarding Sophie ..a notorious typo fiend .

It's so true...we have many things that remind us of our mothers...thank God! I miss mine terribly (dad, as well).
I love your photo of the waterfall...God's creations are beautiful indeed!
Assuming your poor baby did vile things to your yarn...shame on you...LOL! She doesn't have the look of a villain! LOL, but, one never knows what the little angels do when our backs are turned...LOL!
I left you a pm @ KH regarding the email.

The hike to Muckross (?) sounds wonderful - dogs, mud and all. Sophie certainly ruled out any shadow of suspicion of being the yarn harlot. No yarn harlot is going to willfully trample muddy paws over beautiful yarn.

The falls have the look of a place the brownies gather, perhaps that's who Sophie really saw on the path.