Wherein Ferocious Frogging Is Interspersed With Sea Air, And An Ancient Road Is Discovered

It comes to all of us.  That day when you look around and realise with appalled horror that things have got completely out of control.  For some it's the garden (we won't even go there right now, OK?), for others it's the housework (what's that?)  For an obsessive crafter, it's the day you open a cupboard and a hundred projects in various stages of incompleteness fall out, you rummage round on a sofa to find a ball of yarn and seventy-seven previous Brilliant Ideas set up a cheeping and a begging for attention, you try to extricate a perfectly innocent scarf from a corner and it's being dragged back by angry Works in Progress.

Chez Celtic Memory we did try to ignore the growing problem for as long as possible (how long have I been blogging now?  About eight years, I reckon.  We won't bother excavating back beyond that, will we?  Some things are better left in peace.)  If a particular size of knitting needle or hook couldn't be found, oh well, it was time to buy some more.  But when you start a delicious new project and then discover the crumpled remains of that pattern, already marked up in your own hand, and you don't even remember starting it before, then something has to be done.

And so it was that this past weekend consisted of Ferociously Finding and Frogging Friday, followed by Savage Sorting Out (plus Swearing) Saturday, and Serious Stowing Away Sunday.  May feel better soon, but still in the appalled state.  How, how, HOW ON EARTH could I have started and failed to finish so many projects?  Worse still, what was I thinking for most of them?  Wrong colour, wrong style, far too ambitious, far too simple, utterly boring, won't wear it in a million years, don't know anybody who would accept it, even as a gift... ye gods it was depressing!

I had intended to photograph each condemned project, the better to hammer home my depraved habits, and that's the way it went for a little while. 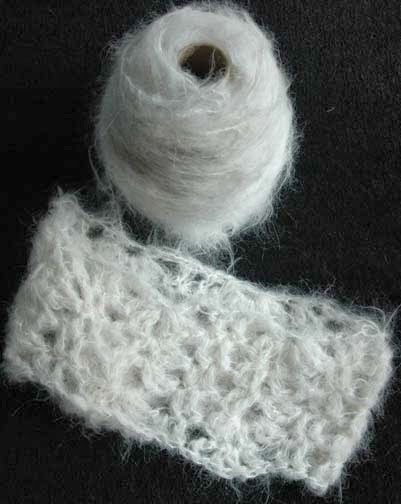 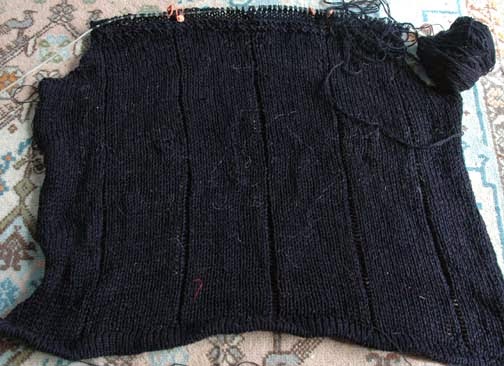 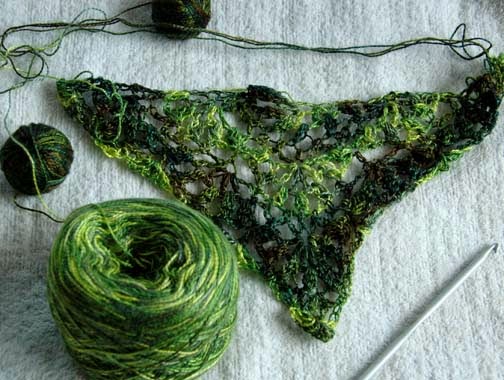 The crochet cowl in brushed suri alpaca, intended as a Christmas gift for a friend (made her a shawl instead). The combined machine and hand knit gansey, the main body done on the machine with the more complex patterning to be completed by hand.  The delicate shawl in two shades of green silk where the silk got tangled and I remembered that green just wasn't my colour in the past, present or future.  And dozens more.  What am I talking about?  MYRIADS more!  The upstairs sitting room began to resemble the glory hole at a jumble sale.  The ball winder was going full tilt and my arms were starting to object.

Oh yes, forgot to mention the arms.  Made a double-sided kimono in Shetland yarn for the Ravellenics this year.  On the knitting machine.  Which involved not just hours but days of bashing that carriage back and forth.  Should have known, should have taken care, but wanted to finish by the closing ceremonies.  Which I did. 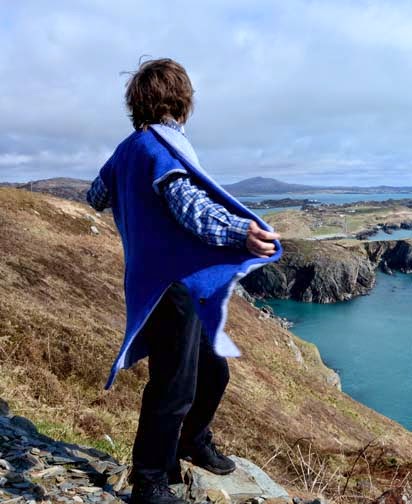 Lovely warm and wearable thing, ideal on chilly evenings.  Took it down to one of my favourite places, Brow Head above Crookhaven in West Cork, for a really nice picture.

Let's digress for a moment.  I'm sure you'd like to.  It was only when we'd finished the photo shoot and I had time to look around, that I realised just what a spectacular place this is.  We'd managed to climb down the cliffs through the gorse and bracken quite a bit further than usual - almost to the spot where the local fishermen used to sit and watch for the transatlantic liners in centuries gone by.  The liners would drop a drum of mail and newspapers, the fishermen would row out to retrieve it, and the mail would then be sent up to Cork by donkey cart and train.  In that way, the Cork Examiner often had the latest overseas news before the London Times, which gave them a very comfortable feeling of superiority.

But the scenery, you cry, the scenery.  Well yes.  I got DH to take a special shot because this was an angle you couldn't have seen from the narrow winding road that leads to the top of the hill, nor from anywhere normal really.  You have to clamber down the cliffs to get this one. 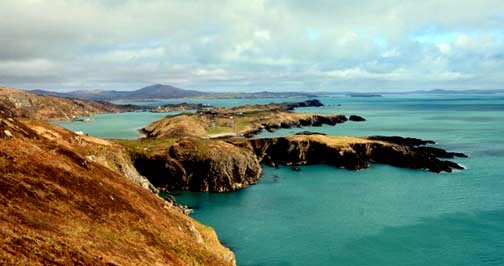 But it's worth it.  It's the kind of vision that literally shakes your heart.

Oh the kimono and the over-eager use of the machine.  Well, as soon as that was done, it was time for Sock Madness again, one of my favourite online annual events ever since it began seven years ago.  Our first pattern was Brucie, a lovely design from Amy Rapp.  I wanted to finish these in double-quick time, to qualify for later rounds, so some long knitting sessions were put in.  Towards the end the elbows, already complaining from the machine sessions, started some serious throbbing, but the socks got done. 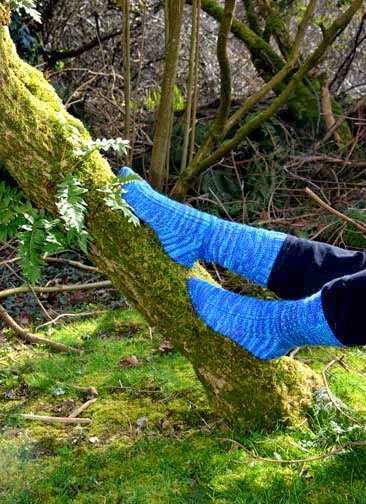 Aren't they lovely?  Trouble was, by this time I couldn't pick up a needle, let alone knit a stitch.  Suffered in (partial) silence for several days and then went shrieking to my pet therapist, who specialises in pulsed signal therapy.  This is an incredible non-invasive technique which can cure even slipped disc agonies, let alone RSI.  She gave me several treatments and then sent me home with stern warnings Not To Knit And Especially Not To Machine Knit for at least a week.  Which is where we are.

Frogging and winding and the retrieving of long lost treasures aren't really knitting though, are they?  And look at the rewards! 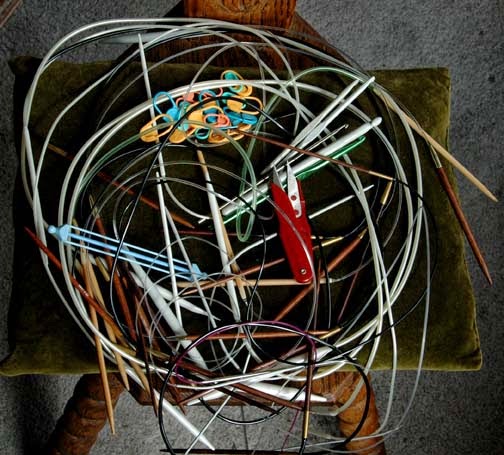 Here is what has been retrieved in the Great Sort Out so far (I don't think we're done yet).  There are approximately two dozen circulars there, of every size from sock to chunky, five or six crochet hooks, a stitch marker or two, a pair of snips I'd given up for lost, and dozens of those handy padlock stitch markers that I'm always trying to find. 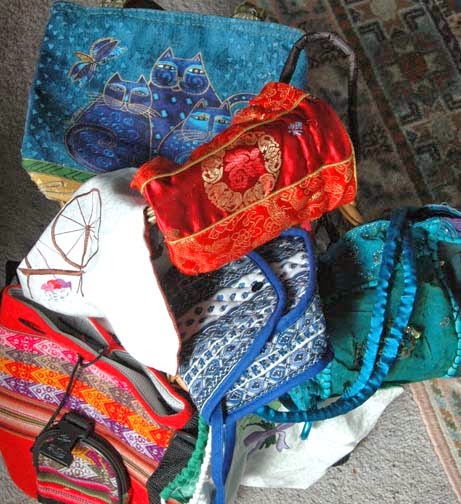 And here are just some of the project bags returned to usefulness and public life again.  Up there at the top is my absolute favouritest one of all, with blue cats on it.

No, I'm not entirely sure what I'm going to do with all the yarn frogged, rewound, returned to storage.  Some to the Ravelry stash for trade or sale, I imagine, others to eBay, others to anyone who loiters near my gate with empty pockets.  And then it will be clean, fresh, air-blowing FREEDOM chez Celtic Memory.  Freedom from guilt, from untidiness, from that awful pressure of too little time, too many projects.  Freedom - oh who am I kidding?  I know perfectly well that as soon as things are reasonably tidy, I'll be back out there with renewed vigour.  Forgiven, cleansed, ready to start all over again.

YES I CAN HEAR YOU THERE AT THE BACK, WINIFRED WAGGY-FINGER!  You are saying in that smug tone of yours that you absolutely never start a second project before you have completely finished, sewn up, washed, blocked, aired and worn the one you're on at the moment.  You never (perish the thought) buy more yarn than is immediately required.  You never, but never, yield to temptation, were it even Wollmeise waltzing past at half price, or Madeline Tosh murmuring gently from a shop window.  I would bet you vacuum your house daily too.

Well let me tell you something, Winifred Waggy-Finger.  You work that way because it suits you.  You actually like having only one thing to work on at a time.  You positively enjoy a daily bout of dusting and cleaning, even if it isn't necessary, and will only have to be done all over again tomorrow.   A place for everything and everything in its place is your mantra.  That's your way of living.  But it isn't Celtic Memory's.  For those of us who multi-task as a matter of course, there is nothing more exciting than suddenly leaping off at the glimpse of something glittering in the distance, swerving from the main road to follow a winding path through the woods to a sunlit glade, and never mind that dinner will be late on the table. The possibilities over the horizon, beyond the hill, in this new yarn shop we've never explored before are boundless, and who knows where the next step will take us?

I am trying, though, to make a few basic rules.  Say just seven or eight projects in active service at one time. Some knitting, some crochet.  You don't always want to do the one when the other beckons.  And some with fine yarn, some with bulky.  Silk and wool, cotton and bamboo.  And then there are new baby friends expected any moment, and a friend who needs a comfort shawl.  Maybe a dozen on the go at one time?  No more.  No, really.

Speaking of winding paths and sunlit glades back there reminds me to tell you of a wonderful find yesterday evening;.  I'd at last tired of winding up frogged yarn (or my wrists had) and DH commanded that we take the dogs out for a run in the countryside.  We headed for the wilds of the Kerry hills, far away from the popular main roads.  Magillicuddy's Reeks 'twixt Glenbeigh and Kenmare, sort of. 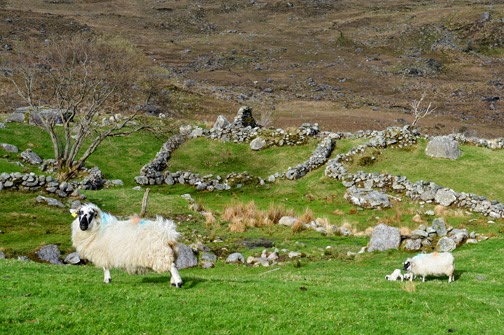 It's a wonderfully forgotten region, with just the tiny stone walls and hints of ruined cottages to remind you that large communities lived and worked here before the Famine.  Can you see the green lane going up by the gable end of a tiny stone cottage behind the sheep there? 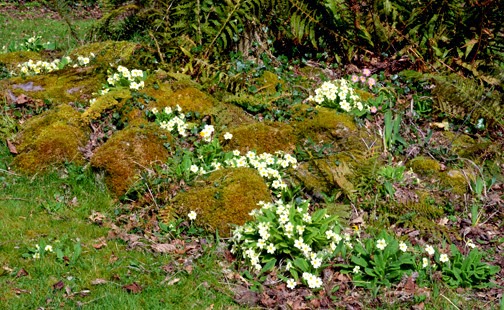 The primroses were carpeting the woods everywhere 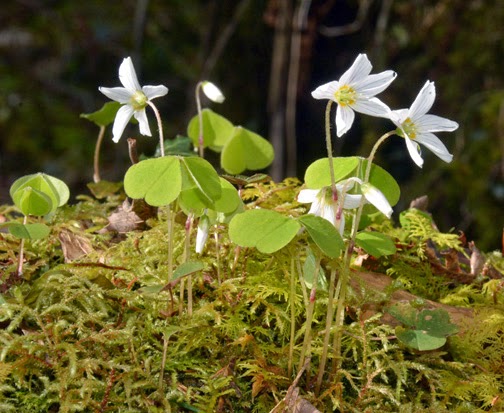 and the wood anemones were nodding their delicate little heads.

And then, pulling in by the side of the narrow lane through some very deep woods, we came across something entirely unexpected. We took the dogs out, and wondered if there was a way through the almost impenetrable growth of bushes, trees and shrubs, not to mention rocky outcrops.  Then we stooped under some trees which were lying across our way, and found ourselves - 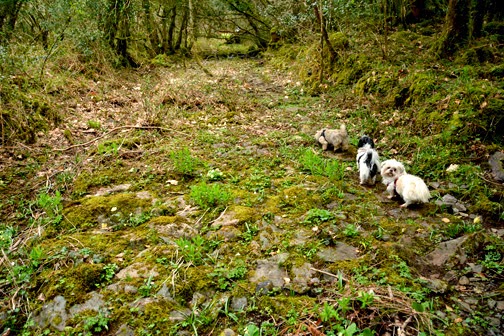 - on an old stone road.  A hidden, secret road, that you would never suspect as you drove by on the main highway.  Straight out of Tolkien. 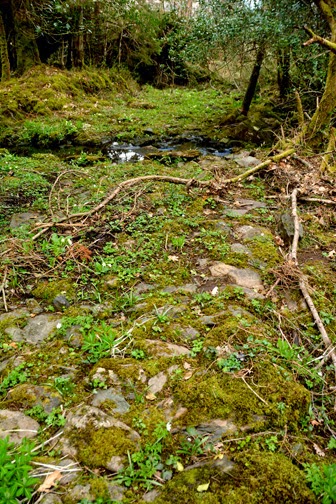 It is a road, certainly.  And an ancient one.  Whoever laid those stones did so many many centuries ago.  It wandered off in front of us, through light and shade, a mossy causeway across bogland.  Rushed back to the car, extricated the relevant map and studied it keenly.  No, no road, lane, track or byway whatsoever was marked.  It wasn't there.  But it was there! 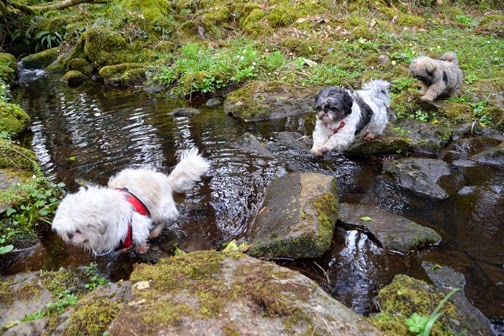 We followed it as far as we could.  At intervals little streams meandered across, and here old stepping stones pointed the way.  How many feet had passed this way before us, in times gone by?  And where were they going?  What were their stories?  The dogs, fortunately, took the stepping stones in their stride.

At last the fallen trees made it impossible to go further.  But we'll come back another time, and make another try.  An old stone road should not be forgotten, and I for one won't rest until I know what purpose it served, and who might have used it. 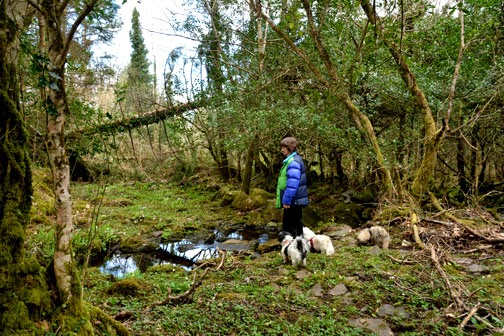