Of Storms and Strudel, Felted Toys and Fallen Trees

And a joyous New Year to everybody!  2014 is being ushered in here in West Cork rather violently, with storm after storm tearing across the countryside, downing power lines, flooding low-lying lands, disrupting travel and generally making us feel like our ancestors, huddling low in our caves and hoping against hope for spring.

Fortunately the storms hadn't started when we took a brief trip to Vienna early in December, to do a feature on the Christkindl or festive markets.  For a change, we decided to stay out by Schonbrunn rather than in the city centre and it really was rather nice out there, away from the crowded revelry around Stefansplatz and Karntnerstrasse. 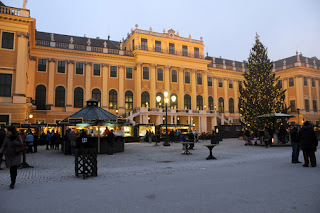 Personally I think the utterly charming little Christmas market they set up outside the royal palace is cosier and more in the spirit of the original than the jazzier larger ones around the Rathaus in the city.  During the day this more rural one is crammed with excited groups of schoolchildren who have had a healthy walk in the grounds before being allowed to spend their pennies on gingerbread and small toys at the stalls. 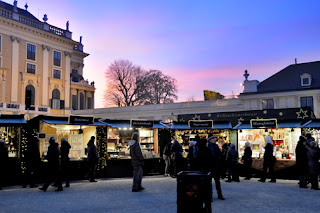 As the sun sets, the children have gone home, and the older folk take over, sipping mulled wine and gossiping with friends as they stroll from stall to stall. 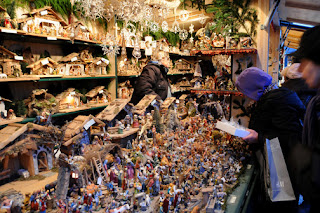 What do they sell?  Every kind of Christmas decoration you can imagine, from featherlight hand-blown glass baubles to hand-made wooden creches.  It's the kind of place you need to keep a firm control on your will power, not to mention  your purse.  It would be all too easy to dash from one bright little booth to the next, gathering basketfuls of the prettiest things you could imagine. 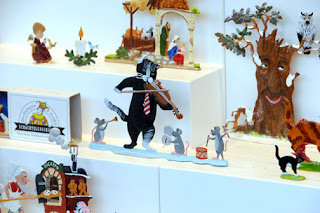 Look at these intricately wrought tiny metal ornaments.  Even the tiniest black cat was pretty expensive (as it should be, given the work that went into these very Austrian traditional pieces) but I did covet that wonderful tree with the doves on it! 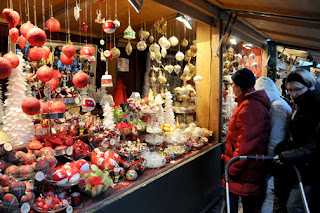 Most satisfying to the heart of an inveterate crafter was the range of hand-made, hand-felted decorations.  Whole stalls of little mice, elves, angels, deer, snowflakes... clearly Austrian imagination is wide-ranging when it comes to felted miniatures. 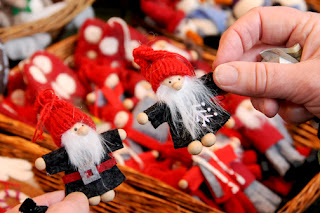 Look at these lovely little elves.  One of them came home with me. 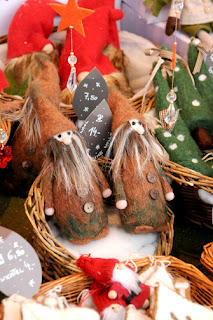 As did one of  these really beautifully made wild men of the woods (or so I christened them).  Didn't even realise DH had stealthily purchased one until I unwrapped the little package on Christmas morning!

No, we didn't spend the entire time wandering around the stalls.  (Although it would have been all to easy so to do.)  You can't go to Schonbrunn without clambering up the steep slopes to the Gloriette and getting the spectacular view of the city spread out below. 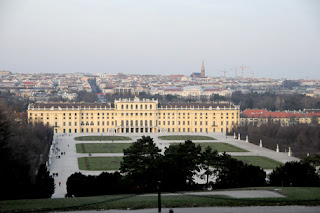 It was jolly cold up there, with a wind whistling straight from the Ukraine across the Hungarian puszta and losing none of its chill on the way.  Sadly, the cafe tucked right into the heart of the Gloriette was closed, but serious remedial treatment was needed if we were not to suffer from frostbite or worse. 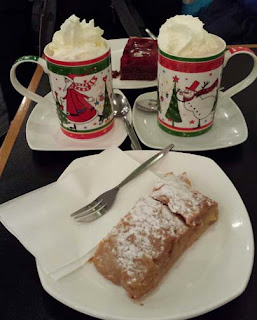 Fortunately, you're never far from serious remedial treatment in Vienna.  Kaffee mit schlag, und apfel strudel.  Gosh, there are times when I wonder why I don't live in Vienna.  Imagine being able to indulge in that whenever you felt like it?  No, on second thoughts, perhaps better not.  Are Viennese weightwatcher clubs always full to overflowing, one asks?

The most wonderful thing about wandering around the vast grounds of Schonbrunn though is the sense of the past you get, of the time when the Hapsburg Empire ruled supreme, the Emperor's word was law, and the fortunate could spend whatever they wished on whatever pleased them.  I'm thinking particularly of the gigantic conservatories, each one a symphony in wrought iron and glass, which must have demanded a positive army of gardeners and handymen just to keep them in the kind of order Franz Josef or Elisabeth would expect as they strolled the gravelled walkways before returning to the palace to dress for some grand gathering. 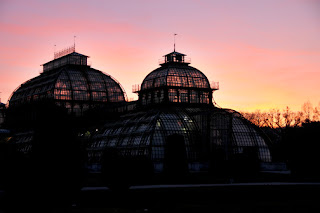 The past seems closest at sunset.  You can almost hear the whispering of silk gowns along the paths, get the scent of a cigar, the perfume of hothouse flowers gathered for the royal boudoir.  Theirs was a world that was to change utterly in the early 20th century, never to return.  The last Hapsburg heir died on - was it Madeira?  I know I saw his tomb there years back.  Sissi, however, will never be forgotten.  Like Diana, Princess of Wales in England, only more so, she is remembered everywhere and pictured on everything from chocolate bars to books, in paintings and poems, throughout homes and hotels, street signs and subways.

It was a lovely if very brief trip to Vienna, but once home there was Christmas to prepare for and as usual lots to do.  The knitting machine was practically smoking with the speed at which wristwarmers were being cranked out, while Works in Progress were littered everywhere, each in a bag or basket to keep it safe from predatory cats and dogs (ha ha, fat chance!  The two species have now worked out a satisfactory arrangement whereby the cats will knock down the desired receptacle and then make off with one or more balls of yarn, while the dogs fall upon the actual knitting with rapture and proceed to restructure it with the aid of paws and teeth.  Probably very good for their creative skills, but distinctly detrimental to the giftgiving list.

And then the storms started to strike.  We got warnings of strong winds and heavy rain but didn't take much notice.  We're always getting those.  But this time they really meant it.  One morning I was looking out of the study window here  at a particularly tall eucalyptus which should have been topped during the summer but hadn't been.  It was whipping wildly to and fro in the gales.  A few minutes later I looked again, and couldn't quite believe what I was seeing. 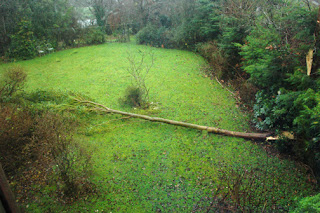 You know how it is - your mind can't quite take it in.  'But - but it was standing a moment ago,' you say stupidly, still staring.  That's a fairly large lawn, and a good thirty foot of tree.  Thank the Goddess it fell precisely as and where it did, missing both my study roof and the delicate little magnolia tree to the other side.  You can see the white scar of the broken trunk on the right, where the tree was snapped by the wind. 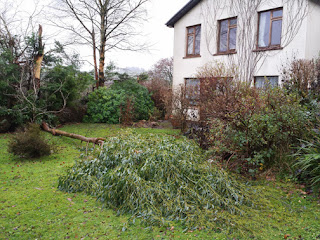 DH claims his picture is more effective, so I'll put that in too.  Either way, it was a lucky escape.  And yes, it did give a rather dreadful feeling too.  Admittedly we'd intended to top it, but seeing a beautiful tall tree lying snapped like that is - well, it calls to something very basic in us, I think.  We can't help but mourn it.  Maybe the remainder will sprout again.  We'll summer and winter it, and see (always a good gardening maxim to follow when things look done for).


The stormy weather has continued ever since and shows no sign of abating.  The weather forecast hardly varies.  'Heavy rain giving way to widespread showers.  Storm force winds abating slightly but strengthening from the south west later.  Flooding expected.  Structural damage expected.  Don't go out unless you have to.'  Strewth, will the spring never come? 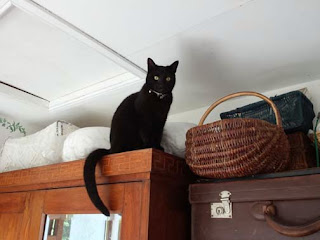 And inevitably there were some leaks, necessitating trips into the roof space to see what could be done to ameliorate the situation (certainly no time for going up on the outside.  Ni he la na gaoithe la na scolb, as we say in Ireland - 'the day of the wind is not the day for the thatching'.)  Polliwog in particular found these activities most engaging and began to spend a great deal of time on the wardrobe, waiting for the trapdoor to be opened again.  To see that cat make the leap from the bed a good eight feet upwards to the top of the cupboard is incredible.  I don't know how they do it.  (DH is still trying to capture it on camera but Polli won't do it if he thinks we're looking.) 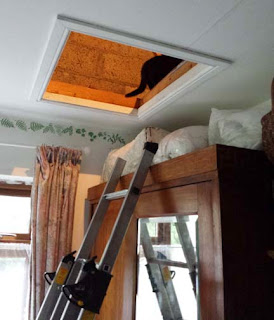 And of course, once the trapdoor was opened, The Great Explorer was up in an instant.   To wander and explore for an hour or more, until the rattling of a food bowl reminded him of dinner.

The dogs have been very distressed by the thunder and lightning that has been part of the stormy conditions, all crowding into whatever room we're in to get comfort and closeness.  The cats aren't so bothered (Polliwog in particular is setting up some complex wires and metal rods to experiment with) but have been spending more time than usual in the cosy warmth of the general living space rather than off on their own. 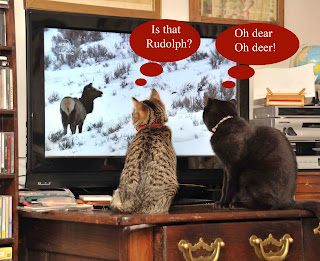 They have even developed an interest in nature documentaries, often sitting up very close, the easier to be able to reach out and gently pat the screen with an inquisitive paw if really fascinated.

May 2014 be good for you and yours.  Make it the year you finally go for that ambition, achieve that result, get whatever it is you've always longed for.  Write out a notice in large letters, 'Have You Really Tried?' and put it where you can see it every morning when you wake up.  (Well of course I'm going to.  Why do you think I'm mentioning it?) 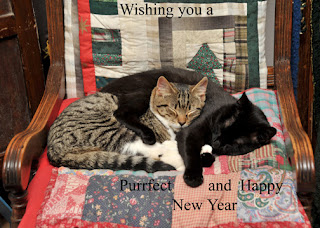