Of Mayday Celebrations, And How Fur is used for Warm Nests

On the first day of May we made our way up to the ancient site of the Cathair in the mountains which divide Cork from Kerry.  Didn't quite make it at dawn, but soon after, when the rising sun struck the great central stone in the enclosure and lit up the Paps beyond. 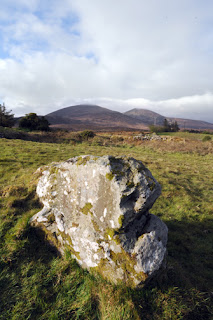 People have been coming to this high place since the dawn of time, to hail the rising sun on May Day or Bealtaine, and look forward to the summer.  The two smoothly rounded mountains in the distance are the Paps of Danu, goddess of fertility and the land. 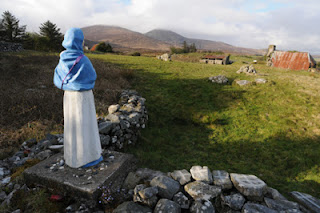 Christianity, unable to break the tradition of climbing to the Cathair at Bealtaine, turned the gathering and the ritual circling of the enclosure at sunrise  into a religious observance.  It put up a more modern statue too, but she fits in quite well.  Our Lady of the Wayside is not that different to Danu, and she watches over the countryside and the mountains as her pagan ancestress did. 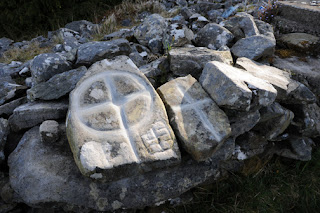 Here are some of the deeply-incised stones, several of which have clearly been etched by willing hands since long before Christianity came to this island. 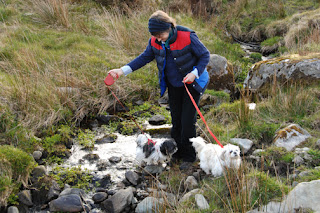 One observance that has never changed over the centuries is the custom of bringing animals to the well to drink on May morning or, if that isn't possible, taking the well water home in a bottle to administer as needed during the year ahead.  The well is enclosed now, to avoid too much muddy activity, but I walked both Sophy and Tamzin through the stream which runs down from it, to ensure their happiness in the months to come.

Tamzin has come on by leaps and bounds, grown a good coat, and is (almost) ready to come for a cuddle when coaxed.  There are still moments of blind terror and her reaction to sudden movements alerts us to possible past traumas but she is being gently eased out of bad memories and into a full realisation that life can be a happy thing. 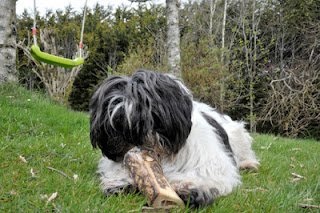 Trouble about that hairy little face is that you simply couldn't see if she was happy or not.  All you could glimpse was the occasional gleam of an eye through the thicket of fringe.  And so, very reluctantly, we did a small amount of trimming. 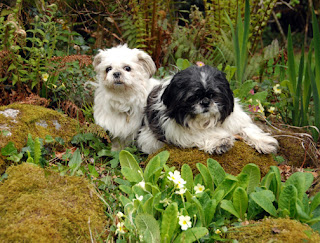 And what do you know, there was a bright little facekin in there all the time!  Now at least we can check her expression more easily.  (Sophy long ago adopted a permanent air of gloomy pessimism.  She found it got her more attention.)

The cats, too, are blooming, and (unfortunately) as full of mischief as a cauldron of squirrels!  They appear to be happy enough indoors, 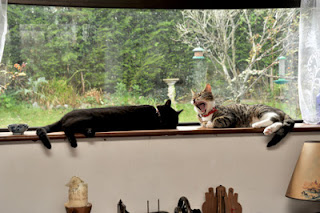 although my heart misgives me when I see them gazing out at the grass and the trees (and the birds, the birds, the tail lashing tells of basic instincts coming to the fore).  But the memory of a small still body lying on that  road outside is still vivid.  They do not go outside.  Not until they're a lot calmer and more placid.  Which may never happen, judging by the way they carry on at present.

Sock Madness started in early March, and both moggies took to it with great delight, seizing every opportunity to assist with yarn winding, advanced knitting techniques, and, best of all, independent frogging. 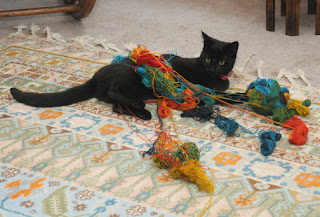 You'd cast on for a sock, get the ribbing started, then incautiously leave the room for a nanosecond.  That was enough!  Even large baskets of hand-dyed skeins weren't safe, and neither were those gorgeous balls of violet blue alpaca/silk from a recent Norwegian Stash Enhancement Expedition..  Do you know, they even tore open a ziplock bag of precious cashmere/silk/merino Sublime intended for the Michael Kors sweater, and distributed no fewer than three balls of it around a fairly large room, incorporating as many chair, table and sofa legs as possible?  One good thing:  DH is becoming quite an expert at disentangling and winding neat balls of yarn too. 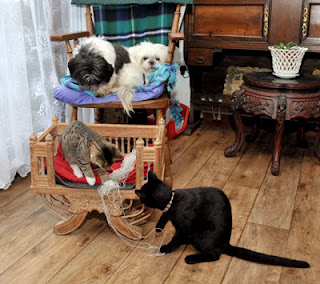 They get on absolutely fine with the dogs, occasionally deigning to play with them, but mostly preferring to enjoy their own feline games. 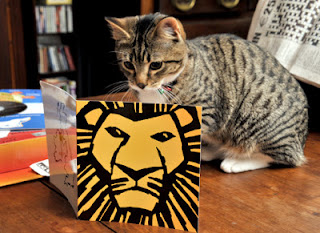 Ooh, look an invite to The Lion King! 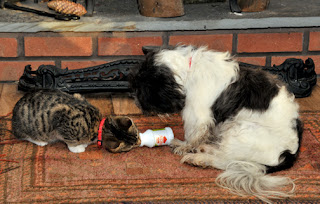 He never loses an opportunity to grab food, even if it's something that somebody else was actually enjoying at the time.  (Tamzin really is very tolerant and gentle with the cats, and they know they can risk it.  Sophy would snap their whiskers off if they tried this.) 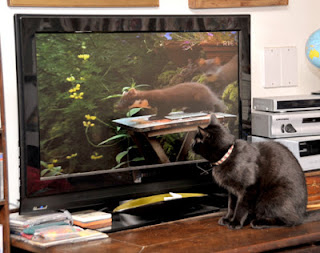 Pollywog, however, has a more explosive nature, and likes to watch fellow wild creatures on television 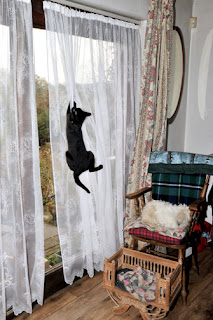 and then practise their moves to make sure he's got them right. 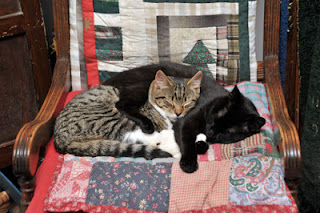 But their devotion to each other has never wavered, since that very first day Pollywog put his paws round a tiny squalling baby Podge and washed him until he slept.

It hasn't been a good spring so far in West Cork.  Chilly easterly winds continued far too long, and we were giving up hope as the end of April approached.  However, May exerted its power, and suddenly everything was happening at once.  Primroses, blackthorn, celandines, all the early flowers came out at the same time as the later bluebells, dandelions, buttercups, making for a wonderfully colourful display.  And the birds got busy all at once.

We always put little bunches of soft undercoat dog combings on the bushes near the house at this time of year, and this morning DH literally had no time for breakfast with the activity going on outside. 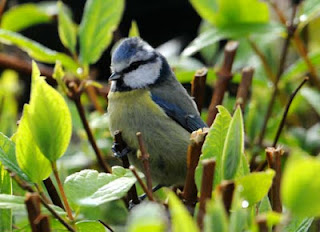 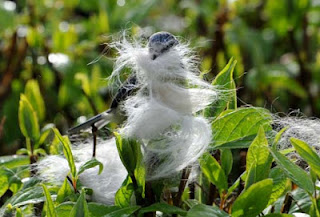 who gathered such a bundle of Sophy-fur that he looked like a flying cloud rather than a little bird heading back to his nestbox! 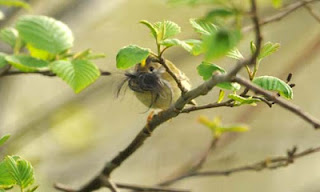 Then came a tiny goldcrest who preferred Tamzin's light grey 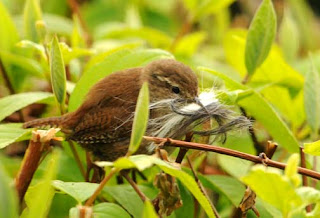 and lastly a wren who chose a blend of both.  We followed this little chap back to the corner of the garden where he had tucked his nest in behind a fencepost.  Cock wrens build several of these little boudoirs and then conduct their lady-love around to each, to see which she prefers. 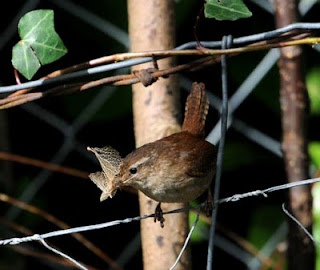 Clearly the little lady liked this one best, because she was very busy tidying up, placing the fur her mate had brought in just the right way, and then finding a skeleton leaf to make it all beautiful. 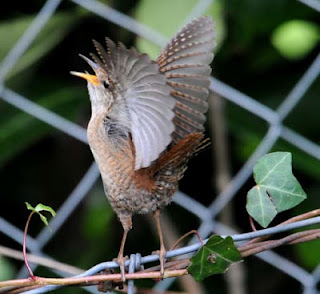 Meanwhile, of course, her mate was showing off most elegantly, raising himself on tiptoe, fanning his wings and tail, and singing his heart out.  It was a lovely morning, although we got very little else done.  So much to watch and see.

The garden is starting to unfurl at last too.  And I have a tiny nosegay on my windowsill which blends past, present and future in a very special way. 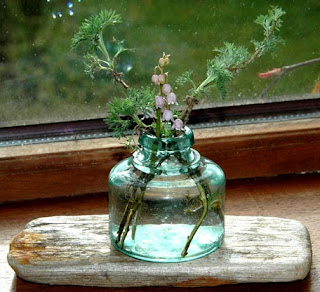 Just one stem of the rare rose-tinted lily of the valley which DH's mother brought from France many years ago to set in the garden here.  Muguet de bois is traditionally associated with May Day there.  The more usual white variety grew in the garden of my old home, and my mother would tuck its flowers into our hair on special occasions.   Its scent is unforgettable.  It didn't quite make it for May 1, but then, Old May Day isn't until the 11th, so this one is an advance guard, promising joy to come.

With it are some sprigs of southernwood (also known in different places as Lads Love, appleringie and several other charming country names).  It's an artemisia variety, possibly abrotanum.  This, above all else, reminds me of my old home and childhood.  My mother grew bushes of it, shaping them roundly so that she could put handkerchiefs to dry on their surface and give them that sweet scent.  When I unwillingly left home for other countries, I brought cuttings of that southernwood with me, and planted them wherever I went.  Moving on, I would either dig up the plants, or take cuttings again (it is exceptionally good natured about propagating - all you need to do is tear off a little branchlet with a heel and put it in water for a week when it will produce tiny roots, all ready for planting on).

When at last I came home to Ireland, I brought cuttings again, and set them in our garden here in West Cork. They are the great-great-great grandchildren of those original plants which grew in the place I loved best in all the world.  (Mount Verdon still stands, with my brother doing his best to keep it propped up, but these big old places need resources beyond the realms of possibility to restore.)  The last few bad winters hit the plants hard, but two at least have survived, albeit spindly and tired.  Gently I took little cuttings, and they are now getting ready to make their own place in the garden here, which I have come to love as much as my old home.  It is entirely fitting that they are tucked into an antique glass bottle which my brother discovered in the gardens of Mount Verdon.