One minute it's high summer, the next everything is ripening and it's inadvisable to leave the house without at least three plastic bags tucked in your back pocket. Long days of simmering, stewing, potting ahead. That's nice. Entirely the right thing to do as the circle of seasons rotates and we move towards the Celtic New Year on October 31.

While I think of it, if anybody knows a really good recipe for grape jelly that doesn't demand peeling the skin off every single tiny grape first, please let me know. Life is a bit short for that kind of thing, and you stew the skins anyway, before sieving the lot, so why, why, why? We look like having a bumper crop of sweet black grapes in the conservatory this year, and although the good folk of Macroom are now accustomed to receiving bunches at their desks, counters, front doors, there is still more than enough to make jelly. Home-made preserve surely has to be nicer than that over-jellified paste you get at breakfast stops in North America.

Had a birthday last week, and celebrated by dyeing up a whole new bunch of yarns to put up on eBay. They're up there right now if you want to go look. 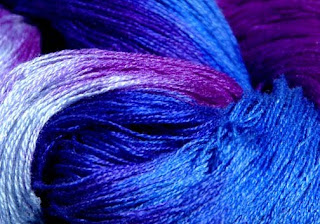 One is such a gorgeous cashmere/silk laceweight that I'm rather hoping none of the watchers buy it, so I can use it myself. I called it Faery Hosting, because it's the kind of yarn the Queen of the Good People might commission to make a truly dramatic shawl for a midnight ball. 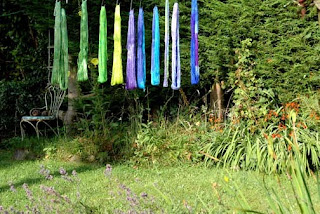 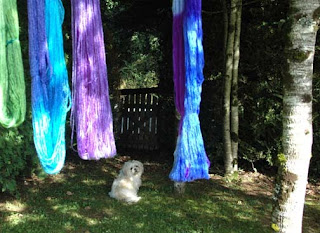 ...and here are some of them with Sophy on guard, in another location in the garden. I took this one to keep on my phone, and it shows up whenever DH rings me from home. That's nice, if I'm somewhere busy and noisy and crowded. Reminds me of the quiet serenity and green calm of Inshinashingane.

Oh that phone. Decided it would really be a good idea to have one that received emails, so went for this trendy thing called the HTC Desire. 'It's absolutely state-of-the-art,' said techie DH enthusiastically. 'Everybody is looking for one of these!'

'Can it make good phone calls?' I enquired cagily.

'And look at this, you can download all these apps...'

'What on earth are apps? Does it make phone calls?'

'Now this turns into a spirit level. See, you can use the phone to check that shelves are straight!'

'And this, show her this one. You can set up a mosquito repellent!'

'DOES IT MAKE PHONE CALLS?'

Yes, dear reader, I gave in and got this trendy cute little thingy. And have discovered totally new levels of stress since then. Oh I can push across from one brightly-coloured screen to another. I can check the weather in Beijing and Tapei. I can go from Google Earth to XE.com in the flick of a finger. Or I could if I could work out how to get online.

Phone calls continue to be a bit of a problem. The numbers are all there, transferred from Old Faithful. In fact they're all in twice, for some reason into which I have not dared to delve. But try to choose one, and nine times out of ten you choose its neighbour, and find yourself ringing Great Aunt Matilda in Ulan Bator instead of the newsdesk. Really useful tricks like speed dialling your nearest and dearest has now morphed into 'who the heck is this and why have I just rung you?'

Oh technology, oh progress, leave me be. Let me go back to the woods with my hand-carved knitting needles.

Which I did. Or to Gougane anyway. Took Sophy Wackles down to see the little stream running through the woods of holly trees and venerable oaks, 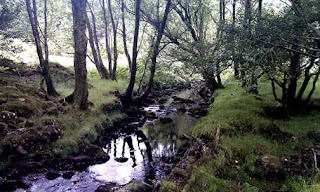 and told her she was paddling in the upper reaches of the mighty River Lee. 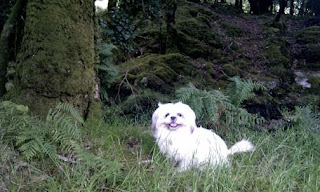 Sophy said that was grand, and where was lunch?

You may notice that these two pictures aren't quite as good as former ones. That's because I used the phone's own camera, dear reader. 'Gosh, you've got a really neat camera on here, look it's easy, you just...' At least I now understand (or think I understand) how some of you clever clogs on Sock Madness managed to get your pictures to the moderators while on flights, on the road, in the labour ward, whatever. I couldn't do it myself, mind you, or not yet at least. But I dimly perceive that technology has moved on to assist sock knitters (that is why it moves on, isn't it? Saw an 'app' on Ravelry the other day which made it possible to design new knitwear on your phone. While waiting for a UN conference to start, presumably, or sitting through a boring lecture.)

Where was I? Oh, in Gougane. DH, bless him, took me there for the birthday dinner. It was as divine as before, and they even put a candle on the dessert plate. 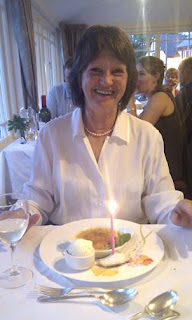 It's lemon creme brulee with a lime madeleine (be-candled) and a scoop of Murphy liqueur ice cream. What a lovely evening. Thanks, dear heart. Life is good with you.

Got an unexpected birthday gift from my mother too. My brother arrived out to the house with something tiny that he'd found while clearing out one of the rooms at the ancestral home.

At first I couldn't think what it was, and then I tried it on a piece of paper and remembered. It's my mother's buttonhole scissors that she used for all her dressmaking and machine knitting. Any good suggestions on how to restore it to usefulness once more? I know I'll lose the silvering, and I'm not worried about that, but I'd like to use it. Carrying on the tradition. Now are you going to tell me that she didn't put it there for my brother to find? Of course she did. 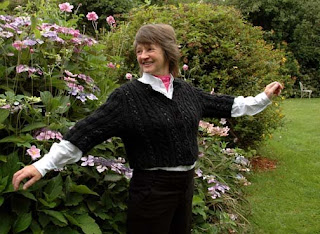 The cabled crop jacket in Elann Peru Soft got FINISHED! Yes, it did, it did, and let no-one say Celtic Memory is a hopeless WIP and UFO-er, 'cause she's not. Give her time, that's all... 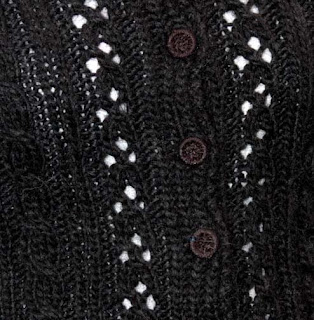 Here's a closeup showing the cable and lace pattern and also my pride and joy, genuine handmade Dorset buttons! I always knew how to make these, but it only occurred to me when finishing off the crop jacket that they would look very nice on it. The Peru Soft would have been too thick for the buttons, but some leftover Panda Silk was idea. Aren't they ideal? I'm going to make lots more. Maybe shank them together, so I could interchange bright buttons on jackets? So many possibilities.

Oh gosh, I have to dash. I'll have to tell you about Knit Nation and all the fun there, in the next posting. And the new shawl on the needles. And the Tristan and Isolde socks with pearls...
Posted by Jo at Celtic Memory Yarns at 1:28 pm 23 comments: