I've fallen victim to that dreaded virus, Proliferation of Projects.  There are so many on the go that I am starting to forget the ones in the study while picking up a stray one in the dining room, and ignoring the several in the bedroom. 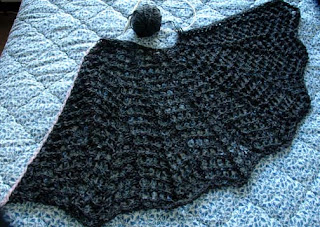 There is the Raven Shawl, for example, being worked from my very own handspun yarn.  Oh I'm hugely proud of making something right from the fleece, there's no denying that.  And it's a lovely pattern, just right for wandering in the autumnal woods and pretending you're a bird woman.  But it went on and on, and then one day, while looking simultaneously at a big pack of Noro Silk Garden yarn in my favourite colourway (08) and at my knitting machine, I conceived the idea of making a jacket in strips - the Panel Jacket if you're on Ravelry.  Handknit or machine, I wondered.  And then, 'Why not both?'  Two separate jackets, two different methods, let's see which is faster and which looks better in the end. 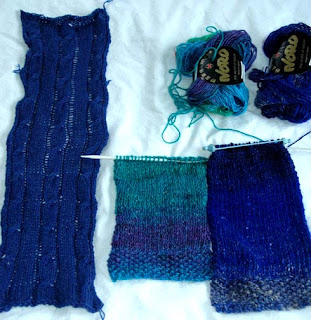 On the left, two strands of Shetland in Persian blue, machine knit, with cables every 10 rows.  On the right, two strips of handknit Noro, because I never can resist seeing if one ball knits up differently to another (it always does).   Machine knit jacket will be lighter, thinner, Noro handknit much thicker.  No, they're neither of them finished.  What a surprise!

More than enough to be going on with.  But then, in a wicked moment, my eye fell on some utterly gorgeous pale silver grey Norwegian silk/alpaca yarn which I'd bought (with a second mortgage of course, you know Norway) some time ago.  And I remembered the beautiful Japanese vest pattern I'd had for ages. 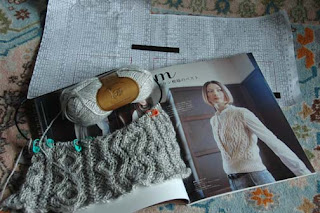 Now this pattern, as tends to be the case with Japanese designs, is so complicated you need three sets of eyes and five sets of hands, plus concentration and will power.  You can't take your eyes off the chart(s) for a moment or you're sunk.  Oh stunningly beautiful, no doubt about that.  But demanding.  Seriously demanding.

But last week we had one of those days given from the gods so all projects were dropped (can you imagine working a Japanese pattern in a bumpy car on a twisting road?  No, I couldn't either) and headed down to the Beara Peninsula.  Editor of De Next Book had indicated that a couple more images of still-utilised pagan sites might be handy, and where better to go than the Cailleach Beara, The Wise Woman, the Ancient One, who stands in lonely splendour at the very end of the peninsula that bears her name. 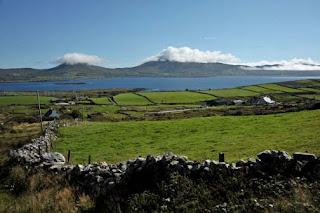 The clouds were just floating over the hills at the other side of Dunmanus Bay, and there was a warm breeze with the scent of heather and damp earth. 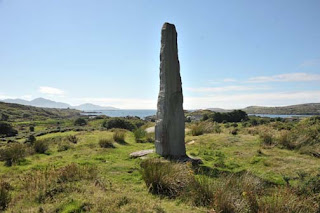 Went to pay our respects first to the Ballycrovane Stone, which stands on a hilltop outside Eyries.  This is a really massive old monument, fully 17' high, and there is probably as much buried under the modern landscape as there is showing above.  It's also one of the few stones with ogham inscriptions that has been left where it belongs rather than carried off to a university museum, and for that we must be grateful. 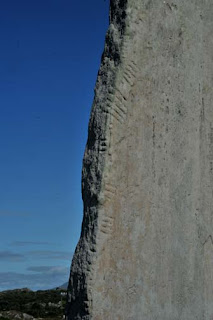 Here is a closeup of the ogham, painstakingly etched along the edge of the stone uncountable aeons ago.  It can be roughly translated as 'Of the son of Deich, descendant of Torainn.' 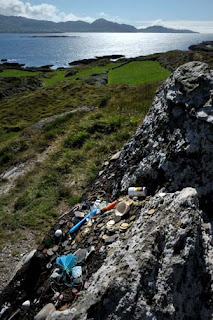 There were many offerings on the Cailleach, some older and rusting away, some very recently placed. 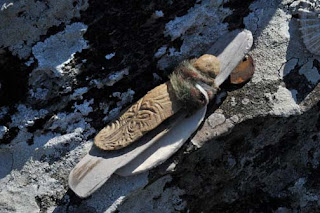 This caught my attention:  a beautifully assembled little token, sea-smoothed driftwood and a little carved pottery figure, tied with wool.  I wonder what the story was behind that offering? 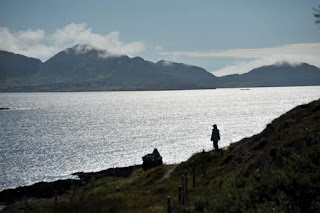 There was a very nice American lady there who said she'd been attending a retreat locally and they had come as a group to visit the Cailleach several days earlier.  She was due to return to the States at the end of the week, and wanted to come back here by herself for a quiet moment.  So we left her to the peace and power of the place.  Whoever you were, I hope you got back home safely, and that something of the Cailleach will have passed into you. 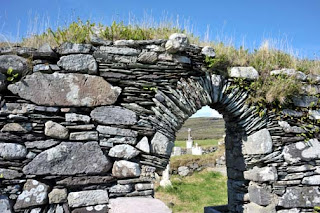 The ruins of Kilcatherine Church stand a little further on along the coastline, and we thought we'd better pay our respects to the ancient cat too, while we were at it. 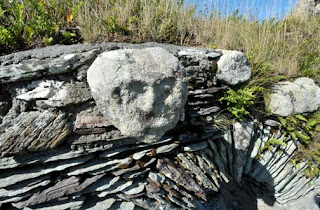 I know I've shown pictures of the Kilcatherine Cat before, but not for quite a while, so here's a closeup for you to decide whether you think it does look like a feline or not.  It's certainly ancient, and the tradition has always been that it is the Kilcatherine Cat, so perhaps better not to doubt the tradition.  You'd never know what might happen.  And again, one does wish one knew the story behind the legend.

The dogs were panting by this time, so we had a stroll by the water near Glengarriff. 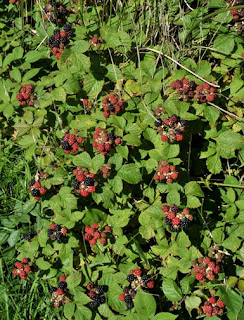 Gosh, the blackberries were ripening finely.  Simply cannot pass a bush of ripe blackberries without reaching for a bag and gathering as many as possible. 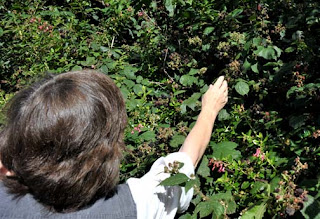 Fingers get soaked in rich purple juice, clothes get torn on the brambles, and it's hot work, but how could you leave them there?  Every one that drops into the bag speaks of winter evenings and glowing pots of jam on high shelves, pies emerging smiling from the oven, crumbles and cordials and all the other comforts that bring peace to the heart with the knowledge of harvest safely gathered in. 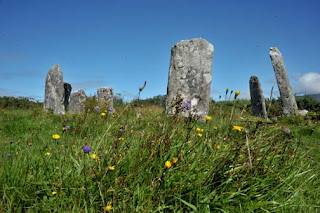 Finally we made our way to Dereensaggart stone circle, outside Castletownbere.  There were still flowers starring the grass around the ancient site, even in September, and I noticed a few little bunches tucked here and there in crevices of the individual stones.  Clearly visitors still know that respect should be paid to such places. 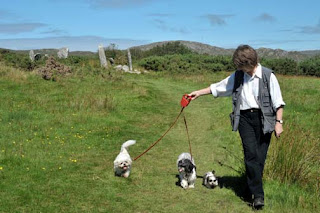 And then it was time to head back, weary dogs very glad to climb into the car and collapse for a well-earned sleep while we turned the car for home.

Hang on, wait a cotton-pickin' MINUTE, I hear you cry.  Who's THAT?  The little raccoon-eyed thing there between you and Tamzin? Ah well, yes.  I know, I know, we have quite enough of a zoo here already, with two dogs and two cats, each one a roaring individualist and demanding of special attention.  But Sophy Wackles is getting elderly.  She's stiff in the joints and inclined to be grumpy when Tamzin - only recently starting to discover the joys of playing and having fun,  you will realise - wants to romp and jump and tangle. Sophy snaps, sulks, shuffles off to bed.  And Tamzin wonders what she's done wrong.

No, it couldn't go on like that.  I knew you'd agree.  And so the hunt was on.  It took a bit of time.  You have to know, the second you see them.  You have to fall in love on the spot.  Anything else just won't do.

And finally, it did happen. 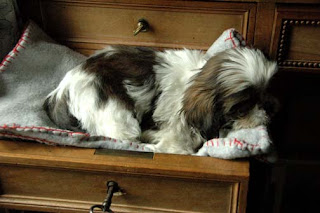 Little Shih-tzu puppy, just eight weeks old, was tiny enough to be tucked into my desk drawer here where I work at the computer. 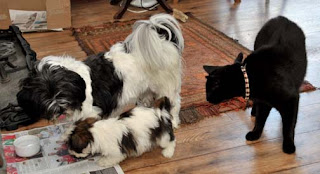 Taz took to her instantly, and constituted herself Baby's minder-in-chief, ensuring that she got her vitamins and that cats didn't interfere.  ('I just want to know what on earth it is,' said Pollywog in fascination.)  And when Sophy started to glower, Tamzin was instantly there, placing herself between them and clearly letting Sophy know that she wouldn't stand any bullying.

Sophy is now enjoying a little more peace and quiet.  Puppy is getting more rambunctious by the day, tearing here, there and everywhere, chewing everything she can find, developing quite a firm little 'wuff' of her own when she thinks it's mealtime (puppies always think it's mealtime).

But did it work?  Did Tamzin  rediscover the joys she had never had as a baby herself, of tussling and rolling over and chasing with someone who enjoyed it to the full?  Running from one end of the garden to the other with a companion, leaping and dodging and generally having free and happy FUN? 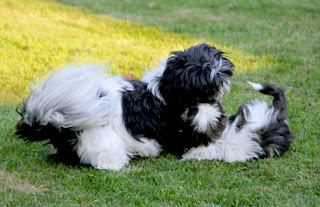 Yes.  She's still very gentle with smallest one, but you can see her gradually strengthening the nibbles, the pushes, as the puppy gains strength.  And she is so, so much happier and playful, it would bring tears to your eyes.  They are going to have many contented years together.

No, you're absolutely right.  I haven't mentioned her name.  That is because we simply can't make up our minds.  Babyboots or Chucklechops are fine for now, but what about when she's a beautiful and elegant fully-grown Shih-Tzu? 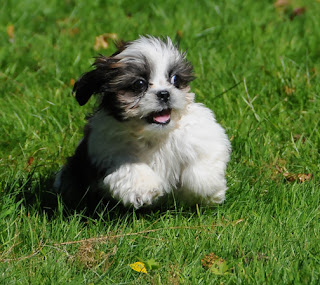