Of Ravelympics, Country Buses, And A Lost Island

Been too busy lately. Honestly, what did we all do before Ravelry? Got a lot more done that isn't being done now, that's for sure. As soon as one special event or contest finishes, another seems to start, and we're all in a constant whirlwind, saying to ourselves, 'When all this is over, I'm really going to...' Think about it. Haven't you said that lately?
I'm getting worried that there never is going to be a time when it's all sorted and there is plenty of space to catch up.

The Ravelympics, of course, took up a fair bit of time. Frogged some Rivendell socks which were going to be far too small, and also a Dogi vest (from Vicki Square's Knit Kimono) which would never have suited me anyway. 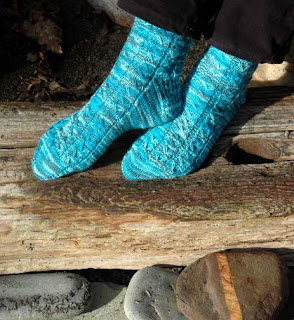 Made these Turquoise Gull Wing socks from some Lorna's Laces Shepherd Sock yarn, using a gusset heel from Wendy Johnson's Toe Up book, and seriously adapting a Faux Gull Wing stitch pattern from Barbara Walker. The gusset heel is a bit fiddly to work from the toe up, but fits beautifully when it's done. 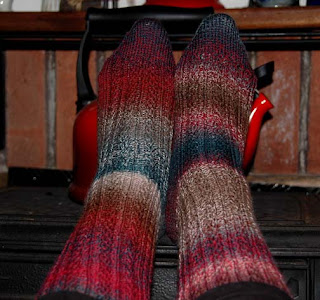 And at long last the Conwy socks got finished. About time too. These were started at the UK Ravelry Day last June for heaven's sake!

Didn't succeed in finishing the Anny Blatt jacket nor yet the Espresso jacket, but it was daft to take on so much anyway. Have sense, do! (Celtic Memory is not renowned for her sense, especially where starting new projects is concerned. Optimism triumphs over practicality every time.)

And if further proof were needed, we are now waiting for Sock Madness to start. More days of frantic hysteria! Getting fidgety in the waiting though (it tends to be that way when there is even a tiny break between high-pressure events - are we becoming hooked on pressure? Don't answer that.) Began a little neckwarmer scarf in a complicated Aran pattern just yesterday, but got totally tempted this morning by the Travelling Woman Shawl (that was your fault, Angeluna, for telling me about it, you know it was), and cast on for that this afternoon. See? no sense.

Managed to find time to dye up some new sock yarns, and get them listed on eBay (the listing takes almost as much time as the dyeing). 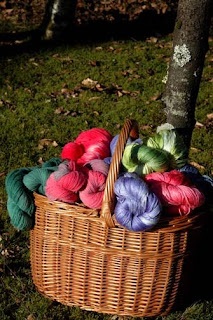 Merino/silks here, as well as merino/tencel and some rather nice lambswool/angora in a laceweight which would make divinely warm little neckwarmers, cowls, shawls.
I'd like to share a recent heartwarming trip with you. DH was given the job of shadowing a country bus driver on his very last trip before retirement. Jim has driven the Cork-Tralee route for forty-three years and is well known and well loved everywhere along the route. 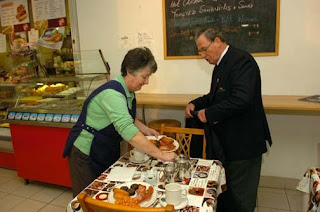 The day started early, with a Full Irish at the bus station in Cork. (Those with high cholesterol, don't even think of enquiring about the nature of a Full Irish, ok? On this occasion it was something of a rite of passage, with extra black pudding and rashers and things like that.) 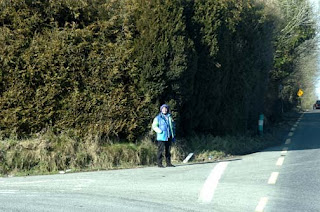 The route took them past the end of our road, so I came down to the crossroads and hopped on to share this special last day too.
You wouldn't believe the places he had to stop to allow old ladies to push packets of sandwiches or bags of biscuits through the window, friends to climb into the bus briefly to shake hands, other bus drivers to block all the traffic while they exchanged good wishes through their respective windows. One very silent woman on the bus from Macroom to Millstreet got up to leave and suddenly produced two Mars bars from her bag, putting them wordlessly down on the seat next to Jim. That brought a lump to my throat and, I imagine, to his as well. 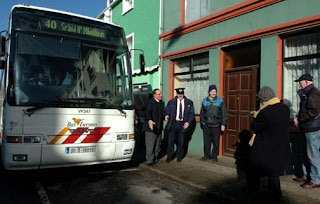 In Millstreet town, as in several others, there was a reception committee of wellwishers, taking pictures and pressing little gifts on him. 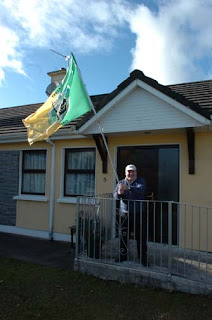 This flag-waving friend on the Cork/Kerry border must have been watching from his window for the bus to appear round the corner. He dashed out, brandishing the Kerry colours wildly, and cheering Jim on his last run. 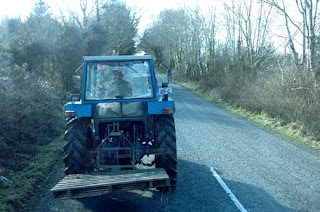 After forty-three years, Jim knows absolutely everybody. Even this farmer driving a slow and battered tractor in front of us. 'That's Neily,' he cried in delight, drawing abreast of the cab and slowing to hold a shouted conversation. It could only happen on these quiet country roads.

And that's not the half nor the quarter of it. The sheer number of people coming out to celebrate his last day driving the Cork-Tralee bus speaks volumes for the man and the affection he has engendered over the years.
We came down through the hills to Killarney, where fresh snow was lying on Magillicuddy's Reeks - a view that Jim has enjoyed every day of his working life. 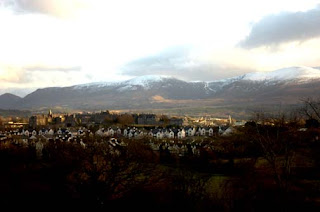 At Killarney, sons, daughters, grandchildren were waiting, and a few got on the bus to keep him company for the last leg to Tralee. 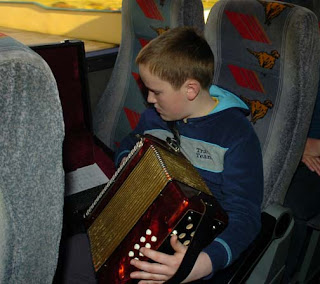 This is one grandson squeezing out a lively tune for the end of the road to keep his grandfather cheerful (not surprisingly, Jim was getting a little choked up by this time). 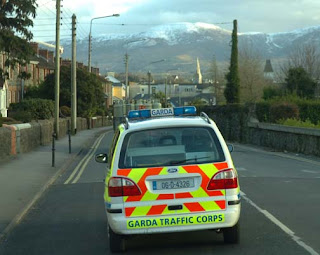 He even got a police escort for the last leg, I kid you not! Flashing lights and all. 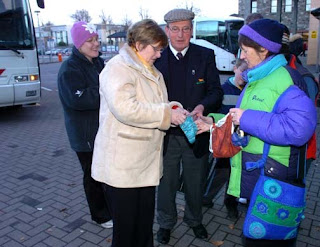 At the end of the road, Jim's wife wanted to see what I had been knitting on so busily during the bus trip. 'Well I've never seen socks done on circular needles before,' she observed in puzzlement. I told her where she could buy some, and I hope she does. 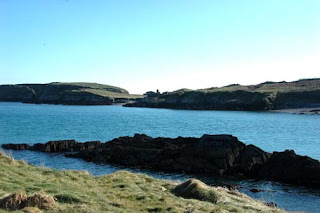 No time to tell you just now about this enchanted little lost island. I promise I'll give you all the details in the next posting. Do you know the film, Secret of Roan Inish? Well that might have been set in Donegal, but this place is an absolute dead ringer for it. Read the next instalment...