We were talking some time back - it was probably last year - about old roads and how powerful they can be. I was referring in particular then to the Gearagh, an ancient post-glacial alluvial forest, flooded by a hydro-electric scheme, and how its old pathways can sometimes reappear in dry periods.
That's only a mile or so away, but I realised rather tardily this morning, as I went down through the orchard to see how the fruit blossom was doing (chilly for May as yet, they need a watchful eye, although I've never tried that country remedy of lighting little brush fires on frosty nights to protect their delicate petals), that I have entirely omitted to let you into a rather nice secret. Some people claim to have fairies at the bottom of their garden - Celtic Memory has an old road. Yes, a genuine stretch of old boreen, running right along the boundary. You cross the lawns, go under the rose arch, through the long grass of the orchard, and down to the fence. It's shadowy there, under the overhanging trees, but peek down about a 6' drop and what do you see? 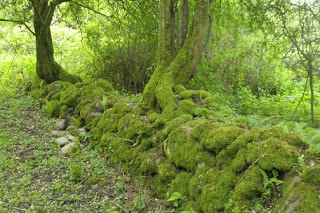 That wall once bordered the busy little highway to Macroom. Donkeys pulling cartloads of turf, black-cloaked women taking butter to the market, herds of cattle and flocks of sheep, all made their way on the old route. The new, wider road, more suitable for fast cars and big trucks, is about forty or fifty feet beyond. The trees have grown up, and you would never know this little stretch of the old road was here unless you happened to come down into my orchard and look over the fence. Which you are very welcome to do if you are passing. I like to think that at night, if you go and stand very quietly in the orchard, leaning on an apple tree (their magic is just as powerful as that of rowan, and that's why they're planted in so many old hedgerows and boundaries), you just might hear the soft tapping of a donkey's neat hooves or the trudging of a tired woman of the roads with her heavy basket. Surely old roads must retain memories of all they have seen, all those who have passed by?

We're pretty rich in this particular corner with highways of former days in fact - across the main road, there's a stretch of another one to be seen - the route that branched off from mine and headed out across a valley, now hidden beneath a lake. 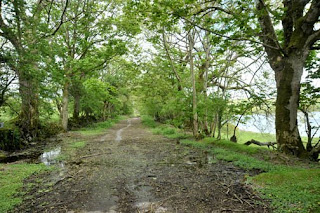 You could walk along this for half a mile or so, but after that you would need a wet suit and breathing apparatus as there is a fairly deep stretch of water between you and Macroom. Denis Murphy's farm is up to the left, and his sheep often gather down here at night or on warm summer days, enjoying the peaceful shade. Nice to have so many vestiges of the older, slower world still there to be found, if you take the trouble to look for them. 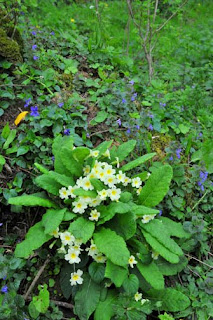 The primroses and violets are blooming all along these old ways now, undisturbed by traffic. 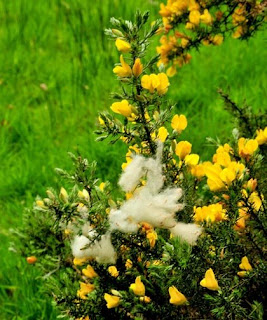 Out on the lakeshore, the gorse is in full bloom, and if it's a warm sunshiny day, you can get that delicious coconut scent from its flowers. (Did try to make gorse wine once or twice, but since you have to add grape concentrate, raisins, and dozens of other rich encouragements, you do wonder what part the gorse blossoms play in the preparation at all, if any. Maybe it's just the thought that counts.) Tufts of wool caught on the thorny branches tempt you to gather pocketsful and take them home to spin. When I was learning that craft, a long time ago in England's West Country, I was told very severely that this hedgerow fleece was no good at all and should not even be gathered. If it hadn't been cut directly from the sheep, then it wasn't worth using. Well, I was in fairly penurious circumstances at the time and my Irish heritage wouldn't let me leave such generous offerings unheeded (I'll even pick up dry branches laid on the road in front of me by the wood spirits, and say 'Thank you' for good measure.) I gathered lots and lots of the tufts I found on the Devon moors and it was just fine for spinning. Made several Christmas gift scarves with it. Just goes to show you can't believe everything you're told by the experts.
If you're quiet enough on these rambles, and stay in the shadow of the trees, you might be lucky enough to spot some of the residents going about their business. 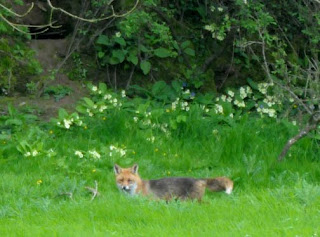 Mr. Tod on his way to the fast food outlet at the local chicken run (or possibly Mrs. Tod going shopping, although this chap looks too resplendent to be an exhausted mother in springtime). 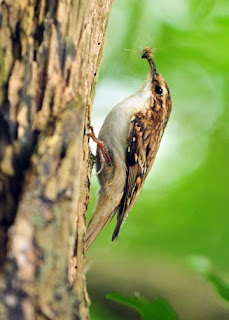 A treecreeper bringing food to its own young family 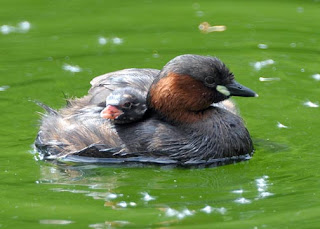 and out on the lake, a proud mama little grebe taking her firstborn for a nice swim in the sun.
DH was very excited about the fox and went off for the afternoon in the car to a spot by a grassy bank where he could park and sit very quietly with the big lens positioned at the window. He figured that where there was one, there could be more, and probably, in May, some babies as well.
He said it was a long afternoon, as he waited, afraid even to move an inch or change position, but in the end it was worth it. 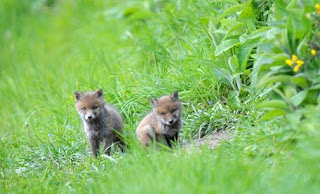 Two curious little fox cubs came out to regard the car gravely, wondering what this strange shiny monster might be.
It was a warm day, and after a while, the temptation to fall asleep was overwhelming, said DH. But that was all right, since everybody felt the same. 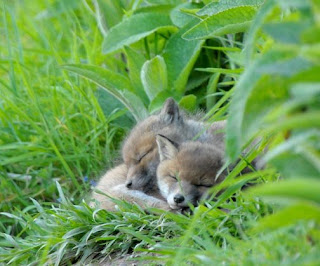 Meanwhile, back at the ranch, Celtic Memory was busy dyeing up some new yarns - both sockweight and a new blend, cashmere silk laceweight. 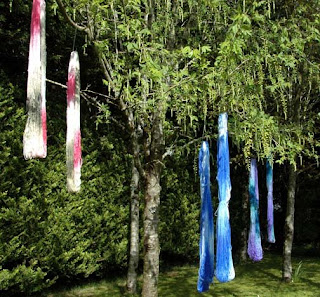 Left to right, we have merino/tencel in Apple Blossom, pure merino superwash in Bluebell Woods, and right down there in the shadows, cashmere/silk laceweight in Mermaid's Garden.
Dyeing them up and hanging them in the grove to dry doesn't take all that long - it's the listing on eBay that can take forever. Perhaps it's because we're right at the end of the possibility line for broadband here, and the connection isn't always as fast as it could be. These days, a project is always in hand so that a few rows can be put in while waiting for a page to refresh. Surprising how much you can get done that way. Next to me now as I type are a pair of tube socks (tube worked on the sock machine, tops, toes, and heels worked by hand) in bright red, plus the latest new excitement, the start of a cropped, heavily cabled little jacket top, with side and back slits, something after the style of Elsebeth Lavold's Ragna, in blue mousse merino. 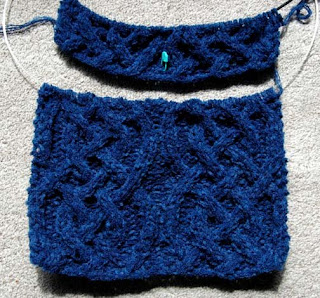 Here you can see the first panel for the back, and the second in progress above it. They, and the panel for each front, will be joined after two pattern repeats to work to the armhole shaping and after that we'll see. Maybe an Elizabeth Zimmermann raglan decrease to bring the whole thing in to the neckline, including sleeves worked in the round up to the same point (might put a sleeve slit in too).
That mousse is quadrupled to bring it up to chunky weight - not in the mood for millions of stitches right now, want quick gratification.
Which way of thinking is of course because we've just finished Round Four of Sock Madness 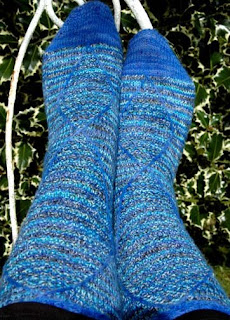 Lucky Diamond, designed for Round 4 of Sock Madness by Melissa Goodale.
and although the design was delightful and the result very happy indeed, these fingers don't want to see tiny stitches and endless rounds for another while. Not in fierce competition anyway (you wouldn't believe how fast some of these speedsters knit, especially the Norwegians!)

UK Ravelry Day is on June 6 in Coventry and you wouldn't believe how difficult it is to arrange a quick there-and-back-in-a-day, which is the method of travel most favoured by Celtic Memory. To put it succintly, you can't. Having explored all the options, including camel train to Ulan Bator, onward donkey to Ladakh, flight to Gander and connecting flight to the Outer Hebrides, finally accepted the inevitable and made a long weekend of it. Still, people like Northernlace are genuinely making major multiple-stop trips to get there (Kirkwall to Inverness and onward, anyone?) so CM can hardly complain at having to use Aer Lingus, get in on Friday afternoon, and not leave until Sunday afternoon, since our national airline clearly doesn't believe anybody needs to travel to Birmingham on a Saturday. Added to which, they have the lowest weight allowance for cabin baggage of any short-haul airline I know (half that of Ryanair), which further adds to the load of Celtic grievance. Large raincoats with tons of poachers' pockets are clearly indicated, to assist the carefully-measured, regulation size rucksack, and never mind that it will be June.

Cold enough for May right now, though. The flowers are emerging, as are the young leaves, since they really can't leave it any longer, but they haven't got that vigorous spring in their step that we find when it's muggy warm and damp as it usually should be at this time of year. The clematis is spectacular though, and one particularly energetic plant in the back garden gives me joy every time I look at it. I had fully intended to trim this very tall tree in the hedge last winter but didn't get round to it (knitting or something), and when I saw how the clematis had used it, I was very glad I hadn't. 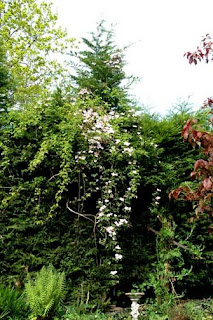 Can you see how it's climbed right up and thrown its sprays around the very top of the tree? Do you know what it reminds me of? That famous portrait of the Empress Elisabeth of Austria (Sissi) with diamonds in her hair. Let me see if I can find an image. 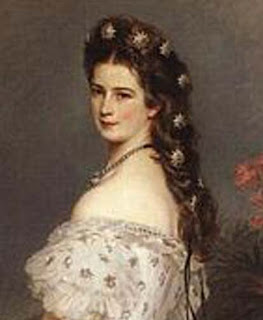 Yes, here's one. Well, I can see the comparison anyway. Always wanted a climber to create that effect on a dark tree, and now the clematis has done it for me. Thank you, clematis!

The lily of the valley, with their seductive scent, are blooming too, recalling memories of First Communions and confirmations when our veils were garlanded with the little perfumed bells. Picked a little bunch to keep on the desktop, to remind me that this is Maytime. 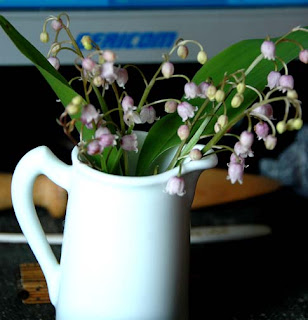 I hope the flowers are blooming for you too. Or if you are still shivering in winter, that they are nevertheless there, just underneath the ground, waiting to gladden your heart when warmer weather returns.
Posted by Jo at Celtic Memory Yarns at 12:31 pm 36 comments: