You know the kind of place I mean. Where life seems to be continuing in another time warp, a far off century, and as you discover it, wander through its quiet spaces, you find yourself tiptoeing, listening for voices of other times, echoes of the past. There actually are long-ago places still to be found, and you can get to them if you go looking. As we did one day last week when at last the grey clouds gave way to sunshine. A chilly wind with it, but at least sunshine. So we headed for absolutely the best place to go when you want to forget all about traffic jams and roadworks and crowded city streets, the Black Valley. It's hidden in the mountains between Killarney and Kenmare and you can really only get there by letting it happen.


We stopped by Muckross on the way past the lakes of Killarney, and were lucky enough to see the native red deer also enjoying the rare November sunshine quite close to the road. 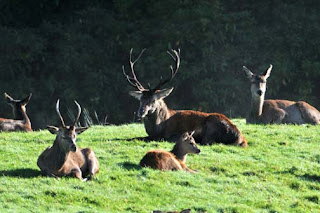 These are really shy creatures, our red deer. You will often see sika or fallow ambling through the woods, but these magnificent animals normally inhabit the high inaccessible mountainsides, only venturing slightly closer to human habitation in the winter months. So a good view of them near to the road put DH in excellent humour.

That good humour nearly hit a severe test when we finally reached Moll's Gap, the draughty cleft at the very top of the pass where a wonderful cafe (a real Last Homely House if there ever was one) provides sustenance to exhausted travellers. In previous years it has closed after Hallow-E'en and I only remembered this as the car growled the last half mile in low gear. Oh horror! No hot coffee? No jam and cream scones? What would DH say? I crossed my fingers, and Sophy Wackles' paws too, for good luck, and held my breath.

All was well! The Avoca Cafe (which also has a splendiferous shop, selling all kinds of knitwear and jewellery and titbits) had most sensibly decided to stay open until Christmas, and had decorated its windows in festive manner to say so. Thank heaven in a crazy world for small delights like this! The view from its windows over the mountains is heartstopping.


Refreshed (and yes, we kept some raisins from the scones for Sophy Wackles, sulking in the car) we put the car in gear, pointed it sort of west, and hoped that once more the hidden path to the valley would be open. It was. Without really seeing how it happened the car was suddenly no longer on the main road, but bouncing down a steep little boreen which twisted between grey rocks and furze bushes, carrying you ever further from the everyday world. If you were very alert and organised (the kind of person who folds maps perfectly, and has a tick-list for every moment of the day, every point of interest) you probably wouldn't have a hope of getting on to that hidden road. It has, as I've said before, to happen by chance.


And so we came down at last to the Black Valley. 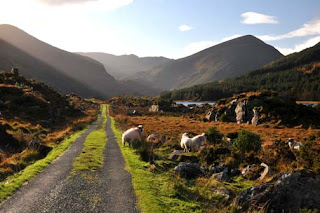 See what I mean about a long-ago world? This boreen surely has only known black-cloaked countrywomen carrying baskets of butter and eggs, the occasional creaking cartload of turf cut from the bog. Traffic lights? Bus lanes? Gridlock? Horns, engines, exhaust fumes? Another existence. The only sound is the call of a yearling lamb or the croak of a raven floating on wide black wings from one side of the valley to the other. 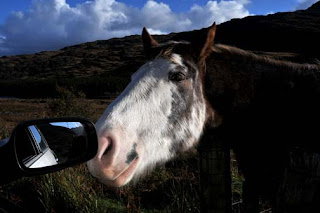 We chatted with the locals, who were pleased to pass the time of day, and then thought we had better find a drink for Sophy Wackles. 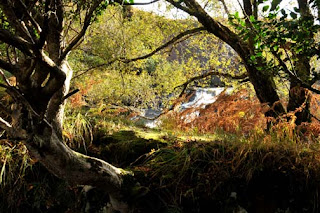 There is something deep-rooted, atavistic, in pushing underneath the overhanging boughs of ancient trees and glimpsing running water up ahead. You almost instinctively pause before leaving the shelter of the woods and check the open ground to see who or what is there, who has found this vital source before you. So must our ancestors have done, thousands of years ago, and we still retain some vestige of those survival instincts. You can't help but wonder how much of the old ways we have forgotten. Maybe it is possible to redevelop, rediscover natural knowledge that was second nature to our forefathers and foremothers? Wouldn't do any harm to try anyway. Sniff the wind instead of looking at the weather forecast on TV.? Check the good or bad feeling in a building before entering? Tune in to the wellbeing of friends and family before picking up the phone or writing an email? 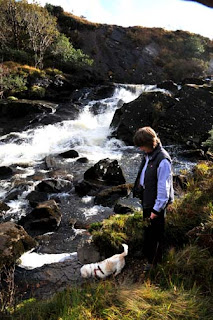 The river bank was welcoming, however, and Sophy got her drink from a side pool. The waterfall was in full explosive spate after all the rain we'd had lately. For days after a downpour the water continues to flow down from the hills and increase the river's strength considerably, so we kept the small dog well back from the main torrent. 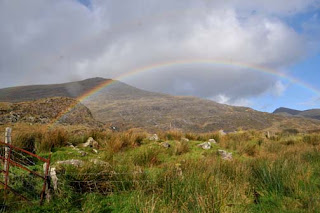 Oh look, oh look! A rainbow! Right across the valley! And it's ending right here by this rusty gate! Quick, get a spade and let's look for the crock of gold!


Thing about that legendary crock of gold, though, is that you're not meant to find it. Or if you do, you have to know what is best to be done with it. It's not like winning the lottery, it's more like a challenge to see how you will behave, how you will handle the responsibility it brings. Much better to leave it there, and make a wish on the rainbow.

The Black Valley was heavily populated at one time - as was most of Ireland - but now it's a silent place, with only faint traces of its history to be found. That was one reason we had come here at the ending of the year - it's much easier to discover those echoes of the past in the low sunlight of winter. 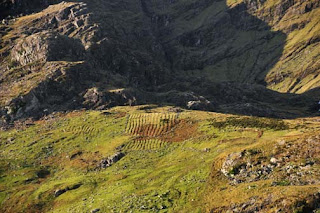 Can you see those traces of old lazybeds, way up there on the hillside, just below the mountain shadow? Lazybeds is rather a misnomer - these were the hardest work possible. When there were too many people competing for the good land, others had to move further and further up into the barren ground to grow their food. The soil was far thinner here, and so they gathered what earth they could and piled it in little ridges, just high enough to grow the potato crop. Those people have long gone, but the outline of the backbreaking, heartbreaking ridges remains, thrown into relief by the cold sunlight of November. 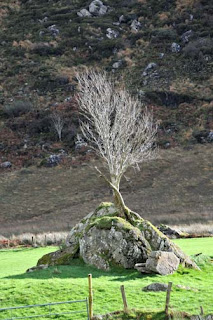 And look at this lone tree atop that great grey rock, its strong wiry roots spreading down deep and holding firm against the winds which howl down this valley in winter. There is an ancient belief in Ireland that the Cailleach Beara, or the Wise Woman sometimes transforms herself into a thorn tree atop a rock, and there watches silently over her people and her land. Go out to this valley on a dark stormy night at the full of the moon, and you might see her float from her rock and ride the wind across the Reeks to the ocean, there to tryst with Manannán mac Lir.

Here is the picture, though, that I carried away in my mind's eye, and now want to share with you. 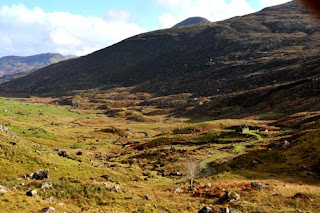 Look at that. Can you see the tiny ruined cottage, at the end of a winding green lane, at the right hand side of the picture? Click on it if you can't, and it should come up in a larger format. Doesn't it tug at your heartstrings? The mountains to its back, and the entire valley opening out from its front door, stretching for miles, right to the Lakes of Killarney. What was it like to live there? Was it exhausting, draining, poverty-stricken? Or did they love their home and its surroundings and its simple serene lifestyle with a deep heartfelt love? Did they survive the Famine and if so, did they travel far across the ocean to a new world, one of rush and noise and crowds and anonymity? And in the blessed quiet of the night, did they often think back to the Black Valley and wonder if the stream still fell with a musical note past their cottage there?


Now that I look at the picture again, I see there is a thorn tree guarding the green lane leading to the homestead. Perhaps the Cailleach is keeping an eye on it, until such time as the family returns to its roots.

When De Next Book is done (deadline next February!!!) we are both deeply drawn to doing one called Echoes of the Past. And this lonely little cottage will be in it.