It was something we had always intended to do, one day.  But there were always other countries, far-off places to discover, strange paths to tread, and so it was put off and put off.  However, last month we finally did it.  On a fine July morning we left West Cork, travelled diagonally the whole length of Ireland, caught a ferry across to Scotland, drove up past Glasgow, and took a left turn for the sea.  We were on the Road to the Isles.  And not just the near isles but the furthest ones - the Outer Hebrides.  (That's if you discount St Kilda which is so far out, and so difficult of access that is really isn't funny.)

Some idea of the distance can be gauged from the fact that even when you'd got, at last, to the jumping-off point at the busy and jolly little harbour of Oban, the ferry (oh wonderful Caledonian MacBrayne, how nice to see you again, haven't been with you since student hitchhiking days) took a full five and a half hours to reach the tiny island of Barra, southernmost of the inhabited Outer Hebrides. 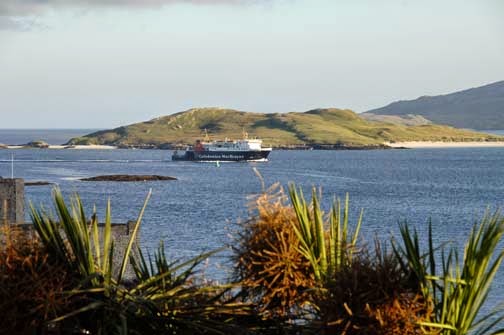 The hotel's dining room looked right out over the harbour at Castlebay and you could watch the morning ferry docking while enjoying a full Scottish breakfast (very sustaining and ideal to keep you going for the day.)

On the tiny island of Vatersay to the south, linked to Barra by a short stone causeway, the ground was a carpet of wild flowers.  Really.  It is the first time in my life I  have actually walked on carpets of orchids. 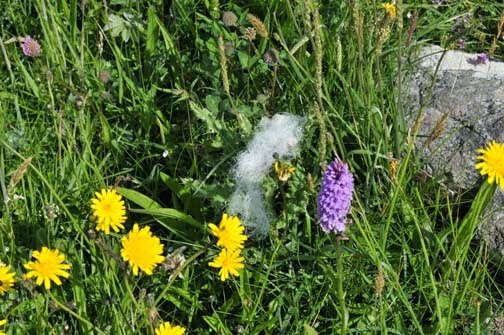 It has a lot to do with the remoteness of these little islands and their reliance on old-fashioned traditional farming methods.  No weedkillers or chemical fertilisers here, just nature and plenty of time.

Was particularly excited at getting to Barra for two reasons:  one, it was the home of Sir Compton MacKenzie, the noted writer (his famous Whisky Galore was made into a film here), and two, it is the only scheduled air service in the world that has to take account of the tides. 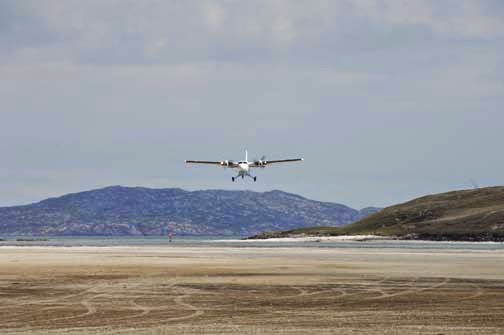 Here is the 12.30 from Glasgow coming in to the beach.  What a way to arrive in the Hebrides! 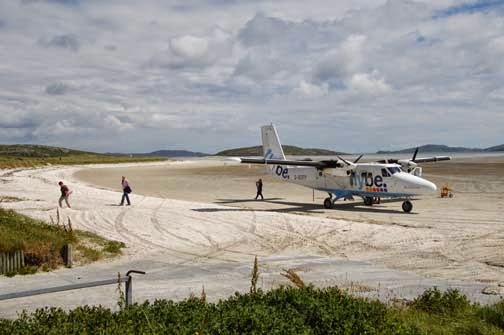 It was lovely to see the passengers disembarking and hauling their bags up to the tiny terminal.  Friends who had come to meet them in jeeps (four wheel drive is a distinct advantage here) called and waved as they came into view behind the plane, and then whisked them off to exchange gossip and chat at their holiday homes.

The Tour de Fleece was in full swing during this trip, by the way;  for those of you not on Ravelry, this is a spinning event which runs in conjunction with the Tour de France and requires you to spin every day.  It wasn't really practicable for me to take along a wheel so I made good use of a tiny lightweight drop spindle whenever I got the chance. 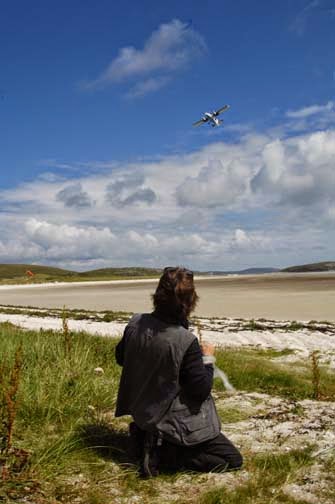 That included waiting to see the flight take off again from Barra beach.  After all, how often do you get an experience like that?  I know the breeze and the sunshine and the white sand and the sky and the effortless soaring of the tiny plane are all twisted into the yarn I made that morning.

Island-hopping was the keynote of the trip.  To get across to Eriskay, we had to drive at least twenty miles up across Barra to catch a really tiny ferry.  But then, Eriskay is a really tiny island.  About three miles long by one mile wide.  Change up a gear in the car and you'll be off the other end before you realise it.  So green and gold, so sunshiny when we were there, so adorable.

This is the Prince's Beach, because it was here, on this white stretch of sand that Bonnie Prince Charlie landed, in his ill-fated attempt to establish his right to the English throne.  And it was from Benbecula, a little further up the island chain, that he eventually managed to escape imprisonment and almost certain death with the aid of Flora MacDonald who disguised him as her Irish spinning maid, Betty Burke, and brought him to Skye.

Carry the lad that's born to be king
Over the sea to Skye...

The island is also home to the sturdy little Eriskay pony, said to be the ancestor of the Icelandic version.  Now that I've seen both, I can well believe it.  Small, but tough, as they need to be to survive here, with wonderful manes and tails. 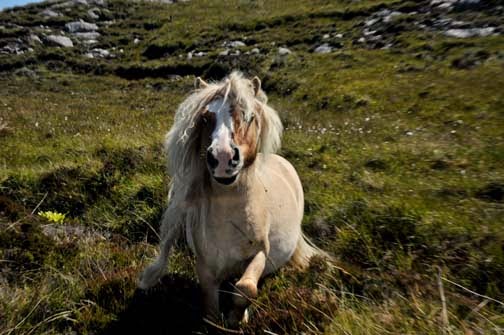 This little fellow was busy seeing off a pretender to his throne.  Once he had chased the miscreant across the hills, he came back to see if we were going to make trouble.  Once we had assured him of our peaceful intentions, he returned to his harem of mares, and chivvied them away to a quieter location with many snarls and nips at haunches.  Hard work being a king hereabouts. 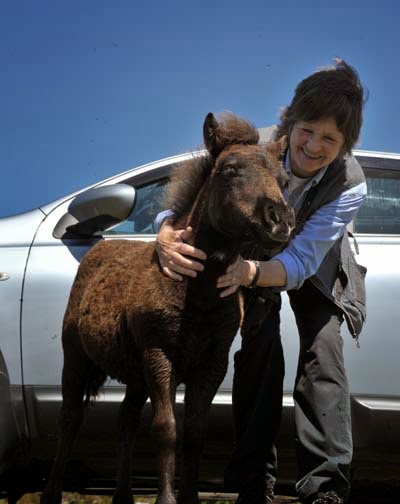 The younger members of the family, though, were extremely friendly and willing to talk about interesting things like carrots and apples.

From Eriskay you can drive across to South Uist, and then on to North Uist by another of those helpful stone causeways which are making life much easier for the islanders.  Just imagine what it must be like to have a severe toothache or a broken leg at midnight on Christmas Eve or some such inappropriate time.  Now at least they can get to another island where the necessary facilities may be available.

You can't always rely on basic creature comforts when travelling in the Western Isles.  We were yearning for coffee one morning and thought ourselves very lucky when we found this Last Homely House at Lochboisdale on South Uist. 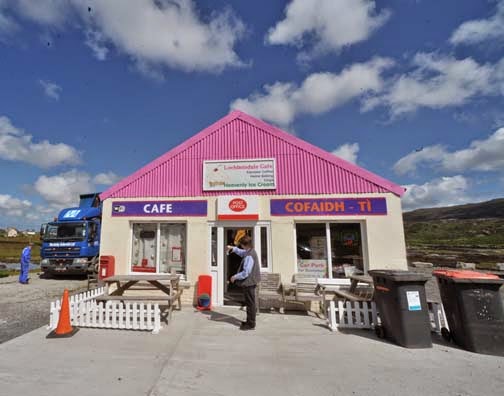 It is actually the post office, but it also managed to cram in souvenirs, knitwear, coffee, home baking, and a few other things - all in the space of a fairly restricted shed.  Very jolly though.  You would like to post your letters in a place like this, wouldn't you?

But there was evidence everywhere that it isn't always possible to live your life in the Outer Hebrides.  Ruined cottages, deserted fields, old old stone walls that now sheltered nothing.

Every time we passed one of these I would cry, 'Oh it needs someone to love it!'  Just as well we didn't have unlimited funds at our disposal.  It would have been so tempting to restore this to what it should be.

Or this tiny one by a loch?  It really does have a window at the side there, so it's a house, not a shed.  Just a new roof of split stone, some strong window glass, maybe wood panelling inside.... you think there would be room for an Aga maybe?

Look at this little tumble of stones. 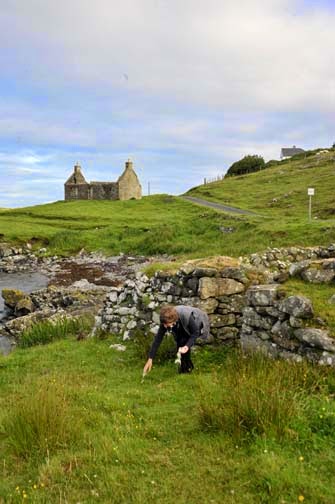 Doesn't seem much, does it?  Yet a notice nearby records that it was from this simple hut that two local women sold the very first tweed fabric ever woven on Harris.  That was back in the early 19th century.  And so of course I had to gather a few strands of fleece from around and about, to bring home. 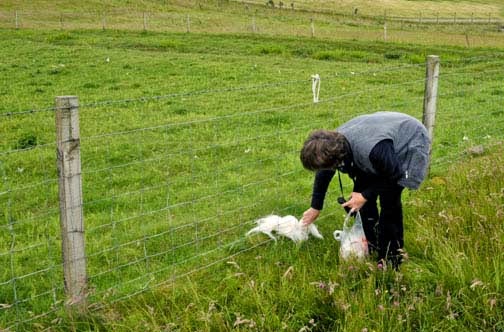 (Actually, that became a bit of a habit on the trip.  If the fleece was soaking wet - as was the case more often than not - it got spread out on the floor of the car, wherever there was a space, to dry.  Which led to a distinct but not altogether unpleasant aroma.)

From North Uist another ferry took us over to the island of Harris, which is more or less joined to the northermost Outer Hebride of Lewis. 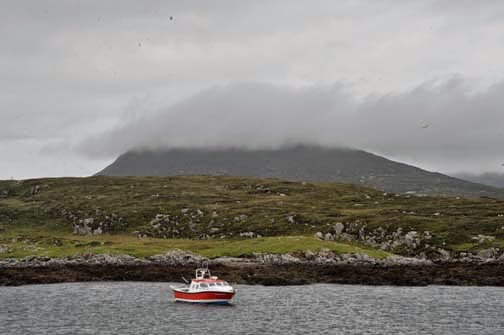 Harris is mountainous and craggy, very different to green and gold Eriskay or Barra.  And the clouds were sitting low on the mountains as we approached.  Fortunately, as always, our hosts at the guest house were warm and welcoming and it's quite fun to explore in dark gloomy weather when you know you will come back to hot tea and home made shortbread.  Plus there was always the chance you might see a golden eagle plunging down out of the grey mist (we did!)

And finally, at last, we came to Lewis and I fulfilled a lifetime ambition, that of visiting the Stones of Callanish. 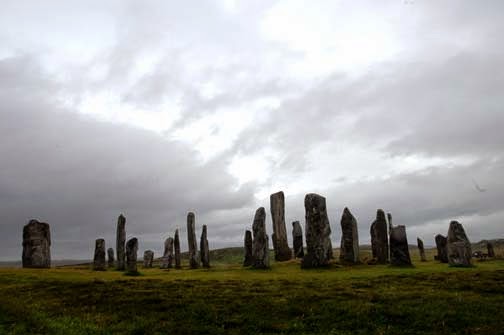 These really do take your breath away.  Out on their own, on the westernmost fringe of Lewis, gazing across the Atlantic waves, they are silently magnificent.  While the huge central stones dominate, every single outlier seemed to have a character of its own too. 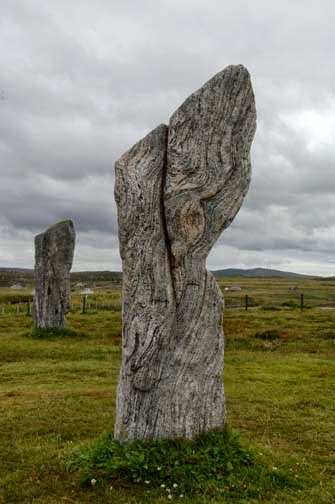 I particularly loved this one and felt that she is surely the stone embodiment of the Wise Old Woman of Callanish. 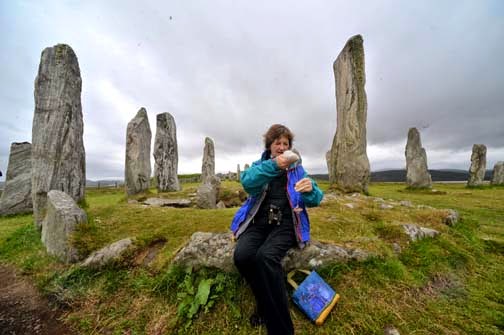 And naturally, despite a force 8 gale and driving rain, I had to incorporate some of the magic of Callanish into my spinning too. 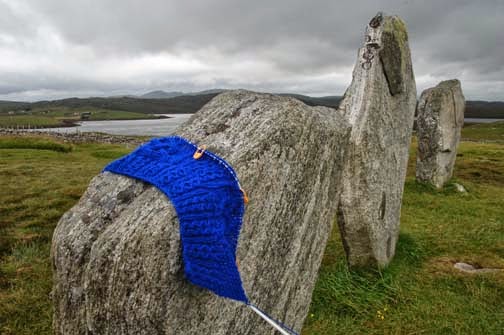 Even the St Enda Aran sweater which was specially started for the trip got its turn on one of those ancient stones, to give a good twist to the intricate cabling.  After all, the designer, Alice Starmore, lives on the Isle of Lewis, so what better place to bring it?

It was hard indeed to leave the Hebrides, but there were things to look forward to on the journey home as well.  Like visiting the old spinning mill of J. C. Rennie in Aberdeenshire. 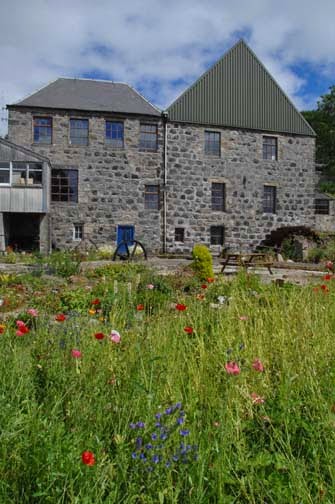 It's been here by the river in Mintlaw for generations, and the current member of the family running the business, Christian Rodland, was courteously welcoming, allowing me to run wild amid the glorious fibre treasurehouse. 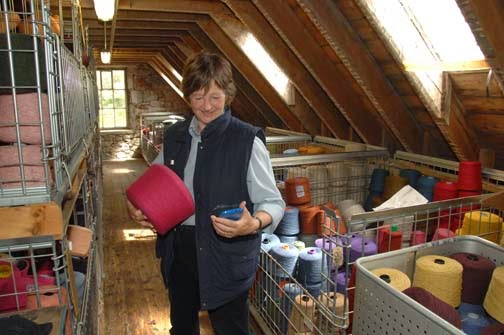 Oh the benefits of having your own car on a trip!  So many times in other countries I have had to pull back from going absolutely mad because the baggage was already crammed to bursting! On the other hand, it's less hard on the credit card if you do have a luggage limit.  Suffice it to say that the stash has been augmented more than somewhat.

And at Mintlaw we had arranged to meet up with a good friend and fellow Raveler, Aurelie, who drove up from Aberdeen  to see us. 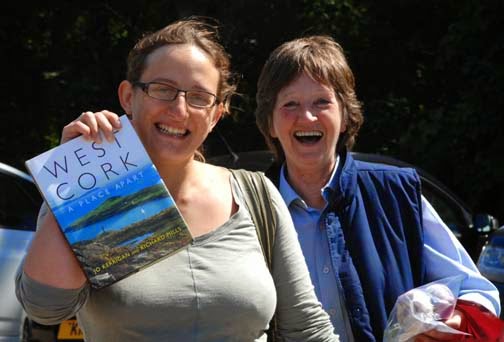 What do you know, she had brought a copy of De Book especially for us to sign!  That was a total surprise and so sweet of her.  We had a lovely time chatting over coffee, comparing our spinning for Tour de Fleece (Aurelie also was working on a mini drop spindle, but we were talking so much we forgot to take pictures!), and exchanging all the gossip.  Happy journeys indeed that end in friends meeting.

And so we retraced our steps across Scotland, across the sea, and down through Ireland to West Cork where the dogs and cats were delighted to welcome us back.  But the memories of our Hebridean odyssey will long remain. 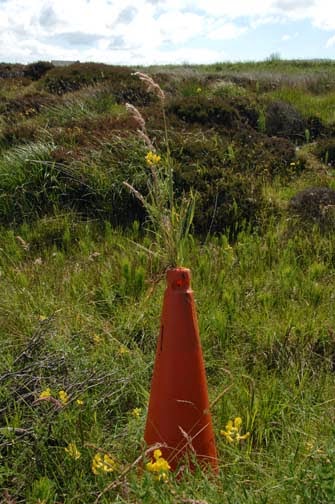 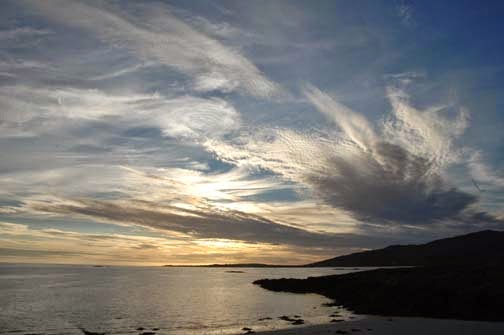 The splendour of an island sunset and cloudscape 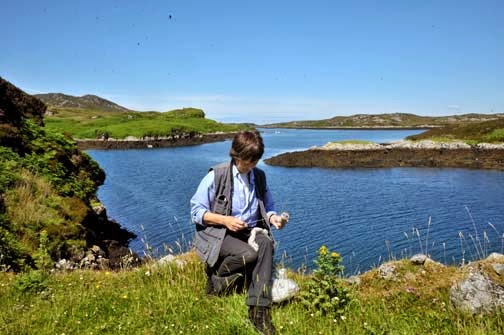 And, perhaps most of all, the tranquil beauty of another world, living on another time scale, far from cities and commerce and frantic rushing.  A good place indeed to spin your yarn.