It's May Eve: and The Old Road is revealed!

It is a long-held belief in Ireland that on May Eve the old roads make themselves visible, winding far away across the boglands, and that at midnight you may see the folk of ancient times travelling them as they did so many thousands of years ago.  Celtic Memory will certainly be out at the witching hour, to see who may pass by.

And what better time for Follow The Old Road to come out!  Yes, the new book is now in the shops and online, and it is my fervent hope that every single person who reads it will go out and explore these old roads too, rediscover how our ancestors travelled from earliest times up to the last century. 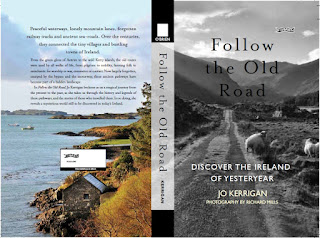 Several of you have asked how you can have your copy signed, and I have arranged this with O'Brien Press.  You do have to order from them rather than from Amazon, and make sure to put in the Comments box that you want a signed copy.  Then email me, so I can make sure your name is on there.  You'll find my contact address on the side of this page.

It was hard work researching this book but we did have such a wonderful time doing it, discovering such amazing things and such fascinating scraps of history.  I think one of my absolute favourite pictures perfectly captured by DH was that of the deep grooves cut into the stonework under an old canal bridge. 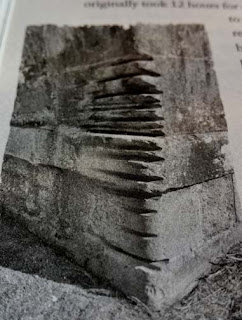 Generations of horses pulling boats along the towpath did that.  It was an old man up in the Midlands who told us to go down the bank to the old bridge and we would see them.  I never cease to thank him.  Ever after, we always went in search of them.  And always found them.  Truly tracks of time.

Well, on May Eve, spring seems to be here at last, although it is still unseasonably cold at nights.  The flowers are cautiously emerging, the baby rabbits are playing in the fields, and even The Waif is getting frisky.

You remember The Waif?  She came to us three-quarters starved and in a very bad way, a few months back.  She still wouldn't win any Beautiful Cat contests, but she is a happier little animal, no doubt about that.  One day we watched her creeping cautiously out into the rockery to enjoy the sun.  Having sniffed all around, she put out a tentative paw and patted a leaf.  DH grabbed the camera.  Next she positively smacked the leaf.  Then, in one glorious moment: 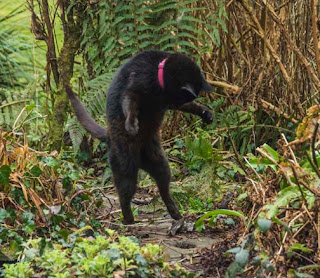 An explosion of happy exuberance!  A leap in the air to celebrate the joys of spring.  I had tears in my eyes.

A day or two later, we were surprised to see The Waif slipping through the hedge and making her way down the field behind the house.  Going back to her gipsy ways?  We hoped not.  Right down to the edge of the woods she toddled, to where dozens of rabbits were watching with suspicion.  She sat there for ages, just calmly observing them.  And then she pounced! 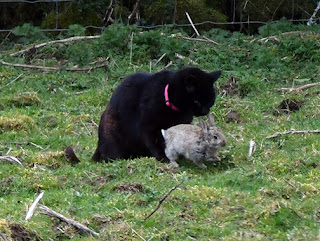 A very young baby rabbit. Far too new to the world to know what was going on.

Which actually wasn't much.  Relax, no baby rabbits were hurt in the taking of these pictures.  Remember The Waif's personal circumstances?  No teeth, apart from one lone canine sticking out at the corner of her mouth?  She held the baby in her mouth for a minute or two, considered her position, and dropped it, deciding to go for a stroll instead. 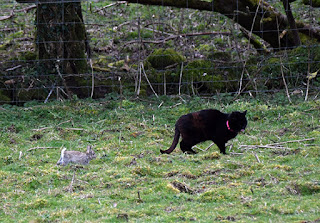 But the baby didn't want to lose sight of her!  'Are you my mummy?' it enquired plaintively, following her along the edge of the wood.  Obviously it had imprinted on her, albeit briefly, since its genuine mother now emerged furiously from concealment to rush it back into hiding.  And The Waif came peacefully home by the long route.  She had showed them that she was still there, that was the main thing. 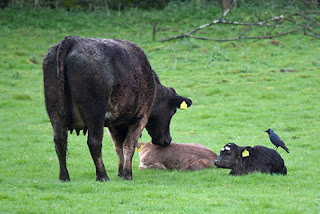 New calves have arrived too.  Here Mum is attending to one of the twins while a jackdaw seizes the opportunity to get some nice soft hair from the other, to line his nest. 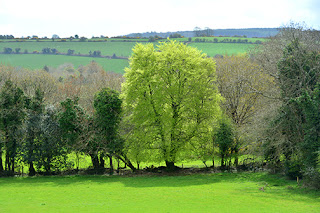 Every year we wait for this beautiful beech tree to come into leaf.  It was ahead of most of the pack this season, shaking a diaphanous see-through gown of green in the morning sun. 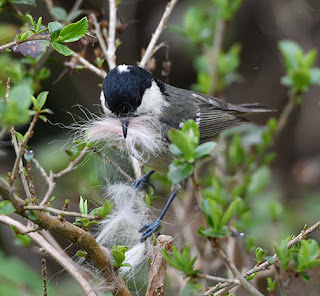 The dogs needed clipping, and that meant a bonus for the smaller birds who wouldn't dare to pluck from the back of even a very little calf. 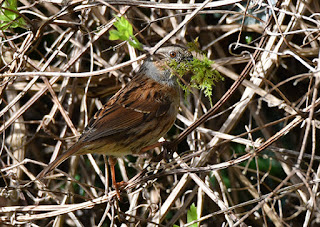 Others preferred the tried and tested nice green moss to line their nests. 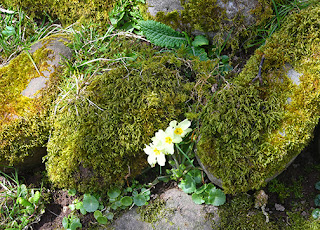 The primroses are coming out in the orchard, 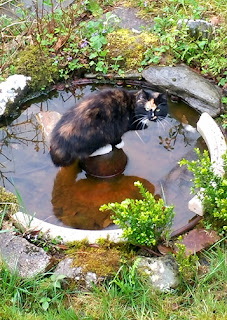 and Scheherazade is exploring new territory. 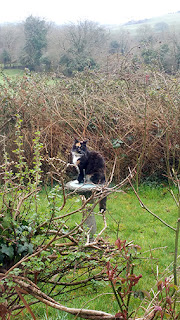 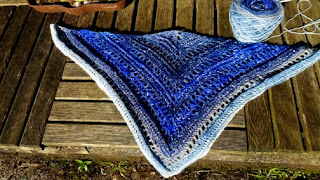 Yes, of course craftwork is continuing.  When does it not?  This is a shawl in progress called, appropriately enough, Secret Paths. 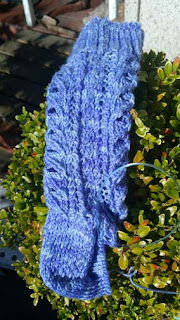 And here is the current sock in progress from Sock Madness.  Safe Harbor is its name, designed by the gifted Amy Rapp.  It has a most ingenous way of dropping rows of stitches and then gathering them up to make a bee or butterfly.  Lovely.  Out of the competition by this time (the Scandinavians, as usual, are showing Grand Prix speed) but enjoying knitting along nonetheless. 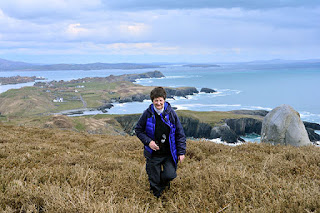 We have been down to Brow Head on the Crookhaven peninsula in West Cork.  They filmed some scenes for the newest Star Wars out on the end of Brow Head, and it was off limits for a while (with all the locals being sworn to secrecy) which was very annoying if it is one of your go-to places for serenity and recovery of resilience) but they are all gone now and it is back to its wild natural state. 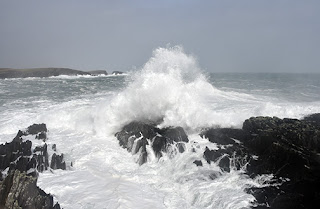 The waves were crashing on the rocks at Galley Cove, 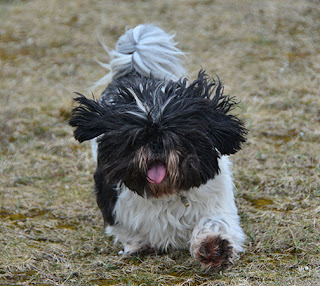 but the dogs had a wonderful time. 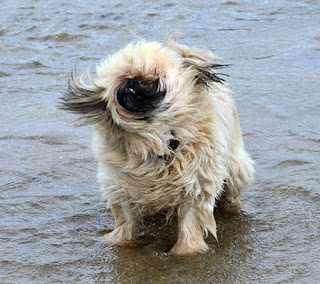 The state of the car afterwards was another matter.  'My cameras!' shrieked DH in despair.  I keep telling him to use a big rucksack to protect them from sand and seaweed but he likes to have them ready to hand to snatch up when a moment offers itself.

And so, it is May Eve.  Make sure you go outside tonight, even if not to the woods to gather great boughs of mayblossom as your ancestors did.  Look to the skies and the stars, and, if you are near open land, to the ground to see if the old roads are becoming slowly, glimmeringly, visible.  It's up to you if you follow them or not:  just be prepared to accept what happens.

And tomorrow is May Day!  Up on the Kerry border they will be bringing their farm animals to the ancient fort to drink at the well, as they have done for millennia.  Back at your own home, don't forget to wash your face in the dew, say good morning to the first bird you hear singing, and celebrate Beltane, the coming of summer. 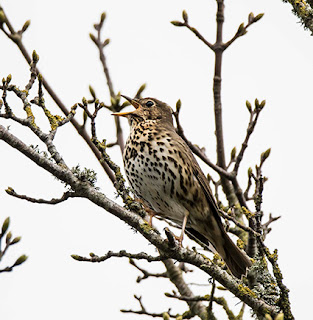