In Which Publishers Are Visited, And the Ancient Magic of Trees Rediscovered

Good morning to you! We have endured several days of wretched chilly rain and grey clouds here, days where it was almost as dark at midday as it was at midnight, and all you wanted to do was crawl back into bed and pull the patchwork quilt over your head. Spent the time skeining up Shetland yarns for eager customers (gosh, maybe it is time to start the gift knitting, do you think? Clearly some of you already have!) and trying to find where I put the half-finished Pamuya shawl so I could get ON with it.

But today - ah today is one of those for which you forgive Ireland everything! The sun is beaming in a cloudless blue sky, the fallen leaves are crisp underfoot, and there is a glittering layer of frost on everything. Distinctly chilly - I'm wearing a sheepskin jerkin I bought in the Carpathians years ago, rather too long, but I'm glad for that right now - and the dogs are coming back in after their morning beating of the bounds somewhat quicker than usual. The most basic of checks for strange intruding cats or the path a hedgehog took last night (I know, hedgehogs should be asleep by this time, but in West Cork they often potter around all year, depending on the temperature) and the dogs are gratefully back snoozing by the window in patches of sunshine 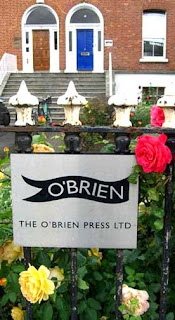 We went up to Dublin the other day, and paid a long overdue visit to this charming Georgian residence. Despite De Book, this was actually my first ever meeting with the legendary head of the publishing house, Michael O'Brien, although Richard has known him for years. We'd been emailing back and forth constantly of course (and you of all people don't need to be told how well you can get to know someone online, do you?) but now I was going to meet him in person. Loved his initial greeting: 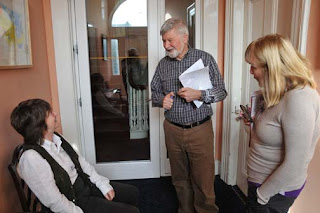 I mean, how many times do you hear that line in your life? That's the wonderful Ide on the right, our editor on De Book. She was the most amazing combination of nanny and sergeant major, able to tell from the slightest changed note in your voice whether you needed comforting and encouraging or barked orders to Get On With It. A rare blend of qualities, but essential for a good editor, and Ide's one of the best.

We went out to the local pub for a sandwich en masse, and had a great time chatting about everything and anything, and then Richard and I called into Claire's office to talk about all the signed copies being posted out to Furrin Parts. (Did I tell you how delighted and entranced they are at all the requests for personally inscribed copies for America, Canada, the UK, France, Sweden and beyond? Normally they'd have to wait for one of the giant behemoths like Amazon.com to wake up and agree to put the title into their listings, and that probably won't happen until Tibb's Eve. So, it's delighted and entranced they are and send you their love.) 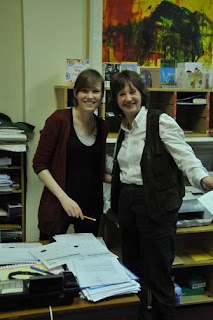 And here is the very girl who gets your online orders and sends out the books. She liaises with me on a daily basis to check for individual inscriptions, and somehow brings it all together. Claire never loses her calm, no matter how many times I bombard her with queries and forwarded questions from yourselves. Isn't it nice to see the face of the girl who sent out your copy? 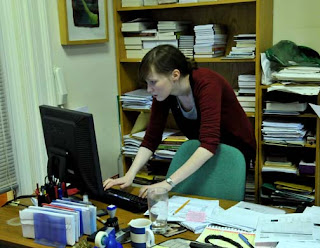 She does, however, get a little worried if a book doesn't turn up on time, as happened with one or two orders. She got on to their Irish shippers, who in turn got on to the American onward deliverers, who eventually admitted that they'd had a bit of a log jam which was now being sorted out. So don't worry, yours will be there soon. We picked up another box of books to bring home, so that we can sign any new requests as they come in, and get them back to Dublin in short order. Just make sure you email or PM me when you place the order, won't you? Otherwise I just might not know, and I'd hate that.

Then it was time for Michael O'Brien and myself to have a serious discussion about De Next Book which is, as you know, to be on our ancient Irish beliefs, customs and traditions. I'd had to send in a sample chapter for discussion at the editorial meeting which finished just as we arrived. Fortunately everyone had liked the details on the Banshee and the surprising number of actual live evidence I'd managed to garner simply by going into the little market town of Macroom and asking around. (There's more coming up on that - an old gentleman has been located who has himself heard the banshee in recent times, and an elderly lady wants to talk to me about the Little People - you'll get all the inside story here first, don't worry 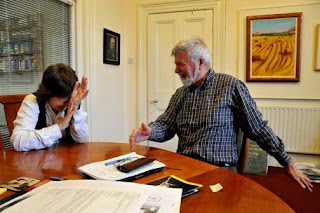 The trouble with Michael is that he is so knowledgeable and so interested in everything that you can quite easily spend a couple of hours going off after one fascinating side road or another. 'Enough!', I had to cry in the end. 'We can't possibly fit all this in! 'But we must!' insisted Michael. 'It's so interesting, and readers would love it.'

A topic on which we agreed wholeheartedly was that of trees, and the magical powers associated with them from time immemorial. And that's going to be one of the first areas to be explored more fully over the next few months. Of course in this part of the world you grow up knowing that rowans possess powerful magic, as do apple trees, hawthorn, yew and ash. When you start looking into the old books and documents, though, you discover wonderful details which somehow ring absolutely true in your mind. Do you know that feeling? You read something and immediately recognise it - as if it were something you had always known but had forgotten? That's old memory or folk memory working. We tend not to exercise this faculty too often these days, bombarded as we are with information that various monsters of communication think we ought to hear, but if we can get away to a silent place and look into the old sources, we can revive the skill

But the trees. The rowan or mountain ash is one of my favourites. 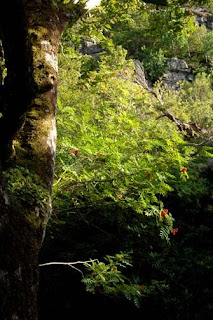 It's as happy hiding in the deep forest, among vaster leafy monarchs 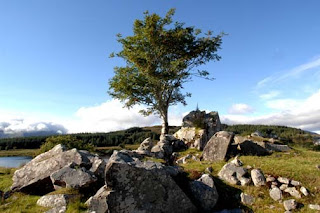 as it is clinging to a rocky mountainside. Wherever it is to be found, it's good magic. We have strong young rowan trees encircling our land, to ward off evil. Wands of rowan were used by Druids, and the berries were considered a powerful antidote against sickness and old age (you can make a rowan jelly which is excellent with meat, but I haven't tried it yet. The blackbirds get to our berries long before I do.)

And then there is the apple. Which is the lovelier or more satisfying 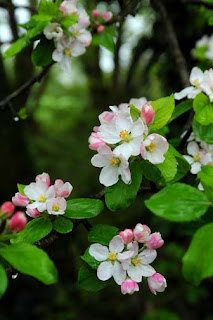 the heartrending innocence of its blossom in May? 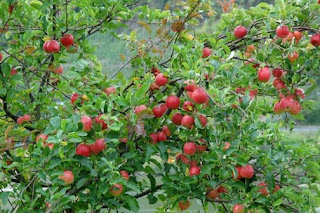 or the promise of jellies, pies and preserves contained in the glowing fruit of autumn? Apple is another powerful tree which protects and shelters, and it's always a good idea to have at least one by your home, even if it's only a miniature in a pot. If you have space, then plant an orchard. And while you're at it, try to source some of the old varieties, that are in danger of dying out through the inroads of computerised, controlled, oversprayed, overdesigned, all-of-a-size shiny products you see six-packed in supermarkets. Those abominations simply do not taste the same.

Oh, and while I think of it, I wanted to tell you that Ireland has its very own native apple type, and it's a tip rooter! That means the branches curve to the ground and take root there, just like the bramble does! That is very rare indeed. Nearly every apple tree today is propagated by grafting on to a sturdy rootstock. I must get one or two of those tip-rooters from the lovely people in the Midlands who are tracing and saving all the ancient varieties. Irish Seed Savers, that's the place.

And no, I hadn't forgotten the hawthorn, the quickthorn, the Fairy Thorn, that twisted, gnarled, indomitable survivor, bent double with the sweeping winds, yet defiantly displaying its pink or white spring blossoms and its ruby red berries of autumn. How could I? 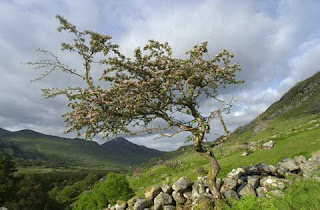 All night around the thorn tree,

And men and women passing

Will turn their heads away.

But if your heart's a child's heart

And if your eyes are clean

That grows beyond Clogheen.

Up to very recent times, you would see branches of blossoming hawthorn placed over cowshed and barn doors on May Day (Beltane), and even little sprigs tucked into horses' harness, to ward off evil spirits and bring a good and fruitful year ahead. It's often said to mark the entrance to a fairy fort and it's considered sheer folly to dig one up in case you offend the Good People. Indeed, you'll still see wide fields in the Irish countryside, beautifully ploughed and tilled, with one twisted thorn tree sticking out in the middle. No sensible farmer would remove it. I like that.

The ancient Greeks considered man to be at the very top of the developed world, and animals and trees way down the list. The Celts, in contrast, saw spiritual power in all things. I think they had the right of it, myself.