In Which Yet A Further Furry Paw Is Pleadingly Extended

Strewth, has it been raining here.  I think I may have said it before, but one is certainly grateful for the fact that Ireland - or at least West Cork - is nothing but a gigantic sponge.  Torrents pour down upon it on a daily basis, and it still manages to absorb the lot and push it somewhere down the thousands of streams which gurgle happily to the coast and swell the sea.

I was calculating this morning that it was either last March or last June that I last hung out a load of laundry under a clear blowy sky at morn and brought it all back in, nicely dried, at evening.   Oh for spring, I moaned, wandering sadly out into the soggy brown disaster that was the garden.  And then I saw something unexpected poking out of a tired mass of wet foliage in a flowerpot. 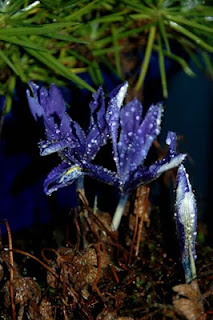 It couldn't have been a more dreary January day, but this little iris had poked its way through last summer's dead leaves and pushed up its bright little head, all covered with jewelled raindrops.  Well done little iris!  Cheered me up considerably, it did. 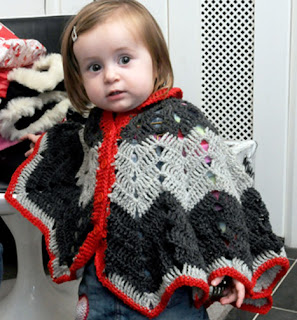 Of course dark winter days and nights are ideal for craftwork, and there has been plenty of that.  I had promised to show you that little Norwegian Angel crochet cape on its recipient and here it is.  Doesn't she look cute in it?

Once the festive gifts had been got out of the way, and still maintaining my vow of Knit From Stash, I remembered a whole pack of extremely expensive Karabella merino/yak chunky that really needed to be used up, so started the Wave Hello Knit Cardi by Melissa Monday. 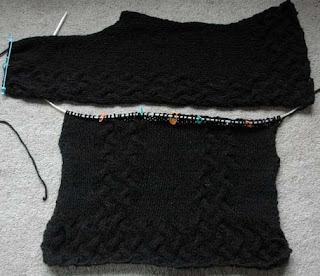 Here is Wave Hello to a Yak in progress.  I decided to continue two strips of the cabling up from the hem along the back, to give what would otherwise be plain stockinet fabric a bit of texture.  It's a really quick knit so hopefully I'll get it done before something shinier beckons. 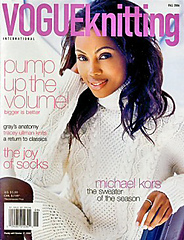 Like the Michael Kors cabled tunic, for example.  Lusted after this as soon as I saw it in Vogue Knitting some years back, but hadn't got round to it until I discovered a huge pack of Sublime cashmere/merino/silk in pure white in the stash.  What possessed me to buy so much of something so expensive in the first place I cannot now recall, but clearly it can't be left there to slumber in peace.  Will adapt of course.  The Kors design is very large and loose, and I'd prefer a fitting polo neck.  Also Aran designs should really be done with a raglan sleeve.  It looks so much neater than a drop shoulder.  Plenty of ancient pattern leaflets to hand, and I can just follow one of them for the shaping.  Suspect this will be a long-term project.  After that, the legendary St Brigid beckons yet again.  Never did find exactly the right colourway and fibre to use for that baby.  Maybe 2013 will do it?

But there have been other matters to occupy the mind (and indeed the hands) over the past week.  Oh there have indeed!  Why did nobody warn me that reaching out to lift a little frightened fur person to safety and love was extremely addictive?


Of all the auspicious times in the calendar it was New Year's Day when a friend who runs a rescue centre rang me.  As is unfortunately always the case after the festive season, she was full to overflowing with dumped, unwanted, rejected dogs.  Could I possibly consider fostering a little Shi Tzu for a few weeks, to get her back to some sense of normality and security?  For two seconds I wondered frantically what DH would say to yet another arrival, but then did the only possible thing and said, 'I'll be round in ten minutes.'  DH, bless him, rolled his eyes, laughed, and said, 'Why am I not surprised?'  That man's a keeper. One terrified, bewildered little bundle to be wrapped up warm and held snugly. Look at that expression.  Fear, mistrust, a beating heart. 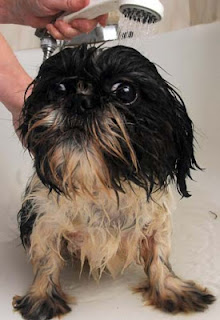 Hated upsetting her further, but she really really needed a gentle warm bath to remove at least some of the signs of serious neglect.  Before that she had had a small but nutritious meal to get started on putting some flesh on that skinny ribcage.  She would have eaten an entire pack of food if she had got the chance, and the bowl too, but you mustn't rush these things. 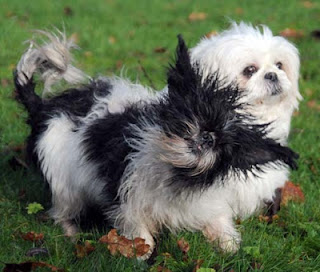 Then it was a stroll on nice green grass with Sophy Wackles, who accepted her with surprising equanimity.  Even when it meant having drops of water shaken all over you.

In fact everybody has accepted little Tamzin (or Tamsin, can't decide which spelling I prefer) extremely well. Here is a snatched picture of one corner of my small study at this precise moment.  On the chair, Pollywog and Podge.  On the floor, Tamzsie and Sophy.  Barely enough room for me! 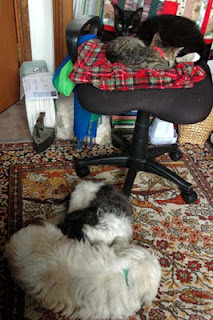 It's going to take time.  (Fostering, fostering?  What nonsense is that?  She ain't goin' nowhere, isn't Tamsie!)  She still won't come readily to your hand, and tends to cringe if you stoop down to her unexpectedly from above.  Sudden noises or raised voices send her into a huddled terrified heap.  The contrast with Madam Sophy, spoiled and petted from birth, is distressing.  But we're getting there.  And DH is enjoying every moment of photographing her gradual dawning confidence, as she explores the garden on her own, discovers how to get down stairs (bounding up was no problem, but oh help, what do I do next?) and, just now and again, a very rare lick to a friendly hand that she is learning to trust.

So very very glad we were there at the right moment, Tamsin.  Already we can't imagine life without your whiskery little face.  And when the spring comes, you won't believe what a wonderful wide world there is out there to enjoy!