Can't exactly see the lengthening of the days yet, although I've been watching keenly since the Solstice. Soon, I know, it will be impossible to sleep beyond six in the morning, what with the bright skies and the carolling birds, but right now it's difficult to dig oneself out of the duvet much before eight, which is when a grudgingly paling sky indicates that the sun might just, might just condescend to climb up over the horizon in half an hour or so

But it's February 1 and the first little yellow crocus is showing bravely by the driveway. Mind you, it's likely to be blasted brutally for its promptness by the icy winds currently powering in from Mother Russia, but it is lovely to see anyway.

We celebrate Imbolc around now (today or tomorrow depending on your mood), also known as Candlemas. It's the Celtic festival of spring, marking the birth of new lambs, the consequent renewed supply of good sustaining milk, and the first shoots of brilliant green promising food for all in the months ahead. It's the month of the goddess Brigit (male-dominated Christianity couldn't obliterate her, so they changed her into the meeker St. Brigid, but the Irish went on venerating her just the same as they had always done). On Brigit's day, you are not supposed to spin or weave or do anything that involves twisting fibre. Probably means no knitting either. But you do display Brigit's Cross, made of green rushes, and if you are far-thinking, you put out a piece of cloth on Brigit's Eve and bring it in next morning, when it will have received great healing powers and will be known throughout the year as Brigit's Cloak.

Celtic Memory spent the morning finishing up the new Magic Skein, called of course Brigit. Each time I make one of these I vow 'never again' but then another lovely festival comes up on the calendar and the colours call, and the yarn beckons, and it's another session of complete chaos in the upstairs sitting room with cones and balls and tangles everywhere, the scissors disappearing with irritating regularity, and the dogs wailing mournfully outside (can't understand why Maman is shutting herself away and shrieking, 'What goes with this? No, that one won't do! This one? Nope. Ah - that looks better...) 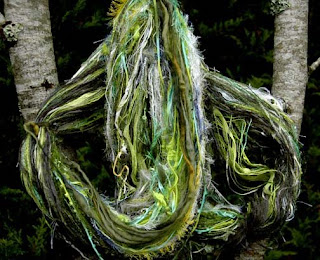 Here is Brigit in the grove. Can't do much about the grey day, but the yarn skein is a good emblem of the growth to come, I think. 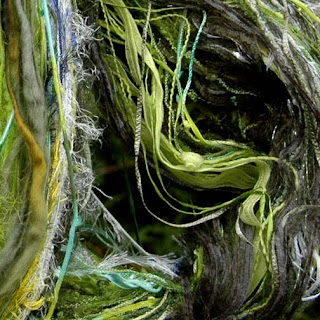 There must be eighteen or twenty different combinations in this one 285 yd skein, and each combination has up to four strands of different yarns. Tidying up the sitting room has been conveniently forgotten for the moment. Listed it on eBay this afternoon (Item ID 170299134144 if you're looking for it).
I've had several emails requesting more pictures of the traditional craftwork discovered in Bulgaria, so uploaded some more of DH's images for your delectation. Yes, the last post was only yesterday, but it was so exhausting that another one was essential, otherwise Celtic Memory might get a hang-up about it and never post again. Like getting back on a horse after being thrown. 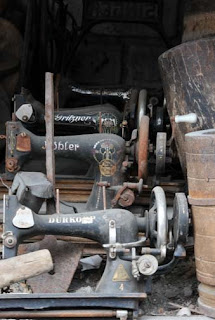 Here are some of those lovely hand-cranked sewing machines that I had to leave behind, all with unfamiliar names to me (one suspects that Singer really made them all, and the local man simply slapped on his gold transfer, what do you think?) As a reminder of who's boss, there is a big Singer table-mounted machine looming dimly up at the back.

Gosh, just looking at those makes me want to grab a truck and drive right back across Europe. 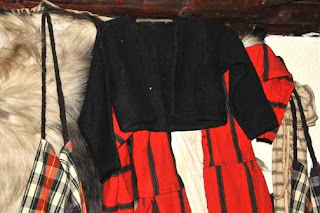 Here's a beautiful felted jacket, with a traditional overdress hanging behind it. This was in the cafe at Narechenski Bani. And no, it wasn't for sale. 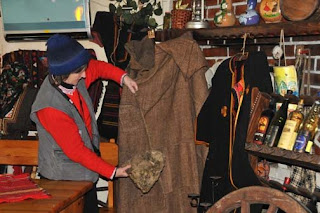 Nor was this roughly-woven shepherd's cloak in homespun, with its matching well-worn cap in what looked like raw sheepskin. 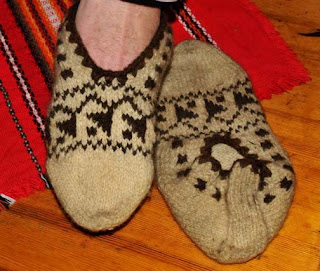 And look at these lovely knitted slippers or shoe liners. I put my hand into one, to round it out, and placed the other so you could see the shaping of the heel.

I know they're shoe liners because when we met those lovely knitting ladies up in the mountains, I noticed they all had them inside their rough outdoor footwear. 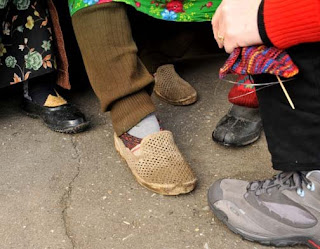 The lady in the foreground had warm thermals under her dress (you can be sure Celtic Memory had the same under her serviceable travel trousers in that icy climate), as well as the knitted slippers over socks or stockings. The lady on the right of the picture was resting her foot outside her shoe, and kindly agreed to let DH capture that for the record too. 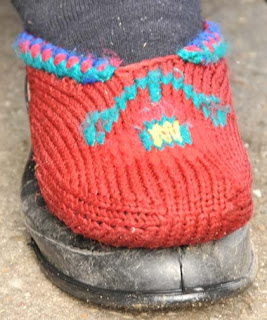 Isn't that a nice design? The cuff looks like it might be crocheted (thanks Ana for the comment on my last posting, telling me about the way those hooked needles are used - isn't the Internet amazing?)
And to think I thought those trendy new winter liners for Crocs were an ingenious modern invention! Nothing new under the sun... 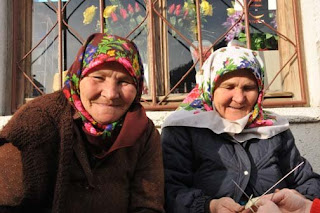 By the way, thought you might like to see these lovely Bulgarian knitters at closer quarters.
I'd like to meet them again. More than anything, I wish I had fluent Bulgarian so I could talk to them about their lives, what they'd seen, the crafts they and their menfolk still practised, everything. It gets so frustrating when you can't really exchange thoughts, doesn't it? Ana, maybe you'd go talk to them for me - no, for all of us?
I'll finish with what is probably my favourite picture of the whole trip. 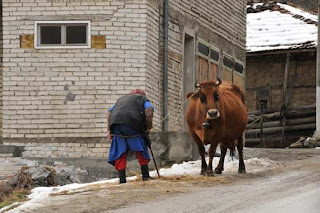 This was in the village of Yugovo and was one of those instantaneous, 'get-it-now-or-lose-it' shots that DH grabbed through the windscreen. The lady in the traditional blue and red had found some spilled hay on the roadside and was scraping it together with her stick so that her clearly cherished cow could enjoy an unexpected luxury. A moment later they had trudged off together down a muddy track to her little house where I just know the cow had a comfortable warm stall close to the kitchen.
Looking at it makes me think that maybe we all need to get back to the basics a little more. Remind ourselves of what's really important.
Posted by Jo at Celtic Memory Yarns at 5:24 pm 24 comments: