At this time of year, there is always a great deal of crafting and planning and packaging and general kerfuffle as we create gifts that we hope the recipients will love. 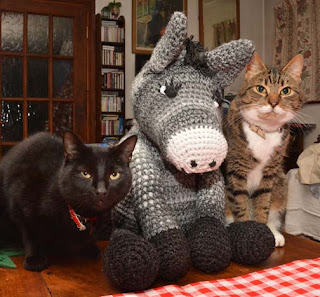 This donkey took a surprisingly long time to make and swallowed so much stuffing you wouldn't believe it.  I didn't want to make him too hard and solid, because he was intended for a very small little boy, but he was still greedy for more and more filling, no matter how much I crammed in.  Polliwog and Paudge Mogeely reserved their opinion on him, and positively encouraged me to get to the post office with the bulky package at the earliest possible convenience. 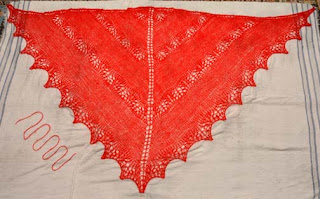 Once Mr Donkey had headed off, it was time to complete this scarlet shawl (it's Shaelyn, if you're looking for the pattern) in a fine mohair blend.  I was beginning to worry that I wouldn't have enough yarn to finish the bind off, and just look at the few inches surplus, down there on the left hand side!  That was finished on a wing and a prayer.  It was sent off to a dear friend on whom it will look spectacular.  She has promised to send me a picture of herself wearing it.

And then, it being December, there was the very pleasant annual ritual of the Advent Scarf.  Every year a large number of us around the globe get together to knit this scarf which is different every year.  A new clue is sent out each morning.  The idea is that you spend a little time in a peaceful way, knitting on that day's section and relaxing before real life butts in.  It's designed and run by patient and hardworking moderator Zemy, who is always understanding of panics and problems and there to help.

But she couldn't help with this one.

Here is my scarf, after Day 2 was completed. 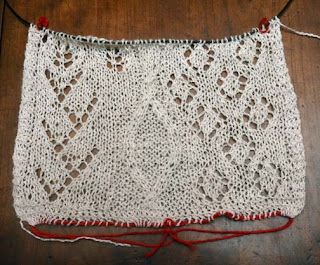 You can see Estonian lace patterns on either side, and a cable shaping up in the middle.  It's beginning to look really beautiful, isn't it?  I had done a provisional cast-on, so that I could join both ends of the finished piece neatly, and have a looped infinity scarf to show off at Christmas.

But I reckoned without this devilish little fiend. 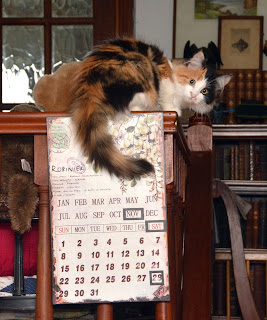 Yes, angelic little Marigold Rusalka.  I should have anticipated what was coming when I saw her sitting on the banister above the daily calendar, clearly waiting for the knitalong to start.  But I was busy.  Too much to think about, too much to do.

Each morning, after I had finished, I rolled the knitting up in its bag and then, for safety, put the bag under some books.  Should be safe there, I thought.

I came down from my study that second evening to find a ghastly sight spread across the floor of the living room.  No, I don't have photographs.  It was too awful a situation.  The yarn, I should perhaps mention, was a very rare and beautiful cashmere/silk blend in softest cream.  I had a big squishy ball of it, carefully wound.

Or rather I had had.  Now it was a wild and widespread tangle of loops and knots and exuberant weaving experiments, around the legs of chairs and tables, in and out, round and about.  And dearest little Marigold lay contentedly on top.

Some of us become stronger through challenges like this.  I didn't.  I lifted the kitten off and put her elsewhere.  Then I gathered up the untidy chewed heap and put it back in the bag (somehow it took a lot more room than before.  The wooden circular needle showed quite a few needle teeth marks too).  Put it upstairs and shoved all thoughts of Advent knitalongs firmly from my mind.

But you can't leave a yarn like that betrayed and forlorn and forgotten.  So I had to face it again, take it from the bag and spread it out (yes, in another room, far from Marigold, indeed from any of the zoo).  It took three full days to unwind and untangle that yarn (miraculously there was only one actual chewed break - the silk must have been stronger than I thought.)  It was carefully rewound into a skein and given a very gentle bath, then hung in a quiet place to dry.

But the heart of the project was gone, the joy, the anticipation.  Just couldn't face starting all over again.  And by now, everybody else was weeks ahead.

But then, one morning (it happened to be my parents' wedding anniversary which I always remember because they got married in December and went skiing in Switzerland for their honeymoon, which was quite daring at the time), I saw that the newest knit clue had dropped into my mailbox and half-heartedly I clicked on it, thinking that I really should explain to the others why I hadn't been around on the chat site lately.

And it so happened that that day's pattern incorporated a delicate little lace design known as Lingonberry.  Now I adore lingonberries.  Some of my happiest memories are of sitting in a cosy restaurant in Finland enjoying reindeer stew with lingonberries.  And I wondered if, after all, it might be possible to get back into the knitalong and pay homage to lingonberries at the same time.  So that's what I did.  The new scarf is far simpler, being just the graceful lingonberry design rather than the spectacular sampler, but I was at least knitting along with everybody else, which was what mattered. 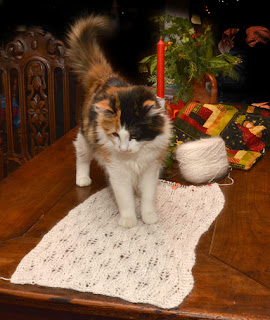 Here it is so far, with SuperBrat being told to promise faithfully never to meddle with it again, and looking at me with those insolent golden eyes that say 'Is it kidding me, you are?'

You might not be aware of it, but we have had the stormiest, windiest, wettest December on record in Ireland.  Every night we have gone to bed to the sound of shrieking winds, and every morning woken to rain lashing at the windows.  Fortunately Celtic Memory's home is on a hill, so flooding has not been a problem, but so many people around the country have been suffering that it breaks your heart.  Imagine getting ready for Christmas and then having floodwater rush through your home, sweeping away all your preparations?  Imagine having to leave your precious home and all the security it once promised, to huddle in a community hall?  And we have so many farmers who have been desperately trying to save their cattle and sheep and horses and somehow find shelter and feed for them.  As of tonight, the forecasters can't see any end in sight.  All they can say is that it's likely to continue for another two or three weeks.  Ireland is well used to acting as a sponge for rain, but no land can take this much.  There are parts of the world, clearly, which are not getting this water, and who need it just as badly as we want it to stop.  Wish I could organise it.

But yesterday was a brief, wonderful break, with strong cold winds but a clear blue sky.  And we rushed out to get some air, some exercise, and give the youngest dog, Petroushka, a reminder that yes, there were beaches and gallops and fun to be had in the world. 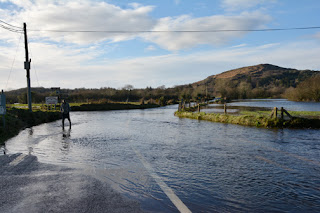 Only a few miles from home we were warned to stop in our tracks by this friendly man in gum boots.  Try a side road, he suggested.  Straight ahead of you, it's a lake for miles.  So we did, and managed to struggle through that particular inundation in a foot or two of water. 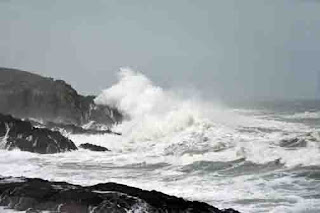 Down by Crookhaven, the sea was dashing on the rocks and roaring among the bays.  Definitely not a day for paddling, but it was wonderful to breathe salty fresh air again. 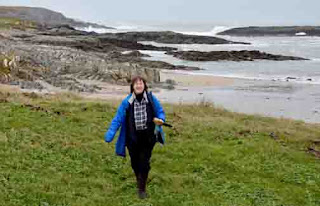 And 'Troushka loved every minute of it, scrabbling over stones, leaping rock pools, sampling the seawater and remembering belatedly that it wasn't a good idea, and generally being a happy dog. 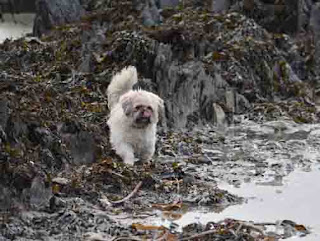 The high winds had brought in some rare birds to our shores too.  Last month we saw an American bittern near Castlefreke, and yesterday we had the privilege of close contact with some splendid glossy ibises who must have been blown across from Florida. 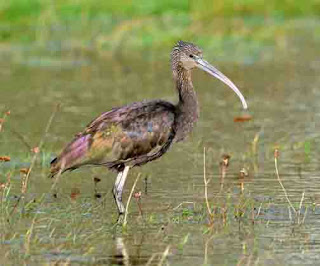 I hope this bird and his companions have a happy time here, feeding up and relaxing.  And that, perhaps, they stay awhile.  If there are enough of them, maybe they'll decide to settle in West Cork? 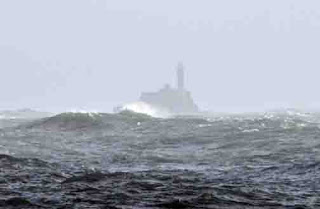 Here is the Fastnet Lighthouse, barely visible through the seaspray, with the waves dashing against its rocks.  It's automatic now, but what must it have been like in the days when three or four men handled that great light, to ensure no ships went aground in storms like this?

Now we're back to storms and rain, but there are some advantages to being kept indoors.  It meant that a good deal of time could be spent working on ideas for De Nextest Book, which is now, at last, taking dim shape.  I can tell you that it's going to be about the old roads, the old trackways, the ancient routes which linked different parts of Ireland, and what you can discover even today when you step off the tarmac and the speedway and follow the path less trodden.  Who could joy in getting to a destination in ten seconds less than yesterday when by turning quietly off into a side lane, you enter a world where waving bushes almost meet across your windscreen, where grass grows in the centre of the path, and history is all around you?

A very happy New Year to you all.  May 2016 bring all that you wish for (but don't forget to swim out to meet your ship of dreams halfway, instead of waiting for it to come to you!)