At last we've reached Feb 1, Imbolc, Brigit's Day, Candlemas, call it what you will.  And here in West Cork the animals and birds, not to mention growing green things, seemed to sense it a few days in advance. 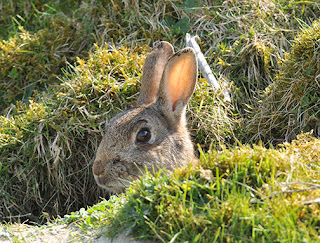 We hadn't seen a single rabbit for months, during all the cold dark wet days from November to January, but two days ago, when we looked out at the field behind the house, little heads were popping up all over the place. 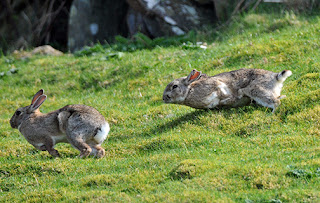 And there were some wild chases across the grass.  Doesn't that look like spring is in the air? 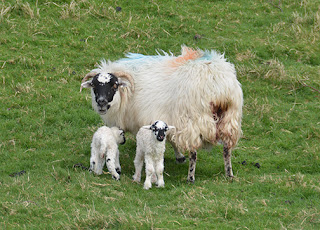 The first lambs are here too.  We usually have them fairly early in the mild climate of West Cork, and I tend to worry if we have cold wet spells.  Those little things can't take too much of the chilly damp. Their mothers take good care of them, though, and tucked into that shaggy fleece at night, they must be fairly snug, wouldn't you think? 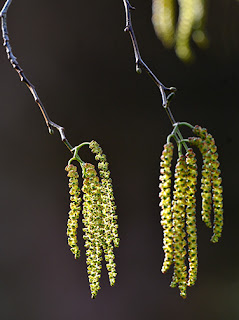 The catkins are shaking their delicate cascades of greeny-yellow everywhere, 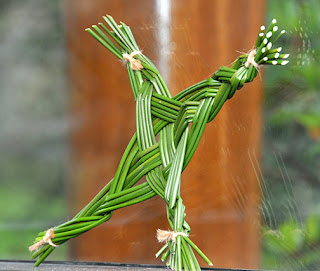 and the rushes are springing strong and green for the traditional Brigit's Cross.  This is the goddess Bright's day. Imbolc, the beginning of spring, the time that ewes come into milk because their lambs have arrived, hens start laying, crops start growing, and we can all draw breath and look forward to plenty of good healthy food again. Or our ancestors did anyway.  We tend to rely on the supermarket year round, but it might not be a bad idea to practise a bit more self-sufficiency now and again, and reflect the different seasons in the food we eat.  At Midwinter we follow the tradition of breaking out the supplies to have a small festive celebration of the turning of the year;  then it's a lean diet again until spring brings back growth. 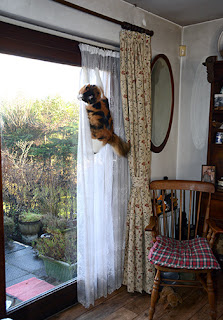 The wild creatures aren't the only ones to be feeling the call of spring.  Marigold has taken to leaping wildly up the curtains and hanging there, uttering little cries of delight at the improved view she can get of the garden outside. 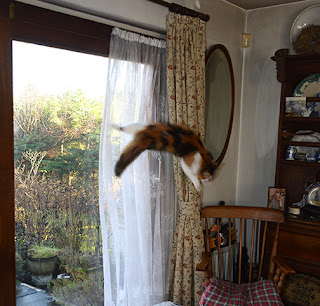 She has also perfected the difficult circus trick of somehow letting go while simultaneously twisting her body so that she can leap to the chair in safety.  I just do not know how she manages to shift her weight around like that.  Cirque du Soleil, are you looking for a new performer?

Yes, the knitting continues.  Although that Fireside Sweater in the bright blue yarn that I mentioned last time had, alas, to be frogged at an early stage.  The combination of thin needles, thick yarn, and exceptionally twisty cables, brought on a painful attack of carpal tunnel syndrome.  No help for it but a week away from the needles.  (Mind you, it is more than likely that over-use of the  mouse at the computer did even more to exacerbate the situation, but typing can't be stopped, unfortunately.  It's how I make my living.)  Hopefully all will be well before the start of Sock Madness next month.  Right now the thought of miniscule needles and fine yarn makes my wrist leap in protest.

Still, this splendid sideways sweater got done before The Revenge of the Wrist: 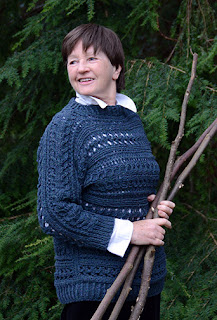 It's the Faro Pullover by Amy Christoffers and I used four strands of a fine Shetland wool.  Great fun to make, as you start at one sleeve and work right across (frightening number of stitches when you're doing sleeves, back and front all at the same time, but that stage doesn't last too long, thank heaven). It's a sturdy warm gansey for spring and feels very happy in wearing.  I've called mine Hebridean Memories because that seems more appropriate than Faro.

(Which reminds me:  if you fly into Faro, Portugal, do be aware that they have the daftest possible system for motorway payments.  You are clocked every time you use a motorway, BUT you can't pay it for several days afterwards because their system doesn't upload it immediately.  So if you're heading back to the airport with your rental car, ready to fly home (and it's virtually impossible to avoid the motorway for that) you leave knowing that you haven't paid!  The hire car company gets on to you a month or so later, by which time the bill is considerably higher than it should have been.  Intelligent, yes?  It was a couple of years back that we experienced this, and it was enough to stop us returning.  Maybe they have sorted it by now, but it's the kind of thing nobody knows about until it's too late.  Portugal, are you reading this?) 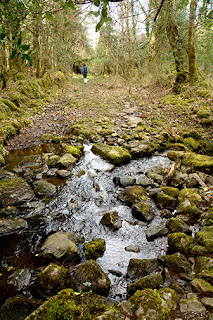 Work on De Next Book proceeds apace.  Well, not quite apace.  It's not always encouraging weather for exploring ancient roads and tracks in the countryside, but when the day looks like it just might be dry for a few hours, off we head.  It isn't simply the wonderful old track that you follow, it's trying to work out why it was there in the first place, where it came from, where it went to, who might have followed it, and what spirits and ghosts of the past might still be there, watching us walk past.

When the weather really doesn't permit, the time is spent working through old documents, maps, books, searching for clues and hints.  Came across those lovely Bee Judgements  or Bechbretha from the ancient Brehon Laws last night.  I'd almost forgotten them. 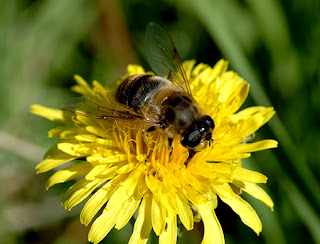 Bees were so important in old Ireland, for the honey they produced/.  Sugar, whether from cane or from beet, didn't make an appearance until much later, so honey was prized and every decent householder kept a hive of bees.  Do you remember that old custom of Telling The Bees?  You had to go out and knock politely on the hive at dusk and tell them of births, deaths, marriages, or other major events.  If you didn't, they might just leave, and you would be the poorer.

The Bee Judgements dealt with every possible situation, from your swarm deciding to move to a neighbour's land, to finding a stray swarm in your own trees.  Even the fact that  your busy little creatures clearly gathered their nectar from further afield than your garden was taken into account, and neighbours were entitled to a small share each year.  As was the local ruler.  Apparently milk and honey blended into a warm drink was considered a very pleasant treat indeed. Must try it. 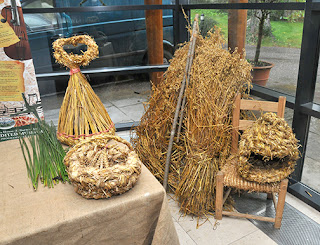 The old Irish word for a beehive was corcog.  Here is a rather decorative little holding skep at the back left, with that twisted wreath on top.  You could use that to capture a swarm which you happened upon by the roadside, and then bring it home in triumph.  That dear little straw house on the right is for a broody hen to sit on her eggs in peace and quiet.  I wanted that henhouse when I first saw it, and I still do.  They're made of twisted straw or sugan rope.  Must go and hunt up the chap who makes them.  And isn't it time one learned how to make baskets properly?  Check out courses.

We are also hunting down old standing stones and especially those with ogham writing on them.  Ogham is the oldest form of writing we have, but it isn't the kind  you would choose for writing a passionate love poem.  It's more for chiselling the bare facts on an extremely hard surface.  Cuchulainn Wuz 'Ere, rather than, I will arise and go now, and go to Innisfree....

Some of the most magnificent ogham stones are sheltered within the wonderful Stone Corridor at Cor University.  I loved that corridor when I was an undergraduate, I still do now.  The behaviour of those who removed these stones from their original settings and brought them here might be questioned;  but their motives were surely worthy.  They wanted to make sure that they were protected for future generations, not knocked down by developers or utilised as gateposts. 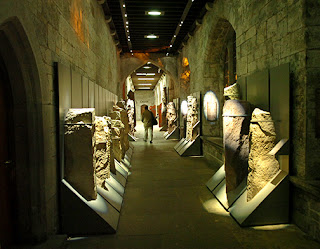 If you ever find yourself in Cork, go and admire these.  Or, rather, stand quietly among them at dusk (it's always dusk in there, on the sunniest day anyway).   They speak to you.
Posted by Jo at Celtic Memory Yarns at 12:49 pm 7 comments: