A Day in The Remote Valleys

'Twas my birthday the other day, and of course we had to head out into the wild blue yonder to make the most of the August weather (sunshine now and again, showers equally likely, but then, that's Ireland for you).  So the dogs were tucked into the car, the cats were warned to stay in the garden and not on any account to chase birds, and we set off westward for Killarney.

Because birthdays are times for Doing Nice Things, and the first of those had to be a stop at a certain weaving mill in the woods not far from the lakes which make Killarney such a magnet for visitors.  You wouldn't know this mill was there,except if you thought to enquire where its lovely products on sale in the shops at Muckross House came from, because it really is tucked far away from there in a place which shall be nameless (not giving away my best secrets, am I?) 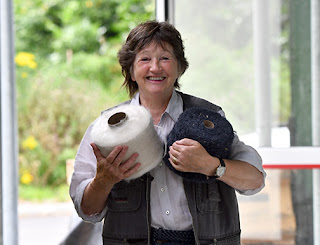 And here is a triumphant re-emergence from said mill, with not just one but TWO treats - a scrumptious cone of brushed suri alpaca (stop drooling!) and another of dark blue boucle.  Oh the fun of deciding what to make with those!  The brushed suri in particular is so incredibly soft that you can't stop stroking it.  Would make beautiful scarves and cowls for ultra-sensitive skins.

Not far away, the native red deer of Killarney were moving around peacefully. 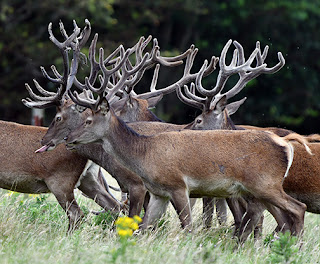 These young stags were all lying down, but once they caught sight of us, they rose as one and moved quietly off.  Can't imagine why their antlers don't get tangled up, but they seem to manage them just fine. 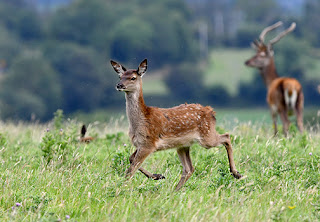 And here is a fawn, anxiously checking to see where his mother has gone.

Next we headed for Moll's Gap, which, as its name suggests, is a gap between the mountains where since time immemorial travellers have journeyed between Killarney and Kenmare.  The Avoca cafe here serves the most delicious cakes - sorry that DH didn't take a picture of them for you, but he was too busy sampling the merchandise.  And yes, some scraps got brought out to the car for the dogs too.

As you  head on from Moll's Gap, there is a steep and winding tiny road leading off the main thoroughfare, down, down, down into a long glacial valley.  This is known as the Black Valley, and it's a remote place now, although in earlier centuries it would have had a good population scraping some sort of living there.  You can still see traces of the old ridge and furrow fields where potatoes were planted - some of them so high up the mountainsides that you realise just how desperate their planters must have been, seizing any sort of ground that might yield enough food to live on. 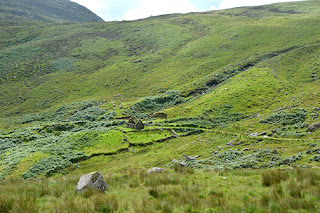 Can you see the tiny ruined cottage down there, with its old stone walled fields still visible? 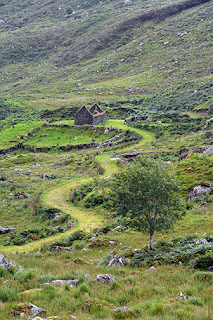 Here it is, a little closer, with that wonderful green track leading to it. 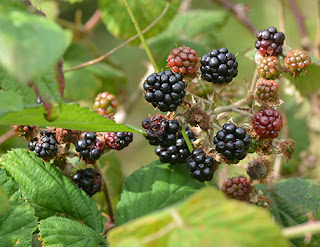 The blackberries were ripening - 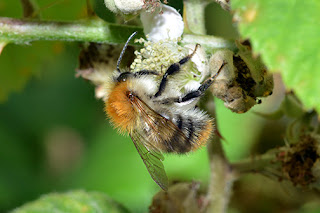 the bees were busy - 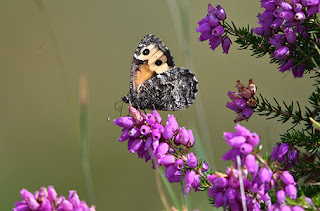 and a grayling showed his preference for heather honey.

It was beautiful out there.  The acid soil of the mountains, which is ideal for heather, has a very distinct and lovely scent of its own, and it was wafted on the breeze across the valley until you felt like sitting there for the entire day, just drinking it down into your lungs, and committing the whole scene to memory, so that you could think about it lying in bed at night. 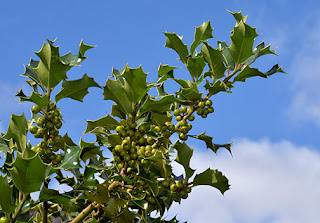 Look!  Here are holly berries BEFORE they get that December red glow!  They aren't really noticeable at this time of year, but it looks as though it is going to be a splendid crop this winter. The birds will be pleased.

Tamzin, the little Shi-Tzu, has always had a problem with her built-in GPS or homing device.  She could, quite simply, get lost in a straight corridor or a paper bag, and this trip was no exception.  I took both dogs out of the car and straight up a little goat path into the hills, to pick some bog myrtle (good for keeping flies away).  After a while I noticed that Tamzin wasn't with us, but didn't worry because the car was parked right at the foot of the track....  Foolish!  Came back down, no sign of Taz.  A woman came along in a car and said the dog was about half a mile down the road.  Rushed off, found her trotting happily along, wondering where we were.  Never again! 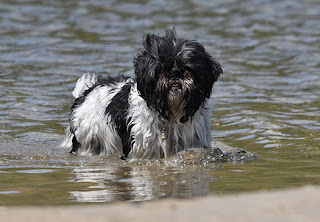 This has happened too many times.  The last was a few weeks ago in an acre of sand dunes down by Mizen Head, and it took hours to find her - at the other side of a river which she had somehow crossed all by her tiny self (and managed to struggle back over too, when she joyfully saw us).    From now on she stays on a lead or she stays home. 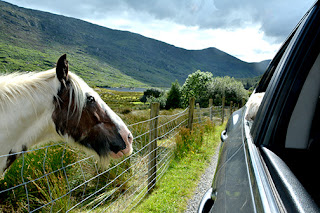 Can you just see Petroushka there, peeping out of the car at that rather friendly piebald pony?  'Well hello, and how's everythin' with you?' enquired the pony.  'Tis nice to have a stranger passing by.' 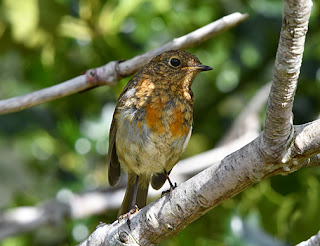 This young robin (only just getting his chest colouring) kept following us, wondering what we might be up to next.

But the real delight came with the fleece-dyeing sheep who have evidently been trying new colour combinations to see what works best in the damp climate of the Black Valley. 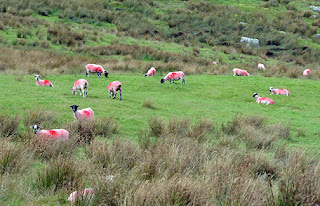 Red perhaps?  So handy for espying your friends and relations across the hillside. 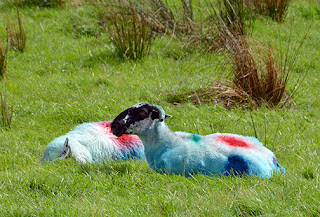 But maybe some blue would look good with it?  Colour blocking, you know, it's all the rage.

Had I knitting with me?  Of course I did.  The current project is a quite complex one, The Oban Cardigan, by Baby Cocktails.  It's worked all in one piece up to the armholes, which makes for a very heavy project to drag along in the car. 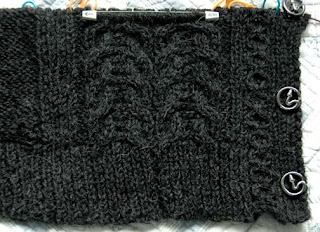 Here is just a section, with the buttons I am going to use.  Got those from the lovely Button Store on Cork's quayside.

And it may not have escaped your notice that the Tour de France was on during July, and that always signals the Tour de Fleece among committed spinners.  You are supposed to spin each day of the Tour, and challenge yourself on the days that the poor cyclists have to struggle up steep mountainsides. 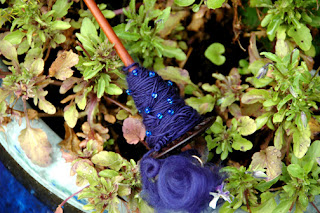 Celtic Memory's challenge was to create beaded yarn on a drop spindle.  Which succeeded.  A bit finicky, but it is entirely possible. 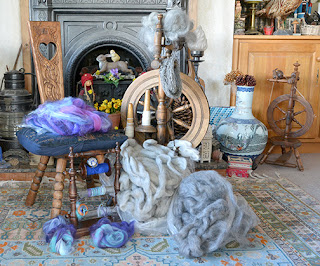 And here was the entire plan for TdF, piled on to the spinning wheel (Orkney) and spinning chair (Welsh) - spin this, ply that, try to do something with those... Of coure it didn't all get done.  But it was a lot of fun, and it is always good to keep your hand in at an ancient craft.  Go and refresh your own memories of working with your hands.  NOW!