The first experience of a hurricane in Ireland in my lifetime, and Celtic Memory profoundly hopes it will be the last.  Folklore records The Night of the Big Wind (oiche na gaoithe mora) back in 1839, but that was more of a European windstorm, and since then the occasional gale is all we have had to worry about.

Until a couple of weeks ago, that is.  We had heard of the dreadful damage done further to the west, of course, and were concerned for friends up and down the Americas, but such things don't happen here.  When they told us that Ophelia was headed straight for Ireland, we couldn't quite believe it.  Surely it would swerve off and lose itself out at sea somewhere?  How could it aim directly at this tiny island on the western edge of Europe?  But it could, and it did.

Almost the worst bit was lying awake on the Sunday night, in absolutely still, muggy weather, knowing that this monster was tearing up across the ocean towards us, and would be here by morning. It reminded me of that terrifying Dore engraving of a plague advancing on England - do you know it?   Must go look it up.  Got up at one point and looked out the window.  Nothing moving.  Clouds lay quiet and dark across the sky.  The garden lay silent and calm.

It was, oddly enough, a kind of relief when the wind began to get up towards morning.  The actuality is always a bit better than the waiting.  At least you're in it, and getting on with it.

By 9am, things were getting a bit rough, but we still had power, light, wifi.  By 11, the sky was as dark as evening, and the cattle in the field below our home were bunching into a well sheltered corner (facing south west, in the direction of Ophelia, strangely enough, since normally they place their backs to the wind, but they did choose a strong corner with a bank and hedge in front of them as solid protection).  We know and love these cattle.  Eamonn is a big and gentle bull who looks after his cows and is even kind to the skittish young wans.   He knew what to do to protect his flock, and lay quietly down with them as the winds strengthened to a screaming roar. 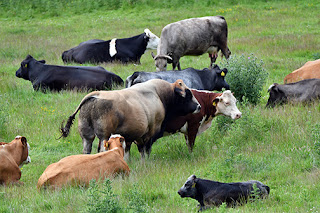 (Needless to say, this picture was taken in quieter times.  During the storm you wouldn't dare to do anything like opening a window.)

First thing to go was the power, and with it of course the wifi.   Then, quite suddenly, no mobile phone connection.  Those masts must have been damaged too.  We sat and listened to the roaring winds, watched the trees bending in half, and shrank as we heard rattles and bangs from the roof overhead. 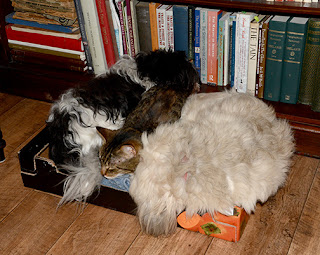 Dogs and cats crowded in together for comfort and company. If they kept their heads down, they reasoned, maybe it would all go away.

As eventually, thankfully, it did.  After a couple of hours, we looked at each other.  Was there the very slightest lessening in the sound of the wind?  Was there the teeniest hint of light in the sky?  Glanced out of the window, and there was Eamonn calmly and stolidly leading his harem back out into grazing territory.  Never mind that the rain was still slashing down, that the wind was still whipping the treetops.  His instinct (still there in animals, although we have lost most of it) told him that the worst was over.  Which it was.

Of course that was just Ophelia having passed on up the country to give others a taste of her temper.  The clearing up was to take a long long time.  Over a week in fact, before we had water, power, light, wifi, mobile phone service all up and running again.  The woodstove was kept busy, as was the camping gas equipment, buckets were constantly being refilled from the rainwater butts, and we became experts in creating meals that needed as little power as possible.  But it can be fun dining by candlelight, and you do appreciate the coming of daylight each morning so you can actually see to read or knit or do anything more complicated than going outside for another load of firewood.

One more thing about Ophelia.  That night, after the winds had died down, and all was calm, the sky was ablaze with stars, more than we had ever seen before.  Not only stars, but the delicate sickle of a new moon.  What a perfectly lovely sign to give reassurance.  It took me some time to realise that the reason we could see so many stars was because there was absolutely no lighting from anywhere at ground level.  We live in the countryside, but even so, the lights of Cork and Macroom some distance away are always visible as a glow.  For a brief while, we didn't have that, and were in as good a position as anyone up in the Arctic Circle hoping to see the Northern Lights.  Was happy enough with the new moon and the stars though.

It wasn't possible to knit on anything complicated by candlelight, as others have doubtless discovered before me, but the neglected bright yellow socks certainly came back into favour. 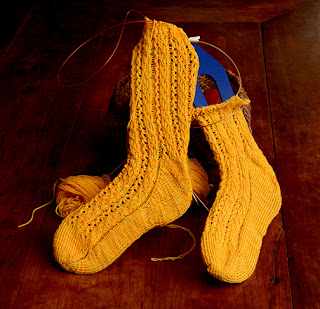 I've been working on these (or rather NOT working) for longer than I care to remember.  My own hand-dyed, a nice merino with a hint of sparkle, in a fairly easy mock-cable and lace pattern that I made up as I went along.  I was knitting these when I met up with my good friend Linda at Wonderwool Wales last April, it shames me to recall.  Really must get them done. 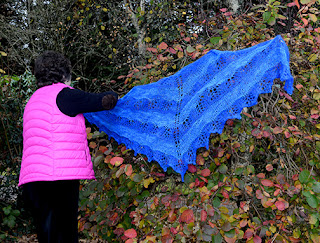 And the bright weather that followed the storm meant things could be washed and hung out in the welcome fresh air.  This is another long-term project which finally got finished, a Shaelyn shawl in hand-dyed mohair and mousse.  Beaded the edges to give the points more emphasis. 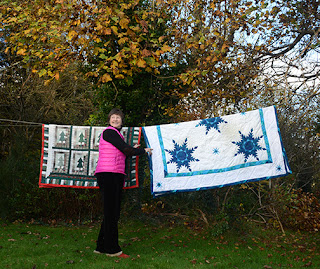 Even a couple of quilts got laundered (carefully) and hung out.

And now that there is light to be had at all hours (have you ever thought about how difficult it must have been to read, to study, back before we had electric light on tap, so to speak?  I can tell you it occurred to me more than once during the Emergency), I could at last get on with a second version of the Faro Sideways Pullover. 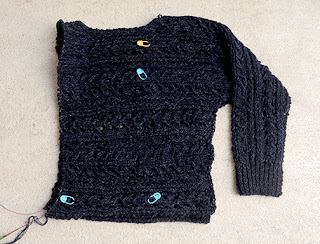 This time a stash dive revealed two good cones of a fine Scottish lambswool/cashmere blend in dark navy.  Wound 4 threads of that with a single thread of a rather glamorous and equally fine cashmere/sparkle cone, also in navy, which I had discovered at the back of a shelf in Fairfield Yarns outside Manchester a while ago.  You have to keep on the ball with five separate threads, no matter how carefully you try to twist them together, and every now and then there is a loop of one or another to be caught in with a crochet hook, but the overall effect is devastatingly gorgeous.  Another couple of weeks on that one.  It's at the second stage of having so many stitches on the needle that you despair of ever getting a row done. (One of these purgatories as you work the section between sleeve and centre front at each side.)  At this stage the longest possible cord and interchangeable tips are being used.

Some work had to continue while we were powerless, and you wouldn't believe the jigs and reels that were necessary to (a) get a weekly column typed up and (b) somehow transmit it to the relevant editor.  It involved driving many miles until we found a part of the city that had power, then discovering somewhere with a good mobile phone signal, and finally using the mobile phone (charged during the driving) as a hotspot to email the text.  My editor on De Nextest Book was trying to get through by email constantly, to demand amendments, adjustments, rewrites, but couldn't make contact.  She was in London, and apparently hadn't heard of Hurricane Ophelia.  Meant a lot of work when we got back to normal.  I swear I will never take modern conveniences for granted EVER again!

Some things wait for no man, however, and the other day we had to dash down to Killarney to catch the wild red deer at their vocal best, during the rutting season. 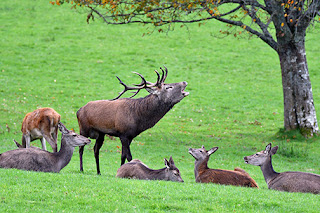 This fine stag was letting every eligible female within miles know that he was AVAILABLE and READY. Can you see that susceptible young doe looking up at him admiringly? 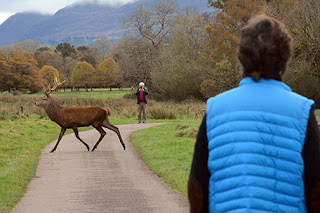 When a bulllish male like this decides to trot across the road in front of you while rounding up his willing women, you tend to stand back respectfully and let him pass!

And in complete contrast, had to attend a rehearsal for a new production of The Sleeping Beauty, coming up at Cork Opera House shortly. 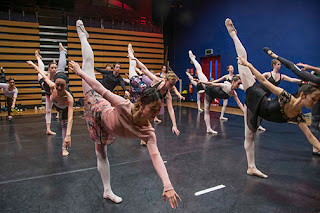 These young dancers from all over the world had only just arrived in the city, but went straight into a very demanding assessment class and then on to the first rehearsal, with hardly a break for a coffee and a (small) biscuit. 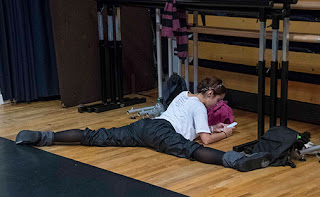 Don't you just love this picture of a dancer taking a relaxed (!) break while texting her family to tell them she had arrived safely?

And so to the most important event of recent days.  The arrival of - 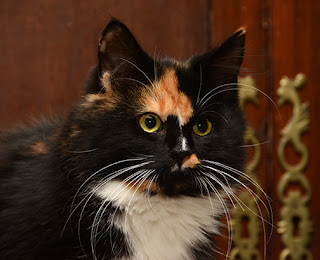 This is Pawtucket Princess Pocahontas.  Or maybe Minoushka.  Or should we make that Termagant Toffee Apple?  Suggestions welcomed.

No, it wasn't intended.  Really it wasn't.  Three cats were quite enough.  But my friend Eileen, who manages the local veterinary clinic, had this pathetic little mite dropped on her doorstep.  Suffering from meningitis, only able to stagger in circles before falling over, she was in a dreadfully bad way.  The vet and Eileen between them pulled her round, but it was a near thing.  And once I had held that little paw and listened to that brave little resounding purr, I was done for.  DH rolled his eyes, but admitted that she was a lovely little creature.  And so she came to her forever home. 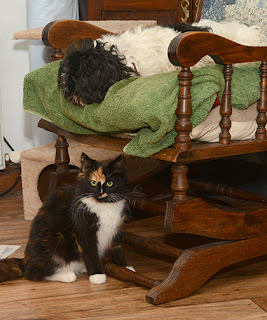 Of course ructions were expected.  Not from Tamzin:  she's a loving little dog and was clearly anxious from the first moment of introduction to make her feel at home. 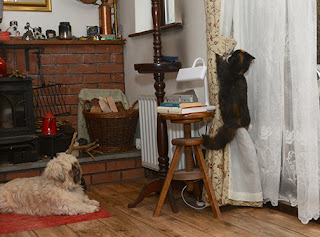 Troushka is always inclined to be a little bully if she thinks she can get away with it, but even she was impressed by Minoushka's (Pawtucket's?) climbing skills. 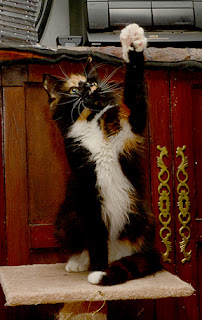 Polliwog touched noses gently, and left for the evening.  Paudge Mogeely raised his beautiful green eyes to heaven and hastily departed to follow Polliwog.  And Marigold, hitherto the queen bee, baby spoiled brat, and Most Important Person, smacked Minou across the face and retired to the bedroom in a major fit of the sulks. So all proceeding as normal.

It's been quite a month.  With knobs on.  But now we are on the first day of the Celtic New Year.  Time to get all your bulbs and seeds planted in the soil, so that they can sleep and gain strength before uncoiling and starting to grow with the spring.  And there is a full moon tonight outside my study window as I write.  A Happy New Year to you all!
Posted by Jo at Celtic Memory Yarns at 6:06 pm 8 comments: