We went wandering across France a couple of weeks back, eschewing the well-trodden routes and heading for the less known regions. Forests, woodlands, lots and lots of tall green trees were required. When De Next Book is finally on its way to the printers (hopefully not long now) Celtic Memory has it in mind to create one which explores the peace of mind and soothing of the soul to be discovered in the heart of great woods: places where ferns overhang little streams and little holes among the roots of trees might lead to elven dwellings; where hazel nuts and crab apples tempt you to fill baskets, and the silence wraps you in an awareness of another world. 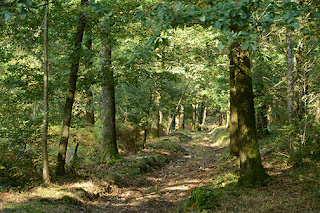 The Ardennes are quite a way from the western ports of France:  it took the best part of two days to get there, but it was worth it to explore this region. Don't know if you're familiar with that area, but France sort of pushes up a little promontory into Belgium, with Luxembourg close by on the east.  I had certainly heard of the Battle of the Bulge but until we got here, I hadn't really realised how the geography dictated history.  The mountains rise high between France and Belgium, with this one narrow gap through which the Meuse flows, the railway line runs, and a narrow road twists along between the two.  And throughout history, if anybody felt like invading either north or south, this was the way they came.

History takes other forms, though, than war, thankfully, and the scenery up along the Meuse was pure delight. 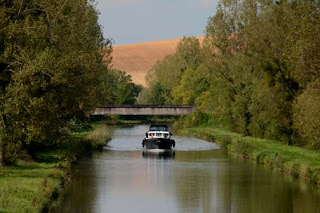 Just look at this peaceful barge purring its way along with not a worry other than the next lock to be negotiated.  Quite a few sections of the river were canalised, where narrow stretches or shallow sections would have interfered with smooth travel. 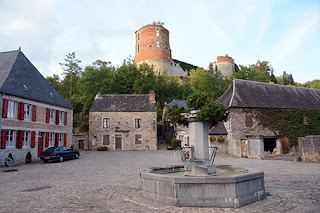 This is Hierges, a tiny and perfectly preserved old-world village.  The square with its fountain is still cobblestoned, and high up there on the hill you see the ancient castle.  Back behind the original tower, later developments were built on, finishing with a rather elegant 18th century chateau, but all still within the original castle walls. Clearly the lord of the manor had no intention of leaving his domain or the village which lay under his sway.  It was evening when we tiptoed in to look at it, and silently peaceful, but one imagines it gets a fair few visitors by day.  It was easy to feel the atmosphere of past centuries though as the church bell chimed the evening hour softly and pigeons fluttered up from the fountain to a steep tiled roof. 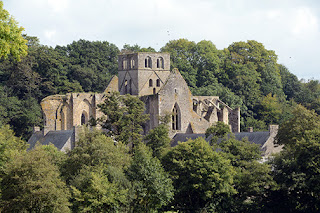 This ancient abbey was breathtaking when it suddenly appeared amid the trees.  It's Hambye, and even its ruins are enormous.  It must have been a hive of industry in the Middle Ages, with chiming bells and singing monks and a busy settlement all around supplying the needs of the monastery. 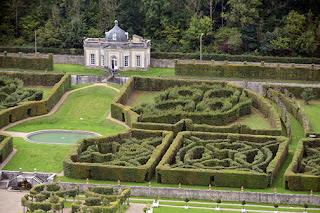 Stopping at a bend in the steep mountain road, we looked over to the valley below and spied this incredible knot garden which belonged to a semi-ruined chateau.  Clearly somebody was taking very good care of the box hedges at least, whatever about the building. 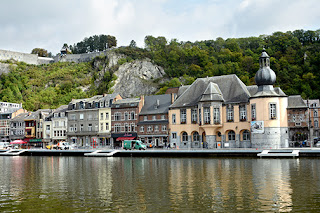 And eventually you slip into Belgium without really realising it, and discover the exquisite little town of Dinant which spreads out alongside the river.  Had coffee in a cheerful beer house here, and noticed that the atmosphere was already becoming more Austrian or German in style since we had come further east. 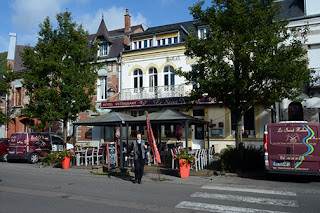 This is Le St Hubert hotel and restaurant in the village of Haybes, about halfway up the little French promontory (can't bear to call it The Bulge).  And if you are ever fortunate enough to find yourself in the Ardennes, make sure you stay here, and only here.  Forget bigger towns, swankier inns:  this is the real thing, the France for which you search and so often don't find.  It's small, it's old fashioned, the staff are delightful, and the food is to dream about.  The hostelry has really been there since the 18th century, but unfortunately, due to its somewhat obvious location, has been rebuilt several times, the last around 1947.  War tends to do that, and everywhere we went, we heard or saw evidence of wholesale destruction and rebuilding.  It does bring home to you just what life must have been like for the locals.

But sitting in the cosy stube (well it was a stube by then rather than a French cafe, having a distinctly more German feel to it) drinking local beer and ordering the plat du jour, not bothering to ask what it was since it would undoubtedly be delicious, remains one of my happiest memories, to be taken out and fondled on cold winter nights back in Ireland.  One night the special dish was a simple omelette with girolles - those little yellow forest mushrooms which the chef's wife had picked in the woods only that afternoon.  Pure poetry!

As I said, everything gradually changed as we moved further east (because of course, having enjoyed the Ardennes so much, it seemed only sensible to move right over to the Vosges on the German border).  Houses were different: 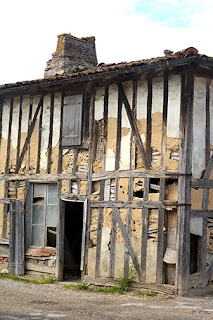 Look at this old relic in a village through which we passed.  Original wattle and daub!  I wanted to buy it on the spot and look after it forever! 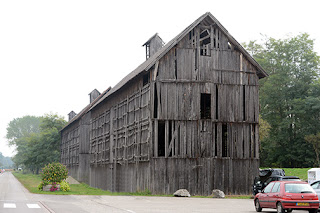 And this incredible old - what is it - barn, workspace, storage shed?  Did you ever see anything so huge built entirely in wood?  How it has survived one can only imagine. 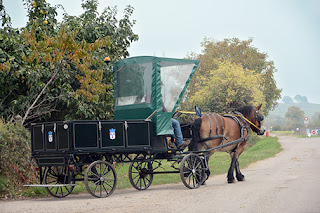 Isn't this cart wonderful?  Far more sophisticated than the leiter waggons of Transylvania (and the wheels certainly look as though they would give a more comfortable ride), but still a relic of older, simpler times. 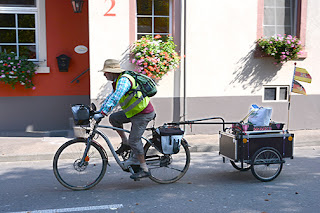 This man had worked out his own way of bringing his goods to market, and wouldn't thank  you for offering him a large noisy lorry instead.  I remember meeting a stallholder at a French market years ago, when a national strike had immobilised lorries and trucks countrywide.  He had simply loaded all his freshly-picked produce on to a trailer like this and cycled it to the village.  'We had to do it during the war,' he said simply, 'and we have not lost the habit.' 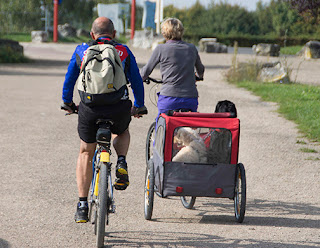 DH was quick on the trigger to catch this picture of two small dogs enjoying their morning fresh air in a special little carriage towed by their loving owners.  It's a great idea if you possess a dog that is less nimble than it used to be, isn't it?

The Vosges were breathtaking, tier after tier of mountains rising to the horizon, all wrapped up in dark green furry blankets of trees.  And here life seems almost unchanging. 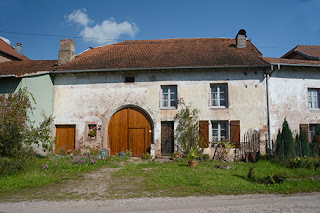 The very traditional farmhouse of Alsace/Lorraine keeps everything under one roof.  Very convenient in the winter months when the snow piles up all around.  No need to struggle through a farmyard:  just go through from the main living room into the warm snugness of the barn to do the milking and feed the sheep and poultry.  We saw ancient renderings of this type of building everywhere as well as very new ones, showing that the old ways are still considered the best.  Sometimes, when one sees over-grandiose mansions built in the countryside here, where cottages formerly stood, one wishes that we had the same belief in the good sense of older styles.  Yes, certainly indoor plumbing is a good idea, but pillars, flashy electric gates, seventeen bedrooms?  It always looks like a deliberate refusal to admit that our parents were content with simpler ways.

The farmhouse is uber-practical, but in some of the towns, it was like a big book of fairytales come to life. 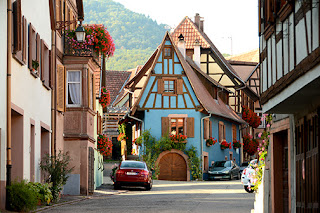 Just look at this tiny triangular turquoise pet, built exactly to fit the point in a lane where the ways divided.  Isn't it just made for a hobbit? 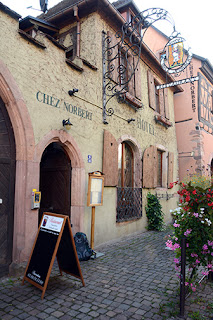 And this old inn, apparently one of the oldest in the world, at Bergheim?  It's called Chez Norbert.  No, I didn't check if it had indoor plumbing or not. 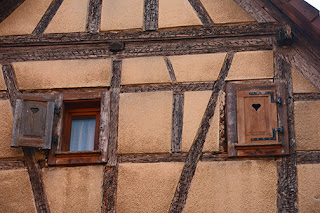 DH was going mad with his camera, finding one image after another to capture.  See these tiny windows, high up on one of those old houses, each with its own heart-decorated shutter? 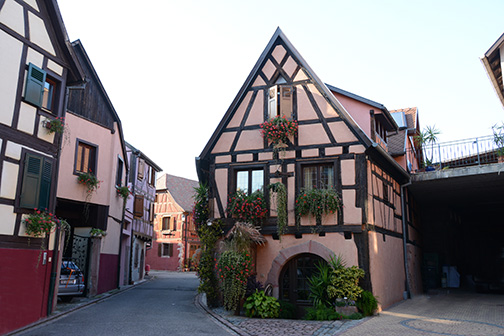 And these Pied Piper of Hamelin houses, leaning confidentially towards each other over narrow laneways?  I wanted every single one of them.


As the day was ending, we found the loveliest surprise of all.  A great celebration of the new wine in the village of St Hippolyte - a true fete du vin, where everybody for miles around had come to sit at long tables, sample the dangerously-easy-to-drink new vintage,consume sausages and sauerkraut/ choucroute, and generally have a good time. 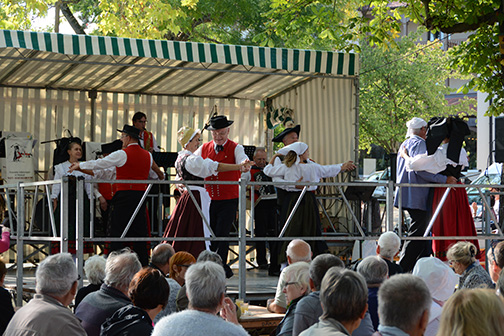 Best of all, there were traditional dancers!  Absolutely the one thing I would have chosen to make the day utterly perfect!

Celtic Memory has a weakness for folk dances.  Well does she remember trying to copy the local gypsies somewhere in Transylvania one hot summer night long long ago.  And, indeed, dancing the czardas in a production of Coppelia, complete with soft suede kneelength red boots.  After these dancers had finished circling and swinging and swaying to the very jolly music, they came down to mingle in the throng and take a rest.  I saw one lady who was beautifully dressed and begged her to let me take a closer look.  Which she most willingly did. 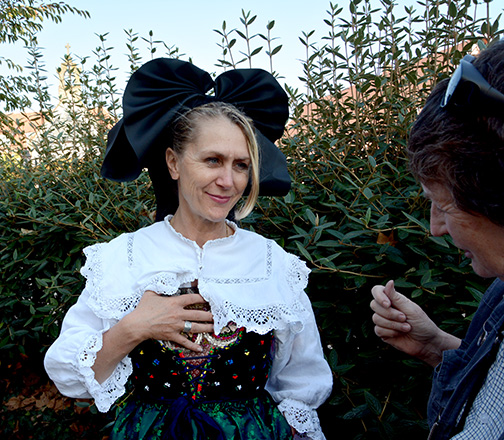 The big floppy velvet bow-hat had belonged to her grandmother, she told me, as had the laced top and the very detailed  embroidered velvet stomacher which went inside the lacing.  She was so proud of it. 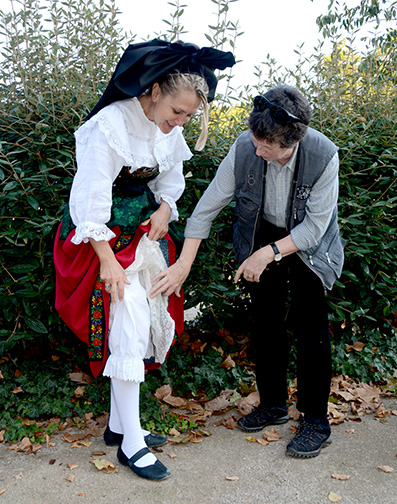 She even showed me the correct pantalettes which went under the bright red skirt.  I was delighted!  Note to self:  make an Irish traditional long red skirt immediately, complete with petticoats, and wear on all possible occasions! 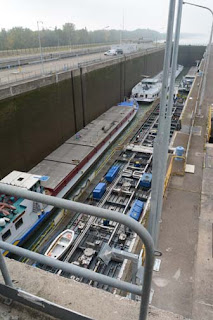 Having got as far as Alsace/Lorraine, it would have been disgraceful not to get a sight of the mighty Rhine, so onward we went, and crossed that great river next to a gigantic lock system which was feeding five huge barges through at a time.  This pic might give you some idea of the vastness of the lock:  those boats are but BIG! 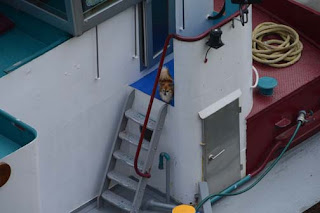 A couple of the barges had little dogs on board:  the genuine little schipperke which has been the breed most associated with these canal boats since time immemorial.  It was nice to see the tradition being continued in today's vaster world.  Can you just see that little chap at the top of the ladder there? I was worried in case he fell in, but his impudent confidence showed that he was well used to a life on the water.  As, quite probably, his father, his grandfather and his great grandfather had been.

Of course we crossed the Rhine.  Who wouldn't?  And found a wonderful little riverside cafe where ripe chestnuts split their prickly skins and bounced down on to the table as we sat and enjoyed the view. 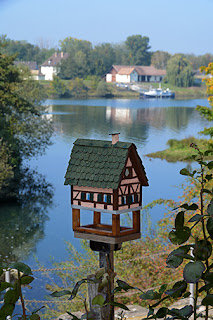 Germany spoken this side of the Rhine, French the other.  Great fun.

It was a wonderful trip.  Journeying back all the full width of France was a bit of an undertaking, but we got home safely.  And the memories will remain.  Oh gosh, will they remain!
Posted by Jo at Celtic Memory Yarns at 7:12 pm 12 comments: