Life has been a little trying for your Irish correspondent since our last meeting. I told you about buying that nice sock yarn in the little Clonakilty yarn shop; well last night I decided to succumb just a little bit to temptation and try out this fascinating technique known as the Magic Loop. Several helpful souls on various Net forums had given me the URL for finding all the necessary instructions so I settled down happily in front of my screen with circulars and yarn in hand.

Ye gods! WHO is responsible for inventing that sadistic instrument of torture, the Figure Of 8 Cast On? It looked weird enough to start with; but I had figured (unwisely, as it turned out) that as I was of reasonably advanced years and had a lot of dropped stitches under my belt, there wouldn't be anything that I couldn't handle.

I mean - have you tried to follow those instructions? Hold two needles one above the other. Hang on - does this mean both ends of that circular or an entirely new pair of needles, complete strangers, who had no idea up to this minute that they were invited to the party? If so, do they need to be the same size? Should I have gone out and bought the entire stock at my LYS? I decided they meant the original circular since there were no preliminary notes about getting in survival stores of needles.

Then wind the yarn around these two in a figure 8 pattern, keeping hold of the end (you're telling me, that end was friskier than a puppy let loose), until you have about 12 on each needle. (I think the instructions said, though I may be wrong - I wasn't in exactly my right mind by this time - that this meant 12 on each at this stage which would of course (my italics) mean 12 overall once you'd done the preliminary row. Pausing only to mop a fevered brow and push an over-affectionate puppy off my feet, I soldiered on.

First knit the stitches on the top needle. Easier said than done. They were only loops after all. Make sure you are still holding on to the end of the yarn. Darn! Gone again. Start again.

Then - and this is where we move into the Theatre of the Absurd - you are told to now bring the bottom needle to the top and knit those stitches. How? With what? Are we talking about yet another circular? Another pair of innocent needles whisked in off the highway where they were taking an evening stroll, and pressed into service? A needle hiding in the background behind the curtain, hitherto unsuspected? Is one supposed to slip everything hitherto knitted with so much pain and effort on to the cable and use the freed-up needle to do the second lot of stitches? But which end if so?

It was academic in the end. Every time I tried yet again to follow those smug instructions, everything shredded gaily off the needles and resumed their original condition, i.e. one length of increasingly more tired yarn.

It reminded me sharply of maths classes in childhood (New World readers, I think you prefer to call this discipline math. Whatever. I'd missed one session and when I came back a helpful schoolmate offered to show me how to do long division (you probably don't do this any more, but it involved totally useless activities like trying to divide 4782 by 13. Why? Don't ask me, I just went with the flow.) It's easy, she explained, you just see how many times 13 might go into 47. And it goes in three times, so you put down 3 for the first figure. But how do you know that in the first place, I wondered. I mean, where was I supposed to find out that 13 went into 47 three times? She looked blankly at me. The teacher looked blankly at me. The rest of the class looked blankly at me. Clearly there was some small vital piece of information which no-one had seen fit to give me. I still can't make much of a hand of long division, but the opportunities for showing off by dividing 4782 by 13 are fewer and fewer these days, I find.

It's the same thing with the Figure of 8 Cast On. I sought guidance on Knitter's Review, on Knitter's Help and found lots of information, plenty of guidance. It's easy, they all assured me. You just... And then those instructions again. WHAT AM I MISSING HERE? I really really mistrust that phrase, It's easy, you just...

It's as bad as another phrase I mistrust. You can't miss it. Oh can't I? You're going to see someone and request directions . You are told to take the first left, the second right, and straight ahead. You can't miss it. Several hours later, you telephone from the middle of nowhere and they think it hysterical you couldn't find them. Oh did we say first left? Well, yes I suppose there are five roads before that one. And second right? Oh sorry, we meant fifth right. Was the farmer all right about it? The bullocks didn't make too much of a mess of your car, did they? Well, from where you are, just keep turning right. You can't miss it.

Retourner a nos moutons, I hear you cry. Back to the subject. OK. Socks. Well, around bedtime I admitted defeat with that F*O*8*C*O*. I also wasn't too keen on hearing the words Magic Loop for some time to come. BUT, you know something? All that suffering made five little dpns look very welcoming indeed. I was tired, I was cross and hot and wanted to go to bed. But I found a set of dpns and carefully cast on, following a simple pattern recommended by the Twisted Sisters. I worked four rounds of rib and hit the sack. This morning I took the bus to town. It's a very jolly local country bus which makes a winding journey through all the local villages before getting to Cork. Everybody knows everybody else on board. I took out my sock which immediately evoked floods of reminiscences about the good old days. By the time we reached the city I'd finished the rib and got on to the stocking stitch. 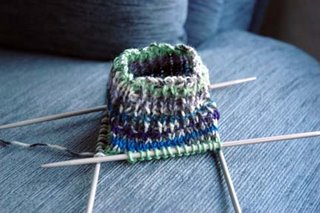 Now don't make fun of it. It's my very first and I am so proud of it I feel like singing its praises from the rooftops. Isn't it the prettiest baby you've ever seen? Isn't it cute? Oh you were right, all those of you who said sock knitting was addictive. It is. I can't wait to get back to it. I'm going to look on the Net for a nice little set of wooden dpns - and I like that suggestion from somebody on Knitter's Review who said she kept two sets of needles the same size so that she could work on both socks, turn and turn about. I did that with crochet socks but they're still in the WIP basket. And while I was in town, I picked up a ball of soft black sock yarn. I'd like to try a pair with little cables down the sides.

So, although yesterday was severely stressful, today was better. And it got better. When I came home I discovered that a pattern I'd bought on eBay had arrived. It was a design for a lace shawl but a very very special one. I'd first worked this shawl in my teenage days, during long summer evenings in our family home. It was a time of security and happiness, of utter belief in an exciting world, knowing that home and my beloved mother would always be there to come back to, wherever I might wander on my adventures. 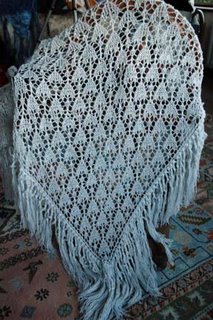 I kept that original shawl through many years of seismic life changes, moving from one country to another, one way of life to another. But the pattern got lost along the way. I searched everywhere, I hoped one day to unearth it in some hitherto overlooked box or envelope, but it never resurfaced. It was part of that world that had gone forever.

Then I saw the pattern up for sale on eBay and it was as though a door locked for so long had reopened. I had to bid and re-bid - the interest in that little scrap of paper was extraordinary. But in the end I got it. When I opened that envelope today and took out the simple little pattern, there was a lump in my throat. I'd got something back that I thought I would never see again. 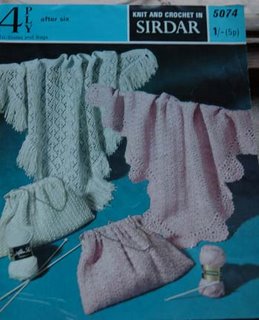 'But why didn't you simply study the shawl and work out the original pattern,' asked Richard simply. Do you know, that had never occurred to me.
Posted by Jo at Celtic Memory Yarns at 9:48 pm

Hurray! The socks are well on their way.

Yep, forget the fancy cast-ons and just knit. At least that's what I do. I never stopped to think there may be better ways to start a sock then the regular ol cast on method.

It's the pits there're so many lucious yarns and patterns when there's only so much a person can knit in a day.

To think I had the magic loop technique in line as a possible future project ..don't think I'll bother.I tried to read the most simple instructions in "Viva Poncho" yesterday and ended up flinging it at Holly saying "you read it" ..she flung it back saying "oh God" .It's easier to just look at the picture and procede.It doesn't help that U.S instructions say things like "B.O" ..Holly says "Bind-off" Mum " ...so it's not Body Odour then .

I must show Holly the stuff about long-division ..she will laugh her socks off ! I hated Maths ( Math always sounds like you've got it wrong missed something or got a lisp) .I was useless and like you the need for long division has never been a help in life ...extreme multiplication working out how much 10,000 balls of silk-garden might cost but only in my dreams .