The Legend of Knitting...

Bouts of drenching rain interspersed with bright sunshine today. In this kind of weather the garden explodes into action and the grass grows six inches when you turn your back. The young swallows are out of the nest and sitting on the wires, waiting eagerly to be fed by their parents who must be yearning for the day they can use their return tickets to Africa and leave the kids to fend for themselves. 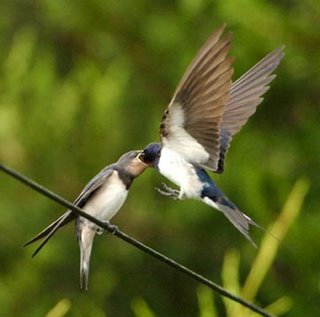 I was really pretty pleased with myself last night for having actually managed to cast on for the Interlacements socks on those miniscule toothpicks, and further, managing to knit two whole rounds on each. You want to look forward at that stage, imagine the delirious moment when they are actually FINISHED.

But Peg, you were absolutely right to question the number of stitches I had on the needles. FAR too many. Why? How did that happen? I followed gauge religiously, but that wasn't where the mistake came in. If I'd stopped believing implicitly that the pattern was telling the truth (well, you do sort of believe in them in the beginning, don't you, rather like Santa Claus? When did you first realise that there wasn't a Santa Claus and that patterns were not always perfect?), then I might have done the maths (math for you New World girls) and would immediately have seen that casting on 112 stitches, however tiny the needles and however fine the yarn, was going to result in a sock that would be a comfy fit on a medium-sized elephant.

And so this morning was yet another of those rip-it-out-and-start-again sessions. It's always heartrending as you eliminate in a few angry tugs those careful stitches upon stitches. Even the yarn, still holding the shapes of the individual loops, seems to reproach you. And casting onto those toothpicks yet again was no easier. I'm terrified that any second I will suddenly forget, clasp my hand shut or make a fist to shake at a dog shrieking at the neighbours (quietly working in their garden without a knitting needle in sight), and instantly shatter all five exquisitely made little rosewood dpns.

But now it's evening and I'm working on half the number of stitches. The needles are happier too. They were a bit overloaded with the original number (28 on each) and the tiny stitches were slipping off each end. This way they're moving along, although so slowly. At this rate it will be Christmas before I get beyond the cuff (yes, I'm working from the top down. I did look at some instructions labelled 'Extra Easy' for starting at the toe, but by the time I'd read through the details on Provisional Cast On eleven times ('now use the waste yarn, but ensure that the real yarn is kept to the back, not on any account to the front, and do not twist unless told to do so...'), I felt a brainstorm coming on and retreated to the comparative familiarity of top-down.)

Thanks to to those of you who told me where I could buy Handmaiden Sea Silk, that wonderful-sounding yarn which incorporates real seaweed in its make-up. As I'm fortunate enough to be going to British Columbia at the end of September though, I feel I must buy it within Canada, where it has originated. That way the magic it surely must contain will be full strength.

You might remember the Yarn Harlot saying she'd read somewhere that knitting was magical. It is. You weave spells, whether consciously or not, when you work with needles and yarn. There are so many old legends - we have dozens of them in Ireland - which relate enchantments that can only be broken by the knitting of garments in strange fibres. Have you ever read Judith Marillier's Daughter of the Forest? That is the most wonderful re-telling of the Children of Lir legend. In her book the heroine has to make the magic shirts of
nettles to free her brothers changed into swans. If you haven't read it yet, get it. The denouement is unforgettable.

Nettles, and brambles too, are like flax in their structure and you can make fibre from them in the same way. I sometimes strip really long bramble stems of their prickles by wearing (very) strong gardening gloves and
pulling them through my fist. Then I weave them in and out of a row of willow twigs to make fences round my flower beds. A lovely lady at a nearby tree nurserycalled Future Forests (must introduce you soon) uses raw
sheep fleece in between the interstices of the weaving to make the fence earthproof. She says the medieval monks used to do it that way, as well as insulating the walls of their stone huts with fleece.

And, oddly enough, monks are exactly what I've been thinking of when I've been getting used to my tiny dpns and brightly coloured sock yarn these last couple of days. I was thinking about the Book of Kells and how the monks in ancient monasteries sat stooped with fine quill pens and coloured inks over their sheets of vellum , working long hours by guttering candles for sheer love of the beauty they were creating - just like me with my tiny needles and jewel-bright yarn. Well, it's not so far-fetched an idea.

This is the biggest sample I could find from the Book of Kells on the Net - I can't locate my own copy of the book at the moment. But you see the fine detail and the colours? 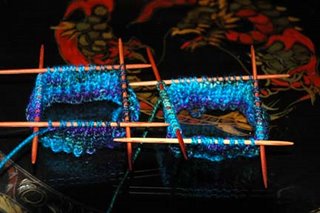 And here are my little socks-in-progress. Well, I can see the link anyway. Look at your own WIP with an artist's eye. Are socks the new illuminated manuscripts? Let's reclaim our rightful place as fibre artists.

We have no shortage of ancient ruined monasteries in the countryside here, all ideal for wandering and dreaming of days past (even with rain dripping down your neck and brambles waving in the wind). Lots of ruined castles too. Within a five mile radius of where I live there are at least six. Even the junction outside is known as Castleview Cross, because of Mashanaglass Castle across the river. Then there are Macroom Castle down the road, Crookstown in the opposite direction, Carrigaphooka, Carrigadrohid, Dripsey, all close by. No, definitely no shortage. 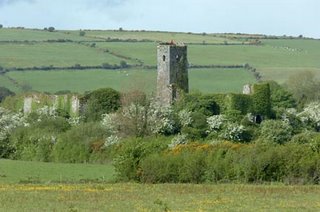 There are however days of great yarn hunger when I'd swap you - oh, let's say three ruined castles for a package including one Joann's, one Michael's and a special yarn shop of your choice. Maybe a Hobby Lobby tucked in if there's room. I wouldn't be depriving Ireland of too much, honestly. Yarn shops we are short of, castles we are not. Come over and buy one if you want. Jeremy Irons did. He, having the requisite bank balance, did up his place on the coast beautifully. You sometimes meet him on the country boreens down around Schull.

And thanks too for letting me know that my yarns can't always be found on eBay. When you told me, I looked myself by typing in Celtic Memory Yarns and got a nil result, even though I only listed them on Friday. So then I went in the slow route by Buy, and Crafts, and Yarn, and Handspun/Handpainted, and eventually located them. It's worth remembering, I keep telling myself, that technology doesn't always work. Back to the knitting needles!
Posted by Jo at Celtic Memory Yarns at 9:13 pm

I make wonderful little fences around my very viscious Roses with Forsythia brancheswhich bend like willow. I know our neighbours think I am bonkers .Most of them have flagstones with two pot plants and have a nervous breakdown if a leaf strays .Holly was just watching a prog. about Illustrated books at The Fitzwilliam Museum in Cambridge.I have a huge history of illustrated books she loves.

well THAT was a wonderful post, and congratultions on your socks—they are indeed jewels!
i was thinking of the book of kells myself yesterday morning, whilst thinking about the saints legends and how, at one time, all those visual and aural representaions were SO important because so few people could read. religions nowaday rely so much more on the Word, and it's fundamental truth, and so much less on art and pictures, which are more subjective, i guess, but also more flexible.
and i love those stories, religious or not!
(ps: my mother had to TELL me about santa claus, and even then i looked at her and said, "no, i think it's a mistake—that can't be right!—why, he flies")

Sorry, but I won't be over to buy a castle real soon. In fact, I am with John, my DH, doing a little DIY on our own little 'castle'.
Glad you are now carrying less stitches on the needles for the socks. I have slim feet and ankles, so I always try to knit socks on 2.25 mm needles with approx.64 sts.
I love your fences. If I am not mistaken, in Australia and NZ, they use fleece for insulation in their homes. Would work for me!
I have heard so much about the Book of Kells, must get a copy! Take care and happy sock knitting on your wee needles.

I think you'll be pleasantly surprised by how fast the knitting of those socks goes. It always takes me a few days to get used to tiny needles, but after a while the big ones start to feel really clunky and clumsy.

These socks were knitted as my olympic knitting challenge, in spare time in the pub and on holiday.... They probably took me less time overall than a garter-stitch jacket in aran yarn!

Lovely post - we all need a reminder at times to see the beauty in what we do. Enjoy your toothpicks.