This Is About Knitting, Not Future Chippendales!

It's a beautiful evening here in West Cork. A pale gold sky is overlaid with what I would call mackerel clouds of infinitely varying shades of grey and everything is gradually fading into dusk. I can look at skies like that for hours and try to work out how to capture it in yarn blends and compositions. I'm never really satisfied with the results but keep on trying. It's a kind of painting, I suppose, but with yarn instead of tubes and brushes. A lot less messy in one way, but can be fairly exasperating in others, when different yarns insist on getting snarled up together and somehow knotting themselves into inextricable relationships. It's nearly time to start getting the next collection ready. Somebody was demanding to know where Lunasa had gone to on eBay. I have to admit that I was having so much fun weblogging that I had forgotten to re-list it. Fine commercial queen I am!

Today DH and I were out and about from an early hour. He had a job (did I say he's a press photographer, yes a genuine member of the paparazzi, only we're not quite that relentless in Ireland) in Youghal, a seaside town in East Cork. On the way there we stopped at a friend's restaurant for coffee. Henry and Aisling run Gazebo's, a great place not far from Youghal, which obligingly opens from early till late to look after weary and hungry travellers in the best Irish tradition. Before she had Henry, two small children and a restaurant to look after, Aisling worked for Tivoli Yarns (you may have come across them in your LYS). She had not, however, interacted with circular needles before, so I brought down the last sleeve of my Anny Blatt for her to try out. She was enchanted with the way they worked (well, they were those divine Colonial rosewoods from Warm Threads ) and realised without my having to point it out that it would make those awful moments when an entire row slips off your needles, almost a thing of the past. 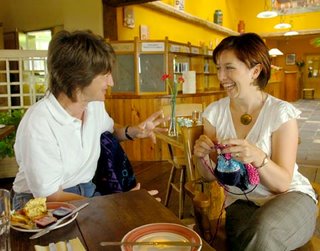 The event Richard was covering was the Maritime Festival in Youghal, which included lots of happy street events and the traditional 'Puc Fada' or 'Long puck' across the harbour - this involves grown men with hurleys trying to strike a ball an extraordinary distance. Its origins go back into prehistory and even Cuchulainn (tell you about him another time) played hurley. When the All-Ireland Hurling Final is on, there's no time for weblogging. It's not a matter of life and death - it's far more serious than that.

In the back streets they had a parade of vintage tractors and I found one rather delightful young man tinkering with a 1940s machine. I don't have any real excuse for presenting you with John G. Kelly of Knockanore, except that I have the sneaking feeling you'd like to meet him (settle down, girls, settle down). 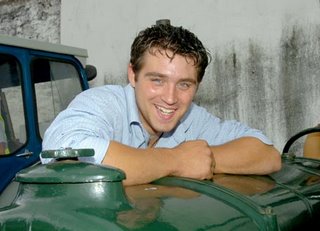 Please rest assured that this weblog will not morph into a preview for the next Chippendales calendar. It's just that I love old traditions, customs and folklore. (Still can't see an excuse in there, really.)

Now to less happy matters. I left you the other evening with an excited prediction of my forthcoming first date with Magic Loop. I was looking forward to it, and expected great things of the relationship. Well it went nowhere. Was the fault mine? I did try, really I did. It's not as if I don't passionately love circular needles. I do. I wouldn't use anything else now. But for knitting in the round - or in the Magic Loop method anyway - I found too much tug and pull, where I expected ease and relaxation. Besides - and this was the real deciding factor - the online instructions I found told you how to cast on but then abandoned you entirely, leaping gaily ahead to turning the b*y heel for heaven's sake, when this frantic novice was marooned back at the cast-on stage, wondering what the hell to do next. You might as well have given me a piano and a set of instructions which read, 'Place hands on the keyboard. Now - play Beethoven's Fifth Symphony. There - wasn't that fun?'

Is there by any chance a site which gives slightly more detail on what needle point to put where and indeed how? I feel a bit of a failure, frankly, and am looking forward to the imminent arrival of my two sets of rosewood dpns from Scottish Fibres . Really I prefer the little clicky things. And you have to admit they make a sock project look so pretty at any stage of the work. Take 'em out in a pub or cafe and you have instant attention.

Rho says the two circular needles method is really foolproof and has promised to look out an 'easy' version for me. (Thinks: is this going to be another hated phrase: 'so easy even you could do it?')

I found this lovely crochet shrug marked down to half nothing in a sale the other day and bought it: partly because (to my surprise) it looked quite nice on me, but mostly because I thought I could copy it in a nicer yarn (it's all viscose, this one) and make something really dramatic. What do you think? 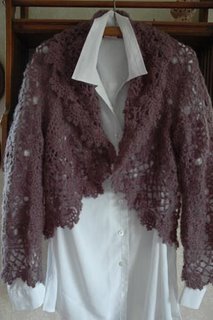 The back and sleeves seem to be made up of individual motifs joined together, and then the whole thing has a very wide and flaring crochet border worked around it. Here's a close-up view of the back. 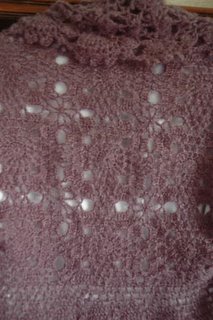 It might look nice in a mohair, mightn't it?

The GOOD news is that the Anny Blatt is finished at last. Got the last sleeve done while sitting in the car watching some energetic folk swimming a mile, cycling twenty miles and finally jogging five miles, all for charity in the Youghal Triathlon (very healthy the people of East Cork). Well, the main pieces are finished anyway. I am well aware that the most iffy section now approaches: actually sewing it up, making an edging band, not forgetting that buttonholes need to be worked BEFORE I'm up to the neck, finding buttons that actually fit. The finishing off is really half the task, whether it's a PhD or a cropped cardi and never forget that, you dozing at the back. 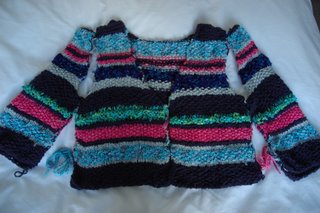 Anne, the thoughtful Anne (beautiful skirt you made there, how about seeing it in floor-length next?) ever mindful of my real needs, was delighted that I'd discovered Simply Socks and has recommended even more yarn sites for me to look at. Hey, I thought Addicts Anonymous was meant to help me NOT yearn for yarn. Or
did I get it wrong. Have I fallen in with one big happy family that only exists to help its members amass more and more and even more of the lovely stuff? Just please reassure me once more - sock yarn doesn't count, right?
Posted by Jo at Celtic Memory Yarns at 9:43 pm

and I don't think I put it quite like "'so easy even you could do it?'" but it really is easy - you should have the instructions by now - most of which will be nothing new but it was for beginner knitters remember so just gloss over the parts you know....

that jacket is so pretty—even for crochet (wink!)
and jo, i infinitely prefer circular needles too, for all things EXCEPT sox! i hate them for socks! i don't like any technique that makes me feel like i am straining the tools, and that there is a possibility for breaking them.
i much prefer 4 needles, i can fold up my sock and tuck it away in my pocket or bag. they are a little harder to get used to, but worth the trouble.
and i also have to say that it took some years before i loved making sox; but now it is a passion (a side hobby all its own really). once i started spinning my own sock yarn, sock knitting came alive for me! i find the same thing with students—they all curse their way through the first sock, and then somewhere in the middle of the second one, they are converted to sock knittistas.

Is that shrug from "Principles" ? I had my eye on it for Holly but then decided she has so much stuff.As I hate how I look I prefer to see pretty things on her. As for that "traditon" a fine looking one it is !!!! I love that name "Aisling" in fact I love all the names of the Cusak girls however hard to pronounce. This Hurling might explain a lot about the ferocity of a certain much loved Harvard educated young man's touch football techniques which seemed to result in a lot of broken bones. I never understood why a quiet gentle person turned into a tiger on a pitch . I love the Anny Blatt .You have been busy whereas I still can't pick-up my knitting . I do manage about two rows of a Kaffe shawl most days then sit like a saggy rag feeling bored .I used to do pastels but find that using colour to create something that doesn't just hang on the wall so much more satisfying.

My way of magic loop knitting is to use the longest needle I can get at the store - preferably 36 - 40 inches. Then it is like knitting on two straights until the end of the row (half-round) then pull the needle around and knit on two (connected) straights again. I have knit about 8 pair of sox on one US000 size Addi needle and although some of the nickel plating has worn off, it looks good for many more.

I also knit hats on a smaller circ because I don't want to go buy any more needles right now and short is what I have. I do it with only one loop at the beginning and work around to the end. A very flexible cable makes the whole thing - either way - much easier.

The crochet shrug is lovely!

Good lord that kid is hot. I couldn't even look at the knitting.