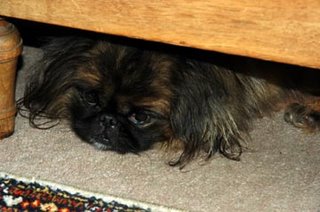 IS THIS THE WORLD'S FIRST PEKINESE YARN HARLOT?

This is Muffy. As you can see she is glowering out from underneath a cupboard. The cupboard is in my study and she regards it as her own private space. Serious trouble if one of the other mutts tries to get in there. Muffy has had her problems and to tell the truth she is not the most balanced and outgoing, tennis-playing, life-and-soul-of-the-party dog that you could meet in a month of Sundays. A couple of years ago she went very odd indeed, lost her balance, started travelling in circles instead of straight, and went completely off her food. The vet diagnosed a brain tumour, I had hysterics, and Muffy lay on a chair and got thinner and thinner. When she couldn't even raise her head, I stopped crying for long enough to tell DH to call the vet and ask him to come round (no dog of mine is going to end her life on a vet's table when she has a loving home in which to breathe her last) and went out to find a puppy. Heartless? No, a survival technique learned over years of losing beloved pets. You still feel the pain, and quite a bit of guilt, but the new baby does distract and keep you from gazing at the worn collar and lead. (I should say that at this stage, Number One Dog, Tasha, was crowing with delight at the prospect of having the food bowl to herself in future and showing no grief at all.)

I came home, having interviewed several puppies at a reliable breeder's, and booked the irresistible tot which clambered on to my lap and went to sleep, to discover that the vet had been on holiday that week and DH (rightly) didn't think a locum would do. However, new puppy still arrived two days later. WHEREUPON, Muffy staggered to her stick-like paws, fell off the rocking chair, and proceeded to demolish a gigantic dinner, muttering savagely under her breath that she wasn't done yet, no not by a long chalk, nor would be until she'd seen that little upstart off the premises.

That, as I said, was two years ago. Today Muffy is as weird as ever, but weighing in at healthy normality otherwise. Puppy has grown up to be twice her size and can beat her elders with one paw tied behind her back (but doesn't because she's very sweet natured).

I'm telling you this because, after watching for weeks, I have finally had my suspicions confirmed. Muffy is a confirmed YARN FIEND! Oh Stephanie Pearl McPhee you have a rival harlot! Is this the first yarn-obsessed Pekingese in the records? It began when I had accidentally left the door of my yarn room ajar. That's where I blend and spin (and swear now and again) while I put together my range of Celtic Memory yarns for eBay. Returning later on, I was surprised to see a long trail of Torc Waterfall (or was it Innisfree, I can't remember) draped across the carpet. Then I noticed that the ball I'd wound to make up a shawl for photographing for eBay was gone. Like Ariadne in the labyrinth, I followed the thread (actually several threads of especially lovely fibres, including mohair and glitter - this was a very precious yarn and I was starting to hyperventilate). The lovely trail led out of the yarn room, across the upstairs landing, and into my study. Across the study carpet and UNDER THAT CUPBOARD. I reached down and hauled out the much-chewed, hopelessly tangled, not to say rather wet, bird's nest that had once been a beautifully wound ball (I use a nostepinne because I'm a romantic, even though it takes ages and I know I should get a proper winder.) Carefully, delicately, almost in tears while at the same time consigning Muffy and her anti-social behaviour to perdition, I untangled the poor disaster. It took three hours (these were once pretty aristocratic yarns, unused to rough behaviour, you understand). I can't even bear to show you a photograph Oh let's be truthful here, I don't even have a photograph - I was far too hyped up. I put the sad exhausted ball on a table and went to bed. With a large drink and the Twisted Sisters' Sock Book - always good for relaxation.

Muffy has obviously been practising acrobatics in secret. The next day that door had been opened again, and the ball of Innisfree (or was it Torc Waterfall?) was back under the study cupboard, in a worse state of entanglement and slobbery than ever. But wait. There's more! Getting down on hands and knees, first to haul out the obstinate dog who was mounting guard over her treasure, and then to rescue the yarn, I found several other small balls and scraps, including a tiny skein of silky mohair and two lengths of eyelash that I had been searching for everywhere. She's been stowing away her own stash and I never realised it!

Do you think a Pekingese would find straights or circulars easier? Or maybe she'd be happier with a hook? 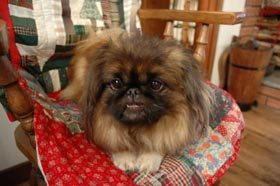 Here she is, planning her next trip upstairs. You can see she's dreaming of space-dyed ribbon, can't you?

Posted by Jo at Celtic Memory Yarns at 8:57 pm

Poor Muffy ,still she's alive .We had a cat that walked backwards ,moved in with a family down the road and broke my heart ! Still I'd say one day you might find she's done freeform dog-blanket under there ....any crochet hooks gone missing ? Now I need to see the other dogs.I'm a cat person as a norm but fell head over heels in love with a miniture Dachshund called Lily who visits our L.Y.S .

What a riot!! You're a wonderful storyteller.

Having just served several days of jury duty I have to ask: did you actually see Muffy take the yarn? Chew the yarn? Have you thought that perhaps that Tasha planted the yarn in the effort to cast Muffy from her cupboard throne? Hee, hee.

Maybe you can appease Muffy by crocheting her a small rug for her space. She's a hook dog, by crook.

Maybe she was just telling you she loves yarn as much as you do.

We have 2 pekes, mother (16 yrs old) and daughter (10 yrs old). They both have their own personalities. The mom was acting strange with head tilting, falling over, not focusing her eyes. When taken to the vet, was diagnosed with either a brain tumor or a severe deep inner ear infection. The prednisone cleared up the problem and she is fine. Maybe yours is not a brain tumor if she is this perky. Good luck with your babies.

Felting needles and roving. Get 'er started with those and you may find your yarn stays a bit safer.

I love how she got better out of obstinance.