The one thing that links us all across the globe on weblogs like this is our passionate love for and desire to get as much as we can of yarn. Chunky or laceweight, colourful or natural, smooth or full of bumps and boucles, we can't get enough of it. We search every corner of every shop wherever we might find ourselves to ensure that no ball goes unnoticed or unfondled. At least I do. Doesn't everybody? And although we may dally with rayons, flirt with viscose, giggle at eyelash and occasionally have a brief affair with exotic strangers like soy silk and bamboo, we all know in our hearts that top billing, the main stage, always goes to pure natural wool. There is nothing like it, for spinning, for knitting, for crocheting, for weaving. It's the classic, the uncontested queen of fibres.

So it's nice to go right back to the roots of the business and see where it all starts, that long road to your local yarn shop. And that's exactly what I did this morning, heading out to the small town of Millstreet in North Cork to meet a man called Daniel P. McCarthy (he is particularly fond of that P - omit it at your peril. What does it stand for? Patrick of course. What else would it be in Ireland?)

Dan is one of a vanishing breed of Irishmen, a wool merchant. His father, his grandfather and his great-grandfather were wool merchants before him, when a single fleece fetched a high price and the profits of one season's clip was enough to buy many acres of good farmland. Today, the cost of shearing far outstrips the few pence obtained for each fleece, but Dan still continues the family business. He buys each year's clip from farmers throughout the southern counties of Ireland and stacks the wool in his warehouse before it is bought by industry. Once local mills would have spun it into blankets, rugs and carpets; back in the 1980s, when Dan first came into the family business, those mills had gone and the product went to the huge spinning industries of Yorkshire in England. Today, his business is mostly with China and India where lower production costs make it still a profitable industry. 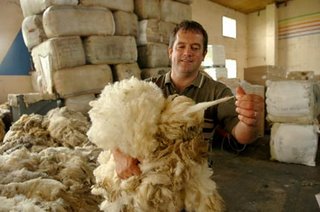 Dan loves his work, and knows a great deal about the wool he handles. 'See now, this is from a mountainy sheep,' he says. 'That's a rough fleece, you'd use it for something that would get hard wear. And this is from a lowland sheep, it's much softer and nicer, but it wouldn't wear as well.' Millstreet stands at the crossroads between the mountains and the rich grasslands and all the wool grown on the backs of the sheep for miles around comes to Dan's warehouse. It used to be a local dance hall that warehouse in Millstreet, and often, he says, a farmer will come in who tells him he first met his wife there at a lively evening.

Dan hopes he won't be the last of his family to practise the trade of wool merchant. 'If it would only get fashionable for people to want a pure Irish fleece, or a jumper made from the wool of a sheep from, say, Dingle or West Cork, then we could survive in Ireland. If someone like Armani now, one of those big fashion designers would send an Irish fleece down the catwalk, we'd be made. ' As it is, he confesses, if keeping sheep in Ireland were to cease instantly tomorrow, it would not even be noticed on the world's market, so enormous is the contribution from larger countries. And that's sad, when since prehistory we have exported it across the world. Maybe fashion is the answer for Dan and his kind. Perhaps he should market the uniqueness of Irish wool himself. But he hasn't heard of the Internet, much less eBay. Maybe I should just pop back out there with a laptop one day, and show him how to set up his own weblog?

In the meantime, I did what I could and bought one of his luxuriously soft fleeces, fresh from the back of a healthy lowland ewe. He put it in a nice clean sack for me and placed it carefully on the back seat of the car. Then he went back to the shearing, while I drove home with the soft scent of raw wool all around me. Whenever I spin with that fleece, I'll think of Dan and his dreams. 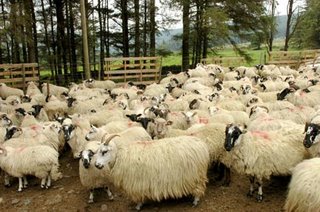 The yarn you'll yearn for this winter, at an early stage of the process.


Of course when I got the sack of wool home, my own little canine yarn harlot thought all her birthdays had come at once... 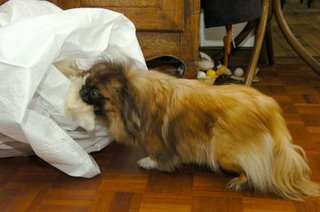 See that wild glare in her eye? The flash of white? 'Mine, all mine,' she's saying.

I like spinning wool 'in the fleece' or with all the lanolin left in. It makes for a much easier job, I have always found. The problem of course is when you get hold of some supersoft merino roving and can't handle it on the wheel at all. With some lovely roving I got from Warm Threads some time ago, after several failures, I found the only way to deal with it was to go back to the beginning and use a drop spindle.

Using a drop spindle is quite addictive actually. You slow down to the pace it dictates and so what you only spin a few yards at a time. It's a project you can take anywhere and work on for the shortest space of time. Plus it looks really good if you happen to leave it lying around, which can't be said of some other hobbies - cutting up glass bottles, for example, or taking old motorbikes apart. The latter always seems to require acres of floor space, a lot of newspapers and generous helpings of engine oil on every available surface; but a spindle and roving can grace a polished table, a dresser, even an armchair. NO, not the armchair! I am blessed with three very acrobatic mutts, all of whom have a peculiar passion for wool. Maybe they're really Chinese sheepdogs. I've never actually asked them. But it would definitely be asking for trouble to leave something so tempting at an accessible level.
Posted by Jo at Celtic Memory Yarns at 9:45 pm

Lovely post on Daniel P and his business. Sad but, yes, he needs to get into cyberspace.

P.S. Ed made a spindle using your picture of the monk as his guide. :-)

Oh yes get Daniel P on the Internet -- Was that Muffy in the fleece bag - that is one happy looking dog if it is. Maybe it works like doggy catnip??

Not sure who is cutest Daniel or his fleece.If you look up "Peruvian Connection" on the net ( an expensive chain of shops American owned but with one U.K store in Henley..of course) you'll see Irish knitted arans and scarves.One year they had Irish lace dresses.We get the catalogue just to look.I agree that a fine wool is one of the best and one of the two fat ladies said that wool is best in a damp climate as it's fibres swell and therefor close up making you reasonably protected .I think he needs marketing on the net and you are just the gal to do it .I don't spin alas but a lot of bloggers do.

Forgot to mention Jo that Kaffe did designs for Peruvian Connection..it's not quite Armani .It appeals to a different type of wealthy ,those whose want quality .good design but don't care about labels etc.

*laughs* your dog is so cute! A yarn terror, it sounds like, but how could you be angry at her with a face like that? =)

Glad to hear the sock is progressing, and sorry that magic loop defied you so much!

Oh! Yes! Get Daniel P. to sell his wool online. Or anywhere! When I visited Ireland in January of 2004 (my college roommate was working and living in Dublin), I searched high and low for Irish wool. Naturally, as a tourist, I didn't know the native wool shops and my roommate was not a knitter. She could tell me pubs, but wool, no.
I took one very memorable trip out to the Aran islands (Inish Man if I remember correctly- the middle one?). It was January, and I stayed with a very kind family in a most certainly Gaeltacht household. It was just me and her and her husband. As they watched Gaelic tv, Peg knit a sweater- without looking. I bought an Aran "jumper" from her- it's beautiful. She said it took her 3 days to knit it. Amazing. I asked about the wool, where could I get it. She said her wool came from the mainland from a shop. And mostly it wasn't Irish. That was a shame. I had planned to get wool to make a sweater myself. I still dream of making a lovely sweater out of Irish wool.
By the way, I found your blog recently through Two Sock Knitters and have enjoyed it immensely this afternoon.

Your article was delightful! Thank you@
My grandparents are from (Buckley/Duffy) in South Ireland and I am a hand spinner who likes to dye natural yarn with the local native plants of the Pacific NW in the USA here on Whidbey Island (I hear this island is a lot like Ireland in terrain and climate!) Nantucket rug hooking is one of my hobbies as is studying lichens...I hope to make a Forest Floor rug with wool from Ireland dyed with local plants! Best to you! Melissa Duffy