Is The WIP Basket Getting Out of Hand?

Another bright morning, but still no sign of the two sets of rosewood dpns from Scotland, nor yet the bargain yarn from eBay wool, nor indeed the Irish crochet pattern, bid for and won at such cost. Where ARE they? However, Postie did bring something rather important - the entry forms for Bantry Show. Now this means decision time. Bantry is a big show by West Cork standards, and it's probably the leader as far as arts and craft classes are concerned. Entrants take it very seriously indeed. Not as seriously as the baking contingent, admittedly. Only those possessed of unshakeable confidence and impeccable lineage (prizewinners on both sides of the family back to 1860 is about right) dare to enter for classes like Round Brown Soda Bread, Cherry Madeira (in a loaf tin) or Cold Tea Brack (8"). You see them walking up and down the aisles after judging, eyes narrowed, pens poised over programmes, as they note who has got the coveted red rosette this year, and who has been demoted to the green or (shame of shames) the blue. No-one who has not been born within sight of Bantry Bay would dare to gatecrash that sacred club.

But the crafts are a little more open and it's about time I took my courage in both hands and entered something. After all, it's practically my local show (Ballyvourney, Ballingeary and Coolea are fairly small, three-cow events which, though most engaging and pleasant experiences, are not in the same class as Bantry), and I have every right to put myself up for examination by the gimlet-eyed judges and public. The question is: do I make a start on that glorious Elann lace cropped cardi right now, with the aim of finishing it by September 3 (show date)?

I hauled out the Tivoli linen/cotton mix and looked at it again. It seemed a little dead, somehow, a bit lacklustre. Where's my box of glitters and glitz? Discovered a whole roll of very fine lurex in almost the same shade of teal. This lurex is probably all of 60 years old, having been inherited with the house, and in all likelihood originated in Paris where DH's mother was living at the time. It's in fairly good condition for its age, though, and blends perfectly with the linen/cotton yarn. 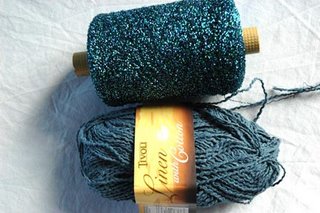 Full of enthusiasm, I print out the instructions and search for the right circular. Circulars in fact, since this pattern demands that you start with 5mm, move up to 5.5 after one ball and then onwards and upwards until you simultaneously reach 7mm and the end of the jacket. The house is screaming for some tidying, the washing up is abandoned, the garden has given up entirely and is aiming to emulate Act 2 of The Sleeping Beauty, but the lure of casting on and just trying one or two rows is irresistible.

I am beginning to wonder if I am taking this new freedom (i.e. to have as many projects on the go as I like) to extremes. I was lyrical with joy when I first realised (courtesy of Blessed Stephanie Pearl McPhee, original breaker of the mould) that there was nothing intrinsically virtuous about starting, continuing and completing just one knit project; and that conversely, there was something delightfully free and fulfilling about haring off in seventy-two knitting directions at once. (If, like me, you also incline occasionally toward crochet, double that figure.) But this evening, as I glanced over towards my WIP basket, I did begin to wonder... And so, setting my teeth (and carefully setting down the frightening heap of plastic rings and tangled yarn that is the early stages of the Elann jacket), I hauled the basket into the middle of the room and took out (most of) the projects inside, laying them neatly on the floor. Then I took a picture of the still-life. 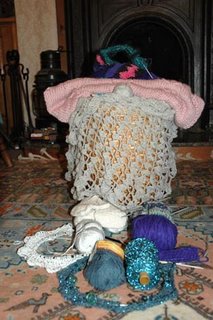 In front, as befits the self-styled star of the show, we have the start of the lace crop cardi. To your left (stage right, for the theatre buffs among you) is the beginning of the silver lacy top (I may have omitted to mention that I also got going on that today. Well, I needed a lot more comfort for the postal disappointment.) To your right, the purple sock using the two-circular method kindly passed on to me by Rho . Immediately behind that (almost hidden) the stripy Regia sock on 4 dpns, and to its right (your left) the alpaca crochet socks (are we getting a bit too much into the sock thing here?) Draped over the basket is the Karabella crochet shawl with above it, firstly the Debbie Bliss alpaca silk slipover or vest, and on top of that, the poor neglected dolman-sleeved jacket of many colours. And believe me, that's not all. If I were really to hunt through cupboards and drawers, open boxes that haven't seen the light of day for years, I suspect the Unfinished Projects found would fill the room and I would be able to open a knitting needle shop (anyone want 17 pairs of 5mm straights in old-fashioned metal or plastic, only slightly bent?).

It's like those days you feel like checking out your library and you go round the house pulling markers out of books that you'd started and left unfinished. Sobering, isn't it? Particularly when you find markers made of receipts dating from 1980.

Anyway, by my calculation I have not only not finished anything, I have, in the last few days, started at least five new knit projects. And when the dpns and the eBay yarn and that laceweight from Eastern Europe (must have forgotten to mention that too, dear me), what can I do but make them feel welcome and useful?

I wonder what the chances are of finishing that lace cardi in time for Bantry Show?
Posted by Jo at Celtic Memory Yarns at 10:53 pm

hahahaha! not as bad as my house, i promise you! i have never been, and will never be a one-project type. in fact, i have a whole system of projects going at any one time, an intricately intertwined set of about 10 or 12 things are required to be in progress in order for the "system" to run properly.
i excuse and justify it (not that i have to) by explaining that when i am designing something there are moments of necessary pause, during which i need to think rather than act on a project. BUT i need knitting in my hands to think, so therefore at least another project is required. all the others just keep me from making my husband crazy.

And my sock is misbehaving again - and I have to figure out why before tomorrow's knitting circle...

There is nothing more joyous than picking new yarn and new needles for a new project...
I do that regularly and lightheartedly (spelling???), and then if I don't like the new project after a while, I frog... but I do know that also finishing up something can bring much joy as well!

Oh I love that lurex..a favourite colour . In fact all your projects look good .I hate stitch markers so use safety pins as the little ones get lost in some knitting .We were woken by the big knocker at 7.30 as the postie delivered three balls of Yo-Yo won on E:Bay ( rather a large parcel .Holly came into our room kooking like she'd joined The Black Panthers ( she hates her hair so any temptation to salute fist up went quite quickly...mumbled about wool and went back to bed ). It is supposed to cool down after a hot humid day today ..let us hope.

I relate to many of your knitting dilemmas and joys. i too was a one project at a time knitter, but now i "allow" myself to entertain a few. I do love finishing some- it is very joyous.
sock addiction has hit globaly! LOL
:-)

Oh, goodness, isn't the starting of new projects at alarming rates really the sign of a great knitter??

Of course, you are absolutely right, Purloined Letter. It truly is the sign of a great knitter and a superb artistic mind. It's just all those lesser creatures who try to hold us back by throwing ropes of invented rules and regulations around us because they're jealous! No more they won't!