The rest of you knew I'd get it, didn't you? You were all sitting there in your own corners of the global knitting village, laughing away and occasionally dropping a stitch with mirth as you waited for me to succumb to the dreaded addiction. Well I hope you lost a whole row and had to frog back to the rib. You could have warned me!

I know it's been said all too many times before, but you really never think it will happen to you. I saw myself (as I suppose others have done) as tougher, more sensible, less vulnerable to such things. I even had the confidence (tempting fate, as it turned out) to look the danger in the face and dare it to try and get a hold on me. 'Not a chance,' I said, laughing airily as I passed on to better things (that Anny Blatt jacket, now all done except for the second sleeve), the Karabella crochet shawl, the much-neglected dolman jacket in all colours of the rainbow, the Debbie Bliss top...

I'm not trying to make excuses, but it sort of crept up on me, as these addictions do. You may recall that I howled and harangued and snarled all over my weblog and on several knitting forums about the idiocy of making these complicated little things. I made particular mention of a method akin to the worst excesses of Spanish Inquisition, known as the Figure of 8 Cast On. I asked how anyone could possibly want to spend so much time on something that took so much blood, sweat and tears, and that anyway could be bought for a few pence. I enquired exasperatedly as to what exactly was this irresistible lure of socks.

I suppose that was the open invitation to Fate, who happened to be passing by and heard me throwing down the challenge. Someone kind on Knitter's Review suggested a nice easy way to get started, bypassing that imp of Satan branded with 8. I found some lovely old dpns which had been well used by my mother in law. I decided to just have a little go, show that I could touch it and then leave it alone. Just proving my point.

The worry didn't really set in when I found myself knitting on the bus to town, nor yet when I took the project out in a traffic jam (no, no, DH was driving at the time, honestly). It seemed quite reasonable to do just another row or forty-five before bed, even though the stars had given up and dawn was in the sky. I think I was a little surprised at myself when I bought a bright green toy just so I could get hold of its sturdy little plastic bag to hold my precious sock. (You observe, by now I was calling it 'precious' - shouldn't I have been warned by the example of Lord of the Rings?) . I even hauled out from the bottom of the WIP basket the cute little crochet socks I started last September in British Columbia (oh these are well-travelled socks, even in their infancy). It's a beautifully soft alpaca yarn and already they feel so snuggly. How could I have neglected them for so long? 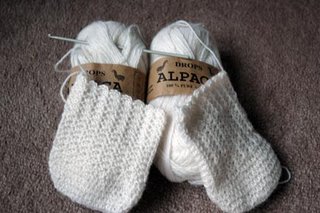 Last night a few of the abandoned items (jacket, shawl, top, others I haven't actually told you about because I'm a bit ashamed), called plaintively as I wandered past, little bag clipped to belt, 5 dpns clicking. 'What about us,' they pleaded. 'Are we to be left here, forgotten, devalued in the face of your new trendy friend?'

I was cross about that and told them there was no question of trendy friends. 'Sock knitting is so last century, so passe,' I said. 'I can give it up any time I want.' And to prove it, I typed in 'sock yarn' on Google.

There were no claps of thunder, no lightning flashes, no voices from the sky shrilling with triumph. The feeling I got as I stared at hundreds, thousands of entries, was one of ... exhilaration. I felt - yes, I'd better admit it truthfully - that I'd come home. The mouse had a volition of its own as it fled to Simply Socks . Who would have thought that there was a whole online shop devoted to sock yarn? Dear heaven the choice! The colours!

It was only when my online basket was half full with delectable treats and I was scrabbling around my bag for my credit card, that reality struck. Who was I fooling? I wasn't playing around the edges any more. I was in - way in, right over my head. And I couldn't give it up. I got belligerent. Why should I give it up? It's my party, I can knit socks if I want to. Lots of socks. Lots and lots of socks. All at the same time if I so choose.

Get a grip, I said sternly. Log off. Go to bed. So I did. But this morning I was out of bed at cockcrow and online again, ordering that divine Interlacements Tiny Toes mixture of blues and purples and greens. Then, as if Fate were determined to do the job properly, I was sent a link to a very helpful site for Magic Loop, by another Knitter's Review friend. I'm so wound up by now I can't find who sent it, but you know who you are and please get in touch again - I owe you! This link on Knit Addicted had such clear instructions that it hit me like Paul on the road to Damascus - I can do this, I'm sure I can. I can do this!

That ball of soft black sock yarn - where is it? Oh hell, you need two balls for the double-sock-at-the-same-time trick, don't you. Where's the nostepinne? I even carefully weighed the ball and kept it on the scales while I wound off half on to the nostepinne, to be sure of getting it right. 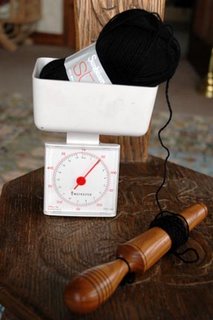 Half-way through I stopped. Hang on, this is a 50g ball - won't that mean I'll have to buy another ball half-way through, and there will be KNOTS in the socks. Are knots acceptable? Will my life work be ruined if there is one tiny knot in each?

'Gotta go out,' I called, grabbing my bag and heading for the door.

'You're not going to buy more yarn, surely?' said DH mildly, putting down the dog he'd been combing.

'Of course not,' I snapped. 'Why would I do something like that?' (Yes, I know, this is another characteristic of the hopelessly addicted, isn't it - the denial, the refusal to admit the problem?)

I had got as far as the car when common sense struck. Of course I could get started right away with the current ball wound into two sections. After all, how do people manage when they make striped socks? Knots all over the place, I shouldn't wonder. I admit I still looked longingly at the car - there is this urge to get another yarn fix whenever and wherever the opportunity arises, isn't there? But it was a long way to town and it would have taken up a lot of good knitting time. so back in I went and resumed winding.

Found an extra-long circular at the bottom of the needle box and had to soak it in hot water to unkink the cable. Gosh, 2.5 mm does look very thin when you're used to big chunkies and heavy yarn. Still the excitement is driving me on. Get this post on the page and I'll cast on. And heartfelt thanks to all of you on Knitter's Review Forum who said 'use any cast on method you like as long as it's loose.' I owe you too. Can't wait to see how it works out.

So... that means that right now, quite apart from the WIP basket, I have in hand:

One sock in variegated Regia on dpns, half way down the leg (the first-born);
One pair of soft cream alpaca crochet socks, origin Vancouver Island, coming up from the toe, neck and neck;
One pair of black socks in St. Ives yarn, about to get going via the Magic Loop method.

Well that seems quite reasonable to me. Didn't someone say you can never have too many pairs of socks? And the Interlacements yarn shouldn't arrive for ages anyway. Hope those two pairs of dpns from Scottish Fibres don't take too long, though.

Oh dear, you have it bad -- and I hate to add to the addiction - but I HAVE to tell you that Simply Socks is wonderful - the customer service is super - I ordered some yarn and within an hour had an email that the last ball of that had sold out so I went back to the site and found another yarn I loved (not hard to do there is it?) and changed my order and had it quickly after that. Just remember that the theory is that sock yarn doesn't count as stash you know -- :D

I know it's only a matter of time ...it's probably in my body ready to take over at anytime.Of well not so bad I love all the "Lorna's Laces" sock yarns and I do wear trizzers most of the time. ( I think that was Steve Bell's version of how H.R.H Charlie says trousers. I have some fun-fur socks I bought ( like Elle Plume ) and they are really soft and warm . I'd love to knit Holly some vintage stockings some day .I love the "white Lies" designs and they do gorgeous lingerie patterns. Never mind little W.I.Ps , Mummy has a new baby and she still loves you .

Rho, did you have to give me even more reasons to order LOTS from Simply Socks? Are you sure it doesn't count as stash...?

Angie, I LOVE those White Lies stockings. And the lingerie - imagine knitting all your own lingerie in fine silk... Ah for the days of yore...

Thanks for sharing your addiction journey. I'm sure a lot of knitters out there can identify. I know I can!

I do Jo ..these days you can only seem to buy nylon mesh ( Holly and I call them cheese-graters).Holly bought a 1984 Vogue and it was fill of Gossard ads. for silk French knickers,camis etc.Hols fell in love .I am going to try to make some cotton lawn bloomers for her to go with her 1920's dress ..not knee length about mid-calf .

Ha! You have it bad!

There should be a law that sock yarn must have warning labels.

Thanks for the links to the simply socks and the magic loop. Two simultaneous socks are better than one at a time.

What a pretty crochet sock pattern.

i just dicovered your site through fiberjoy—wow! what a wonderful journal of wool. thank you! i am putting it in my newsgator

oh hahaha! you ARE hooked. i've been finding that the small producers who do their own unusal things to sock yarn have the best yarn and the best prices!
here are a couple more great fiber dyers to check out
http://fearlessfibers.blogspot.com
http://www.briarrosefibers.net/
http://www.angoravalley.com/yarns/yarns.html
http://sweetgeorgia.planetfishdesign.com/
and a retailer
http://stores.ebay.com/emtnestr_W0QQcolZ4QQdirZ1QQfsubZQ2d999QQftidZ2QQtZkm

Hey Anne, lovely you could stop by. But will you PLEASE stop putting more temptation my way? Perhaps you are trying to test my will power? Yes, that must be it. I will be strong, I will be strong...