It was rather nice to leave the stifling heat of the desert (getting up over 100 in Borrego Springs) and head for the cooler hills, although the stark beauty of that dry landscape will remain in the memory. How do birds survive with so little? 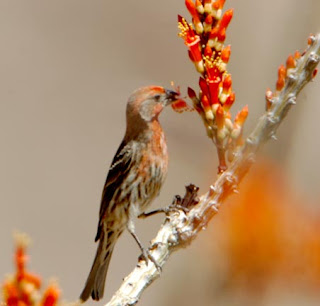 This house finch obviously had good colour sense, choosing blossoms which toned well with his waistcoat.
And even in the driest sandy areas by a roadway full of fast-moving trucks, wildlife was thriving. 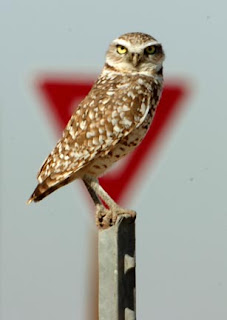 As we climbed into the hills, the sheer unrelenting pitilessness of the badlands was frightening in its beauty, and DH kept stopping to try and capture it. 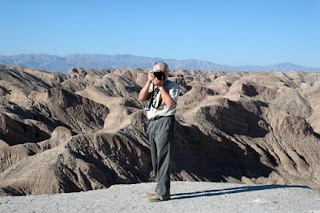 Here, for the first time, the very first time, a snatched shot of the elusive Photographer Photographed! It isn't something he is too keen on, preferring to be the one who does the stalking, so make the most of it, there isn't likely to be another!
Julian, up at 4,000 feet, is a cool and lovely place, and we stayed a quiet night there, delaying in the morning to pay our respects at Mom's Pie Shop where Michelle was in full St. Patrick's Day regalia. 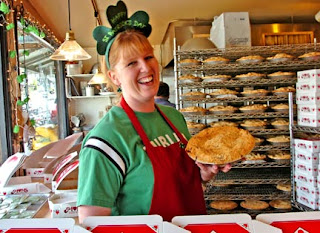 This is one great lady; she lives here in Julian with her two daughters, bakes for all the fundraising local events and still finds time to laugh while running Mom's Bakery. She has a great fund of family history anecdotes: her great grandmother came across from South Dakota in the 1920s when almost everyone there had died of the flu epidemic. Great Gran just lit out and trekked across to California, where she determinedly opened a beauty salon in San Diego. Go it, great-gran! I told Michelle she should write all this down without delay - are you listening, Michelle? 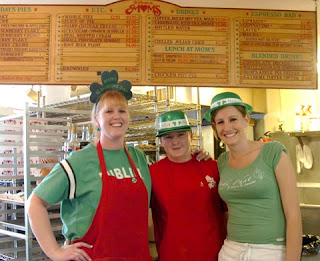 Here she is again with her hardworking team. You can't see it in this picture but the lad in the middle has even painted his shoes green in honour of the day.
Just outside town we found Mountain Beadworks 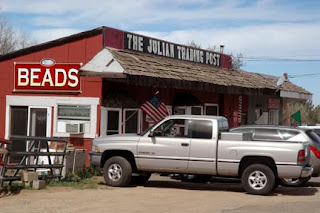 which was doing good business this fine St. Patrick's morning 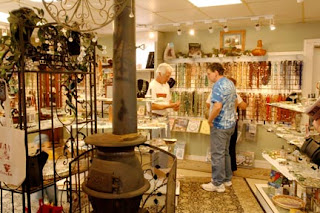 and where smiling owner Patty Strong showed me the most fascinating things you could do with knitting needles, wire and beads. 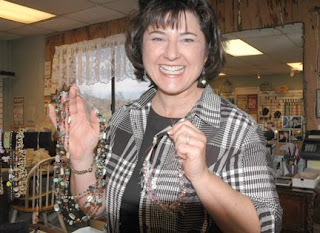 You probably know plenty already about this particular branch of knitting, but I haven't got round to trying it yet. She had all the supplies, all the beads - oh Lord, did she have the beads, too many kinds for keeping a sane head - and was demonstrating to a customer a great idea with the old spool technique - although she did warn me that it was a beast to do and you needed a spool with a really wide central hole (found a good plastic one with the required dimensions later on in a branch of Michaels). 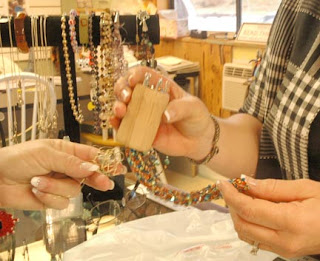 What I loved about Mountain Beadworks (apart from the lovely old-fashioned atmosphere and friendly welcome from both owners and dog) was that they gave their opening hours as '10-ish to 5-ish' but also had an Emergency Bead number for after hours! I'll be back.
Across country through Escondido and on to the coast at Encinitas, to visit Black Sheep a LYS highly recommended by Pacalaga (thanks Carrie!) Now this was a real treasurehouse - 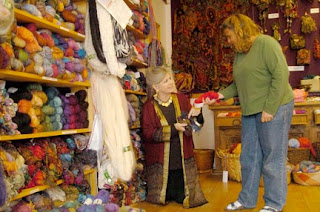 That glamorous lady on her knees is owner Karen Henderson, and Christy McCartney is trying to decide on which skein of Prism to bankrupt herself for. Yes, they have all the stunning Prism yarns and colours, plus all the other gorgeous brands. 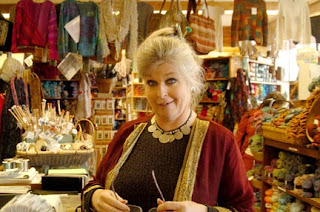 Karen had some great stories too - one she had heard about her grandmother's time, during one of the World Wars, in England, when all the women knitting at the cinema were told to move to the back because the noise their metal needles were making was drowning out the sound of the film! Isn't that a great bit of folk history? More, more, Karen, please! Publish a little book to sell at the shop. I loved the idea that it was OK for women to knit in public then, because of the war effort - you'd get a few looks in the UK now if you knitted at the cinema I can tell you.

Huh? Oh yes, perhaps a few skeins were bought. One or two unconsidered balls of yarn. Hardly anything, honest. Well - oh look, I'll photograph the loot later when it brightens up (a bit cool and cloudy this morning in San D) and let you see it. Didn't spend that much really. Well it's holiday time, isn't it? Been working very hard. Entitled. And DH was elsewhere, happily browsing computer shops, so I had to do something, didn't I?
Today we go look at places around San D, some for DH to feed his birding addiction and some for me too (Bonita Knitting anyone? Open on a Sunday, love a shop that does that). And this afternoon, to Balboa Park to meet Vicki, a friendly commenter on this blog, who will be spinning in House of Ireland there. Yay, reality meeting another friend from cyberspace!
Posted by Jo at Celtic Memory Yarns at 4:01 pm

Jo, it sounds as though you're having the most amazing time! That bead shop was wonderful - I love the 25 cent bead dispenser, so much nicer than gumballs. :0)

Looking forward to seeing all the yarny goodness, too!

What a wonderful, ideal trip. Birds, yarn shops, scenery, beads, nature, speed knitting contest, Michael's, blogging. Whew! Suppose you feel that you must stock up on all this before returning to beautiful, quaint, but thin on yarn/bead/Michael's Home-Sweet-Home.

I love the "attitude" of the bead shop; 10ish/5ish/emergency bead number.

The photographer has been spotted! Sort of like the elusive spotty tufted whatchamacallit. Richard, the owl photo was simply amazing! Where can one see more of your nature photos?

Oh, no, Jo! Do you know what's happened? We've been paired up as competitors on round two of sock madness. You were the one who tipped me off to the madness so it feels cruel that we have to be in direct competition. I guess the good news is that I'll be happy either way, because no matter what happens, one of us is going on to round three.

Great post today! Wonderful stories and pictures, as always. I'm so glad you're enjoying your travels.

What a delightful day ... and a rare snapshot of the elusive Photographus Richardii on the hunt! Funny, I was wondering why we never see a photo of him.

I hope you found a decent Amercian beer to toast St. Pat's Day? There's a lot of fine microbrews out no the West Coast.

Hi Jo, havent you heard of Knitflicks, some cinemas...around the UK are doing special screenings at cinemas especially for knitters to knitalong too! Lovely photos as ever!

What a wonderful holiday, indeed! So exciting to see where you are, where you've been and of course looking forward to the 'where you'll be next'.
The photos are stunning, as usual.
Happy travels!

Oh, I'm so glad you made it to Black Sheep! I showed up there shortly before closing time, without realizing it, and the DH went to find diapers (nappies) leaving me to browse. It was well past closing time when they asked if I'd like to buy anything, otherwise they'd close out their register, but "no hurry". !!! I did buy the book I was reading, and they kindly allowed me to stay in the store and fondle things until DH got back from the diaper run. SO. NICE. (And fantastic yarn, too!)

oh boy! i've been to julian on a trip a number of years ago and we ate at the pie shop too! it's a onwderful town, but the national park is the real gem . . . i have a few small rocks from there . . .

What a fantastic holiday - The scenery is amazing. The folk sound friendly and beads and yarn to die for. Lucky you.
Knitting in public? I knit EVERYWHERE!
Brilliant post. Thankyou!

Want To Boost Your ClickBank Traffic And Commissions?