Mad Cow was the right title for the famous first round of Sock Madness - that first pair may be finished, but I simply can’t stop knitting. Now on the second pair, this time in shades of hot pink, very suitable for the sweltering weather out here in the deserts of So Cal.
The intensity of marathons like this does tend to take us novices by surprise. You might say loud and clear that you’re in it just for the fun, for meeting others, for getting unique and one-off new patterns, but once the thing gets under way, you find yourself knitting frantically as if nothing else in the world counted (and it doesn’t right then, believe me, it doesn’t). I knitted on the hoof - 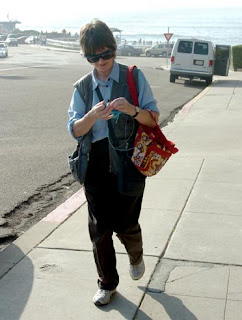 I knitted while watching baby seal pups on the beach... 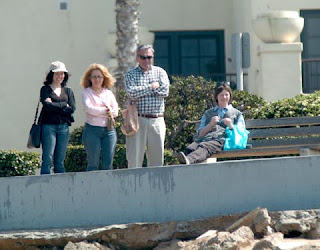 I knitted talking to those lovely girls having a SnB in the La Jolla cafe... 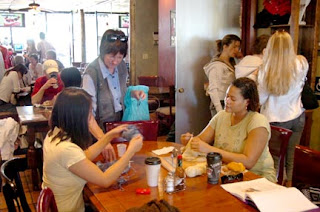 And each evening when we arrived at a new motel room, it wasn’t a shower or a rest or even dinner that occupied my mind, but GETTING ON WITH THOSE SOCKS. 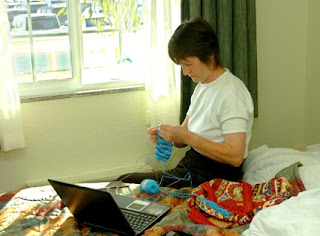 In between, we did drive through some absolutely stunning scenery, the total opposite to that which I see around my home in Ireland, which is what travelling is all about, isn’t it? The contrast to lush green dampness was breathtaking. 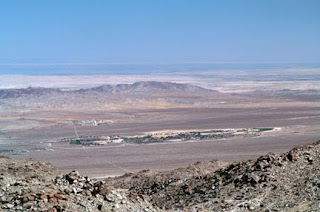 This is coming through the hills down to Borrego Springs, an oasis in the dry desert where we paused awhile, wandered through wild canyons looking for roadrunners. Richard has a particular quest in mind on all trips, which is getting the perfect picture of this elusive bird. Ok, ok, so for you, if you live in So Cal, it isn’t elusive, it comes round to the back door for breakfast, does little dances on the lawn, even takes the kids to playschool and brings back the groceries when you’re busy for all I know, but for us it has always been maddeningly absent. We didn’t find it at Borrego Springs, although, since I’d finished one sock by then (knitting whilst your DH is driving is quite doable, I found to my surprise, especially on one long circular which lessens the chance of tiny breakable dpns dropped underneath your feet), we were able to photograph it in a really nice National Geographic-type setting. 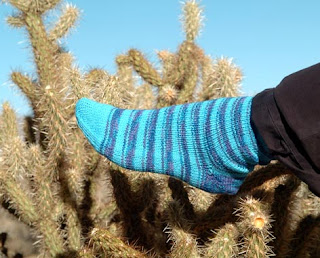 As Seen On Flickr: first ever captured image of The Desert Sock.

When you’re used to grass growing seven inches every time you turn your back, and having to hack down brambles every day to get at the pond, the sparse vegetation of the desert is something of a shock, but all the more striking in its beauty for that. 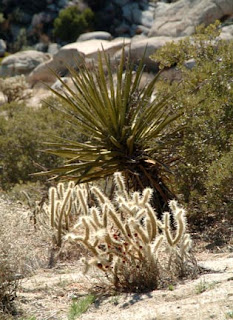 We were headed down to Richard’s special destination, a place he has always wanted to visit, The Salton Sea. This amazing freak of nature, formed, as I recall, when the Colorado burst its banks and took a new route for itself back in the 1920s, is a vast salty sea in the desert which naturally attracts millions of birds on the flyway north and south in the migration season. Over the years it also attracted thousands of visitors, flocking to enjoy endless sunshine and sea, and built up quite a tourist industry with marinas, RV parks, the lot.

Only trouble is... industry came too, and with it pollution. Now the Salton Sea is - well, how does one put this nicely - a huge simmering dark brown mass of stinking putrid liquid. Dead fish bob in the wavelets until they decompose enough to sink and add to the thickening layer of goo. And the smell - well, suffice it to say that I can still get a waft of it in the car, from the dust, the sand, whatever got into the vehicle, a full 50 miles away in El Centro on the Mexican border. 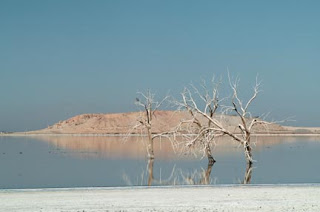 It has a strange eerie beauty, and the birds are certainly here in great numbers - white-faced ibises, egrets, herons, gulls, white pelicans, all floating in great skeins (Skeins? Skeins? Should I wind them up? Have I gone five minutes without knitting?) across the glittering sky - but it is difficult to concentrate on holding the binoculars steady when your olafactory senses are being assailed by a 30-megaton strength of hydrogen sulphide.

The Mad Cow socks got finished, finally, down here in El Centro late on Tuesday night, and were duly photographed outside the Best Western, next to a cooling fountain amid pansies (that hadn’t been dead-headed in weeks, poor things, I did as many of them as I could to show I cared). 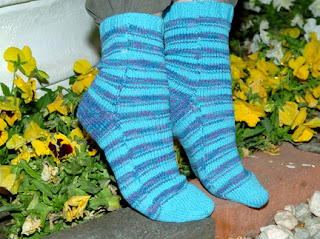 Nice and calming - but this is what the situation really looked like as I tried to balance on one foot, putting my shoes back on, as we dashed to get the image on to the computer and on to Flickr to qualify for the second round. Whew, this SockMadness is doing incredible things on my computer learning curve, never mind the short-row heels! 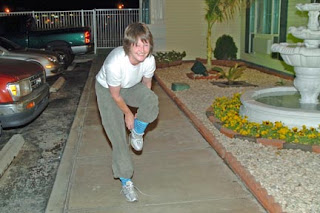 We’ve been driving up and down to Salton Sea since then, taking deep breaths of clean air before getting within scenting distance and gasping with relief when we leave again, Richard scanning for that elusive roadrunner while I knit compulsively on Mad Cow Mark II socks. When these are finished I’ll be able to swap them around with the blue ones, wearing one of each colour on each foot which is something I’ve always wanted to do. Show you a picture when they’re further on.

And that pesky bird? Well, eventually - 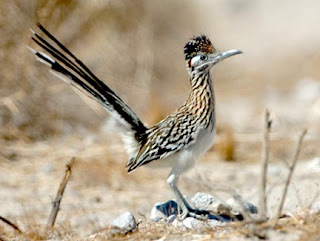 What a crackeroo. Worth waiting for. This one was so full of testosterone and territory guarding that he was scurrying round his stony boundaries and leaping up on every post to make sure no rivals were within reach.

Today we head back through the Borrego Desert and up towards Palm Springs so Richard can check out the Living Desert Wildlife Park (yeah, more roadrunners!) Then back around on the eve of St. Patrick's Day to a particular favourite place of mine, Julian up in the hills. Julian is cool and full of trees and the temperature drops sharply at night. Plus they are famous for apple pies and have a great secondhand bookshop. AND on Saturday morning my absolute favourite cafe there will be handing out green hats and shamrocks. Onward The Mad Cow Socks Take Two!
Posted by Jo at Celtic Memory Yarns at 3:16 pm

Your posts are making me homesick! I'm a native So. Cal girl, and I'm really missing it about now---especially the beach! Your socks look really lovely. The colors are great---they look very beach-y!

I LOVE Richard's Roadrunner. Assume you are familiar with the vintage cartoons of Wiley Coyote and the Roadrunner? Have thoroughly admired your competitive spirit on the socks. Congrats. Do you know the Palm Canyon just outside of Palm Springs? On the Indian reservation? Well worth the visit. My favorite thing in the area and a lovely excuse for some exercise.

You look like you are having SO much fun out there in the desert. I love the desert for the same reason -- it such such a contrast to our botanical overabundance here in Louisiana.

The sky is so big and the desert just swallows you whole.

I love roadrunners! Great photo. They range into east Texas and are sometimes spotted in NW Louisiana near the Texas border. I was going to tell Richard to look for tracks, they look like little X marks, but he probably already knows that.

Have fun on St. Patrick's Day! I wish you were here!

A pair of socks in a few days, whilst pursuing roadrunners. Roadrunner magic. Wish I could dash around with you. :-) When are you heading to Oregon? (Fingers crossed, but not holding breath.)

Sounds like a great adventure you are having. Thanks for sharing it all with us! I am eagerly awaiting round #2. Enjoy your trip!!!!

Oh what fantastic pictures , as you say so differnt to your's & my green and wet homeland. The photo of The Salton Sea is fabulous but what a shame about the pollution.Oh and just to remind you of what you have left behind they are calling for snow for the weekend after having had a couple of Spring like days .
I love knitting on our holiday as DH drives the motorhome and I get so much done whilst enjoying the scenery.
Hopefully now that we are through to the next round we will relax a bit ? No way can I keep that speed up !! I do wish we had dates to work around as we are intending to go away soon so I may not be home to get my mail . Ah well, whatever ,I am enjoying doing my VLT shawl with your yummy yarn and spinning some lovley fleece for yet more socks. Have fun & I look forward to hearing more about your travels

My hubby grew up in El Centro. He says it can get up to 120 in the summer. Love all the pictures. Two years ago the desert got tons of rain so there were flowers every where. Wish I could have gone down to see.
Enjoy the rest of your roadtrip. I love roadtrips. Your doing great on your socks. I'm glad I didn't join up with the rest of you. Must check out the photos on Flickr.

Hi, Jo. Deborah (Angeluna's cousin) here. I so enjoyed reading your post today. You describe so well and winsomely the intensity of the competition. It took me by surprise too. But it was an interesting state of mind, when "nothing else really matters." I'm looking forward to doing it *again* for round 2 -- (Did you ever think you might say *that* and mean it?!)

I, too, got caught up in the Sock Madness. I don't normally think of myself as competitive, but I worked every spare moment on getting the socks done. I'm not sure that I can keep it up for too many more rounds. I'll do my best, but at worst I'll have plenty more socks.

Your trip looks intriguing. We're in the middle of a massive drought here, so the dryness you are amongst doesn't appeal to me as much as the green thoughts of your homeland.

Making me homesick. Another California Native. But do you realize you didn't need to go to California to see the Roadrunner, we have them all over the place here in Arkansas.

We are going to green party to for St. Patrick's Day/

You're too funny. And so is Richard, taking all those photos of you in your sock madness. So pleased he caught his roadrunner.

Great sock, I'm glad you finished it on time. Look out for those cacti though! They don't call them jumping cactus for nothing. Thanks for the pleasure you give us, Tracy

Nearly forgot "Happy St. Patrick's Day" to you and yours and all who celebrate all over the World .

Wonderful pics - what a fab holiday you're having!
And happy St Patrick's day, too.

hi! on what kind of needles do you knit the socks? and where do you buy them in ireland... i live in co. dublin and haven't found a shop yet, with double point needles or a less than 90% acrylic yarn selection!