Spinning By The Light of the Moon

Tonight we managed to achieve it at last. It was after 11 pm when the moon finally rose high enough to be visible above the trees, and I hastily seized the new Ladakhi spindle all the way from Jenkins Woodworking in Oregon and some soft merino top, and got right out there. To do honour to the occasion, I even hauled out my traditional West Cork cloak with its huge gathered hood. And DH, bless his heart, clicked away while I spun, until we were both satisfied - me that the first ever new prototype Ladakhi spindle worked beautifully, and Richard that he had captured the moment appropriately. 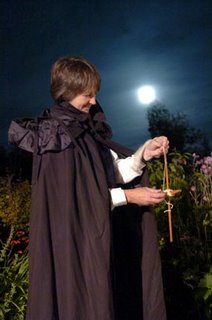 There has to be something magical about yarn spun under the full moon. It's going to be used for something very very special. Wanda and Ed, the spindle is an absolute joy to work with. I kept a strong twist on the yarn to start with, as the merino roving was very soft and delicate and I, as I have mentioned before, am more used to working with wool that's still 'in the grease', but after a while I was able to relax and let the roving move with the spindle as it wanted to. I know a wheel does it quicker, and is lovely to work too, but yarn made in this timeless way somehow seems to create an incredibly close partnership of of spinner, working tool and material.

(I should also perhaps observe that clear moonlit nights aren't all that common here. Even in this picture you can see a few clouds hanging around waiting to obscure the moon. I wouldn't necessarily want to keep this yarn and this spindle only for using on such rare nights. It would take quite some time to get enough for a field mouse's scarf done.)

I have got to stop starting new projects. Today I should have been persevering with that Elann lace crop cardi which has to be finished in time for our equivalent of the State Fair, Bantry Show at the beginning of September. But instead I played around with that cabled silvery cotton top (I showed you the pattern in my last posting) and then made a shamrock motif to join to that rose motif I'd made in Irish crochet lace. 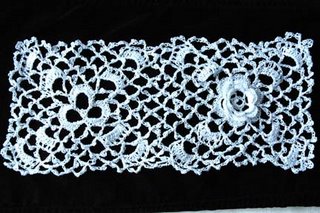 The finished top (no, I've moved on from the silvery cabled top, we're talking about the Irish lace now) will look beautiful. That's if it ever does get finished. I have to come clean at this point and admit that throughout my long and energetic life up to now, I have started on an Irish crochet lace blouse more than once - well, more than a dozen times in fact - and never completed any of them. I get so far, and then another, newer, more interesting project (usually in knitting) distracts me, or I get overwhelmed by the sheer amount of work still to be done. But I must complete it once in my life. It's one of those markers, like a diploma, a rite of passage, something to look back on and say, 'I did that. I finished it.' Maybe like that utterly
stunning moth wing shawl that Anne is designing - anyone who made one of those could feel justifiably proud. Have you seen it? Like a dream of gossamer lace. Fantasy land.

It wasn't so bad waiting until after 11 pm to do the moonlight spinning because we'd been out for the evening, at Gougane Barra, that magical hidden glen in the hills beyond Ballingeary. The local hotel there (you might remember Breda who wants to hold storytelling sessions in the kitchen), has put up a marquee in the garden for a theatre company which is staging The Tailor and Ansty all through the summer. The visitors are thronging in, and it's great to see tent theatre prospering here again. There was a time you could see tent
shows all over the country but they died out in the 1950s and 60s with the advent of television. England lost them even earlier, in the late 19th century; in America, though, I think you still have them in some regions, don't you? I once gave a paper at a conference in Mount Pleasant, Iowa, which was held in a museum dedicated to travelling shows. What a marvellous place! Someday when I have time I'll research the history of showboats and the plays they presented.

But The Tailor and Ansty. This is a recreation of a true story about an old couple who actually lived in Gougane Barra about seventy years ago. The Tailor was a storyteller, a shanachie, a repository of the old folk tales and traditional wisdom, while Ansty his wife was a feisty, energetic, busy foil to his relaxed style. Everybody came to visit their cottage and listen to the talk - my own parents loved to come out from Cork city in their young married days, and others travelled from even further afield. One visitor, an Englishman named Eric Cross, spent much time with the couple and wrote a book about them. In the book he faithfully reproduced not only the tales but also the simple earthy direct language of the Irish countryside where a spade was called a spade and a bull a bull. The Irish government was appalled at this perceived slur on the purity and nobility of the peasantry, and the book was instantly banned. Worse, some officious priests took it upon themselves to visit the tailor and his wife and force them to burn their own copy of the book at the very fireside where so many of the tales had first been heard. The bewildered old couple were heartbroken.

The Tailor and Ansty have long lain peacefully in the tiny graveyard at Gougane, but country memories are long; and when it was first announced that the play would be presented in the valley, everyone wanted to come and see it. It's been packed out every night so far this summer. 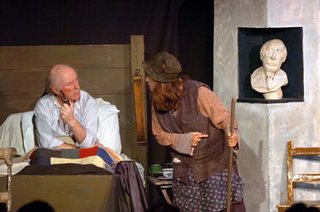 I loved hearing the tailor talking on stage tonight about the old ways of making cloth when he was a boy (in the mid 19th century).

'Everything was different in those days. There were none of the mills and the factories that there are now. In every parish there was a man called a clothier. When you would shear the sheep you would spin and card and warp so many pounds of wool for him, according to your family, and he would take it to the weaver and get it woven into flannel and frieze and bring the cloth back to you. The weaver had an old sort of measure called a bandel. It was two feet long and he would charge five shillings a score of bandels for the weaving. Now it is all statute measure, yards and feet, whatever good that does them...'

After the cheers had died away, and the valley was quiet again, I wandered across and leaned over the stone wall of the graveyard to pay my respects. I think they would have been delighted to know that so much love for them was still to be found in the place where they lived and died. I have a very old black and white picture of the real tailor and his wife tucked away somewhere. If I can find it, I'll show it to you next time.
Posted by Jo at Celtic Memory Yarns at 1:00 am

I love the picture of the spinning. The moon peering down through the gauze clouds is perfect.

Please don't expect you to wait until a clear full moon to spin again. I'm surprised the damp of the air didn't hinder the drafting.

The Irish cloth is very nice. I want to see a picture of you wearing the finished product, someday. No hurry, you need to work on Elann for Banty Show!

It's terrific that hotel is hosting local theatre and even more, that people are flocking to see the show. :-)

Jo - As we returned home from seeing "Kiss Me Kate" live at out local theatre last night, the moon was shining on Comox Harbour and I thought of you and hoped you had the same moon and got out to spin. Now at 10:30 pm my time, you would be safely tucked up in bed, but it was the same moon!
Love the story of the Taylor and Ansty. Thanks for the telling.

omigosh—you witch, you!! i love that picture.
and of course the story as well. i come from a long line of italian tailors. my mother's generation was the first not to have any—that was the first american generation. however, i seem to have inherited all the fiber sense of her ancestors! and from my dad's side, my typesetting skills (his dad).
none of these occupations were ever careers i planned on having—it just evolved that way (though i did sew and knit like an old lady from early childhood)!

What a magical ceremony for "christening" the spindle. Now, I will go all technical and ask how at that hour, you got so much light for you and still captured the stone wall and the moon?

And it was only how hot to be wearing your cloak - you are a dedicated blogger for sure.

Loved the pictures and hearing about the Tailor and Antsy - I felt so bad for them but then felt so glad that their story is being told now.

The full moon has certainly been lighting up our nights, hasn't it? Hearty congratulations to both the model and the photographer - it looks wonderful.

I've never tried that type of spindle (yet), as, although I have a few spindles, I usually revert to the wheel. Just love it.

The local theatre sounds very inviting, too. All of these traditions will surely survive as long as good folk as yourselves continue to support them.

When Holly was little a travelling barge Theatre visited Reading every Summer.They did Indonesian shadow puppets and it was magical. In the evenings they did Shakespeares Tales .They have a permanent home in Little Venice ( London).

Angeluna (what a lovely moonlike name), you are right, it took a bit of doing to get the lighting right! Richard switched on porch lights, and lights indoors, drawing back all curtains, and then used a flash extended way to one side held in one hand while he clicked the camera button with the other. I wouldn't have had a clue - I'm just the spinster. It takes a pro...

What a perfect picture! I love you spinning in the cape!

Im currently doing the irish lace squares you have pictured here in a class, and we're trying to source this pattern for the blouse. Can you provide any info at all as to who it was by or where you got it from? thanks!