I managed to get round to some quiet spinning late last night, using the fleece I got from the marvellous Daniel P. Buckley. I left it there in the sitting room until I had time to go back to it again, with Sophie the Sea Otter keeping an eye on it. Sophie, I have to explain, is my surrogate dog when we go on trips. (Those easily revolted may skip the next bit). I had noticed that whenever we were far from home, I was drawn to buying a soft toy. This began to get a bit silly, when the house was crowded with fat teddy bears, cute little furry bats, raccoons, and even a wild haggis from Scotland. I definitely didn't need any more soft toys cluttering up the place. Then I realised it was because I was missing the dogs so much. After that Sophie the Sea Otter came on trips with us. She didn't take up much room in the suitcase, and she was something soft to cuddle when Tasha, Muffy and Sophie the genuine weren't there.

Anyway I was down in the basement this morning, loading the washing machine, when I heard sundry thumps and bangs upstairs. I was puzzled, but went on with what I was doing until I realised with horror that I hadn't shut the door of the sitting room firmly last night. I took those stairs at the speed of light. Yes, it was Muffy again, the bould Muffy, and she was having a high old time in there where I had left my spinning wheel and the basket of soft tempting rolags. However - the fleece was safe. Muffy had sighted Sophie the soft, Sophie the cuddly, and the lust for possession had taken over. 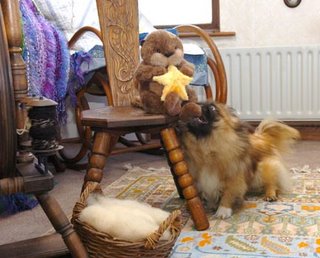 You are going to observe gently that it is most fortunate I happened to have a camera in hand. You are quite right. I didn't. I retrieved the situation and mentioned it to DH later on. He immediately and predictably insisted on restaging the incident so that he could get the opportunity to photograph it. 'She isn't going to do it to order,' I said pityingly. How wrong I was...

We discovered a thrush sitting on eggs in a tree down by the orchard recently and have been keeping an eye on her ever since. This morning (before the Muffy incident) we saw the mother bird sitting motionless in the little pond outside the dining room window, her eyes closed. 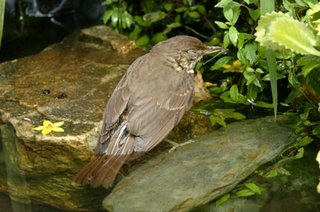 We worried she was ill but eventually she opened her eyes, fluttered off, and was soon back feeding the chicks. She had just been taking a little time out for herself, as any exhausted mother might do, and I was so glad we had been able to provide the private spa for her. That little pond gives so much good value. Often we get several birds down at the same time. 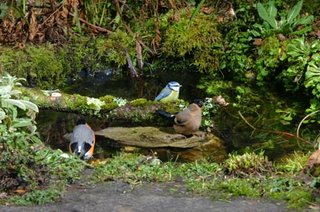 For those of you who think (as I do) that online shopping is Nirvana, a cautionary tale. I wanted to try Lantern Moon circulars, having heard so many rhapsodic paeans in their praise. And so I duly Googled. One very well known web shop offered them for $23. But it then transpired they wanted $28 - yes, $28, that is considerably more than the price of the needles themselves - for posting them to Ireland. Like they're that heavy? Now I know how much it costs to send something light from the US, because I order stuff all the time, so I said thanks but no thanks. Went across to Knitty-Noddy where I found the size I wanted at the same price, BUT with a choice of either $12 (extra fast) or $8 (pretty fast) postage. Went for the $8, and almost immediately got a lovely friendly personal email confirming the order and offering assistance on any other queries I might have. Good customer care, Knitty-Noddy, but that's not all. This morning I got another email from the lovely Evelyn at Knitty-Noddy saying that the needles were on their way and had, after all, cost LESS to post than she had thought, so she had refunded the difference to PayPal! Is that nice or what? A BIG clap and a gold star to Knitty-Noddy and three BOOS to the other company which shall remain nameless (but if you're in the market for yarns, so to speak, you'll find them on any search page...) 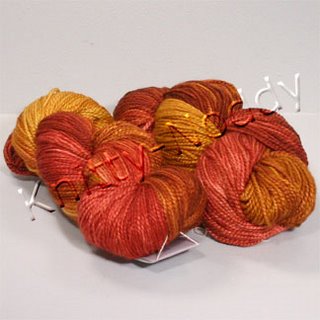 Swooned over this Lady Godiva wool/silk mix from Handmaiden which Knitty-Noddy had on their site. Can I live without it? Not for long, I can't.

I need those Lantern Moon circulars fairly quickly though because that dratted Elann lace crop cardi demands that you switch to a size larger needle each time you finish a ball of yarn. I'm using a severely kinked and rather short plastic circular at the moment and it isn't all that pleasant when you're used to rosewood. (Boy, does that sound pretentious! True in fact, but pretentious.)

All other sock projects (around three the last time I counted) have been laid on one side in favour of the utterly gorgeous little Enlacements treasures. 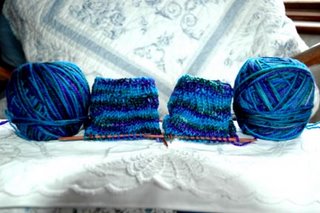 Aren't they coming on beautifully? I really love the way the yarn stripes itself without my having to do anything. And once you're past the rib, the stocking stitch is really soothing. I'm taking them everywhere at the moment, into cafes and offices, and very obviously knitting a row or two, since in Ireland the idea of anyone knitting in a public place is still a bit shocking. Socks should be created behind closed doors and only brought out when complete and ready to wear is the general idea. It's because we're still so very close to the time when you had to knit because there was no other way of obtaining socks, stockings, sweaters, everyday clothing. People are still a bit ashamed of the skill, feel that you shouldn't admit to it. But every time someone comes up and asks what I'm doing, or says that she used to knit those years ago and now thinks she might like to try again, I make a small private tick on an imaginary wall chart. (I realise you fought this battle ages ago in the New World and won it triumphantly, but we're still in the trenches here on this one.)
Posted by Jo at Celtic Memory Yarns at 10:44 pm

Quiet spinning indeed. I go to a spinning group each Monday night, and although everyone chats, there is always a part of the time where everyone is silent and the whirring of the wheels is really soothing, calming and, yes, hypnotic. The feeling isn't broken even when someone verbalizes it.
Each day, I look forward to reading your tales and especially love the photos. Did that thrush actually have her tail in the water as it looks (mind you, my eyes often deceive me)?
Love your not-so-sneaky dog, too!

Anonymous said...
This comment has been removed by a blog administrator.
1:29 am

Have you told Daniel P. how we are following the progress of the fleece you got from him -

Not only did Muffy perform on command but look at those eyes -- watch out Sophie the Sea Otter you're in for it.

You keep teasing me with that beautiful blue/purple wonder behind the spinning chair...

One of my friends at knitting group last night told us about your blog. Sigh... one more "must read" site to visit each day, and something new to share with my church ladies that I'm teaching or encouraging.

It's nice to know that somebody in Ireland enjoys Enya as much as my five daughters and I do.

Thank you for sharing your gifts with us.

I love the blue of those socks!! A vibrant, dancing blue.

Ha, Muffy was caught red handed, and she just won't learn. Sophie the Sea Otter is very brave to endure her rough housing two times in one day.

What a sweet pool for the birds and creatures. Is it a natural spring?

Hey this is a grown woman who at the age of 27 got lost in the Lake District and cried for Albert her Teddy Bear ..Jeff was with me so he was pretty sick !! He still tells Holly whenever Albert is seen on her bed .

you definately NEED that yarn girl:) and so do I but thats another tale. Wonder if I leave a link I'll get some for my birthday in 2 weeks?
amber in scotland

The socks really are coming along nicely! Yay! for Knitty-Noddy - in the spirit of word-of-mouth, I'll check them out!

those socks are wonderful. i found the same thing in france jo—everyone was curious about my knitting, but soon followed by saying that only grannies did that. but they still looked longingly at my hands, as if it were a fire they watched.

i wanted to teach each and every one of them to do it!