It doesn't really seem possible, but I'm in agreement with Wanda that autumn definitely seems to have arrived. Of course up where Lene is, it's probably freezing at night by now, is it, Lene? Anyway, here in West Cork the mornings are misty and cool and the leaves are starting to fall ever so slightly. That could be due to the unnaturally hot dry summer - the farmers can't complain about their hay, but are getting a bit worried about other growth, while we are keeping a sharp eye on our water supply from the well - but for whatever reason, it is time to start reaching for a second layer in the mornings before taking the dogs out. Not woolly sweater time yet, but certainly a little cabled cotton vest, a fortuitous find from a thrift store on Sanibel Island, Fl.

Do you search thrift stores? I keep an eye out for them wherever I go, and thought I was the only weirdo until I met several women Stateside who planned journeys the length and breadth of the U.S. to take in as many as possible. I have several English friends, though, who throw up their hands in horror at the very idea. 'How can you possibly buy something someone else has worn?' they hiss. I vaguely mention washing machines, and indicate their fragile Victorian nightdresses, purchased at great cost in antique costumiers, their piles of snowy Edwardian bedlinen, eagerly bid for at a stately home auction. 'That's different,' they huff. But you never know what you will find in a thrift store. It's a bit like life - you find lots of rubbish and then, just often enough to keep you hooked, a real jewel. Best of all are big piles of old knitting and craft magazines, although those can cause real trouble on the homeward flight.

And speaking of old magazines, I came across a lovely little pamphlet in a junk shop the other day. 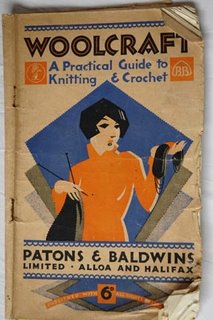 As far as I can date it from internal evidence (there being no obvious information) it's just pre-Second World War. There are marvellous patterns for baby, child and adult garments, including little frocks, bonnets, shawls, bed jackets, and even some rather serious ladies' underwear (oh for heaven's sake, serious underwear, not necessarily serious ladies - although I don't know...) OK, OK, OK, don't all shout at once. Here are some of the shawls and bed jackets: 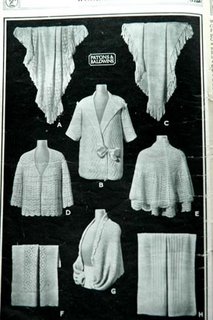 There are instructive one-line homilies at the bottom of each closely-printed page (you only get a picture to look at here and there, this is serious stuff, 1930s knitting), advising you, for example, that 'Beehive Real Eider Wool is ideal for shawls' (I expect it would be, anyone want to come robbing eider nests with me?); or, 'Baby Deserves the Best and Daintiest Materials - Beehive Lady Betty Fleecy.'

It also contains extremely sensible and practical advice on every aspect of knitting, from casting on to designing lace patterns. And yes, there are lots and lots of socks too. Plus stockings - gosh, I can remember being forced to wear warm woolly stockings in childhood winters, although I resented them furiously and yearned to have the kind of mother who let her child come to school in short socks and light jacket no matter how cold the season - honestly, my mother had no consideration! However, she did have a stocking machine, which made it all to fatally easy for her to turn out lengths of fawn depression (my school colours were fawn and green - really really exciting for little girls, yes?) Anyone here knitted full-length stockings? Seeing as how it's taking me all my time to get ankle-wards, how long would it take to go that long, so to speak? 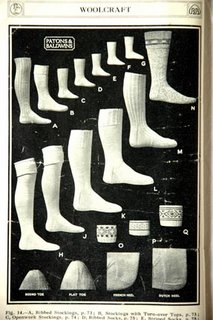 And just to impress you with how clued up housewives were expected to be in the 1930s, they really got into the toe and heel thing. At the bottom of the picture here there are illustrations for both round and flat toe designs, plus the French heel and the Dutch one. Above those are nifty designs from which to choose the top to enchant your husband, son or daughter.

It's only one thin little pamphlet, but it has absolutely everything in there you could possibly need. OK, it doesn't have gorgeous models posing, it doesn't have big print (something of a problem admittedly), or glossy pages, and it's a bit - shall we say severe in its dictatorial style. But it does have all you need. So why do I go on buying new books on knitting as soon as they come out? Why do any of us? The publishers aren't daft - they wouldn't take these on unless they knew they'd sell to complete addicts like ourselves. There is something about scanning a shelf and seeing, with a leap of the heart, a book that is completely NEW, that hasn't been seen before, that gets the credit card out and the treasure bagged before we have time to consider what perfectly adequate information may already be available in the seventeen floor-to-ceiling bookshelves at home.

Now that I come to think of it, in teenage days I faithfully subscribed to a now-classic called Golden Hands. It came out in weekly issues and I tucked each one into its place in a big folder. I don't think I've looked at them since. They've travelled wherever I have wandered - all six heavy folders - but haven't been opened. I only thought of them when I saw a pattern for sale on eBay last night and realised it was from Golden Hands. You remember (you mightn't, but take my word for it) the fashionable bookseller's habit of pulling old illustrated texts apart and selling the plates? Well apparently that's what they're doing with Golden Hands. I'm going to go right down to the library when I've finished posting this and drag mine out. There are probably patterns in there that I'd pay good money for now! It's only 39-40 years old after all. They can't have dated that much. Might even be back in fashion.

Stop waffling, you cry. You're avoiding the topic. What has happened to the Elann jacket? Well, I was sort of saving it for last. Wait for it. There's been a breakthrough! That's why this posting is later than usual. I spent all of yesterday in a feverish haze of k. 2 togs and yo's, determined somehow to make the end of the pass and get out into the valley beyond before the wolves closed in. And I did it! By late afternoon, when the dogs had despaired and taken themselves out for a walk round the garden, muttering under their breath about far fields beyond and thoughtless selfish owners, I finally made it to the desired shoulder length and was able to divide up for back, fronts and sleeves.

Ye gods, that was a tricky bit! So many on one length of ribbon for left front. So many for the sleeve on to a circular. Back on another, longer bit of ribbon. Ribbons, stitch markers - getting like a funfair here. Other sleeve - drat, do I have a second circular in the same size? Miracle of miracles, I do. But hell, it's kinked to all tarnation. Downstairs. Put on kettle (yes, in winter it would be simmering on the woodburning stove you little homelovers you, but not in August, however autumnal the weather). Wait for water to boil (it is a measure of my desperation at this point that I didn't even think of finding the little socks and working a row or two while waiting. I just stood there and hyperventilated). Flatten out kinked cable in hot water. Fish it out. Burn fingers (this is a metal circular, this second one). Test it. Still kinked. Back in. Out again. Burn fingers again. Utter the eternal phrase, 'Ah 'twill do', and hasten back to the chair of destiny.

After all that, I sat and knitted dozens of rounds of Milanese Lace on the first sleeve, terrified to stop in case I lost the thread of the argument, my place on the freeway, this narrow passage to freedom. (The instructions suggested working both sleeves at the same time on two circulars, but I know a deliberate and cynical attempt to shanghai a hapless knitter when I see it.) By the time I'd finished, I didn't even have the energy to photograph it as far as it had got. I had to leave that until this morning. 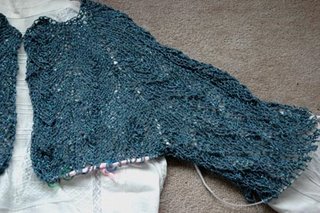 See it? Can you see a shape emerging, ever so slowly? That's a real sleeve over there on the right. Only another few dozen rows to do on that one, a bind off in Picot (no, don't ask, I hope it's in the instructions) - oh, and THEN the same thing all over again on the other side. Yes, I can see now why they suggested doing both at once. But I can also see where it would have led me. To the nearest bottle of strong liquor... Speaking of which - but no, I'll tell you about poteen another day.
Posted by Jo at Celtic Memory Yarns at 8:55 am

Thanks for a lovely mental image of your battles with that jacket. It does look lovely, though, so hopefully all the angst and burned fingers will be worth it.

Just got back from a thrift shop myself..nothing today but I usually find something. It's thrilling wondering what you might find.

I found your blog on Yarn Harlot's comment page. You're a good writer too! Thanks for the great images!
Good luck with the rest of the sweater - it looks lovely even on my fuzzy computer pictures.

YES!!!! I had faith that you could do it. Poor pups though wandering around thinking of all the fun places they could be other than their own yard. tsk tsk tsk

I cannot wait till I can lose enough that thrift shops hold many treasures for me to find. It is a long way off but a goal to shoot for :D I have hit many thrift shops looking for wonderful wool jackets to turn into hooked rugs though. Something that knitting took me away from - maybe someday I will finish the rug I was working on....

Poteen huh? hmmmm sounds promising -- please compare it to other spirits so I can have a good idea of taste...

a funny to end with -- spell check tries to turn Poteen into Pattern... LOL

oh JO! that sweater is awesome! i am sure you can finish it for the show now.i love it.
i have a large collection of vintage knitting pamphlets and books, which i began acquiring back when no one wanted them . . . i'm sometimes ebarrassed when i see what they sell for now.
let's just say, i've got my retirement covered, if my mutual fund goes pear-shaped.

Your Elann jacket is looking wonderful! Good for you. I love that pamphlet - it is similar in style to ones from earlier. I think it's interesting (and telling) that knitting patterns always focus on the finished product rather than the process - you never see pictures of people actually knitting. I adore a good thrift shop, and look for them when we travel as well.

Oh my, were I a judge, this is definitely blue-ribbon material. It is just beautiful. Worth every minute of effort.

Love thrift shops. But with time always short, do my bargain used clothes shopping on eBay. Let's call them collectors items. It's really a treasure trove for whatever you dream you might want.