Socks With A View

I find it difficult to believe now that back in the early days of blogging I demanded severely what on earth was so interesting about knitting socks. I didn't get it, I said. What was the draw, the attraction that created such obsessive behaviour among my fellow-bloggers?
Ah well, we all grow and look back on our childish foibles with amusement.
This is by way of reassuring you that Sock Madness is still very much on the go. As I write, there are about three and half hours to go to the first possible time for release of Pattern 3. Back in those early foolish days I simply would not have believed that knitters all over the world - hi Snidknits in Bangalore, hi Linnakat in Kenya, hi Norway Kate! - could or would be poised at their computers, yarn wound, needles at the ready, waiting for the moment that the pattern dropped into their email boxes. But they are, we are, and the pressure and tension and excitement that the whole thing generates has to be experienced to be fully comprehended.

It's going to be laceweight this time round, and Celtic Memory is ready - well, as ready as she'll ever be. 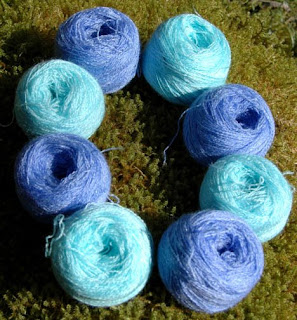 Here are eight tiny balls of cobweb-weight yarn wound and eager for the start. It's going to be one of those multi-stranded patterns, we think, where you move gradually from one colourway to the next by changing one fine strand at a time. We think. We don't know until we SEE THAT PATTERN.
Which should be here any time from 3 hrs 20 minutes on.
Celtic Memory has to fly off somewhere tomorrow morning extremely early - so early in fact, that it is a matter of some conjecture whether the pattern will arrive in time. Extreme gloom will result if it does not, especially as it passeth man's knowledge when said pattern's and Celtic Memory's paths will cross again for a few days. Enough time for everybody else to have passed her out on the racetrack and crossed the finishing line in the meantime. Ah well, let's be philosophical. No, let's not. GIMME THAT PATTERN RIGHT NOW, Y'HEAR?

The weather has returned to winter here in West Cork with shockingly unseasonable ice, sleet and even, on one occasion, a veritable blizzard. 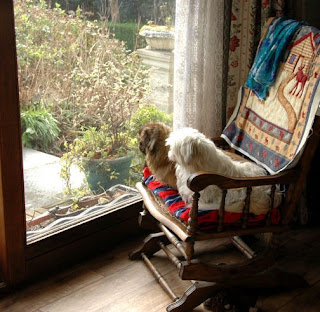 The dogs have been much disinclined to venture forth, preferring instead to watch the antics of birds and baby rabbits from the comfort of the rocking chair.

Oh I have to tell you something so exciting about the nesting birds! Don't have a picture of this one, because it really was so unexpected and to have picked up a camera would have shattered the moment, but just listen to this.

We had, as you know, put out lots of dog hair for the birds to take for lining their nests. This little coal tit - don't know what you'd call him in America, but he's one of the smaller chickadees - had come in to get a bundle. I noticed that he was taking ages tugging at the hair and wondered what he was doing. Do you know what he WAS doing? He was standing on a small pile of it, holding it firmly underneath one claw on the branch, while with the other claw he pulled out long fine strands. When he'd got a fine strand, he took it carefully in his beak, keeping it at full length, and went back to pulling out more. Eventually he had a whole light as air bundle of finely combed wool, and he flew busily off with it, well content with his work.

That coal tit was carding the wool! He was doing exactly what I do with my carding combs, only he was using the two claws nature gave him and making an excellent job of it. Why take home a big hard lump of fur when you could please your mate mightily by bringing soft lofty batting? I was so thrilled to have seen it, I had tears in my eyes. Of course the chance of seeing him doing it again is slight, but we're ready with cameras if he does.

Have you ever seen a bird doing that? If you have, tell me all about it. I love to see that instinctive behaviour which we had to learn painstakingly.

When the weather did improve slightly, took the in-progress Falling Rain socks out for a drive and thought I'd give you some Socks With A View. 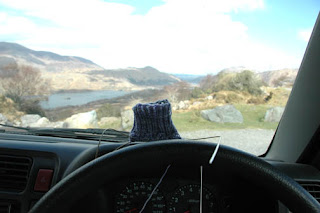 Here is one of them sitting happily on the dashboard, looking down at Upper Lake, Killarney. 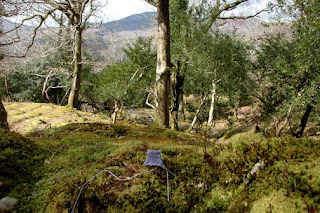 and here is the other reclining on the moss further down the road. I realise it's rather small in the picture but I thought you'd appreciate the background rather more. 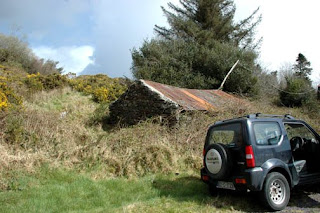 You can't see them in this picture because they're in my hands. I was wandering back across the lane from admiring some lambs in a field, and saw this adorable little ruined cottage absolutely begging for a kind owner. 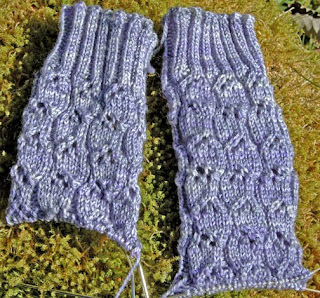 And here they are back home again, somewhat more progressed. Isn't this a lovely pattern?
Enough. Celtic Memory is off to bed, to rise again at the ungodly hour of 3.45 am. The email will be checked before she has to leave for the airport. Here's hoping that pattern is there. (If I got up at 2 am, it just might have arrived...)
Posted by Jo at Celtic Memory Yarns at 9:29 pm

Jo, your photos are delightful as ever. I hope the pattern is there waiting for you in the pre-dawn hours, good and safe travels to you, for now though, sweet dreams.

I hope it gets there in time! If not, I could try to text it to you. I suppose you'll just have to get one of those all-in-one phones that allow you to surf patterns on the go!

I, too, hope the pattern reaches you in time. A carding chickadee -- what a wonder!

I hope you got it before leaving!
That bird story is really amazing! I remember That Stephanie Mc Phee had a similar story with a scary squirrel who was stealing her wool!

I think the little birdie just goes to show that we humans aren't so clever as we think we are.

What a special experience to watch the bird combing his gleaned fur. A treasure.

Hope the pattern arrived in time and is well under way. Safe and pleasant journeys.

SockMadness is so totally mad! :-) I love reading about this global craze. Hope you got it for the flight!

Jo, your blog is one of my favorites! I've even noted your blog on my own this week in the randomness note. Safe journey and knit your heart out! I'm out this round but am standing on the sidelines cheering you and the rest on!

Ha- I have been so consumed with Sock Madness that I am just now reading your post! The Coal Tit is very cool! We used to have birds that look somewhat like this in our garden in California- I know my father-in-law, were he still alive, would be able to tell me if the two were related in any way. I am sadly clueless as to which birds are which (but you should see me identify yarn!)

Anyway- hope you are doing alright with pattern 4- haven't seen any of yours yet... Toodles!

Hey - I love your blog. Just discovered it. Muffy and Sophy are soo sweet. My pup likes to watch the squirrels and the passing dogs. I'm going to put her fur, next time I brush her out, out to see if the birds are interested here in Canada!

From the pictures I found online, I'd say your coal tit is our black-capped chickadee.

I hope the pattern arrived in time...

Perhaps we should styart a movement to rename the coal tit, "wool tit." What a lovely story and how lucky for you to witness it!

Beautiful yarn. I know you're in the midst of Sock Madness (I will sign up next year, I will!) so I'll keep it short. Thanks always for your lovely posts.

Jo, I am so happy to have just now found you (better late than never:)and to have found Celtic Memory. If it hadn't been for the email from knitty about their new contest I would still not know of your existence. I was scrolling quickly through the list of responses to their post when out jumped the word "Celtic". Lo and behold, it was a hot link and here I am. Anything Irish jumps out at me - guess it's my Irish roots - my great grandmother came to America from Dublin. Your pics. are wonderful - reminds me of my own home in Michigan.

I want to thank you for sharing your story of the carding chickadee. Nature is so amazing and it is so wonderful to find people who appreciate nature.

Now I will go back to your blog to catch up on what I have been missing.

I love your blog & just discovered it. I'm in love with anything Irish & your yarn is scrumptious! I can't wait to read more. Hopefully there's a picture coming soon with the birds/wool.:)