The Long Dark Night Of The Garter-Stitch Sole

No you haven't heard from me in a while. Well what did you expect? Sock Madness is a pretty demanding taskmaster, you know. And for this second round we were all thrown into discombobulated confusion by an April Fool's joke played wittily on us by the moderators - they released the pattern a day early! There we all were, getting work out of the way, winding up yarns, peacefully discussing possibilities, when WHAM - the pattern dropped into our mailboxes.

Ah then was mounting in hot haste - the steed
The mustering squadron and the clattering car
Went pouring forward with impetuous speed
And swiftly forming in the ranks of war!

Not a peep was heard out of anyone for hours.

It was a demanding pattern this time round - entitled Reversai, it was a particularly lovely and intricate Guernsey pattern from Janine le Cras, but with the added demands (for Celtic Memory at any rate) of a pretty high stitch count and a lot of garter stitch on heel, sole and toe. Working garter stitch in the round is a bit like walking across a ploughed field - you should be getting along quickly but instead you're trudging slower and slower and eventually stop in vexation to wonder what's taking you so long. These socks took FOREVER. 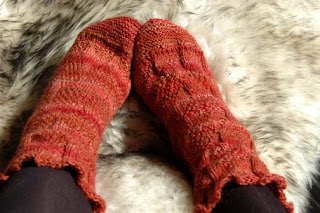 As you can see, they're a bit generously sized on me, but that will be sorted. Lovely pattern, isn't it? The reason for the title is that they are totally reversible, with the same patterning on both sides. Clever!

Took three days instead of two, but the relief of finishing was huge. How did Celtic Memory celebrate? How do you think? By immediately casting on for The Yarnarian's Falling Rain socks. You may recall I made her Leafy Greens in between the first and second round, to stop fidgeting hands, and this time didn't even hesitate, but went for the lovely new pattern. 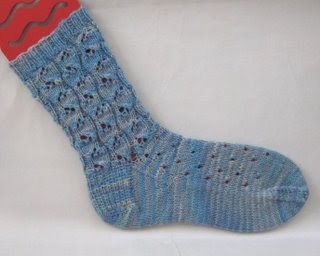 (That's Yarnarian's pic, not mine, by the way. Thought she wouldn't mind my sharing its beauty with you.) Don't you love the way the raindrops trickle down the leg and end in tiny droplets on the foot?

And spring has sprung in West Cork! We've had three whole days of soft fine weather with a breeze blowing and that certain something in the air which makes you forget all deadlines and head for the garden with rake and shears. We're scheduled for a return to icy northern winds tonight or thereabouts, but right now it's spring and we are giving due thanks for it.

Very VERY good news! Remember that little cock wren who built a tiny home in a creeper outside the kitchen window, and then went out socialising to see if he could pick up a mate? Well he DID! The other morning we glanced out to see how the little bunches of combed dog fur were doing in the bushes by the pond (we always put them there at this time of year, as nesting material) and what did we see? 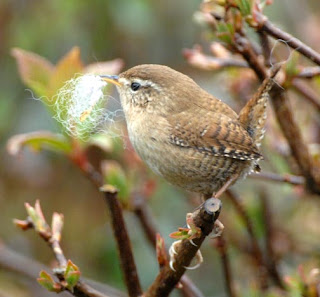 The little lady had inspected the mossy cottage, pronounced it just right, and immediately sallied forth to choose bedlinen and curtains.

She wasn't the only one rushing around the drapery department that morning. 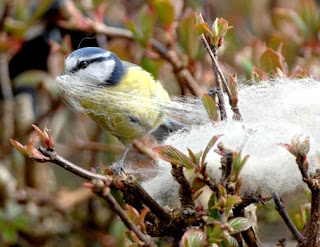 This bluetit was yanking out great beaksful of fur and flying off with them like a mobile Father Christmas to an as yet secret destination. We usually find where most of the nests are once they start feeding young, but at this stage we don't like disturbing them too much in case it puts them off the location ('gosh, nosy neighbours, let's go somewhere else, shall we?') There is an early robin sitting on eggs in a pampas bush in the orchard, and a blackbird with more enthusiasm than sense in a dangerously open spot in the hedge, but that's all we've seen so far.

I am so happy Jenny Wren liked the nest. Now we can boast the By Royal Appointment logo, since the wren is the king of all birds. Pictures of eager young being fed in due course if all goes well (the nest is ideally placed for snapping from the car window). As always, loving thanks to DH for taking these shots - he possesses both more knowhow and more patience than ever I will.

Our neighbouring organic farmer clearly scented the spring too. He was up bright and early this morning, ploughing the field behind our house. 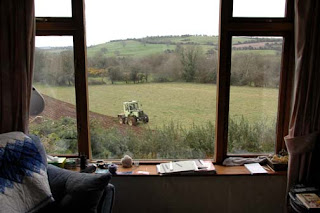 We're very lucky to have Patrick next door. Farmers who use chemical pesticides are no fun as neighbours.

Now that Round 2 of Sock Madness is out of the way for Celtic Memory at any rate (it's still progressing, though, and will be for a few days yet), it's about time some more hand-dyed yarns got listed on eBay. Simply didn't have the chance with the frantic knitting. 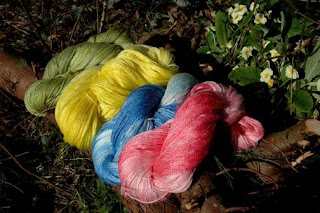 Couldn't do other than go for spring themes this time round: from left to right here, Irish Moss, Daffodil, Bluebell and Wild Rose. Going to list them as soon as I've posted this. For those who enquired, no, I don't have an eBay shop - that demands constant attention and presence, neither of which I can spare - but I will always tell you here when I'm going to list them. I'll come back and put in an ID number for one of them later maybe, since somebody said she couldn't find them, but in the meantime, if you go to the Handpainted Yarns category and put Celtic Memory into the search box, they'll pop up quickly enough.

Off to enjoy spring in West Cork!

OK, the yarns are up on eBay now. This is the item ID for Irish Moss:

and you should be able to track the others from there. All nice subtle semi-solids this time, nothing too ferociously contrasting. Ideal for complex patterning (like Reversia!)
Posted by Jo at Celtic Memory Yarns at 2:15 pm

Oh, I love your back window view. I grew up in hills, and don't have them here. I can drive about an hour and a half North toward Natchez, MS and get my fix. It's just that my Siamese cats expect me to come home again, and stop lallygagging about in the scenery! VBG!

I wish I had that view

Sweet... the yarns and the lovely primroses!
The guernsey socks really are lovely and yes, quite roomy for you :^)

Oh those colors are gorgeous. And I love your latest sock madness socks, beautiful.

So happy that Jenny Wren accepted her suitor. It means lovely baby bird photos to come.

Thrilled that you made it into the next SM2 round with such ease.

HPNY KNITS said...
This comment has been removed by the author.
8:41 pm

sock immersion! fantastic. and the birds steal the show. adorable.

What does Patrick plant in that great view of yours?

I would always brush my yellow lab outside so that the birds could use her fur for nesting. After she died, I found a perfect little nest complete with her fur - what a treasure! Enjoy the view!

I just love your little birdies. So far we have a robin or two, and maybe a bluejay.

The chipmunks are still hibernating, and the deer are eating someone else's lawn. And the useless groundhog that we thought had moved somewhere else, is also still hibernating. I have no idea where the resident fox is.

I'm so glad you survived SM2! YOu're a better woman than I, Gunga Jo!

interesting. i dont think my cuff is rufflely like yours.
this is the most tedious sock for me!

how do the ridges feel on your feet?

Another sock round down, brilliant yarns in the shop, cunning birds building cozy nests with fine dog hair, and the farmer turning rich smelling soil in the next field.

All seems well with your world.

I always love to read your stories and watch your great pictures. This time wanted to ask you if you know that in German the wren is called “fence-king”? I love these little birds with the loud voice and hope for once having some in our future garden.

You inspired me to set out my dog's hair. It disappeared each day rather quickly but I haven't seen the results yet.