It's Maytime, and Summer Is Icumen In!

Yes, at last May is here, and the start of the Celtic summer.  Way back, we only had two seasons in this corner of the world, winter starting on November 1, and summer beginning May 1. Of course Pope Gregory threw things out a bit when he arbitrarily decided to lop ten days from the calendar, in the 16th century, thereby putting Mayday back around the 20th of April.  But then whoever decided back in Roman times that there should be 365 days in the year plus an extra one every four years - oh forget it.  Main thing is, if your may blossom or hawthorn isn't out on the current accepted May 1, then don't worry.  It will be out by old Mayday which is tomorrow.  And by the same token, if by any chance you forgot to wash your face in the dew on Mayday, then you can still do it before tomorrow night.  Very important to observe that ritual.  Celticmemory has done it since she was old enough to toddle out by herself.

And to show you just how long Celts have been celebrating May or Bealtaine, here is a special picture. 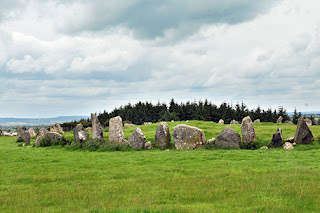 This is Beltany stone circle, up in Donegal.  You can't get more proof of the ancient rituals of summer than a special stone circle where druids kindled the first fire of summer, using the nine sacred woods. Just imagine if those stones could talk?  What have they seen, what could they tell us?

Everything is bursting into bloom here right now, and about time too.  We had a cold spring and everything was late, but the good side of that was that they all came out together. 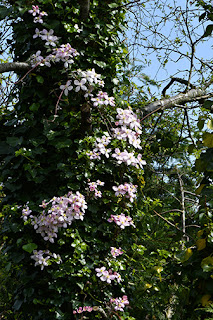 The clematis that I thought had died hadn't done so at all.  And to show its health, it clambered way up from the trellis, right into the branches of a birch tree.  It was simply lovely to see the veil of pink swaying gently in the breeze.

The apple trees have been blooming too, from the tiny crabapple through the old Irish species like Ardcairn Russet and Kerry Pippin, to the splendid old cooking apple that was espaliered against a back wall of the garage by Richard's father a long time ago. 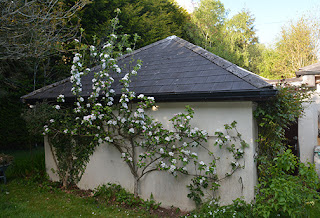 We have tended to let it grow as it wants to these days, rather than tying it firmly down and lopping off extra growth, but it still produces baskets of fruit each autumn.

There is something else there too, underneath that apple tree, something very precious. 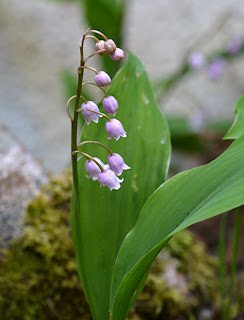 Lily of valley, or muguet de bois, must have the most heavenly scent going.  I have no luck with this aristocrat - have got roots, tried to raise them, many times, but they simply refuse to cooperate.  So how are we fortunate enough to have a little bed of them here in this dry patch under the apple tree? They were brought there from France by Richard's mother a long time ago, and they have stayed ever since.  When I see the first spear-like leaves appearing, I know it's time to go out and tackle the bramble stems and twitch grass to give them a good chance.  Lovely little things.

The zoo is adapting fairly well to this quiet isolating life, although Troushka still yearns for a gallop on a long deserted beach.  Not just yet, Troush, not just yet.  The cats are putting all their energy into attacking each other - sort of cabin fever, one would imagine, although they do have the extensive fields behind the house. 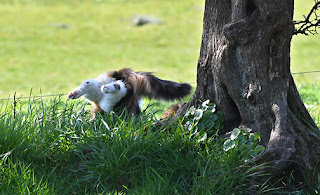 Isn't this a perfectly lovely picture of Marigold practising her high diving skills?  Actually she is pursuing Paudge Mogeely, who had been peacefully enjoying a rabbit dinner until she came along and ruined the picnic.  I must say she really shows her fluffy Turkish bloomers to best advantage in this shot.  Good one, DH!

And Brogeen is so much at home that you would imagine he had always been here. 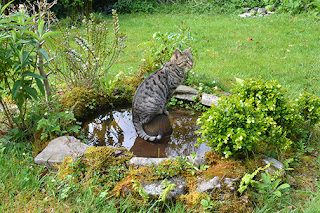 Here he is dreaming on the small pond in the rose garden.  It's an old pig feeding trough with a central knob or boss, just big enough for a kitten to sit atop, albeit with his tail trailing in the water. After a happy day exploring though, he is content to come home and take a nap. Especially if he can find a nice soft ball of wool to use as a pillow. 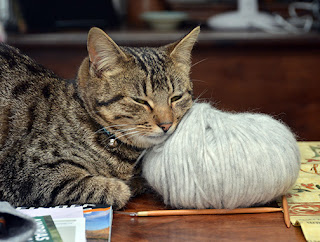 Well of course there has been knitting!  When have you ever known me not to be knitting?  That gansey got finished at last: 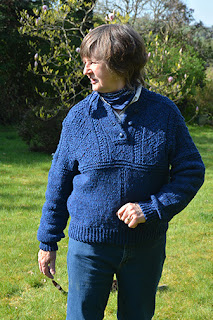 and there was a huge frogging session when WIPs that had been hanging round for months if not years were determinedly ripped, the yarn balled up, the needles returned to their racks.  Couldn't believe how many circular needles I actually possessed!  Of course that meant I was now free to cast on another project - or two - or three... Working on a sort of smock tunic that I will call Viking Traveller, because it's just the kind of thing a warrior might wear under his chainmail to keep comfortable, and thinking of starting yet another Aran sweater.  That is one good thing about the lockdown - you do get time to knit and even finish a couple of projects.

But we get out too, if not very far from home.  Fortunately the Gearagh is very close, and at this time of year it is looking stunning.  Early the other morning, when we went down to admire the hawthorn in full scented bloom, 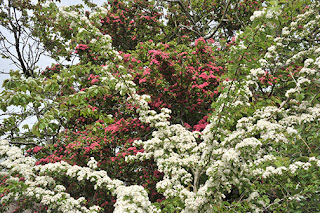 we suddenly glimpsed a heron, beautifully reflected in the still water. 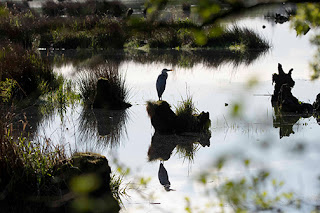 We tiptoed past, so as not to disturb his quiet morning meditation.

Further on, we saw a mallard with her ducklings, all in a row. 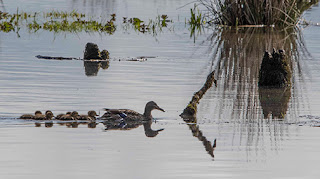 When Mother Duck saw us, she got a bit worried and hastened off into shelter, with all the little ones frantically trying to keep up. 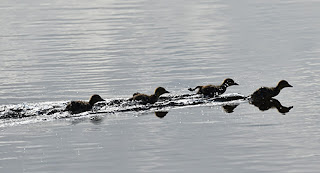 Can you see that second one almost running on top of the water? 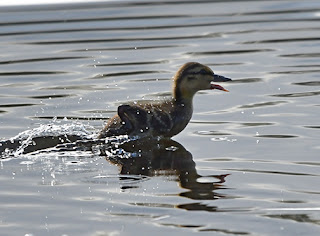 Here he is, determined not to be left behind.  We waited to make sure the full complement had got into shelter before we turned for home.  The last look is always for Shehy, the fairy mountain, which is sometimes pointed and sometimes appearing flat topped.  That's when the Good People put up a mist so humans can't see them preparing for a hosting or a journey to another fairy fort. 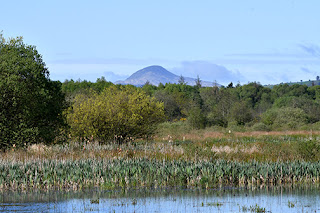 Can see the top quite clearly there, so obviously Themseleves are at home, feasting and singing and playing harp music.

Gosh, forgot to tell you about the new book, and the fun we had researching it.  Brehon laws might sound boring but they were fascinating to find out about.  Wasn't all that easy - sources tend to be very academic and hard going - but underneath all the strict and severe words, a magical world lies hidden for those with eyes to see.

Gradually we got a picture of a bright ancient time where women had as many rights as men, if not more so, great care was taken of bees and birds, animals and trees, where offenders weren't imprisoned but put to work for the good of the community, and the starving, the mentally afflicted, the wanderers, were looked after.  What I found best of all was the detail on women's crafts like spinning, dyeing, weaving.  An embroideress's needle was worth more than a queen's jewels, because she could earn so much with it.  If your hens got into my garden and scratched up the woad plants I was going to use to dye my wool a lovely bright blue, then you had to pay me at least two full spindles of spun yarn, and furthermore put boots of rags on the hens in case they ever got out again!   And woe betide the person who stole a lady's pet dog.   Not only did he have to replace the pet, but was hit with a very heavy fine too.

Cats weren't forgotten either.  A moggie that could purr and also catch mice was worth more than one which only purred, and although if your cat stole some food from my house, you were liable for a fine, if it could be proved that I had carelessly left the lid off a jar or a door open, then no blame attached to you or your cat!  See what I mean about research revealing a magical world?  How practical and humane they were.  Wish we still had those laws.

Thought the lockdown would put paid to anyone even seeing the new book, but in fact it's going great guns in online orders, which is very nice.  In fact anyone ordering any books anywhere, whether for themselves or for loved ones, is doing a good thing.  I know I'm doing much more reading lately.  Oh, don't forget - if you are ordering Brehon Laws from O'Brien Press and want a personally inscribed copy, do tell them on the order, and for safety email me as well.  Wouldn't want you not to get it if you had asked for it.

I hope you are all making good use of this quiet time we are all sharing.  At times I wonder if it will be all that welcome to return to hurry and bustle, the noise of traffic, crowds everywhere?  It's so peaceful now.  Let's make the most of the quietness.
Posted by Jo at Celtic Memory Yarns at 6:01 pm

I've ordered the book, it will be fascinating.

Trying to live as much as possible - hugely appreciating being at home and on furlough at work but dreading everything going back to normal. Assuming I have a job to go back to.

thank you for your photos and writing.

Lovely to hear from you again, Jo, and to see those pictures. Can we hope for a post a month, perhaps? We'd all be so glad!
-- Gretchen (aka stashdragon)

Great photos as always, lovely scenery, and great cat action shot! I'm glad that you're all doing all right.

Two posts in two months! Oh, you made my day! Thank you! :) Stay safe, and watch those moggies don't start a "steal all the yarn" campaign. I know my wee Freyja kitty has tried!

And the book sounds fascinating!!

Oh, Jo, this all looks wonderful and I am so very happy about the book! I have been out of touch and have tried to reach you...so many things going on. Please email me at dezcrawford at gmail dot com, just a quick note, as I have something I want to send to you. I hope you are able to post steadily again. It's wonderful to see you online.

Beautiful pictures and writing, as always. I love your gansey sweater!

The ancient Celts had their seasons in the right time periods. I often think how messed up it is that "summer" doesn't officially begin until June 20th, while winter logically begins with November. And Brehon Laws! We certainly could use those common sense ways of maintaining order in such just and reasonable manners.
I clicked on the Book link but only came to a Page Error notice.