I was having the divil's own luck with that Druid's Stocking I mentioned last time.  The infinitesimally tiny needles and the fine yarn, though undeniably a beautiful green, made for a dreadfully harsh fabric, not to mention the havoc they were playing with my fingers and thumb joints.  Eventually I got sense and went up a few sizes in needle and called upon the aid of a lovely warm soft pale grey yarn that I'd used before.  Instant happiness! 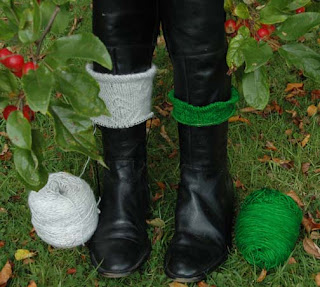 Here are the new and the old, which I fitted round a pair of boots by the crabapple tree.  You probably can't see the lovely patterning on the pale grey but it's there, believe me.  This is just the cuff so far, and then that gets turned down and you start on the leg of the stocking.  Which has its own delightfully complex cabling.  Meggie really is a brilliant knit designer.

And, the birthday of a very small young friend coming up soon, I whipped up this little bag last night. 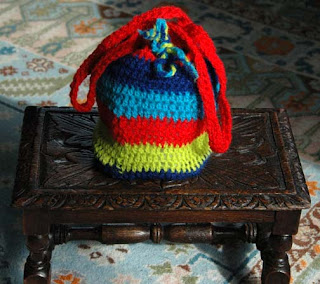 It's the Toy Tote Bag by Sherry Etheridge and is just big enough to take some tiny gifts and sweets.  Then it can be used later on for special treasures and slung over a small shoulder.  A really speedy crochet project for suddenly-needed gifts - you could put anything inside it from pretty soaps and flannels to indulgent chocolate treats.

We decided the other day that it really was high time to go and get good pictures of a particular stone circle down at Kealkil on the back road to Bantry.  Getting there wasn't too much of a problem (as long as you can cope with climbing steep sinuous boreens about the width of a loaf of bread and never knowing if you'll meet a tractor or hay wagon coming the other way at full speed, and, having lived here a fairly long time, we can) but actually reaching the monument itself posed more of a challenge.  There was a stiff iron gate standing stern amid a positive sea of mud and manure.  As if that were not enough, somebody had spilled black sticky oil all around the opening side.  Which meant the dog had to be carried, as I wasn't prepared to deal with black sticky oily paws for the rest of the day and night.  We crossed one field, and then had to tackle the next obstacle - a steep ladder, again emerging from the depths of a quagmire, up to a bramble-bedecked bank, and another ladder down the other side.  Dog had to be lifted again.  This was Petroushka, by the way, who, though still a puppy, weighs twice as much as the other two and then some.

And then, having gained the final stretch,  the entire field itself turned out to be a bog, with quaking tussocks of grass standing up in deep pools of inky water.  How you can get a bogland on top of a hill, where you would think every drop would have drained off, beats me, but there is one here, take my word for it.   Crossing it was no fun at all.  You would probably have come down to solid rock after you'd sunk to your ankles, but it still wasn't the kind of afternoon stroll you would have chosen. 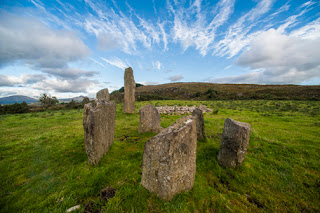 Eventually, though, we got to the stone circle and it was worth it.  The circle itself is small, but there are two superb tall standing stones outside it, as well as a ruined cairn. 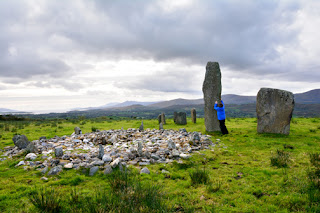 You can get an idea of the height of the tallest stone in this picture - I'm about 5'7" so I would say it was twice that.  Bantry Bay is in the background, and the Kerry mountains beyond that.

Most of our clothes required special cleaning when we got home (to say nothing of Petroushka) but it was worth it.  Beautiful monument.  If only one hadn't got the distinct feeling that somebody didn't want us there and had taken steps to discourage visitors.

Now it's the season of mists and mellow fruitfulness as you all know (unless of course you live in the southern hemisphere, in which case you're starting to enjoy spring) and here that means apples.  Our own crabapples (seen above with the Druids Stockings) aren't ready to pick yet, but we knew of a wonderful orchard on the east side of Cork and made our way there when we judged the time to be right. 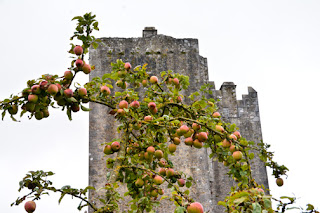 This is 16thc Barryscourt Castle where Heritage Ireland is doing a tremendous job of restoring not only the structure but the surrounding gardens too.  To this end, they planted an orchard with as many of the old Irish apple trees as they could find. Isn't that a lovely thing to do? 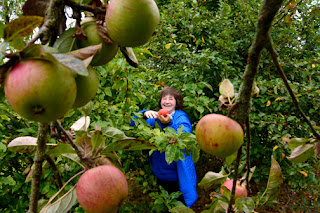 How could you resist apples with beautiful names like Offaly Lady's Fingers or Irish Peach?  Kerry Pippin or Crofton Scarlet? 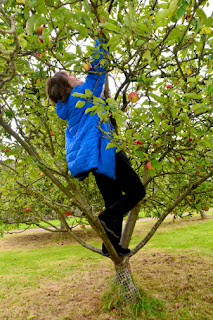 I just had to get a closer look at this Ardcairn Russet...

And they very very kindly let us take away some of the windfalls.  I have evolved a great method of making apple butter, using the slow-cooker (crockpot to you New Worlders), and have already got the first couple of pots filled and labelled. 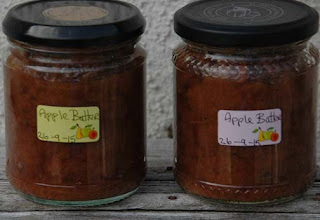 May your own autumn be full of fine foraging and happy preparations for filling the pantry shelves before winter.
Posted by Jo at Celtic Memory Yarns at 6:51 pm

Well, I think you ought to tell us the method of using the slow cooker to make apple butter!

Freya I should be delighted but be aware that this is the way I evolved. You might prefer another method.

Find a slow cooker that will fit all the windfalls you've scored. Pile the lot in. Yes, skins, stems, the lot. Add a tiny bit (eggcup full?) of water or maybe a splash of cider. Set to Low and leave it alone for the rest of the day. (You might look in now and again after a few hours and cut a knife through the apples which should be softening nicely by this time.)

When everything is really mushed down (might be midnight, might be next morning) spoon the lot through a sieve into a large bowl. A large-mesh sieve is best as the fine kind would take you till Tibb's Eve. I find those flat mesh things for putting pizza or chips on in the oven ideal.

Empty the puree back into the slow cooker (the skins, cores, pips, can go in the compost bin. What, you don't have a compost bin? Well get one!)

Now add brown sugar, cloves, cinnamon, ginger, whatever turns you on. Taste the puree before adding the sugar so you know just how sweet it is already. Eating apples are a lot sweeter than cookers or indeed crabapples. How much spices? That's entirely up to you. They're what will keep the puree when it's stored in glass jars.

TIP: I tend to group the jars that I'm going to use around the slow cooker or even on the lid, so they're nice and dry and hot when you need them. Others might prefer to do the whole purifying thing. Whatever.

Give the puree another few hours, stirring it now and again. Then take off the lid and let it cook for another couple of hours (again stirring occasionally) until the liquid has mostly disappeared and it's turning into a rich brown paste.

Bottle it up, label the jars, and feel smug.

Great with meat, also delectable on fresh bread. And to give as a gift.

I am glad Freyalyn asked because I was about to! Egg cups aren't as common here (US) so I shall have eyeball one and make a "this seems about right" guess. I can't wait to try it. :)

The bigger sized, grey socks will be gorgeous. Bravo on bravely forging black oil, quagmires, ladders, brambles and bogs to get to the ancient stone circle. The adventures you have!

Mmmm, your method for making apple butter sounds delicious, and much more efficient than the oven method.

Ed was intrigued by the numerous crabapple trees dotting the parks, lawns and roadways in Boise, ID when we were there a week ago. Sadly there were no downed branches laying around for us to bring home. Last year we packed home a branch of mountain mahogany that had incredibly beautiful wood inside.

As always, reading your blog is a deep pleasure!