An Ancient Citadel on May Day

You know, with all this rush of summertime and gardening, and birds nesting, and foxcubs coming out to play, and all the fun groups on Ravelry like Summer of Socks , I completely forgot to tell you about going up to the Cathair on the first day of May (after washing my face in the dew, of course). Omission hereby rectified. With pictures.

The Cathair is a very ancient site of worship indeed, situated in the hills on the Cork/Kerry border, with spectacular views all around (like old Weathertop, for those of you who are Lord of the Rings fans), but particularly sited so as to see clearly the Paps of Danu, two smoothly rounded mountains dedicated to the old Irish goddess of that name. In more recent times, predictably, Christianity took over the site and its magical spring of clear water became an official holy well, but the tradition of going up there to celebrate the coming of summer, and taking water from the spring is recorded in the earliest texts. In ancient times, they would light bonfires and drive their cattle through the smoke, later taking water from the spring to anoint stables, byres and other places that their animals abode, to keep out evil spirits that might bring disease. Then there would be feasting and merrymaking throughout the night. 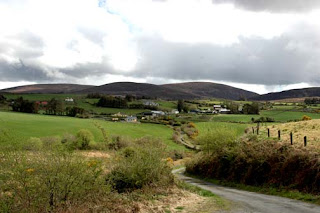 Rather reassuringly, there is no direct route there. You drive down across the Cork/Kerry border to Glenflesk, and then turn off into side lanes, following the route of the old railway which once ran to Kenmare (and they do say you can still hear the whistle of that selfsame train on moonless October nights, following the old tracks which no longer exist, down through Loo Bridge to Kenmare). Then you reach another road, turn again, and finally find yourself on this nice narrow winding lane, heading deep into the hills.

I went up there with my photographer friend Valerie. She's a Kerry girl and well used to hopping out and guiding cars past each other on the lane. Here she is advising on the hard ground and the more dodgy soft ground on the verge. All rather peaceful and relaxed, and well removed from the usual traffic jams and gridlock of motorways or city traffic.

It's a strange place, the Cathair (the name means simply 'City' or 'gathering place'), if you're used to organised historic sites with tidy surroundings and notice boards. 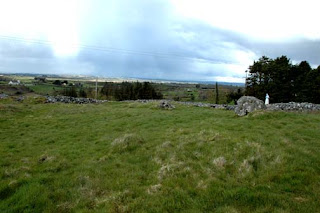 At the top of the lane, you find this old grey stone wall surrounding an open grassy area with only the uneven bumps suggesting that an archaeological team could have a whale of a time here. You can see a statue of the Virgin Mary carefully placed on the wall to the right over there, to remind worshippers of the established religion rather than the unapproved, far older one, and just in front of it, a large grey rock. 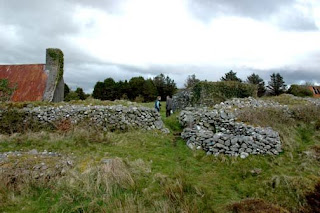 Over the centuries, in times of population pressure, people have even built houses right up against the stone ramparts. These houses are now fallen into ruin, but somehow they add to the atmosphere of this high windy place. 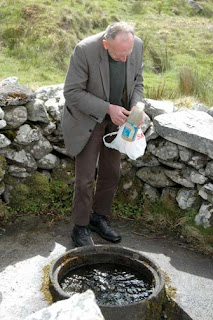 It was late afternoon when we arrived, but there were still people here, making their way to the spring with their bottles. Every country Irish household has its bottle of holy water from one well or another, so I assumed that was what they were collecting here too. In fact, as you will see later on, that wasn't quite the case. 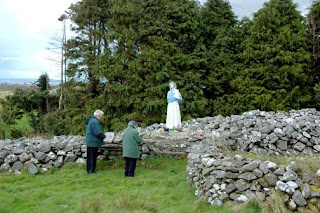 Others were praying quietly. 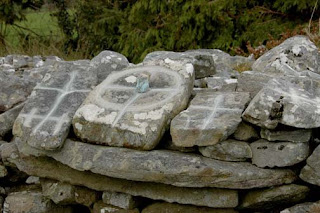 Look at these stones, piled by the statue. Some are fairly new, others are very old indeed. You wonder when those crosses were first incised, and if there is another symbol underneath, deliberately blurred by the strong lines of the cross.

It's when you stand right by those carved stones, and turn your back to them, facing east, that you realise the full significance of the siting of the Cathair and its huge central stone. 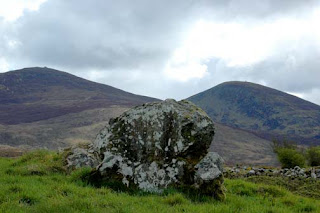 The Paps of Danu, due east from the great grey rock. Can you imagine that at sunrise on May Day? I really must go up there again and get a picture for you at dawn. Established modern religions somehow fade into the background when you're faced with something as ancient and powerful as this.

It was quite difficult to leave that place, but evening was drawing on; a blackbird was singing sweetly, its voice echoing and re-echoing across from rampart to rampart, but the midges were out in force as well which is always a sign to get on the road home. 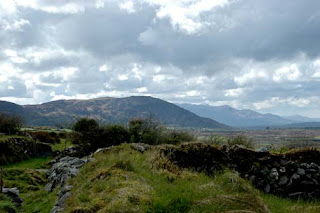 One last look out over the sweeping view from the Cathair, and we said goodbye to the ancient stones and the place of worship.

A last lovely touch: after Valerie and I went our separate ways, she back into Kerry, me headed for Cork, I stopped off at my favourite cafe, the Cruiscin Lan in Ballyvourney, for a restorative coffee. Of course I told them I'd been up to the Cathair and talked about the nice people I'd met there, getting their supply of holy water from the spring.
'Oh but that's not for themselves,' said the waitress immediately. 'That's for their cattle. It always has been. You get the water up at the Cathair on May Dayto bring health to the cattle . That's the way of it.'
It was a very good feeling indeed to have confirmed, by a waitress in a cafe on the busy Cork-Killarney road, that the old ways and the old beliefs are as strong as ever they were.
Been dyeing up yarns again: this time, perhaps inspired by thoughts of Weathertop and Lord of the Rings up there on the Cathair (and also by a divine new sock pattern, Rivendell, from the just-published collection The Eclectic Sole), I created them in Tolkien mode this time: The Rivendell Yarns. 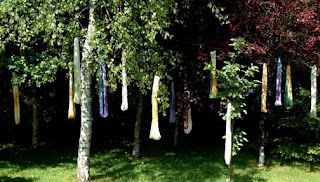 Here they are, drying under the trees. Yes, the blackbirds and the mistle thrushes have fledged and left the nest, and here's a picture of a young mistle thrush on his very first flight to prove it - 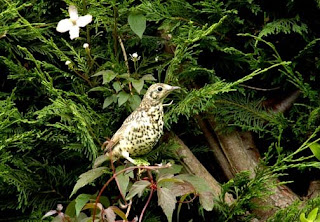 Moments before I took this picture he had finally launched himself from the edge of the nest and flapped wildly across the garden to the safety of a tree. Big moment in his young life.

However, as I was saying, those two families had gone, but in the meantime, a bullfinch had taken up residence in the hedge, and now has six tiny babies. OK, hold the washing line for another two weeks!

Actually I'm getting rather fond of colourful skeins swinging in the breeze up and down the driveway. It has a good feeling. 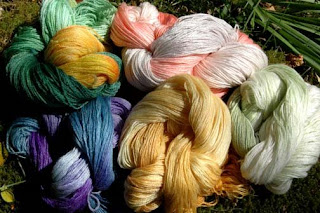 Here are the Rivendell yarns close up: from bottom left, working clockwise: Arwen Evenstar, Tom Bombadil, Dawn in Elfland, Rivendell, and Lothlorien. Quite surprisingly, the ones I listed as Buy It Now on eBay sold instantly; the bidding ones are listed until tomorrow I think. Then I must get going on dyeing up some new sock yarn blends which have just arrived: a gorgeously soft alpaca/silk, and a merino/bamboo. Lots of fun ahead!
Posted by Jo at Celtic Memory Yarns at 9:26 am

Thank you for the great story of the old ways. Not many recognize them and few tell the stories.

I so enjoy reading your blog! You have wonderful stories, nice photos and it is put together well! Thanks for sharing!

One day I will get to Ireland with my bike and explore the lands you write about.

As a pagan far from the old places and old ways, I very much enjoy your stories and posts. The new yarns are gorgeous as always and thanks for the heads up on the book!

I enjoyed your tour of Cathair. The old stone walls are really amazing. The country side is so lovely and green. At first glance I thought your yarn in the tree was some wondrous trumpet shaped flowers.

What a great story and beautiful countryside...

Thank you for your post. I love all the pictures. My mother died last week and when we were going thru her things we were comforted by finding some holy water inside a Jameson bottle. The only way to carry holy water from Ireland to America.

Such beautiful pictures... thanks for sharing!

I can't wait to visit and see these places for myself. My family has castle ruins in Wexford and the thought of being able to touch the stones sends shivers down my spine.

Hi Jo, Thank you so much for such wonderful sharing. I absolutely love the story you gave us about the ancient ways and wisdom. I also love that you always add some nature into your blog. I am an American living in the Sonoran Desert of AZ. However, my ancestors on my father's side came to Michigan (I was born and raised in MI) via Canada from Ireland. Perhaps that is one reason I am so drawn to your blog, to Ireland, and to the tales of ancient beliefs. Your yarns are gorgeous - I'll have to check them out on Ebay.

Love your posts. The yarns are gorgeous. I'm very fond of the yarn in the trees pictures.

Wow! Such a great and energetic place!!!

Captivated by the colorful, changing sky scenes. At this time of the year the lighting, clouds, and multi-hued blues and greys of the sky draw my eyes sweeping upward.

Thanks for taking me to Cathair. I can feel the wind on my face!

What a lovely, bright day too. I think those "old ones" must be happy with you.

Jo, you are a true bard. What a marvelous tour of Cathair. Thank you. And I love your yarn.

I have to add that I've been in bed today with a nasty little sinus bug, but I curled up with "The Dark Is Rising." Some time ago you spoke of it, which caused me to dust off my old copies and place them in the "read again" pile. Today seemed the perfect day.

I just discovered your blog, by way of Ravelry. Your pictures are beautiful. I think Ireland is one of the most beautiful countries. I haven't seen any of the north, but the west, and especially the south are so amazing. I can't wait to go back again and again. I'll be back to your blog again definitely.

What a lovely post! Thank you for sharing with all of us. And I loved the picture of the fiber hanging from the trees!