Miss Sophy Thanks You All

She's back home, thank heaven, rather groggy, and preferring to lie quietly on her favourite rocking chair rather than racket around, but that's what she should be doing after such trauma. 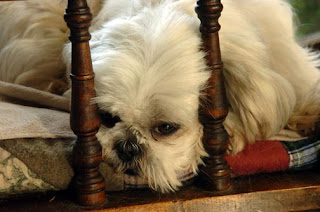 Even the sound of plates being rattled doesn't interest her at the moment. All she wants is to be close to both of us. We've pulled the rocking chair close to the table and are taking turns at sitting where she can feel us next to her. DH is doing Sophy-shift at the moment, working on his laptop downstairs while I'm up here.


Isn't it awful when a pet has to be taken to the vet and be left behind there, and you go away, seeing those stricken eyes following you, feeling like a betrayer, almost a murderer? I got so worked up that I started imagining the worst scenario and how I would feel knowing I was the one who had deliberately chosen to bring her in? I tell you, I got a lot of pattern repeats done on Pomatomus today, not to mention the mini-gansey. Grimly concentrating.


I know, I know, I was not being entirely rational. Every time a pet has had to have this operation before, it was an emergency, and often touch-and-go as to whether they survived. This time I'm making sure that doesn't happen, right? Being sensible. But it was still a worrying day. 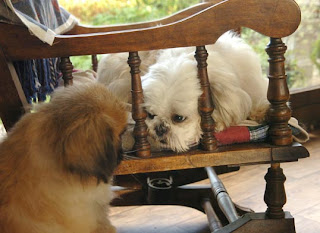 The other two girls were most concerned, searching for Sophy around the house all day, and rushing to greet her when she finally returned. However, once they'd sniffed her quickly, they realised she wanted to be left alone, and immediately went off into the garden, giving her some peace, which was nice of them. They're still giving her space.


Sophy thanks you all very much indeed for the good wishes. She says that when she was most frightened, she just thought of everyone's comments and they helped a lot. And a special message to Patches in Nevada: she'll show you her scar when it's all better.

I've said it before, but I'll say it again. You're a great gang.
Posted by Jo at Celtic Memory Yarns at 11:12 pm

Glad to hear you are both doing well.

Poor Sophy… and poor you. It's always a trauma to have our little ones go under the knife, no matter how routine the operation is. Every time my boys go under general anaesthesia I am a nervous wreck.
So glad that Sophy is doing all right. :)

Aww... She'll feel better soon. And then you'll have one less thing to worry you for the rest of her life.

Jo, I totally understand. When I had to take my Gracie in, I angsted all day long. I knew it was the right thing...knew she was in good hands....and yet.....yet, I was scared silly until I could snuggle her close again. She repays me this by steadfastly ignoring me most of the time, and by often responding to being petted by vigorously washing the spot...but I'm pretty sure she appreciates it! Hugs to you and to Sophy...and I'm touched and pleased that you enjoyed my hot summer night post. I can't believe you're sending me something, when all your lovely posts and comments are such wonderful gifts already..but I'll be watching for it.

The little eyes looking through the arms of the chair say it all! I know how you feel, Sophy, I just had some wisdom teeth removed under an anaesthetic - milk it for all you can, Sophy!! Lots of treats! Okay!
Aren't animals amazing at how they know when it is time to be close and time to back off and let the other rest?

Very glad to hear she's doing alright and yes, she'll be up and running before you know it.

oh my gosh what a little face...all pushed up between the brackets of the chair...those pictures are priceless...

and don't you worry about how you felt, behaved or reacted...i don't find it silly at all...not one little bit silly...

when my little Duster died i didn't leave my house for weeks...yes weeks!

lovey pets for sophy and snuggles for her two pals...

Yippe Sophie is home!! Now you make sure your Mom knows she owes you lots of little treats while you recover.

And how cute that your sisters missed you and checked up on you when you got home. And were smart enough to let you rest.

Also Mom and Dad deserve a little treat too for getting thru this too you know :D

Of course the others are ignoring her --she smells like the vet's!

Glad she is doing so well. Keep up the great care!

I'm so glad to hear that Sophy is recovering nicely. And that you're recovering, too! I'm always beside myself when I have to leave a pet at the vet's office for anything--no matter how routine. I don't even like it when they get taken "in the back" without me. I got myself so worked up with "what ifs" that I even broke down in tears of relief when I picked my dog up after a "minor procedure" a few years ago. (And I showed up about an hour early. I'm never even on time, let alone early...) The vet thinks I'm nuts. I don't care.

Hi, Jo.
Glad the little gal is feeling better. Stress thou not.

I've just placed a bid on your Sea Cave e-bay yarn! -- never done that before. Will this be fun? Hope so! {wink} We'll see how it goes, shall we?

Have a great blogiversary week!

Oh, I'm so glad to hear Sophy is home safe and sound... and that you are all taking such good care. :0)

Good to hear that Sophy is doing so well. I do feel for you though as my day has been associated with the vet, too. My dear old cat, only 18 years young, has spent the last few days on a drip trying to get his systems working, but unfortunately he passed away this afternoon. Thank goodness I was at the vets to visit him and held him for a long last time. He was a delightful little fellow who loved nothing more than sitting on the tray of my son's chair and having a cuddle.

So I actually missed your anniversary but assure you that I'll still be a constant visitor and am so glad I found you (is it only) 12 months ago.

so pleased she is home and doing ok. I know you both will be glad to have madam back.

That second picture is just too dear -- it's amazing how the other animals know. Gentle hugs to Sophy!

That is possibly the sweetest little face I ever saw, looking thoroughly miserable there.

Lyn, I am sorry about your cat.

We do tend to get emotional about our furry children- but you did the right thing for her.

Awww, the pictures... Yes, I'm with the rest - your pets need a doctor, it's perfectly natural to worry like crazy. At least the worst is over, and you can make it up to her by some spoiling! Quick recovery, Madame Sophy!

And Lyn, my sympathies on losing your cat, too. Glad you could be with him.

I'm so glad Sophy is doing well. My Mom and Dad's little Zoe had the same a month ago. She flops over so everyone can rub her scar now. Sophy will be back to her old self very soon!

Lots of pats and strokes for Sophy!
Our younger dog had to have a major operation when she was only 14 weeks old, and not at our local vet but at a specialist clinic miles away. Thankfully all went well, but it was an anxious time. Even the smallest and most routine procedure is a test for dog and owner.
Good wishes to you all!

I'm glad both Sophy and "mom" are doing better.

She'll be up and running around before you know it =)

Your pictures say it all.

Glad to hear she's okay. It's just heartbreaking to see them go through this, but in the end you made the right decision.

I'm so glad Sophy is at home and doing well! Those are adorable pictures of her :)

I'm glad that Sophie is back and o.k. I completely understand the worry about having a pet at the vets! Yesterday my little Rascal had to have his teeth cleaned! Until I got him back at home I kept worrying - even the vet calling and telling me everything went well...

It's always so hard to leave a pet behind for an operation. You can't explain to them what has to be done, and you feel so guilty and worried that something might go wrong. Luckily she is doing well now !!! Lots of TLC, that's what she needs and it looks like she is getting lots of those :-)

Glad your girl is on the mend. I am sure she will bounce back. I am sure that taking a pet to the vet is worse than taking your child to the doctors! At least the child, once they get beyond a year or so, can tell you what hurts & you know if they have understood your soothing words/ bribes!!!

I'm glad that little Sophie is home and feeling better!

Happy Anniversary!!!!! You have a delightful blog and one that I thoroughly enjoy reading. I am glad that Sophy is doing ok. I have had all of my pets spayed and although traumatized at the time, they are doing great.

That expression on Sophy's face? I've seen it on my own rather too often of late, with only lack of sleep to blame. Glad that she's feeling better and that the other girls are letting her be. When she's perky again, please send her over to nip at my neighbors who are out talking quietly on the sidewalk at 3:00am. But not *quite* quietly enough.

Hugs from TX. And I agree, word verification is Polish this morning. Vanna, I'd really like to buy a vowel!

Hey - everyone with a pet understands. Our pets don't (we routinely get accused of *personally* sending six million Jewish kitties to the gas chamber, and other cruelties beyond belief), but all your readers do.

Our cats *hate* going to the vet; so much so that Cinnabar avoids Nimrod, and even hisses to keep him away while he still smells of the vet. It must be easier in a great many ways to have dogs (of course, at the same time, harder; nothing is easy!).

Oh, what a face! I'm so glad everything went off without a hitch. And no, you're not silly for being worried. You did the right thing, she'll feel fine soon ... and the smell of the vet's will wear off right about when she's ready to play with the other dogs. NIce how things work that way.

Lyn ... I am so sorry about your cat, but it is so good that you were there when he died. He'll be waiting for you, to comfort you, someday.

Aw poor little pup ; isn' t it touching when you have more than one dog that the others have to investigate & check if the invalid is okay? Do hope she has now made a full recovery and that you too have calmed down. I agree its very distressing :(