Midwinter Is Out, And Not A Moment Too Soon!

I mean, it's already December 10, right? Thursday week is the winter solstice, so it was high time I got down to it and made the creative thoughts that have been playing havoc in my mind for weeks do their bit. I finally finished making up the latest Celtic Memory Yarn this afternoon, named for the ancient festival of Midwinter (appropriated and redefined as Christmas by the Church of course, since they couldn't root it out altogether). When I'd skeined it up, I took it down to the Kerry forests to photograph it in a suitable location, but the high winds and heavy rain really didn't make that feasible so instead I cut branches of brightly-red-berried holly, collected lichened sticks and moss, and came home again to photograph it there. 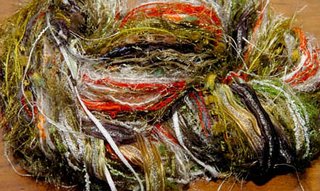 I wanted it to reflect all the ancient instinctive traditions that we still follow without quite knowing why - collecting greenery and berries, eating and drinking, giving gifts to each other, celebrating in these darkest days of winter because at last the year is turning.

Listed it just now on eBay, along with several non-designer yarns (including that lavender/purple cashwool you were asking about, UK Jo , and some more of those silk/cashmere yarns in pastel shades - not the one I'm using for the Travelling Cables and was using for the Hiking Scarf, but a slightly finer spun yarn with more of a sheen). That will be the last listing of yarns before Christmas, I think, and in the case of the Celtic Memory Midwinter, I hope people will buy it quickly, as otherwise the usual log jam in pre-Christmas posting might mean they won't get it until the New Year. But that's OK too, the magic in it works right through to February 1, which is the festival of Imbolc, dedicated to the goddess Brid or Brigit. It's a bit of a b-r to work on, with yarns all over the place and me frantic trying to find just the right blend to put in a particular place, but it's a great feeling when it's done.

Have you seen the instructions for those delightful felted beads on Knitty.com? How nice that site is and how
grateful I am to have it! She must be the most charming person, to provide us with all this pleasure. Must make the beads when I get more than ten consecutive seconds together. I did have a little time yesterday, after the Saturday morning lecture to journalism students, but instead I spent it out and about searching for even more cute little clear plastic totes to hold my ever-increasing WIPs. Now that I have my eye in for these desirable objects, I see them everywhere, at very affordable prices. Trouble is, they always have something else tucked inside - soft toys, games, make-up, appalling plastic high heels for kids... what do you do with these contents when all you want is the container? Anyway, I got a really nice one for €5.99, which is about US$7 or thereabouts: 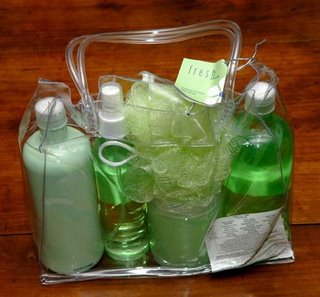 This one had questionable bath gels, scrubs, etc, which are now sitting on a shelf waiting to be used somehow. Oh I know - the dogs could do with a beauty treatment before Christmas, couldn't they? At least they'll smell nice! And the little tote now happily carries my Celtic Vest WIP. 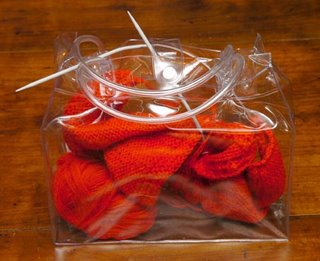 Isn't it perfect for the job? I feel even better when I see how much they're charging in magazines for knitting totes! And the Celtic Vest itself is progressing beautifully, with none of the problems which bedevilled the Eriskay. I've got up the back quite a good way, and have actually completed my very first Lavold motif (loud cheers from the onlookers). Well, it was an achievement for me anyway, because I'd been worried about it, but it wasn't that difficult in the end if you kept an eye on the increases and decreases. 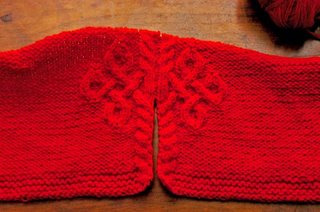 Not bad, eh? And an utterly pleasurable experience after the Selkie of Stornoway I can tell you!

Anne, thank you so very much for the clear and helpful tips on toe-up socks. Now that I know it doesn't have to be the thrice-dreaded Figure 8 cast-on, I'll try with the next pair. I really really want to be able to make the leg as long as my yarn will allow, and I can't plan that way when working top-down. Not when I have a limited amount of yarn anyway - it wouldn't be a problem, I suppose, if I were using a cone.

And the Travelling Cables Cardi is progressing too! Angeluna you are once, twice, three times a lady for sending me that pattern - there's a little lucky bag on its way to you even as we speak. I'm finding it far easier than I feared, and got up to the waistline at the back with no difficulty at all. 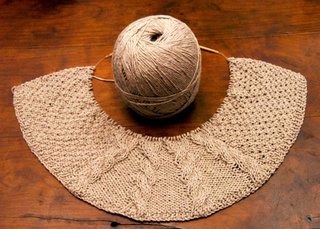 The smooth silk/cashmere seems to love the pattern too, and is behaving beautifully, showing off the stitches with really sharp definition. And I like the way Karabella has worked out a way to make the cables travel by increases and decreases rather than the old and tiresome method of cross-cabling constantly. I'm getting on to that stage next, so hope the luck holds out.

And those of you who bewailed the passing of the Irish Hiking Scarf in the same yarn, please don't be upset about it. It was just that I needed a good skein of washed silk/cashmere right away, and didn't want to wait. It isn't a problem - cabled scarves I can do in my sleep and it wouldn't take me half an hour to get back to the stage I was at anyway. Besides I wanted to try the scarf in the lavender/purple cashwool... Don't you get times when you can't wait to try how a particular yarn will look in a particular pattern or stitch?

With all this work going on (and the day job too, which is going to be a real beast between now and Christmas, as everyone wants several weeks work written up ahead, so they can go off on a break), the only chance I get to work on the Blackberry Pie socks is when I'm forcibly kept away from other tasks. 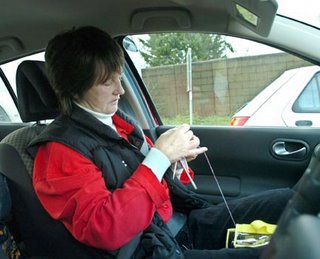 Like sitting in the car. DH took this one while we were stationary in a traffic jam (he has been known to shoot pictures when actually driving, but don't try that at home, please - after all it's his job! And truly he only does it when he's chasing someone who really really doesn't want to be photographed like a minor Royal or an incognito film star.)

There is every chance that Christmas will be missed this year entirely if a move on isn't instigated right NOW.
Posted by Jo at Celtic Memory Yarns at 9:51 pm

I was beginning to worry about you when the days were adding up without a new post.

It's amazing you found time to put together such a fascinating blend of yarns in what sounds like a hectic schedule.

The Celtic vest with the Lavold motif is very striking.

Hang onto your needles, these next couple weeks will blur past.

Cheers! Hooray! Well Done! Go Girl! All for the Celtic Vest. It is smashing!~
I must go to ebay, as I have been checking for your yarn for a few days!
Midwinter - can't be!

I was begining to moan about our rain.(2days). Then I spoke to my uncle in Louth. Now I feel like a spoiled child.
Of course January hasn't arrived yet.
This year we are having our Christmas celebration with my parents close to the Solistice. We are good Druids. LOL

I am thrilled with the photos of your Celtic Vest and the Well Travelled Cables. You chose both yarns so well and both are very, very beautiful. The Lavold motif is simply elegant. Bravo. You are such an accomplished knitter, that only a Stornaway curse could explain the barricades you encountered in the earlier project. Downright weird! Absolutely love MidWinter. Where is Muffy?
Think I sat for five straight hours trying to push through some progress on the BFs clogs (of course, I only started them yesterday). Wish he didn't have such big feet! I love the results, but the count, count, count every row is exasperating sometimes. And I won't leave an error, even in felting, so there was definitely some frogging back a time or two. Wish I could get over that habit.

The yarn is gorgeous, and your WIPs are looking great too.

Oh your life sounds as busy as mine is right now, and you are on the other side of the world. The yarn is beautiful, so are your WIPs.

Before we know it, it will be January>

It's hard to believe the Solstice is almost here already! Thank goodness we can look forward to longer days!

The knitting is coming along beautifully! I so love the red, especially.

I love your yarn. It makes me want to dance around a fire. I have to go look on Ebay now.

I was a very good Druid this year. Went to the tree farm and cut our own tree. Asked the tree for permission, and thanked it for gracing our home, of course, before I began sawing.

We have gone from icicles to shirtsleeves this week, and back again next week, I expect.

Jo, I love the close-ups and descriptions of Midwinter (nice Celtic Knot, by the way!). It's GORGEOUS.

I would love to buy two skeins, or trade for equal value of something you find hard to obtain in West Cork. Which would you prefer?

If I ever get given cheap bath items I use them as household cleaner . I bought my friend a cotton quilt in a great see through zip bag so if he doesn't want to keep it I'll gladly take it home.

Cheapie shampoo and bath stuff can be very drying for your pet's skin but it's wonderful for using to wash your delicate clothing.

I find making them entirely by hand gets a bit painful, so being able to finish them off in the washing machine along with regular laundry helps a lot!

Jo, the Midwinter yarn is stunning! The Celtic Vest is so beautifully coming along, brava!.
I know...where is this time going anyway? and why so.....fast!

I thought that you may be interested in our latest book called Weaving Tapestry in a Rural Ireland: TAIPÉIS GAEL, DONEGAL. If you would like to review a copy on your site I would be delighted to send you a review copy.

rolling on the floor here :) I had to research back through your blog to find this cursing of "starmore". (Great blog by the way :)) Maybe I could focus on her really hard next time she comes in the stornoway arts centre and demand she releases the curse or i'll not let her in for coffee.