What You Do When You're Really Desperate For Yarn

You might have noticed that you haven't heard too much of the Anny Blatt jacket lately. Oh boy is that a sore subject! I finished all the pieces. I sewed them together - why oh WHY is that one of the worst tasks in the business? Then I started on the neck and front bands.

The mistake was probably to think I could slip in a quick bit of crochet and get the bands done in double quick time. Why bother casting on 7 stitches and working 5000 rows when a crochet hook could do it in a quarter of the time? Why indeed? Well because for one thing, a knitted band can be pinned in place as you go, and if you count the rows, you can use the same length either side, thereby GETTING AN EVEN BALANCE on the fronts.

Which I didn't, of course. I roared off up the straight, congratulating myself on my cleverness and thinking sympathetically of all those poor souls who never touch a crochet hook in case it corrupts their knitting skills. I carefully tightened up the rather loose edging to make a nice firm band, and even remembered to put in buttonholes (2 ch, miss 2 sts, continue in dc, work the 2 ch in dc on the next row). 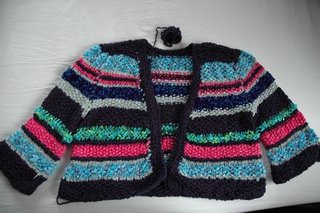 You can see it, can't you? Those fronts (albeit not finished) are too tight, too short for the rest of the jacket. I didn't want to see it, or believe it. I just kept on hooking with determination, that tiny voice in my brain ignored. This morning, however, I gave in and tried it on. Bleedin' bloody 'ell as the twelfth Earl of Gurney would have said. It was no use pretending any longer. I tore it off in fury, ripped back the banding and hurled the jacket into the WIP basket. I never want to see it again. And yet, I did spend a lot of time working out the colour scheme and incorporating some rather exclusive yarns. I can't just leave it like that. Sooner or later I will have to face up to the worst job of all: taking up a project you are already completely sick of and can't imagine why you ever started, and slowly, painstakingly, doing the job properly.

And you know something even worse? Now that I think of it, I hadn't even finished working in all those loose ends from the stripes. Now that really is a thankless task. So near and yet so far... 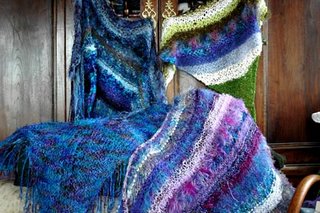 In the foreground on the left is the one I think you are eyeing up, in Cherry Tree Hill's Ballerina - I think the colourway was Tropical Storm. Next to it the purplish one is in Connemara Twilight, one of my own yarns, while at the back are, reading left to right, another two of my own samples, Midnight on Mangerton and Springtime in West Cork.

I'll have to call a halt on shawls, although I know that Angie can't. I mean, I got a glorious Blue Heron beaded-effect rayon yarn from Gill at WoollyWorks not long ago. Again, it's ideal for a shawl but how many shawls can a girl make whether to wear or give away? Perhaps I should try one of those knitted-sideways Celtic Vests on Knitty-Noddy's site? 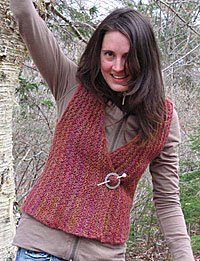 This pic shows it made in Fleece Artist's Scotian Silk, but I imagine the Blue Heron would have much the same drape. Can one have too many vests? (You do know by the way, don't you, that in the UK and Ireland a vest is still a virtuous heavyweight undergarment, worn most of the year round but never mentioned in polite company? What you call a vest we generally call a waistcoat or, if really trendy, a gilet.)

Lyn asked if the thrush at the pond in my last posting really had her tail in the water. Yes she did, and it was something neither of us had ever seen before. Birds bathing, yes, but never standing transfixed with tails dipping below the surface. Wanda was asking if it was a natural spring that fed that little pond. I wish it were, but isn't. It's totally home made in fact. We always dreamed of a place with a stream running through, but when we finally landed here, after quite a bit of wandering, we vowed never to leave. And so, we made our own tiny pond. It wasn't that difficult - a child's plastic paddling pool, some black plastic liner, a lot of spadework, and some crafty landscaping with mossy rocks and plants. Green algae was a problem until, thanks to the World Wide Web, we sourced a solar pump all the way from China. Of course we got laughed at - the idea of a solar pump in Ireland - but I always knew that we got quite a lot of sunshine actually, though not very much and never for very long. Most days we get a cheery trickle of water down through a trough I made of stones, which keeps the pond fresh and clear.

The rowan berries are ripening and soon we'll have thrushes all over them. It would be nice to have enough for rowan jelly just ONE year, but it is lovely to see the birds arriving to feed on them. I'll let you see a picture as soon as they do - it won't be long now.

We have a saying in Ireland, "walking on hungry grass." It is supposed to be a folk memory of the Famine, and refers to those times when you get a sudden desperate craving for food, and must have something immediately or you feel you'll collapse. Do you know that feeling with yarn? The urge to have something new in your sticky little paws right this minute, no matter how much stash there is at home? For some reason today I remembered just such a time I felt that desperation in a shopping mall. It was a huge, impersonal, brightly lit, noisy echoing sort of place, with all kinds of chainstore outlets selling cheap imports, but nothing, absolutely nothing to do with knitting or indeed crafts of any kind. I had had a trying day and really needed something to comfort me in an anonymous hotel room that evening. It was getting on to closing time and it didn't look as though my luck was in.

As a last resort I went into one shop selling tricksy stuff for teenagers and drifted towards the jewellery and accessories section. There I saw a whole rack of scarves marked down to half nothing. Some were bright and silky, others thick and chunky. In that moment my life was saved. I bought half a dozen and took them back to my hotel. That night I carefully unpicked, unravelled, untwisted and wound, until I had a myriad different coloured balls of yarn on my bedside table. I didn't knit anything - I didn't have needles with me - but it didn't matter. I had found yarn in some form, and that was fix enough until I could reach the safety of the home stash.

I still have those balls of unpicked yarn. They're not very good stuff really, and you wouldn't expect them to be. I probably never will use them. But they remind me of what can save your sanity in times of pressure.
Posted by Jo at Celtic Memory Yarns at 10:53 pm

Oh, the frustration of the too-tight band. Have done it myself. In fact, a few weeks ago I unpulled a complete cardi that had never been on human body due to that exact same malady. Mind you, the cardigan had been in the fix-it-one-day pile for quite a few years. At least I now have some nice moorit handspun to play around with or find time to start something anew (something with no bands, I'm guessing).
I agree with you about socks, too. I have a few pairs that have relied on the patterning of the yarn for its appeal, with simple stocking stitch to dream along with.
I am working on a commission at the moment - handspun black plied alpaca (same fibre as the trellis scarf, but plied) to be made into the famous Clapotis (see Knitty). I've made a couple of them for myself with other fibres, but this is working out well.
In March, I came over your way (well, it was to France actually, but that's very close to you, compared to here) on a bus trip, where I brought out my sock-knitting in ss to keep my hands busy. Nearly everyone on the bus eventually made (positive) comments to me, and I got the impression they wished they'd thought to do the same!

I've never even thought of buying scarves to sacrifice for the yarn. Then again, I have two great yarn shops within walking distance of my office, so I can't say I've been in that desperate a position thus far.

I'm really enjoying your writing. Thank you for blogging.

Oh dear ..you'll be able to face the Anny Blatt again . The best scarves I ever bought to unpick were Sari-silk yarn before it arrived as yarn here.This was at W.O.M.A.D .They were £10.00s and unpicked at least three skeins each .Sadly the stuff itches like crazy but it is good for making flowers and adding to multi-yarn shawls.