I Sing Of Sheep and Deer and Yarn and Lantern Moons

Sometimes you get a day gifted from the gods themselves and you give thanks for it. I'd been working since early morning on some copy that had to be emailed out urgently, and by 11 am my brain felt like it had gone five rounds in the boxing ring. The clouds were down and it was raining gently, but I needed OUT. Headed for Killarney, turning off as I always do onto a tiny side boreen before reaching the busy tourist town itself. That way I circumnavigate the crowds and emerge right by Muckross Forest. Once I see this view any stress dissolves instantly. 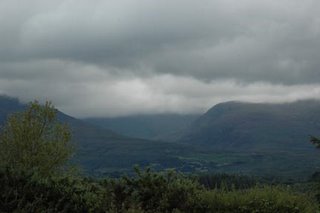 I pottered along in low gear, taking my time, enjoying the moss-covered stone walls, the montbretia flowering in the ditches, the blackberries ripening. Then I met two yarn designers on their way to work... 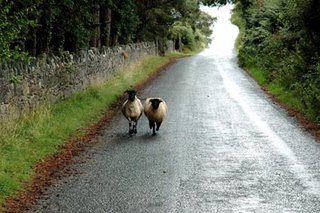 and wished them a good day, and good production.

I was driving slowly up the avenue to Muckross House when suddenly a deer trotted across the road in front of me and disappeared into the forest. 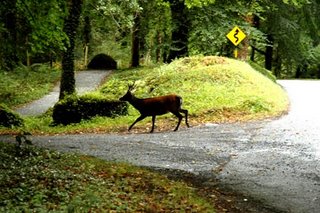 I cut the engine, left the car on the verge and went straight in after it on foot, clutching my camera. I could see it moving slowly away through the thicket and followed as silently as I could. Every time it stopped to lift its head and listen, I froze. Gradually I drew closer. Once I was fully in view, I moved as calmly and softly as possible, avoiding eye contact, keeping on a parallel path rather than a converging one, trying to make my movements those of a peaceful ruminant animal, not a dangerous human. I got closer... 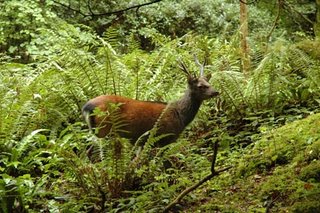 and closer still. The deer decided to accept me as a harmless forest resident and began to graze. I hunkered down on the ground, so close I could have reached out and stroked it, and for about ten minutes we shared the woods, the dripping trees, the scent of the wet earth. Raised voices beyond the wood, on the road, made it prick up its ears and glance around, but for me there was only acceptance and serenity. I have never felt so privileged, so honoured. 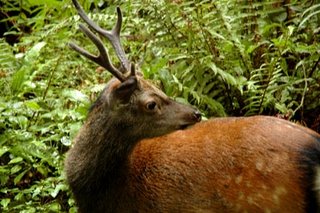 I could have stayed there all day, but I thought I had been given enough, so I softly got up and left. The deer glanced mildly at me and wandered off into the deeper woods where no paths led. The sense of joy filled me right through all the way up to the house.

And things kept going right! When I went into Muckross Weavers, there were new yarn cones for sale! 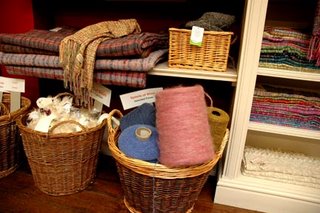 Oh I know one basket isn't much, but at least they've got the idea now. I trawled through them and of course took that huge pink one at the front - plus a rather nice red with tiny orange fluffs which I'd seen there last time and had regretted not buying then. 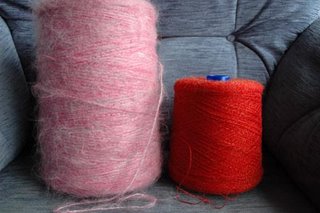 The pink is a rather attractive colour - the kind you'd get if you went out early with a nice big bowl and gathered dew-fresh really really ripe raspberries, then crushed them lightly with a silver spoon before adding a tablespoon or two - no more - of fresh cream and stirring it gently. I would say, with the mohair content, it's about double knitting thickness. The bright orange-red is thinner, maybe 3 ply, maybe 2 - it's 2/16ths, I think.

Even more pleasure when I finally got home, as my new Lantern Moon needles had arrived from Knitty-Noddy. I don't know how Evelyn does it, but I get orders from her within three or four days, whereas post from Dublin can take a week. These are finer needles, for possible lacework or even more socks and they are very delicate.

Which brings me to the tragedies of the day, the reminders that into every life a little rain must fall (although you'd think I'd have got enough of that in Killarney), and that no 24 hours may be without its upsets. I had hung the tiny new Lantern Moons on the back of a chair to relax and unkink, and somehow leant back against one of them! A cracking sound, a shriek from me, and despair raged around the dining room. DH, bless his heart, took over, carried the damaged little circular tenderly downstairs and ministered to it with various magic glues of his concocting. Then he tucked it up in a clamp for the night and left it resting comfortably. 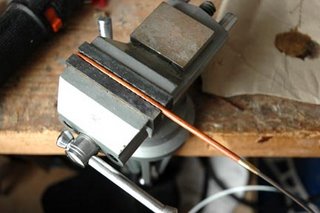 I felt so guilty. Those needles came courageously all the way from Vietnam to Oregon and then across the Atlantic to me, and on their very first night I'm the cause of one of them breaking a leg! What was its sister thinking? What would Evelyn at Knitty-Noddy think? I'm not a fit parent! I would have taken the second pair to bed, only I was afraid of causing another tragedy.

Anyway this morning the leg seems to have set well, so I sanded it very gently with an emery board. In due course I'll give it a tiny polish with beeswax and test it out so so carefully...

It was almost midnight, and something whispered, 'Why not do another ten-row pattern of the Milanese lace on the second sleeve of the Elann cardi?' A good idea, I thought. One sleeve is now progressing on four home-made bamboo dpns, the other is being worked on two circulars. I got going on the two circulars. Midnight, half past twelve, quarter to one. Only another four rows of the pattern to go... Horror! For the first time EVER, the stitches at the other end of the row, instead of staying neatly on the cable, had somehow got themselves up to the needle end and SLID OFF! By the time I discovered this catastrophe, the pulling and hauling and stretching which are an inevitable concomitant of knitting in the round had done their worst. I had about twenty dropped stitches, some of them several rows down, in a pattern that involves more yo's and k 2 togs than you can imagine.

It was a bad late night session. I ate half a bar of dark chocolate (with chopped almonds and orange peel) before retiring. But once abed, I drew the cloak of memory around me and was back in the forest with that accepting, gentle deer. Some things stay with you always.
Posted by Jo at Celtic Memory Yarns at 9:55 am

I must say the locals are good-looking ! I love the cloth on the shelf that appears to have a scarf on it .

Lovely post, makes me wish I could hop on a plane and join you on one of your walks. My woods seem all dry and crackly these days, not mossy.

I almost cried at your description of your time with the deer. How lovely.

I definitely whimpered at the sound of the Lantern Moon cracking. My LYS got them in just yesterday so I got to try them out a little. May I ask what glue was used to set the patient's leg? My email address is rachel2ATrogers.com

So I'll be the only one asking I am sure -- it was hard to tell with nothing to determine size - was it a Sitka deer or a Sitka/Red cross. Doesn't matter really because it was beautiful and what a grand way to spend some time. And here is another weird question - do you have ticks there?? We are so paranoid about ticks around here with Lyme disease, Babesosis, etc. There are so few people who live here who haven't been hit with one or both of them.

Love your back roads - Ours used to be nice with more farms but now the farms are turning into growing homes on them. But we do have quite a few wineries still :D

The Horror of the broken needle. How did the fix and polish turn out??

Have you guys tried Geocaching? You get to tramp around the woods etc and find a treasure at the end. I'm the dorky one in our family who enjoys it --waiting for cooler to do a few more here. The chiggers and ticks have been horrendous this year.

You had the deer and you had the yarn. You should not have pushed your luck...

Jo, the priviledge of being with the deerin its own home was marvelous. Unfurtunately, we can stand beside them in our gardens as they munch on their favourite item in the salad bar - hostas and early in the season tulips! They are more beautiful in their own setting, but unfortunately we have moved in on them!
OH, OH the poor needle - but it seems to be okay! I like the price of the Sea Silk at Knitty Noddy. Might just buy it there, as it is rather more pricey in other shops.
DPNs by Lantern Moon were $22.95 at my LYS.

Beautiful yarn! I am always on the hunt for cones of yarn, and so seldom find it.

I crept alongside you through the rain washed woods, communing silently with the deer. A precious experience.

About the needle. Beeswax tends to not dry --always just slightly tacky. It's better to use carnuba wax! Let us know if you have questions.

The wool designers made me laugh out loud and after the day I had I needed a good laugh. Thank you

My DH and I enjoyed your country roads, yarn designers, and deer. We moved 30 miles north of the city 1 1/2 years ago. When we have to go "into town" it's stressful; on the way home, we reach the country road, and inevitably sigh in unison! Your drive struck a familiar chord.

It's so beautiful there, it quite took my breath away, a lovely magical moment you had there in the woods. Great save on the needles....and the yarn.

Hi Jo! Thanks so much for your comments - what a lovely thing to find in the morning :0) I have some info for you - email me at stuart434ATshawDOTca, and I'll send it on.

it sounds like you were riding a bike, not driving—is that right?
the woods look lovly and i wish i could see them

Loved your photos, esp. the close one of the deer. felt a little like I was there too. Thanks!

Amazing photo of the deer! It was such an odd moment for me looking at it, as I'm from Iowa, the deer are the typical white-tail deer here. Thanks for a beautiful photo!