A Cold Spring, Warm Socks, And Yes, That Lost Island

It has indeed been some six weeks since you last heard from me. Those involved in Sock Madness won't ask why - it's been a busy time on the knitting front, involving many late-night sessions and all-too-frequent callings on the heavens to enquire why one had been so insane as to get tied up in this annual survival course yet again. 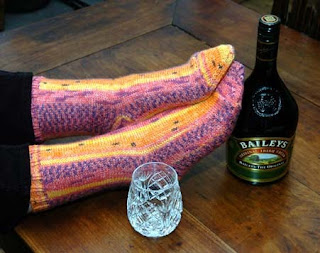 There were rather unusual Side to Side socks to be made, the brainchild of MtMom, which really challenged one's concept of how a sock is constructed, since these were made flat with a provisional cast-on and then grafted so that the toe, heel and cuff could be worked in the round. Learned quite a bit from that one. 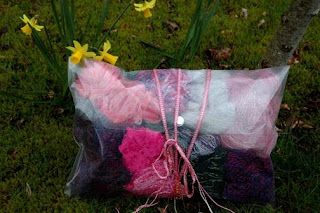 In between these rounds, somehow found time to dye up some new sock yarns, as well as create a new Designer Shawl Kit, this time in the Wild Roses colourway. I like these kits - everything tucked into one bag, ready for your inner designer to run wild and whip up a unique item. They take time to get ready though, and the antique brass skein winder was kept pretty busy. 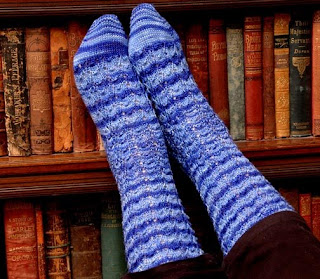 The most recent round of Sock Madness brought a really delightful pattern from Taya, christened GAMS, not, as you might think, in reference to the shapely legs which they would subsequently decorate, but as an acronym for Girls Are Meaner Sometimes. (I wonder about that girl, I really do...) 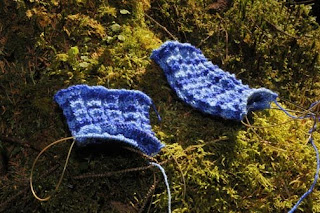 Took those out to Gougane Barra in an early stage of their creation one sunny although chilly, afternoon, since they deserved a nice place for their progress picture. Here they are, resting on the thick moss which envelops everything here. 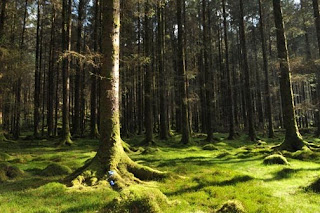 And just to show you what a wonderful, cathedral-like place these woods are, here is the entire scene, the one they didn't get to see on the Sock Madness page. You can just see the socks resting on the tree root in the foreground, dwarfed by the shadowy green immensity of the old forest.

We went up to the Poll, that remote rugged glen high up behind Gougane Barra, where once an ancient road led over the mountains to Kerry. 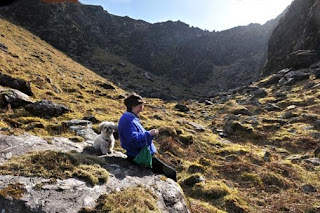 This old track was much used by pilgrims, pedlars, and those fleeing from pursuit, over the centuries, but now there is a safer track winding at a lower level, well away from these challenging rocks. Me, I'd take the old road any time, and if it means climbing like a monkey, well that would be good too. It was chilly out there, though, with an easterly wind funnelling up the valley - cold enough to haul out the ski headband, and find it difficult to work the stitches with frozen fingers.

Now, I hadn't forgotten. I was going to tell you this time round about that wonderful little lost island, and I will. I've been delaying, because I was hoping that I could actually get out to it first, and show you pictures of what it's like there. However, the weather has been harsh this spring in West Cork, a most unusual occurrence, and sea voyages in a kayak, no matter how short the distance, have been considered inadvisable. So I looked at it this way, to console myself. You can share the waiting, impatient time with me, know why it is we must go there, and then, when the right day dawns, we'll make that trip together. OK with you? Yes, that's the way I'd like it to happen too.

I first discovered this place when my editor suggested that one particular area was a bit vague in the book and asked for some more information. It was in fact a region I didn't know particularly well, so on a quiet day, when DH was busy elsewhere, I headed off with only Sophy Wackles for company, to explore. Down to Glandore and Union Hall and then, in the best traditions of seeking adventure, just take the by roads, keep in the general direction of the sea, and wait for what happens next.

It's a quiet, unfrequented part of West Cork, well away from the well-trodden tourist routes, with dusty laneways and plenty of grass growing in the middle of them, which is always a good sign. 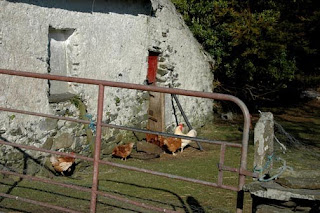 We passed this old-fashioned farmyard with hens clucking outside the whitewashed shed. That simple scene is something you don't see everywhere these days, although it was common enough in my childhood. I was able to capture it just by leaning out of the car window on the way past. 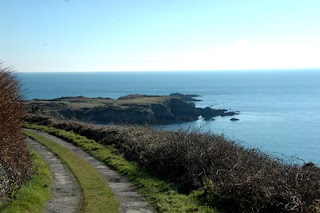 Then we started to descend down towards the sea. A glittering blue sea, but don't let that deceive you, the wind chill made it feel like the North Pole. Down, down, the lane looping peacefully to cope with the gradient. Sophy Wackles was clinging to her seat resentfully, and I was feeling an increasing sense of excitement that we were coming to somewhere very special. 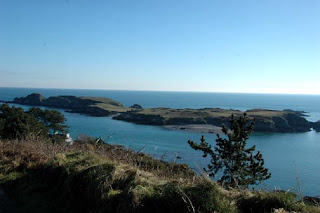 And then I saw it in full. A lovely little lost island, waiting there for us. 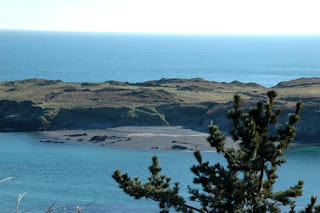 Will you look at that beach? Nobody there, deserted and empty. But at night, surely, the seals come to sing there, and the sea birds make their nests undisturbed and safe.

The lane ended in a little stone pier where we could look across to the island and see that there were ruins on it. 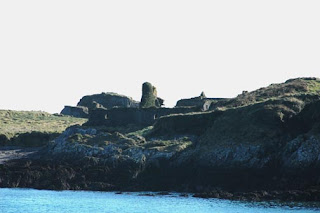 This is the best I was able to do with my own meagre photographic skills. Next time I'll bring DH, I promise. But look at those ruins. What are they? Who lived there?


I was seized with an uncontrollable desire to get out to that island, wander all over it, talk to it, discover its secrets. But there was a reasonable stretch of deep, icy water between us, and I have more sense than to borrow a boat (if there were one) and set out alone with nobody knowing where I was. So I had to possess my soul in patience and try to find out more

It's called Rabbit Island. A bit prosaic, but probably accurate. Back home, couldn't find anything more than that in all my archaeological and historical texts, so did a bit of telephoning round and found a man who used to live near Union Hall in childhood. He knew the island well. 'One family was still there right up into the 1970s,' he told me. 'Three brothers there were, and they made their living by fishing mostly.' When they grew older though, the brothers decided to make the move to the mainland, and left their island home. And so it has remained ever since.

Now there is a little village some two or three miles down the coast (that's as the crow flies - by road it takes about fifteen miles and a great many inland-and-out-again little lanes) which hires out kayaks in summer. Rest assured that when the weather conditions are safer, Celtic Memory will be out there like a flash. They may call it Rabbit Island on the OS maps, but we know better, don't we? It's Roan Inish, isn't it? It's a magical island

We'll go there soon, I promise. You can't want it more than I do.