Cuchulainn's Stone and The Cave of the Cats

We had to gallop right around the country recently, to get some pictures of particularly important places for De Next Book before the autumn winds got going with a vengeance.  There are so many wonderful things to see, and it never ceases to appal me that I have visited so few of them.  These were just the ones which absolutely, positively, definitely, couldn't be overlooked. 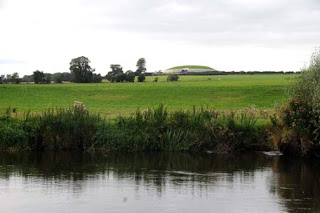 That mound rising in the distance is Newgrange, where at the winter solstice the rising sun strikes directly through a narrow aperture, along a stone passageway, and illuminates the very heart of the mound.  It's generally called a passage grave, but was more probably a ritual site of worship used by the ancient druids.  That's the River Boyne in the foreground and no, we didn't go any closer because the crowds at Newgrange are fairly extreme, any time of day or year.  Better to see it looking peaceful from a distance, don't you think?

The goddess Brigit, later subsumed into St Brigid, is well loved everywhere in Ireland, and there are hundreds of sacred wells bearing her name.  She is particularly associated with Kildare, and there are actually two wells here, both equally well patronised. 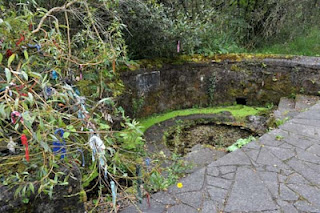 Apparently this older one, being close to a busy main road, was considered dangerous for worshippers by the local authorities, so they created a second one down a quiet lane a hundred yards away. 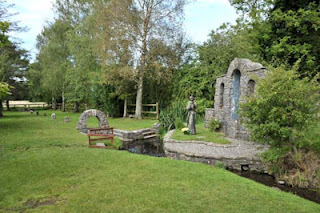 ﻿The new one is certainly more spacious, with a statue of Brigit and a nice air of calm about it.  Maybe one is for the goddess and the other for the saint? 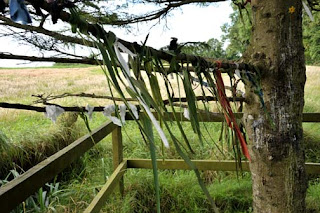 I really liked these rushes or flags which had been plucked from just outside the wooden fence at the second well and plaited on to the tree branches.  You often see rags and cords tied to trees at sacred wells, but using the natural rushes was nice.  Might do the same myself next time I pass a well.

One ancient monument I was determined to find was Cuchulainn's Stone up in Co. Louth 'in a field somewhere'.  Cuchulainn, that mighty young warrior of the Red Branch Knights, fought a one-man battle against the forces of Maeve of Connaught in the ancient epic known as the Tain.  In the end Maeve had to resort to druidic magic to kill her adversary, but even then Cuchulainn managed to tie himself to a tall stone so that he could die upright with his sword in his hand.  When his spirit finally passed on, the Morrigan, or death goddess, came and perched on his shoulder in the guise of a raven.  There is a bronze statue representing that moment in the General Post Office on Dublin's O'Connell Street, but out in the middle of a lonely field in Louth, as dusk was falling, we found the actual stone. 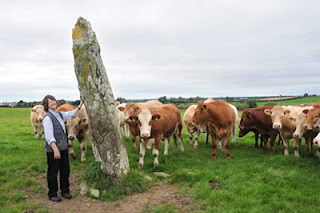 As you can see, ﻿it had its guardians who clustered closely around, carefully watching to see that we didn't intend any disrespect to the great Cuchulainn.

Oh we went all over the place to get our pictures. 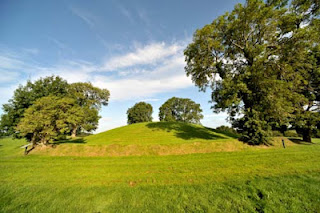 Emain Macha or Navan Fort, just outside Armagh, ﻿was once the proud palace of King Conor MacNessa and his Red Branch Knights. 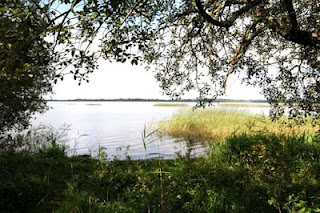 Lough Derravaragh is the very place where the Children of Lir were changed into swans by their cruel stepmother and condemned to three times three hundred years of wandering before their enchantment ended.  It's such a peaceful place in the Irish midlands, yet you can easily imagine those four beautiful children stepping into the clear shallow water to bathe, and then being struck by the queen's wand and becoming graceful white-feathered swans. 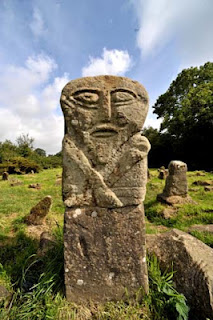 What do you think of this?  It's a strange statue, now in a very old graveyard on Boa Island in Co. Cavan, but clearly brought there from somewhere else.  It is two-sided, one face severe, the other smiling.

I suspect it could be the two aspects of the ancient earth deities, male and female, who were depended on for crops, fertility, good weather and good health before we started to personalise and name individual spirits for different purposes.

Whatever their original purpose, they're keeping their history to themselves.  And quite rightly too.  Who are we, to demand a full and thorough explanation of everything we find? 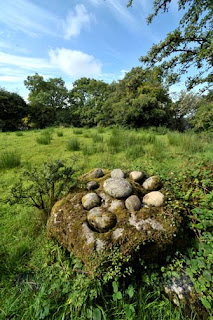 And here is something rather strange, and we're back to Brigit again.  Miles from anywhere, you stop on a narrow lane and tramp across the fields to a tiny ruined church.  Behind that church is an old graveyard.  In the far wall of the graveyard, a well-used gap indicates much traffic over the centuries.  Beyond it a faint track leads down almost to the edge of a lake, and here stands Brigit's Stone.  A huge drum-shaped rock has a number of deep depressions on top, each one filled by a rounded stone that needs two hands to lift it.

Know what they are, what they represent?  Well, I've seen something like it before, down in Kerry, but never one specifically dedicated to a goddess before.  And it throws an interesting light on the character of that same goddess, because these are Cursing Stones.  Or, as I would prefer to call them, Wishing Stones, because that was, in all probability, their usual use.   You came down here, grasped your chosen stone, and turned it sunwise (ok, modernistas, clockwise if you prefer, but this was long before clocks) and at the same time whispered your wish.  Then you left an offering and went away, hopeful that the goddess had heard.

Of course, if your mind was full of angry thoughts and you wished bad luck on someone who had annoyed you, then you could turn the stone deliberately anti-clockwise or widdershins, while wishing evil to befall your enemy.  But it's never a good idea to wish bad luck on someone.  Such wishes have a way of coming back on you.  So let's call them Wishing Stones and should you ever find such a site, have good thoughts in your heart and wish good fortune to all the world as you turn the stone sunwise.

I was talking of things happening in the distant past, but clearly these stones are still very much in use.  I lifted one to check its weight, and found a very modern coin underneath.  So recently placed there in fact that it had not had time to tarnish.  Let's hope the user turned the stone in the right direction.

I mentioned Queen Maeve of Connaught earlier, and of course we had to visit Rathcroghan where her palace once stood. 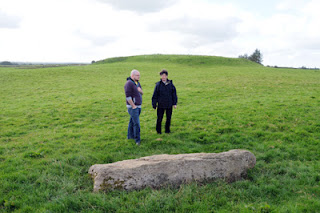 Gary Dempsey, the man in charge, was very helpful in taking us around and explaining the different sites.  Here he is showing me a recumbent stone which gives off a strong electro-magnetic charge and is probably linked into a ley line that leads to the mound behind us in the picture.

But perhaps the strangest place we saw at Rathcroghan was The Cave of the Cats, a very old limestone underground chamber known for centuries and believed to be an entrance to the Otherworld, under the guardianship of the Morrigan herself.  Getting into the cave was not an easy job, as it involved lying on your back and sliding down a muddy slope into pitch dark with only inches to spare between you and the rocky roof above.  Being a coward, I encouraged Gary, who after all knew the place, to go first, while DH tried to ensure that all his cameras were tucked out of harm's way. 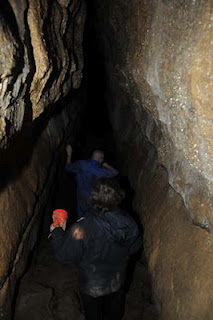 The roof was quite high once you got into the natural subterranean cavern, but it was narrow and dark and rather claustrophobic. 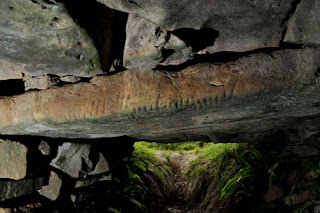 Look at this superb ogham stone over the lintel.  As far as I recall, it says 'Fiach, son of Maeve', but how it got into the Cave of the Cats instead of standing upright in a field where it can easily be read, I don't know.  Ask Maeve.  Or the Morrigan.

Now here is the strangest thing of all.  As I was inching my way out, on my back, trying to push upwards towards the beckoning light, I thought my senses had temporarily left me.  I could hear purring in my ear!

And there, just outside, by the entrance, was a small white kitten, curled up in the grass.  No, really!  It seemed to be encouraging me as I struggled towards the light and the air. 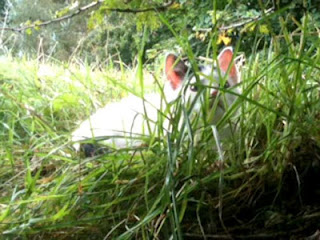 I hope you appreciate this picture.  I really hope you do.  Because it wasn't easy to get.  Bear in mind that I was lying on my back in a very narrow muddy sloping space, encased in an absolutely filthy muddy raincoat.  Somehow I managed to get my hand into my pocket and extract my mobile phone, twist around, and take a shaky picture.  Because it was the most extraordinary experience of my life.  Just when I was thinking that I really, really didn't like where I was, it was there.  Purring into my ear! 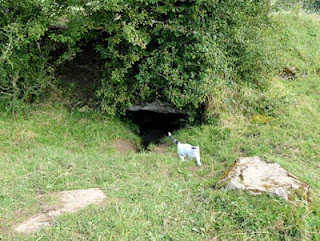 'Yes, I've seen her here before,' said Gary, once we were all safely outside once more, picking the little thing up and stroking her gently while she purred even harder.  'I don't know where she calls home, but she just turns up when I arrive.  Sometimes she even comes into the cave with me and keeps me company.'

Well.  What do you think of that?  No, of course I didn't try to bring her away!  Is it mad you are?  What kind of misfortune do  you think that would bring down on me?
Posted by Jo at Celtic Memory Yarns at 5:21 pm 9 comments: