In Which Wondrous Wanderings Are Undertaken in Wales, Muffy the Yarnslayer Suffers a Mishap, and The New Autumn Yarns Are Revealed 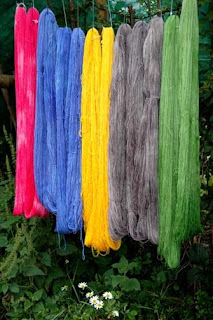 A soothing picture of the new autumn collection first. More on the yarns later, but this is to calm your fears about Muffy the Yarnslayer. She has been in the wars, and no mistake. I discovered her one afternoon in a hideous state, one eye totally wrecked, and the poor little dog in dreadful distress, trying to hide in her bed. I don't know what happened, since she was safely enclosed within the gardens, but obviously she ran into something sharp with considerable force. Rushed her to the lovely Dutch vet who lives not far away (just before the haunted castle, turn right up a very winding lane, beyond the two cottages...) and he sedated her and soothed her before turning his attention to a semi-hysterical Celtic Memory. Which is as it should be.


Several days of worry and telephoning, and the little warrior came home, now a very creditable Pirate Princess. When she's pretty enough for your sensibilities once more, I'll put on her velvet eye patch and show her off here, but not just yet. We'll let the fur grow back first.


There is definitely something to be said for not thinking too much. Muffy is now as happy as a sandboy, bouncing around and enjoying life. It was I who had to do the adjusting, but I'm getting there. And she will look very rakish with the eye patch.

Somewhat earlier than this mishap, we wandered off to Wales for a weekend. Had been wanting to try the Cork-Swansea ferry for ages, and since several things could be achieved on one trip, off we went. You sail at night, and arrive in Wales nice and early in the morning.

Gosh, I'd forgotten how twisty and winding the back roads of Wales can be - and just how much more crowded the UK is than Ireland (about 60m people as compared to 4m). This being high summer, every lane was jammed with caravans and cars proceeding at a snail's pace. And I was stressed because I wanted to get to several places before they closed... 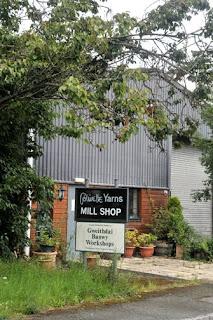 HERE, for example. How long have I imagined getting to this little treasure cave hidden deep in the Welsh hills, and finally I'd made it! 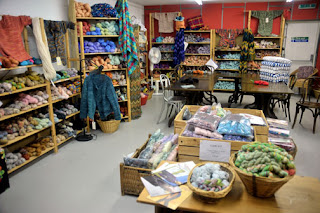 You don't need me to tell you about the amazing Colinette colours. 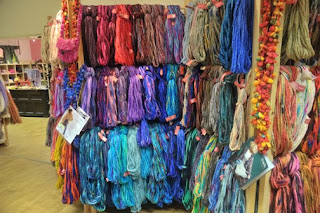 Ran around wildly, trying to see everything at once, grasping at bright jewel-like colours very much like a greedy thief in Aladdin's cave. But time was marching on and we had to make somewhere ELSE before too long. And experience was already showing that short map distances could take till Tibb's Eve to traverse on a busy summer weekend in Wales. So onwards and upwards, until finally we crossed the invisible border into England and Cheshire - 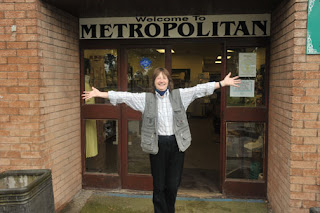 And arrived HERE! Another long-wished-for-visiting-spot on the Celtic Memory memorandum pad. Metropolitan, where all good machine knitters want to spend the rest of their lives.

I'd had this recurring, maddening, problem with my trusty Brother KH230 and ribber. In that they simply didn't want to know each other. Working separately they were fine - bring them together, and disaster ensued. 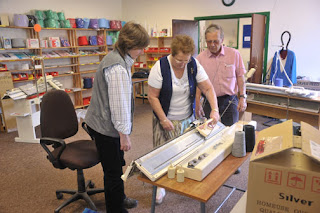 Oh the simplicity of bringing your problem to the right place! Mark diagnosed the difficulty without even laying a hand on the double monster. 'Wrong clamps' he said, instantly. And went off to find the right kind. Who would have thought that the difference of a millimetre in the angle of clamps could cause such heartache and wasted yarn? Sure enough, once we'd fitted the correct ones, Carol worked several rows of perfect ribbing on the KH230 and all was well.

Of course there were other goodies to look at. Well, as we were there, and had a nice big car with us, it seemed only sensible. You would have done the same, wouldn't you? And these divine new (did you read that, no, I didn't say 'vintage', I didn't say 'pre-loved', I didn't say 'well used', I didn't say 'disaster zones') Silver Reeds were set up in the same room, so when Carol offered to show me how beautifully they worked, naturally I jumped at the chance. 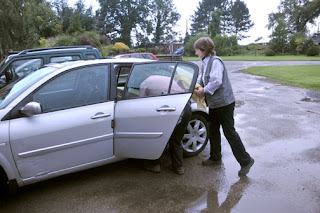 Which sort of.... well, fortunately DH had gone off to photograph some bees around the back of the building (they're farmers too, Carol and Mark, isn't that nice?) so we were able to slip a couple of rather heavy long boxes into the back of the car, then hastily conceal them with the now reinstated old machines plus a few raincoats (can you see the wet ground there? It was simply throwing it down by this time).


Waving fond farewells (but I'll be back, I'll be back) we next headed for Chester, although fortunately didn't have to hit the rush-hour maelstrom that is the ring route around this lovely old town. Chester itself is exquisite, but the traffic isn't. We were aiming for a peaceful little village outside, with its own cricket pitch and venerable trees. Where my dear friend Andy, supplier extraordinaire of undyed yarns, hangs out. 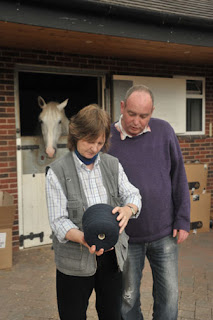 Andy was very busy getting ready for a trip across the herring pond to - guess where - Sock Summit no less! He was going over to meet up with a major client of his, the lady who supplies undyed yarns to you New Worlders. So now you know where your undyeds come from, don't you! (The horse isn't going to America, though, he thought he'd hang around and wait for the hunting season to start.)


The car was getting pretty full by this time (although the packs of yarn came in handy for cushioning the delicate Silver Reed machines) and it was with a distinct sense of relief that we turned the car back towards the Welsh border. (The credit card was pretty relieved too, I can tell you. It had had some serious work to do on this outing. Lucky we don't make trips like this too often.)


If you're going to stay in Wales, then do it properly. No predictable hotel chains. Go for something with age and character. 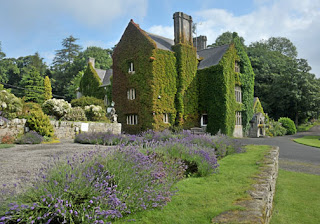 This is Bodidris Hall near Wrexham. Every period from medieval downwards, and mentioned in the Domesday book too, I shouldn't wonder. Creaky staircases, vast panelled rooms, and the wonderful scent of beeswax everywhere. Owls calling outside at night, which delighted DH. And food to dream of. In fact the overnight charges are exceptionally reasonable, while dinner would verge on the medium to expensive, so it all balances out in the best possible way. Discovered some incredible herbs and seasonings, including - could it have been red amaranth? Somebody enlighten me, quick! Whatever it was, it added the most piquant flavour to the salad.

Next morning we popped over to Trefriw Woollen Mill 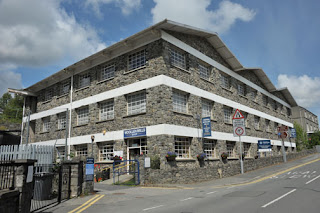 where, it being Saturday, the looms were unfortunately silent, but this was more than compensated for by the fascinating dye and fibre gardens, which held all the plants that spinners and weavers have used for centuries to create both yarn and colour. 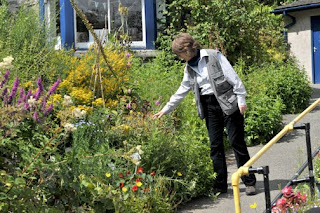 Could have wandered through these for hours, seeing all the different plants, and reading the carefully handwritten labels telling you which one did what, and where it originated. 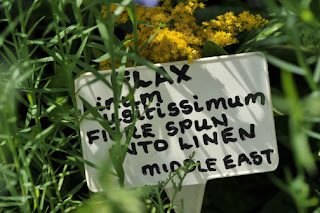 But it was more than time for DH to have his share of the fun on this weekend, so without further delay we headed straight for Gigrin Farm near Rhayader where he could indulge his passion for wildlife photography to the full. 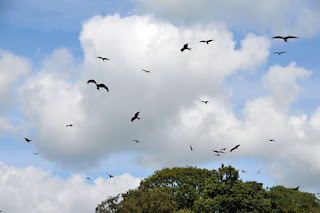 The red kites are fed here at exactly the same time each day (yes, the owners do allow for winter and summer time changes, the kites don't carry watches) so around 3pm you are treated to a spectacular display which would not otherwise have been seen since the Middle Ages when these birds fulfilled a most useful function of clearing up carrion and general rubbish. 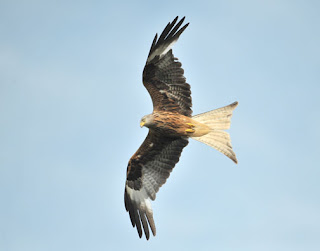 Stunning birds, aren't they? That forked tail is the quickest way to identify them overhead.


And so we wended our way, tired and happy, back to Swansea and on to the ferry home, loaded down in my case with future projects and in DH's case with thousands of digital pictures to be processed. (In fact the sea crossing was so long that he had time to do most of it on board, and process these for me too - thanks, sweetheart!) 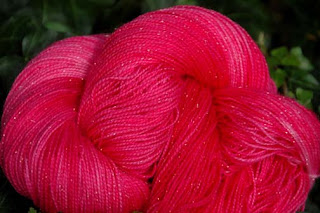 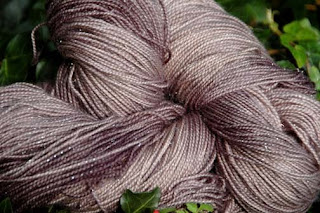 and this one I have called Silver Truffle, because it reminds me of the most mouth-watering milk chocolate truffle, lightly dusted with silver leaf. Good enough to eat. I'll be listing them on eBay tomorrow.

Oh I forgot. There has been knitting! And crocheting too. 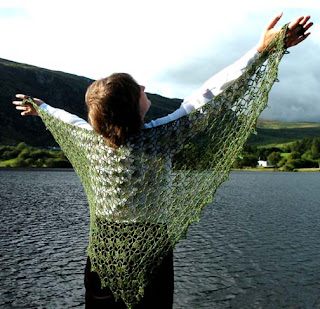 I made the South Bay Shawl for myself, and enjoyed it so much, I made one for my friend Eileen as well. 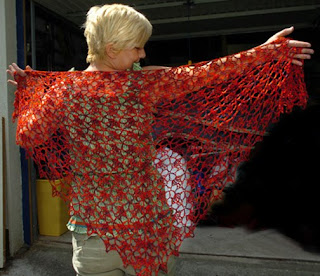 These are so quick and easy to work that they would make ideal gifts. As long as I remember that fact in the frenzy of December! 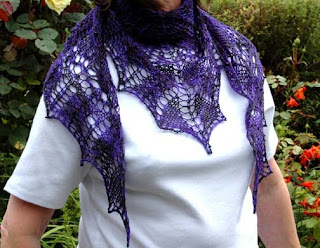 And this is the Monarch Shawl, another beautiful pattern and extremely handy accessory for throwing round your neck on cooler autumn days. Not at all difficult to knit, by the way - I am amazed at how effective such simple patterns can be if you block them strongly. Added beads to all three of these by the way - currently going through a serious bead craze.

Enough for now. Off to dye some more yarns, play with Muffy (she's been getting a lot of attention lately and is enjoying it thoroughly), and try to summon up the courage to strike up a relationship with the new Silver Reed aristocratic knitting machines. Actually I have done a little bit in that direction already. Made a rather elegant kimono jacket in black alpaca, faced with bright pink, because it didn't involve using the ribber at ALL. (You can see where my hang-up lies, if that isn't too much a mixing of metaphors. Ribbers equal trouble where Celtic Memory is concerned. It's a hang-up that will have to be taken down, shaken out, and sorted before long.) And I'll show you the kimono jacket when I've finished sewing up the facings.

And next time I promise I will tell you about breakfast with that sorcerer in the wilds of Iceland.