To Knit Or Knot? To Unknot the Knit?

Joy oh joy, the new Lantern Moon rosewood circulars arrived this morning from Knitty Noddy. And oh boy are they beautiful. That brass connection from rosewood to cable is supersmooth and the cable doesn't even kink. Don't know how they do it there in Vietnam but I'm in love. I shall order more straight away. I'd show them to you, but I pressed them into service immediately on the Elann lace crop cardi and they're a bit enveloped in there, what with all the stitches and stitch markers and whatnot.

Speaking of stitch markers, how do you stand on making your own? I've seen some cute little sets on websites, but they all cost, and they don't look that difficult to construct. I'm talking here about the dangly kind, like tiny earrings for knitting needles (which is what they are, I suppose). There is a nice little craft shop in Cork which has a great range of beads and fixings, so I might see if I can get all the relevant bits - rings, some little attachments, and of course lovely BEADS. This could be a whole new side interest, couldn't it? After all, it looks like the relationship is going to continue for some time. I'm starting to get used to the darn things. 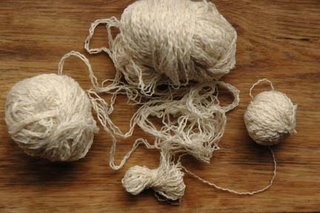 Does this picture look any way familiar? If it doesn't, then you're lucky and clearly have more sense than I do. The yarn here is a very nice linen/cotton blend, quite fine, in a pleasant ecru shade. I have two large cones of it (never buy a ball if you can get a cone is my motto). A couple of years ago I had the brilliant idea of plying four strands together to make a nice chunky yarn for some now long-forgotten project. The idea didn't work, I frogged it back and tucked the ball away. Some months later I wanted to try something in a fine yarn and hauled this out. Oops, forgot I'd plied it by four. Let's see if we can retrieve the separate strands.... Several hours later the resultant mess was tucked away again. This afternoon I found it and wondered what others do when faced with previous bright ideas gone wrong.

It's not the first time I've done this and it probably won't be the last unless I tattoo 'Do Not Ply Unless Absolutely Absolutely Sure' on the back of my hand. And there really isn't a way to solve it. DH, bless his heart, although vastly skilled at handy household tasks, says he cannot wind a ball to save his life. The only method I have evolved so far is to separate a few feet of yarn, wind each on its own ball, separate a few more feet... and so on. You never get to the end of the ball that way. What I need is several like-minded knitting friends to stop by for an evening, and each take one end and work away. I'll stick this mess back with the other mistakenly-plied balls until that happy event occurs. Maybe if I offered free beer?

The reason I was looking at that linen/cotton mix is because I succumbed this morning while just popping into my RYS (that's the one in Clonakilty, you may recall) to say hi and show her my Interlacement socks (she was entranced and couldn't believe that you could get sock yarns like that - boy is she going to have fun when she discovers the Internet!). A book of patterns was open at this one and I just had to have it. 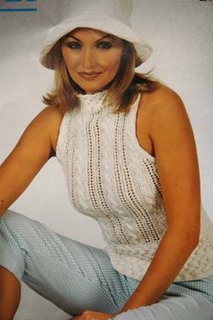 I realise the model looks a little too good to be true but actually she's a very nice person and a young mother to boot (this is an Irish pattern from Tivoli Spinners and I do know Vivienne, honestly!) It's a lightweight top with nicely twisted cables, including an unusual cabled collar and waistband, plus lace insets, and it's exactly where I've been trying to go with what I would call 'Aran' designs - that is, anything involving cables and twists. It's about time they were re-invented in finer yarns and lighter garments.

Will someone please explain to me how it is that no matter how vast your stash, how varied the colour range, textures, gauges and fibres therein, it is absolutely certain that you will not be able to find the right one for any new project? Is it Yarn's Law? I must have spent hours throwing cones and balls of yarn around until eventually I found a huge cone of 4 ply white cotton and to bring it up to the DK required, added a fine silver yarn that I was given as a gift in France recently (well, I'd just bought rather a lot of yarn at the factory shop of a famous name, and they threw in two balls of this silver because it had all become unwound and tangled. Still is.) Of course I couldn't wait to get started but found I had no circulars fine enough. HORROR! Had to go back to straights and it wasn't a pleasant re-encounter. I've got used to the lightness and safety of circulars and these heavy long metal things are awkward and difficult. Plus I just know they're going to seize the first opportunity to slide merrily out of the stitches in mid-row, leaving me stranded (or unstranded, really, I suppose). So far I'm on row 2. ..

But then there was the Elann cardi to get on with, and the socks of course, and that lavender/blue roving to spin, and the new Ladakhi spindle to try out. Wanda and everyone else, I promise I will get a picture of that spindle being used by moonlight. It's just that every night since the spindle arrived, the moon has remained obstinately hidden behind clouds. It's doing it on purpose. Maybe the spindle doesn't want to be pictured by moonlight. Maybe it's bad luck in Himalayan kingdoms, you wouldn't know.

Thank you for the nice comments on the Irish crochet lace. It's no big deal, honestly - if you've been doing motifs like that since childhood, they become automatic (although they still take ages). Angie , referring to the time involved in making an evening top, suggested I just do a border of the motifs on something else. Angie you are brilliant! You have cleared my mind and showed me the way forward. It was so obvious once you'd triggered the thought. I remembered that traditional Irish crochet lace was always done as individual motifs on a background filling of loops and picots. Why couldn't I simply make several motifs for the most obvious parts of the top, and then extend out and around from these to make the rest of the garment? That probably isn't very clear, but here's an illustration from that grand old book Irish Crochet Lace by Eithne Darcy. 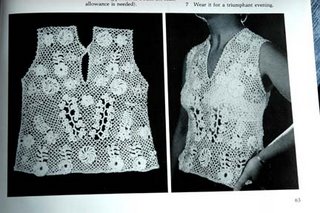 Don't go into shock. There is no way I could make something like that (or even want to try - life's too short, for heaven's sake). But you see how the different motifs have been placed and then surrounded with a mesh background? I'm going to try something like that, albeit on a far simpler scale. Thanks, Angie!

I've just sent off an email to Tivoli Spinners (you can look up their website yourself if you like and see the yarns they make) indicating my interest in featuring one of their workers in my weekly column called Busy Today. It looks like the only way of getting inside that factory and seeing the yarns up close for myself. I'll let you know how I get on.
Posted by Jo at Celtic Memory Yarns at 10:13 pm

Jo - if you use the spindle, finish the lace cardi, crochet the Irish Lace top, you will not have time to go anywhere fancy enough to wear them - not if you go as slowly as I have been! I must warn you about fancy stitch markers and fine yarn - maybe others don't have the problem, but I found they got tangled up, but good, on me! Maybe you will have better luck! I pray for a full moon for you and the lovely spindle real soon!

Jo,
Very easy to make your own stitch markers. I've been making some of my own jewelry for 20 years. You will need a good pair of round-nose pliers (preferably two pairs; I use an ancient pair of needle-nose quite gingerly as a vise and the round-nose to open out my split rings).

There is a marvelous bead shop in Fort Worth (TX) near the home of one of my daughters. And I just learned at church on Sunday of another shop in my own town.

I made a set for my sister for her upcoming birthday: sterling and amethyst and will post them on my blog *after* she gets them in late October, so as not to ruin the surprise. I also made her a matching pair of earrings.

I made new ones for Sock the First and Sock the Second, which are out of time-out. The first marker had an enameled ladybug charm (and matching earrings for me); these have red tigereye and smoky quartz, and they tone nicely with my Cherry Tree Hill yarn.

I find that if I am careful in winding up my headpin, there are no rough ends to snag the yarn.

Right now I'm having fun color-coordinating them with my projects; if there turns out to be sufficient demand for them, I'll have to start buying my supplies wholesale to cut my overhead.

We have a big fat sassy full moon here in TX, about the color of a nice chunk of Kerrygold Cheddar.

That is a lovely top Jo .I won some Tivoli Chenille on E:BAY last week ,a lovely teal colour.I agree with Peg about stitch markers ,she uses safety pins and they are much easier to remove . I have used cutain hooks too. I started a pattern from the new Rowan book using a large cone of chunky from my stash last week ...I hate using no 10 needles so Holly will be lucky if it gets finished . Back to my garden shawl ....way past the fence now .

Great ploy to get yourself into Tivoli. I tip my hat to you. Hope it works!

fancy stitch markers can be too heavy - I am perfectly happy with a loop of contrasting fancy yarn.

I needed help from 2 people to undo a 3-ply. I put the ball in a bowl and ran the yarn up over the light fixture, and we ran the ball-winder and the swift and a hand-ball. Every once in a while (too often) I put a needle through it and sort of tied-off around that so the spin would come out, and then carry on. Not a big amount, thank goodmess. Some things are worth it and others aren't.

Get professional trading signals sent to your mobile phone daily.

Start following our signals today and gain up to 270% per day.