I had never heard of Flickr until Lyn in Australia (you can see her comment on last night's post) told me she didn't have a weblog yet but had put pictures of her lace trellis scarf up there. I typed it into Google and lo and behold, up it came. And there were her pictures. The scarf looks stunning, Lyn, and thank you for showing me where I could admire it. What fun it is when every day brings a new discovery! I must look at Flickr again.

And thanks to Lorna Jay for giving me the link to a lovely English firewood poem - you can find that in the comments section too. It's a marvellous litany of which woods are best for burning and which should be avoided. The one I was thinking of (which I have now found in my copy of Irish Trees: Myths, Legends and Folklore) is translated from the Irish and has Iubdhan, king of the leprechauns, advising King Fergus:

'Do not burn the pleasing apple, drooping its spread,
Loved its white blossoms, all touch their fair heads...
Rowan, the druids' tree, burn the fair tree of berries,
Ash, dark in colour, wood for chariot wheels,
Horsewhip in horseman's hands, shaft on the battlefield...' 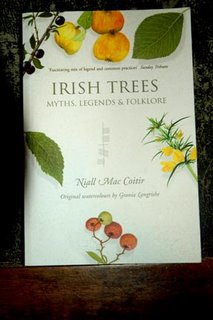 Rachel asked to see a picture of my little upright Orkney, made by Haldane, so here it is. 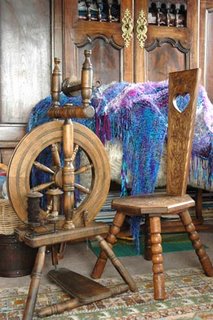 I hauled it out from the corner where it has been languishing for a while and gave it a loving polish. I tried to make the polishing feel like the strong tongue of a mother cat working over a newborn kitten, or a cow coaxing her little calf to stand up and look at the world. That wheel has seen me through bad times when I was not in the safe harbour I am in now, and it is very dear to me. But here's another wheel which shares the upstairs sitting room with the Orkney and which has not appeared in public life before: 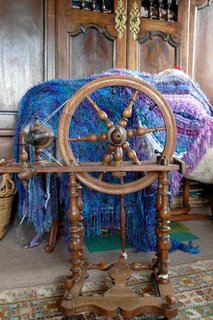 Isn't she gorgeous? Isn't she straight out of a fairy tale?. I found her in the back of a huge barn in France that was filled with ancient mouldering furniture, and fell in love on the spot. Richard, bless him, didn't say, 'but you already have a wheel'. He just went out and made room in the back of the car while I bargained for 'le petit rouet'. Not surprisingly the woodworm had paid her a visit or two, but acting on the advice of an antique dealer friend, I took her apart and tucked her into a deep freeze for a week. Then I put her back together and gave her a drink of wax polish. I haven't tried using her yet, though I must do so soon - I think she'd like to feel useful and wanted again.

Hauled a few handfuls of fleece out of the Daniel P. Buckley sack which is hanging from the rafters in the garage and carded a whole basket of rolags in the afternoon sunshine, to spin later on this evening when I've finished posting. It will be a nice way to finish the evening and relax before bed. 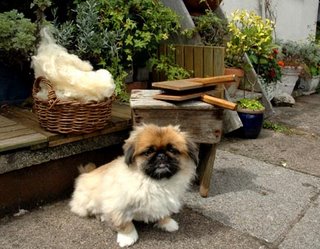 Tasha kept an eye on the fleece while I took the picture.

Do you know the Spinning Song? You probably do - it's been murdered by rather too many warbling sopranos over the years - but the original is really a lovely lilting tune which just fits the timing of treadling a spinning wheel.

'Mellow the moonlight to shine is beginning,
Close by the window, young Eileen is spinning,
Bent o'er the fire, her blind grandmother's sitting,
Humming and dreaming and drowsily knitting...'

The latest on that exciting find of the bog manuscript: I am now able to reveal, to you alone, dear readers, what it really was. The only bit they've been able to read so far seems to be an excerpt from the Psalms. But never judge a book by the blurb... Just look at the description given by the museum: 'A slim large format book with wraparound vellum cover... ' Sound familiar to you? It should do. They also observed, 'the extent to which other psalms or additional texts are preserved will be determined only by painstaking work by a team of experts.' I can save them the trouble! I know what it is!

Here's the story. Settle down. Get your knitting. No, not the complicated lace pattern, you need easy garter stitch for this. Now, let your mind travel back to long long ago. To around 800 AD in a wild Irish landscape. A young woman is running desperately across the remote bogland, leaping the dark peaty pools, brushing through the purple heather. As she runs she glances over her shoulder in fear, her breath coming in short gasps. Under her arm she clutches a thin bundle. As she hears a shout in the distance she sobs with frustration and, falling to her knees, thrusts the heather apart to hide her precious property deep amid its tangled roots. Quickly she rises to her feet, thrusts back her hair and turns with lifted chin and haughty demeanour to face the tall, muscular, fair-haired young warrior who leaps from his horse and strides toward her. As he lifts her in his mighty arms and throws her across the saddlebow of his horse, she makes no complaint, no cry. Just one brief glance back to where her treasure is hidden in safety is all she is granted before she is carried off - far from home, across the sea to the Norse lands, to become a Viking's bride.

Only her husband is justifiably miffed when he discovers that his captured wife has not after all brought with her the sought-after secret of Irish designs in woollen loops which create strangely warm and decorative garments. He storms up and down the longhouse, bellowing his disappointment and fury as she sits with lowered eyes and stirs the pot over the fire. 'Cheated!', he bellows. 'After all that trouble I went to.' And his wife sits and says never a word, thinking in her heart of the safely hidden secret back in an Irish bog.

In time, of course, his anger fades and by the time their fifth child is born (well, I did say he was tall and blond and therefore, by inference, a bit of a catch), she has relented enough to make warm sweaters for them all, with pretty patterns around the yoke. But never the complex stitches and designs of the Irish knits. ..

Sooner or later the museum is going to reveal that what has been found in that bog was actually the first ever issue of Modern Medieval Knits - New Designs For the Eighth Century Irishwoman.
Posted by Jo at Celtic Memory Yarns at 10:25 pm

oh that upright french wheel is handsome alright! how can you keep your hands off it?

it looks like it has a little cup attached to its foot—is that to hold water for flax spinning? (or am i seeing things . . .)

Love your story! My son called me halfway through my reading - I dashed off to dress his sore toe, then dashed back, with cat in hand (and then on lap) to finish the tale. Won't the museum get a shock when they can't work out the patterns, as I'm guessing they won't have charts to follow. Oh, a grand story, Jo.
I'm very happy to hear that you found my Flickr pictures. I have no idea how to make links, etc., but I, too, have learned a new thing through this. I should have added that the scarf is about 9" by 62" (around 23cm by 155cm). It's extremely soft and drapes very well.
What an stunning wheel. I've never seen anything like it, that's true. What a thrill to find it, then to have the pleasure of using such a beauty.
Thank you for your kind words, and your wonderful story.

Oh dear, Jo, I find myself checking all day long (when I am supposed to be WORKING) to see if you have posted yet. It is a joy to see where your mind has wandered each day! My day job is managing classical musicians. There is a lovely spinning song by Schubert, Gretchen am Spinnrade (from Faust). It exists as a song, or in Liszt's transcription for piano, and when well played, you can hear the wheel spinning as her tears fall. Always one of my favorites. Should have a copy here somewhere if you don't know it.

Thank you for showing your wheels. The little French girl is a beauty alright.

The spinning stool beside your Haldane - is that the Welsh one pictured the other day? Is it comfortable to use? I've got plans to make one with an octagonal seat like that, but have also seen ones with slightly larger, plainer seats. Now that I've seen yours beside a wheel though, I think I like it better.

And how good of you to have saved those researchers the trouble of slaving over the verse found in the bog. :o) I'm certain your version of the tale is much more interesting than what they may come up with.

I like your tale much better than my thoughts :D And the wheels are beautiful and you know I love the chair -- so what is the story about that wonderful blue work of art behind the wheels.... inquiring minds want to know

The wheels are true beauties. I can imagine stroking the wood with wax - was it Bee's Wax? I have bought secons-hand wool, pillows, etc. that could not be washed, and I used the freezer method too. Easier to toss in a throw pillow than a spinning wheel, but what is a girl to do when she 'must' have the wheel and not the worm?
Thanks for the wonderful story - as my Dad would say - she might not always tell the truth, but she does embroider it anyway!
I love Angeluna's story about the classical piece of music with the spinning sound - believe I have heard it, but would love to know the full name of the piece!
You make my day, Jo, now that I have found your blog!

Peg, "Gretchen am Spinnrade" was written by Franz Schubert to an excerpt from the Faust poem of Goethe. Gretchen was translated in English as Marguerite in later versions of the story. Franz Liszt transcribed the song for solo piano, and it is this version which I prefer. There are many recordings readily available, including one by Renée Flemming. Here is a clip of the song, rather flat to my taste, but you get the idea.

Anne, you're absolutely right, there is a little cup at the base and I wondered what it was for. Yes, flax does need to be sprinkled, doesn't it? And I think there is a place to fit a distaff too... This is getting more and more like The Sleeping Beauty - or Act I of The Flying Dutchman.

Finished my scarf/shawl today by really working hard.I've cast on another in rose and greens.I have put wool in the freezer but a spinning wheel !