Of Knitting, Spinning And Hurling...

Things are in a bit of a rush tonight. DH has to drive to Dublin tomorrow and stay overnight because the honour of Cork is at stake, not just once but TWICE on the hallowed ground of Croke Park and he has to take the pictures! Cork's football team meets Donegal in a semi-final tomorrow, and on Sunday the hurling team takes on Waterford, also in a semi-final. Whatever about the football, Cork's position in hurling (our national game after all) is something prized above all else. It isn't a matter of life and death - it's much more serious than that. A tide of red will be flooding towards the capital tomorrow (Cork's colours are red and white or, as they are often described, and quite accurately if you know the game of hurling, 'blood and bandages'.) Now it's only 160 miles 'twixt the two cities but Irish roads are not like those of America or Canada (or even England for that matter). They twist, they turn, they leap off delightedly to greet tiny villages like long-lost friends. It takes three hours at illegal speeds (some chance) on a good day to get there: tomorrow it will be more like seven or eight with the crowds. Yes, all the flights and trains are full too. We take hurling seriously. I'd put in a picture for you, but I think you should get one fresh from the field on Sunday rather than an old one. Hurling goes back as far as any records in Ireland, and probably quite a lot further than that. It was certainly well established when Cuchulainn was around. The game of shinty in Scotland is similar although perhaps not quite so bloodthirsty.

Anyway the point is that I'm going up with Richard both for moral support and to help with the driving there and back (if I drive coming home, he can work on the pictures on his laptop and send them to the paper as we travel which means we just might get to bed before dawn on Monday morning). So not sure about my posting tomorrow night. Right now I'm packing my really seriously important things to bring - the Interlacements socks which are nearly down to the exciting bit of turning the heel, and a big cone of a fine shiny beaded yarn in white with which I intend to try an Irish crochet lace experiment. Let tomorrow's game drag on as long as it wants, I'll be happy in the car park. On Sunday of course I'll try to get on the sideline with DH and his 500mm lens to cheer Cork on. There are times (though admittedly few) when even knitting has to take a back seat.

The happy news from today is that after spinning a couple of skeins of raw wool from that new fleece, I decided to have another go at those so-soft rovings I'd bought from Warm Threads earlier in the year. I mentioned in a previous posting that when I tried to spin them on my wheel I couldn't manage them at all - they kept breaking. Obviously I'd got too used to the ease of 'wool in the grease' which clings together very helpfully. I went back to a drop spindle with the soft rovings which was fine but a little slow. Today I got up the courage to try again with the Orkney wheel, and it WORKED! 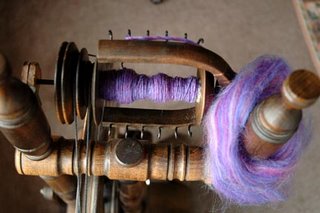 I really am distinctly chuffed about this. I had been getting so jealous of Anne and the way she seemed able to spin both fine wool and delicate silk with offhanded ease. Now I might be able to tackle some of those other lovely coloured rovings that had been languishing in a box on the top shelf in the workroom. And I wonder if I could try to incorporate a very fine thread of glitter at the plying stage?

(I must learn Navajo plying. It can't be that difficult...)

Yesterday afternoon was so hot and airless that we took some time off and went for a walk in the woods near Ballyvourney, on the Cork/Kerry border. 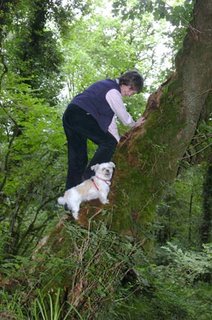 Sophie is pretty handy at clambering up trees; this one was covered with thick moss and when we came down we both smelt beautifully of earth and moss and green growing things. I love the varying shades of green and the ferns and bracken, and the shapes the trees take in the woods, like figures out of Tolkien or portals to an enchanted world. 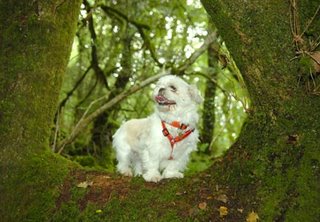 I was looking through the pictures from our recent trip to France and came across this one of a crochet curtain on a shop window - I think it might have been an art gallery - in Brittany, which had intrigued me. As a curtain it wasn't much cop (you wouldn't want to be changing your clothes behind it), but as a decoration I thought it was rather elegant. 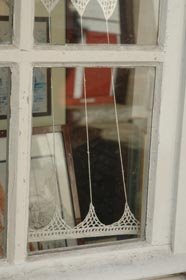 The French have an exasperating way of doing everything with style and panache. Even a busy housewife on her way to the market looks like something out of Vogue. I don't know how they do it.

I shall search Dublin diligently for yarns tomorrow, but I don't feel very hopeful. For some reason our capital city is an arid desert when it comes to craft materials, although you can buy the finished products easily enough. I have been following a thread on Knitter's Review Forum about good shops and discovered a query from someone coming to Ireland for a week end. Where, she asked excitedly, were the best yarn stores. I was so embarrassed. I promise you that if there is a stock of yarn anywhere, be it even pastel acrylic, I will track it down.
Posted by Jo at Celtic Memory Yarns at 11:12 pm

Have a great weekend -- when you come back I will have 2 socks on 2 circs to show off to you :D Love the pictures Miss Sophie looks like she owns the tree and all she can see from there. A very happy pup indeed.

It is actually a bit cooler here tonight - maybe we finally broke thru the heat wave..

Have a lovely weekend, and good luck with all the driving. I've got to be up at an evil hour in the morning to go on a canoe trip with my son, father, brother and niece this weekend. First two things I packed were wine and a sock in progress.

Well I know nothing about hurling, so can't comment, but hope you thoroughly enjoy it.
I have to conclude that I'm a better knitter and spinner than photographer, as I've added a picture to Flickr, of a vest (you know what I mean) in-the-making from navajo-plied yarn, spun from a variegated roving. The colours here are very similar to your lichens, quite green, but alas, not in the photo.
Navajo plying is very easy (hmm, famous last words), just chaining, slow the pedalling, increase the feed on - and there you have it.

Daft English-woman asks is Hurling like Hockey? I know zilch about sports . I once attended a football match and wrote letters.I was so angry with then boyfirend afterwards for his tribal cheering and blood-lust I didn't speak to him for hours.Thank-goodness Jeff isn't bothered about any .I dont think I was ever chosen for a team on sports day due to my complete lack of wanting to win ..ah well. I really have to read some Irish history pre-Cromwell. I got all excited yesterday when U.K.History had a cycle trip around the Irish coast ..sadly only the North .I wait to hear what Hurling is .

Love those little French lacy curtains. Those shawls from your previous post are fantastic too!

that tree climbing looks like such fun! sophie is just adorable. but when you sy it is hot and airless, and i see you have on a vest, well, i am ashamed at what i have NOT been wearing these last couple of weeks! (wink)

the spinning looks beautiful and so glad you are using that gorgeous wheel. the color looks good on it

Jo, first let me tell you I love reading your blog.
check out:
http://www.woolworks.org/stores/ireland.html

For a list of knitting shops world wide............hopefully there's one or two you didn't know about?
Sorry this is so late! You're already on the road.
Sue James

Mrs Nito ..indeed ! I must get Holly to sign out before I start

If you get back to that place in France (lucky you!), would you mind taking a close-up of that alleged curtain? I have a Dover book of graphed designs suitable for filet crochet, so if worst comes to worsted (baaaaaad yarn pun, sorry) I suppose I could adapt from there.

I'm an American who visited Dublin and Ballycastle and Belfast in the north this spring while visiting relatives. I was Oh, so excited about the yarn possibilities, particularly since everywhere you looked in the country were sheep, sheep, sheep.

Alas, the two yarn stores I found were full of acrylic and acrylic blends. None of my relatives are into fiber arts and were of no help either. We are returning again next year; if you can recommend some lovely stores, north or south, it would be much appreciated.

I was in Dublin, Belfast and Ballycastle this spring and eager to find a yarn store full of handspuns, particularly that in the country all you can see is sheep, sheep, sheep. Alas, the 2 stores I found were full of acrylic and acrylic blends. My relatives were no help as none of them are into the fiber arts. As one of them said, why would you want to knit when we no longer have to?

We plan on returning to Ireland and the NOrth next year, if you could recommend some lovely shops it would be much appreciated.

Hope Cork won the Hurling contest and that you had a most wonderful time! Can hardly wait to read your next installment. I keep checking hoping it's posted.