The Sock That Went to Bandon

Just finished re-listing my yarns on eBay. I've been having such a nice time this past couple of weeks posting on my weblog and checking out everyone else's and making new friends that I quite forgot to put Celtic Memory Yarns into public view until someone sent me a plaintive message. Now all five of the newest collection are on there so I can relax. Lunasa is, I think, my favourite at the moment, although I love them all - I wouldn't have spent so long getting the blend just right if I didn't adore each and every one. And when they are finished and skeined up, I have to scour the countryside for just the right location to photograph them. I searched everywhere for a field of genuine hay bales as a backdrop for Lunasa and, wouldn't you know, only found exactly the right place half a mile from home at the end of the day. As Dorothy in The Wizard of Oz would say, 'Right in my own backyard.' 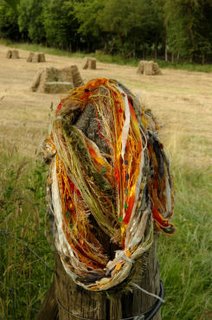 Anne was talking on her weblog today about St. Anne and how she remembered celebrating her feast day as almost like her own birthday. Anne asks if anyone else knows of St. Anne as being the patron saint of knitting. Coincidentally, Peg asked me today if I knew of just such a patron saint, since she is desperate for another 15 yards of Silk Stream by Fleece Artist to finish a project. Peg, you should definitely talk with Anne about this! To add to the body of knowledge, I had always heard that St. Brigid was the patron saint of spinning, and St. Katherine of lacemaking. And by the way, Peg, why don't you try Knitter's Review Forum too? They're lovely people and so helpful, and I'm almost sure they have a special section for yarn appeals like yours. Good luck with the search.

Somebody somewhere (and I'm really sorry I can't track down the location - was it Knitter's Review or on a weblog?) gave me the tip that it's really quite easy to use one very very long circular to knit a sock. Thank you, whoever you are. Put like that, it seemed a simple operation, so I just dumped one of the circulars from the purple sock and it worked fine, much to my surprise. I took it out with me this morning when I went over to Bandon for the Friday country market. Rho , you're the Harry Potter expert. Who, in which book, said, 'I didn't get rid of the Bandon Banshee just by smiling at her!'?

While having coffee I took out my sock and started working on it. This, by the way, is far from common practice in Ireland at the moment and it still takes a bit of courage to put oneself up for public attention, but I'm determined to spread the good word. An elderly lady who was sitting next to me immediately took interest and wanted to know exactly how the one-circular-needle method worked. 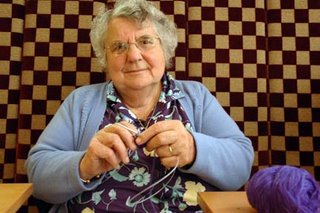 Mary talked in her soft voice about the little coastal town of Kilbrittain where she was born, grew up, married and still lives now. She brought out a composite photograph showing her son at different stages of his life - a teenager, on his wedding day, at a birthday party, and finally two weeks before his death from a brain tumour. 'There's a lot of sadness in life,' she said quietly, putting the picture away carefully again. But her eyes are serene as she gazes at passers by, and there is great strength in her quietness. She puzzled over the unfamiliar method of knitting for a little while and then her face lit up. ''I can see your sock now,' she said with satisfaction. 'So that's the way of it!' She finished off a row and handed it back, smiling.

Waiting in the supermarket queue was a good place to see how quickly another row could be done. 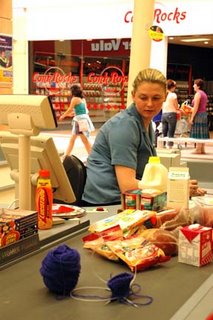 Therese Butler was on the checkout. 'I can indeed knit,' she agreed when asked. However, she revealed, cross stitch is also a passion, and she is searching vainly for a pattern to do badger and fox (her father loves wildlife). In Ireland we don't have access to all the magazines you do in the States, and I think Therese hasn't quite switched on to the Internet yet, so anyone who can help, let me know and I'll happily act as middlewoman.

In an odds-and-ends shop nearby I found some marvellous new containers for projects. I mentioned in a previous posting that Vogue Knitting had an advertisement for these lovely clear totes for your knitting, which could clip on to your belt while you worked, or stand alone, keeping yarn and needles safe. I was on the point of buying one until I saw the ridiculous price. Then I discovered those little plastic satchels which held toys, and found that they would do exactly the same job. Now I came across several more options which I immediately purchased and brought home to photograph for you. 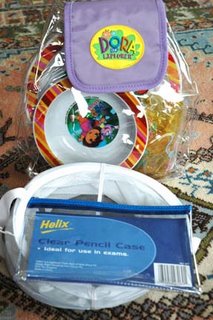 Now here they are with some of my projects in: 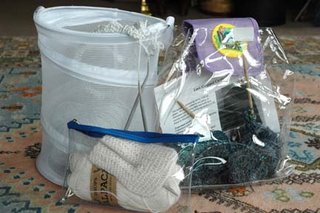 The pop-up laundry bag is particularly useful because it folds flat and can be taken anywhere; then when you want to knit, it holds the ball of yarn securely and eliminates that maddening chase under and around table legs and the subsequent need to remove bits of fluff, hair, and other rubbish. And all these together for under ten Euros (oh don't bother to convert, we're worth more than you at the moment but by next week it could easily be the other way round), whereas the Vogue beauty was over 40 US$ as I recall.

On the way back over the hills to Macroom, the blue Ballyhoura Mountains looked beautiful after the rain. 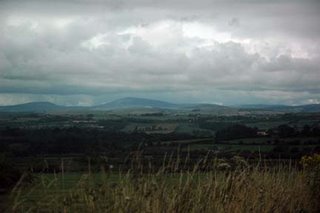 I was playing an Enya tape as I drove, and the scenery matched her music perfectly.

When I got home, Richard met me with a secretive air and led me to a thick hedge where he had discreetly marked one spot with a single daisy. I peered in and saw a tiny nest. Putting in a tentative finger, I felt four warm, feathery, very tiny heads. (It's OK to touch them once they're hatched - Mum won't desert them now.) The baby wrens are too young and small to be photographed yet, but the sparrows busily engaged in gathering fibre for a weaving session of their own nearby were only too pleased to pose. 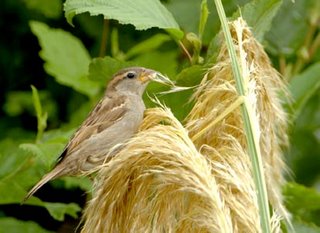 I really must stop knitting the rib of the purple sock. It just get so hypnotic that although the intention was definitely to create some sort of pattern - perhaps cables, or twists - I can't seem to halt long enough to change from that k1 p1 rib. So far every pair of socks I've started is rib all the way. Tomorrow I definitely brave those tiny teeny little rosewood dpns, armed with my new confidence and some divine Simply Socks yarn.
Posted by Jo at Celtic Memory Yarns at 11:07 pm

fibertrends patterns has a felted badger pattern that is really cute. hmm don't know about the fox, but mebbe someone else will know.

my mother prayed to st jude her whole life and still does—such a fatalist! tsk tsk.

i don't know who the patron st of knitters is! i wish i did. st anne was supposed to be patroness of seamstresses, lacemakers, and lace workers. that's good enough for me!

You mean you don't know where to look for yarns on eBay? Wow, is your credit card going to take a bashing when you see what's on offer! Millions of irresistible items! Those of us who don't have Michael's and Joanns round the corner depend on eBay! Look first under Crafts, then Knitting, then Yarn. If you want to see what mine look like, they're under Handspun/Handpainted in the Yarn section. Or, even simpler, just Google-search for Celtic Memory Yarns.

Gilderoy Lockhart (may be spelling his name wrong) he was the phony dark arts professor in.....Secret Chamber I think.

Love the look of your colourful yarns, Jo. As I've only just (yesterday) found you, could you tell me how you make your yarns? You describe them as hand-plied, so does that mean you get commercial yarns and mix-and-match them to find the brilliant combinations?
I'm going to enjoy reading your musings, and watching your yarns develop.
As a complete aside, I was intrigued to hear you mention Millstreet, as some of my husband's ancestors (Dinneen part of the family) came from there to here (Australia) somewhere around the 1860s. Ahh, what an extremely small world it is.
(I just realised I wrote (was going to say 'said') 'hear' instead of 'see', but I think 'hear' is probably closer, because your wonderful way of writing makes me feel as though you're just here, talking to me.)

Anne "Get Knitted" has that pattern ..just put the name into search .From what we read these poor saints get a lot more than one job . You should be selling a book of Irish landscapes Jo .What a fabulous picture of a Wren .No need to worry about the cat and my garden birds he is only allowed out on a harness according to the breeder.The humiliation for both of us I can't imagine taking the cat for a walk !! A couple of local bangers( Homies) have pit-bulls so his puss-catness will be swept up rather a lot I feel .

Delighted to hear of the Millstreet connection, Lyn! The Net has really made a global village of us all, hasn't it? Anyone you want me to contact there for you? (No, you can't have Daniel P. Buckley, he's spoken for, although you might have a chance with his dad, John-Joe.) What do you knit? (It will have to be good strong socks to impress John-Joe...)

Jo- read my post of today and you will see my guardian angel found a solution. I will write to Anne, however! Love the idea of the folding laundry basket to hold projects. I am having difficulty getting a sock started, but once I choose the pattern I know I will be happy. Now to look at your yarns!