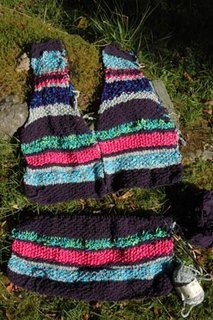 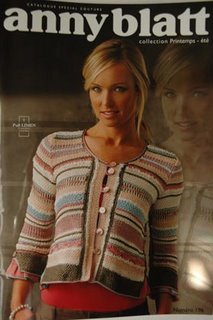 I will say one thing for Wimbledon, you certainly make inroads on knitting projects that had been sort of hanging around all summer while you got on with other things like everyday life. A good long semi-final got me through two fronts of a jacket/cardigan that I'd despaired of ever finishing. Today's final between Federer and Nadal saw me soaring up the back of the cardigan and if they'd gone to a fifth set I'd have been past the armholes and within sight of the finishing line.

I first got the idea from this Anny Blatt magazine. No, that's not me on the cover. She looks a bit too confident for my liking, and in fact I don't like pastel shades much either, but I really went for the cute little splits on the sleeves and sides and immediately got that 'I want to make this NOW, RIGHT AWAY, sort of feeling. Yes, I will admit that I already had a superb circular crochet shawl (Karabella design) almost finished and a dolman-sleeved jacket half-way through, both in my bag (did I mention I was on holiday in France at the time?) but I unceremoniously relegated them both to the back seat of the car (the final insult for the dolman-sleeve was being slid off on to an unwanted spare circular so that I could use my favourite Old Colonial rosewoods to start the new love affair).

Well, I'm back from France a fortnight and hadn't got any forrader until Wimbledon fortunately happened. I did also have a mountain of ironing to tackle, and tennis marathons are good for that too (as are old weepies on the daytime TV - Waterloo Bridge anyone?), but Anny Blatt was in there and serving for the match.

No, that's not a Stone Age bikini on the left, it's the two fronts and half a back. Now I come to think of it, most if not all the yarns are French - some Anny Blatt, of course, Phildar, Plassard, and a couple of Bouton d'Or bargains. The bright green is from La Droguerie in Paris. (Can you tell I've fallen for bright colours lately?) I'll have to give it a French name when it's finished.

Because this one IS going to be finished. I swear it. I will not start another single thing, no matter how tiny, no matter how tempting, until that jacket is finished AND sewn up, AND the buttons on. At this stage of my life I have to take a stand. I'm not going to do anything as courageous as the Yarn Harlot, who actually hauled out all the unfinished projects and piled them up (good on you, Stephanie Pearl McPhee, you're a better woman than I am) but this one I will stick with. It can't take much longer.

But I've just had this great idea for a lovely summertime choker or necklet - a band of Irish crochet lace in a clear bright colour which could pick up the shade of a skirt... NO, not until Anny Blatt is done.

Did I hear somebody murmuring down at the back because I dared to mention crochet? Listen, I'll come out front on this one and declare my predilections honestly. I do like crochet. I also (might as well get it all out in the open) like quilting, spinning, and painting all the woodwork I can reach white. I just happen to love knitting most, and have a passion for yarns and yarn collection that will ultimately prove disastrous. Fortunately I also design yarns and sell them on eBay, so I persuade myself that that justifies the rest of it.

Well, it's Sunday night, so I'd better go and re-list the summer collection on eBay. Then it's back to Anny Blatt. I'm definitely getting the feeling that that girl on the cover of the mag is called Anny. She sort of would be, wouldn't she?
Posted by Jo at Celtic Memory Yarns at 6:41 pm

yes sport on tv does wonders for knitting projects. Unfortunately here in Australia, most of them are in the middle of the night :( except for local sports of course.

Good for you if you can not stray onto another project!!

Hey Jo ..great posts .All crochet isn't toilet roll covers is it? I see my link ..that is a tiresome task so I have a few to add myself.Welcome to blogging.angie.

All the major sporting events are over Jo I think ...do what we do put on something like "The West-Wing" so often seen that we don't need to concentrate we just knit and laugh at all the great lines.If not we watch old "E.R" on some digital channel as a background .