Where oh where were you all yesterday when temptation struck? (Still
fast asleep to the west , I imagine,and the day finished further east, since it was 10 am here. I had spent three - yes THREE - maddening days working on that tangled ball of chenille from my Anny Blatt project and still hadn't managed to free it up to finish the back of the jacket. I was getting that dangerous feeling of 'oh I'm sick of this project, it's never going to be finished.'

You know how it is when you get a new idea - you are almost shaking with excitement, you can't wait to be off to buy the yarn (why is it that the stash never has quite the right one?), and the world seems a lovelier, happier place. It's a feeling like falling in love each and every time. But almost like relationships, some go sour quicker than others.

Now that I come to think of it, it's exactly like relationships - or those of teenage days anyway. One morning you're madly in love with the boy who walks to school along your road; that evening you've actually met him and discovered he's boring, has absolutely nothing in common with you, and you can't imagine what you saw in him in the first place. Did you ever start a knitting project like that?

I will say, though, that Anny Blatt hasn't reached that stage - yet. (She isn't created entirely in AB, by the way, and this isn't a plug for that company though they do make some exquisite yarns, it's just because I adapted the original idea for the cover picture on the latest issue of their magazine.) I finally finished the back at midnight last night and today I will start on the sleeves. I would normally work on both together but realised that I can't in this case - with so many different colours, some doubled, on the go at the same time, and most being stranded up the side to take their next turn, it would be a superspeed telegram to Disaster Central to come and get involved. So it will be the weary job of first one and then the other - SSS or Second Sleeve Syndrome again! 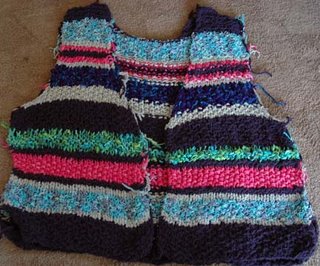 Yay, back and two fronts done! NEARLY there!

But BEFORE that midnight completion - well this is where my wail to you comes in. Where were you all when I needed you? It was a bright sunny Saturday morning, I felt like doing something really nice and happy, and that darned ball was still resembling the Gordian Knot (look it up, girl, look it up!) Please understand that I'm not actually reprimanding you here. I'm not saying it's completely and entirely your fault - but if just one of you had sent me a wise but caring message at that moment, reminding me of my vow to finish AB before I started anything else; even if one of you had lightly, casually, smiling to show there was no harm at all in the casual query, enquired as to the actual size of my yarn stash down in the basement, it might have swung things back to the path of virtue. I might have stayed indoors on that glittering morning and worked solidly on untangling the chenille.

Who am I kidding? I jumped into my little jeep (a black Jimny Suzuki which I love with a passion but have to be careful not to round corners in too fast as it's only a tubby little box with a wheel at each corner really and can't make like a low-slung Ferrari no matter how hard it tries), and headed for the coastal town of Clonakilty. You can get there from here entirely on back lanes if you know how and I do by now. Some of the boreens have grass growing down the middle, and some are so twisty they'd put the heart across you for fear you'd meet a gigantic tractor and trailer on a blind corner, but it's a lovely way to travel. You can imagine you're back in an earlier age, long before the advent of cars (except for mine, of course).

Between Enniskeane and Clonakilty is a tiny hamlet called Lyre (crossroads, pub, population of approximately seven in a good year) and yesterday was Fair Day. I hadn't realised that Lyre was up in the big league, but there was a carefully printed notice on a piece of cardboard mounted on a stick on the way in, which is how I know and am passing on the information to you. 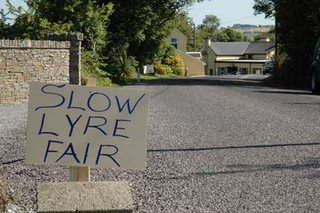 All I could see of the fair was a horsebox containing two peaceful donkeys gazing out at the world and admiring the sunshine; and two men arguing on the patch of grass in the middle of the village over a small cross pony. 'I wouldn't take a king's ransom for him, I'll tell you straight,' one was saying as I passed. I thought I'd wait to photograph until later, when things had warmed up, and went on my way.

My RYS (rural yarn store) in Clon is a very happy crowded little place with a lovely lady who doesn't want me to mention her name because she's shy. The shop is crammed with handknit sweaters, scarves, hats and other delights for visitors, and at the back are all the shelves of yarn. Once she saw me she prepared for a session.

I hadn't told you this, but I joined Knitting Help the night before last, on the recommendation of lovely helpful Becka, and the first thing that dazzled my eyes was the utterly stunning cardi on the Elann pop-up. I knew instantly I couldn't live without it. (SEE what you could have avoided if you'd just extended the hand of encouragement from Yarnaholics Webonymous? I'd have welcomed a word of advice from Start-Up-Itis Webonymous too, I can tell you.) 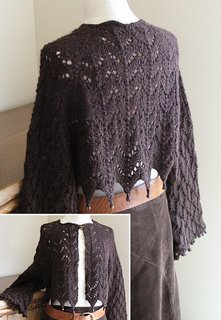 Isn't it gorgeous? Don't you just want to start it this second?

Well anyway, this cardi was recommended for Aran weight so we looked at those. But I grew up with these wools and I'm sick of them. Besides, I felt that the pattern on the jacket would look a lot better in a smoother, almost harder yarn, with a bit of weight to it, you know what I mean? Eventually, after we'd pulled everything in the shop out... 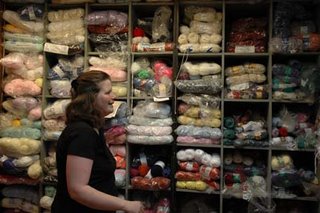 That's my shy friend from Knitwell Wools in Clonakilty - on the main street, you can't miss it.

...and I'd heard all about her two little girls aged 3 and 5 who are dying to learn to knit themselves, plus the new baby boy who just enjoys tangling the balls of wool), my keen eye lighted on some very nice linen/cotton mix from our own Cork-based Tivoli Yarns. Now this is definitely thinner than Aran weight, but heck, I've always been a loose knitter. (In my teenage days, I used to follow the pattern for a child's sweater to get the right size.) I know what you're going to say, you virtuous, get-it-right-first-timers, I should swatch and swatch until I GET GAUGE. Well I didn't have time for that in my young days. And to tell the truth, I still think it a bit of a beastly swizz to have to go down a needle size or two when by just using a smaller pattern (and less stitches, tee hee) I can get along fine.

I thought this teal shade from Tivoli was just right, however, and the texture is ideal for showing off a lace pattern. I will even reluctantly consent to going down a couple of needle sizes to avoid making it too loose and loopy (don't want to wreck the fine pattern) and then I bet I'll come out right ON GAUGE.

I was so pleased to find the right yarn that I decided to plunge even further into perdition and bought a couple of balls of Regia sock yarn too. We talked about the Magic Loop method and she was intrigued but couldn't see how it worked. Neither can I at this stage, but my lovely new friends on Knitting Help and Knitter's Review Forum have given me so many tips that it has to work. If I shut my eyes and follow the pattern absolutely to the letter (stop being pedantic you at the back, you know what I mean), it WILL work... won't it? 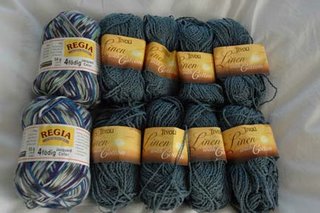 But I promise I will start on those sleeves for the Anny Blatt right now. It will be finished... (I wonder what size basket Stephanie Pearl McPhee uses for her WIPs?)

Oh the fair at Lyre. When I came back through with my loot, no more than two hours later, that was over. There wasn't a human being to be seen; the donkeys were still gazing peacefully at the world from their horsebox, the pony was snatching irritated mouthfuls of grass around his tether, and the noise of singing from the pub (that yellow building down at the end of the road in the picture) echoed over miles of sunlit countryside. What a nice fair!
Posted by Jo at Celtic Memory Yarns at 12:16 pm

So you live in a nice peaceful ,cool area with a lovely yarn shop ....packing cases ..."Oh hi Jo" I was just passing so I dropped in for about 30 years . We ,on the other hand, had to go to town in the boiling sun to get some ibubrofen gel for my shoulder,something for wind , some ear-plugs ( the locals are not big fans of peace) and some head-ache pills.I spent most of last night sitting on Holly's bed as she sobbed she wanted a baby ( luckily this is P.M.T ). I was hoping for a nice set of grand-A-levels. We decided it was pussy-cat action time ...a kitten to love .We hope to get a Burmese as soon as finances allow as the Govt. doesn't do quite enough child maintenance for Mum and Dad 's liking.Who'd have hormones ?Then today I got lucky and found her the "Desperate Housewives" book in the sale so she can dribble over Mr Culp.I am a complete wool tart having one affair after another so don't look to me for help ! Off to lay by the fan and maybe some knitting.angie

note punctuation side of brain still not working !