I had scoldings and remonstrances from many of you after I wondered out loud about Muffy being a secret yarn fiend. Wanda had even gone so far as to suggest that I was fingering the wrong suspect. Well have I got news for you! (That was a rhetorical question, you don't need to answer.) This morning DH had gone upstairs to relax awhile in the quiet of the drawing room (also my yarn room) and keep an eye out the window for any rabbits or foxes passing by which he could photograph. Downstairs happily getting on with Sock No. 1, I suddenly heard him shout for me. I ran up and found, in the following order:

1. DH, on the floor with his camera (shaking with laughter).

2. My WIP basket on its side, its contents (numerous) spilt wide. 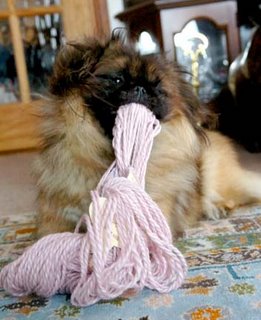 Of course I fell upon her with cries of horror, ignoring DH's pleas that I should leave her alone until he got at least one more shot. I managed to prise her jaws open (I can tell you this lassie was more than disinclined to yield up her luscious treasure) and retrieve the yarn. Isn't this getting like a horror movie for yarnaholics? You know, a sort of Texas Chain Saw Massacre where the most beautiful and delectable yarns get carved up and we have to watch from behind the sofa in fascinated terror? 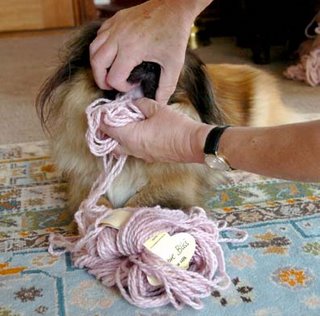 Yes, you can just make it out, can't you. That was indeed a beautiful ball of Debbie Bliss alpaca silk in the softest shade of pink. I'd been working on a little cabled vest and got distracted by another project, which is why it was waiting trustingly for me in the WIP basket. And I'd failed it! It's all right, it's doing fine now, just needs a little time to rest and recuperate from the trauma. But thank you for asking. I'll pass on your good wishes. I've put it in a little basket on a shelf by itself for a while.

So Wanda, and the rest of you softniks who counselled understanding and wisdom, what do you say now? What advice do you have for the owner of an animal possessed of such depths of moral turpitude? (Tasha, needless to say, is prancing around with the smuggest of 'See, it wasn't me' expressions.) Should I commit Muffy to penal servitude? Send her for therapy? Or perhaps I should simply take her with me next time I visit my LYS. On the other hand, that might be an unwise move...

To happier matters. I had long coveted a very chic little see-through plastic bag/container which was advertised in Vogue Knitting earlier in the year. You popped your project inside for travelling, and when you were ready to knit, you took out the WIP, and fed the yarn through the side, leaving the ball safely inside. Only trouble was, they were charging a king's ransom for these little bags and I couldn't bring myself to pay that price.

Then today I spotted some charming little toys in bags in a local shop window and realised they were just what I needed. 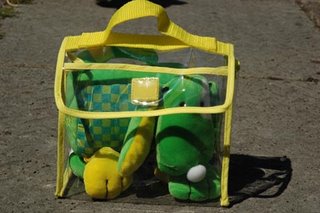 No, I know I didn't need the toy, but I soon found a team of degenerates who did... 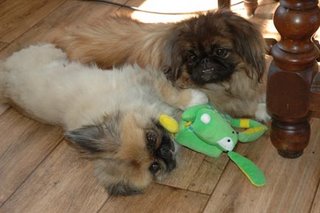 And I found that the little bag, which has its own Velcro closure, just swallowed my sock project plus needles and yarn beautifully. It even has a strap by which I can fasten it to my belt if I want to do walkabout knitting like the women of the Aran Islands long ago. 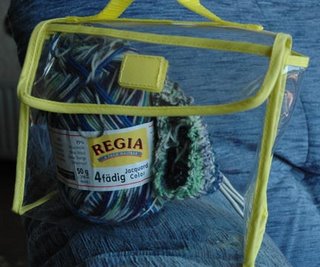 Speaking of socks, I went looking for lovely dpns last night and found some delicious ones on a Scottish website. You wouldn't imagine that a sweet old-fashioned Highland company like Scottish Fibres would stock rosewood dpns but they did, so I went entirely mad and ordered two sets of four-inch. I know, I'll probably regret the short size, but the next one up was ten inch and I'm having enough trouble with the present ones (around 7 inch) as it is. And with two pairs I can get both socks going at once! (Thanks Grouchywif on Knitter's Review for that incredibly sensible and marvellous hint.)

The Anny Blatt is proceeding too: up to the armhole on the first sleeve. Maybe the best way is to set a deadline: to say, on such a day I will WEAR that jacket. Sometimes it works - you know, you imagine yourself in it, hear the compliments, bask in the glory - and then you find you've forgotten to buy buttons and the whole thing looks kind of wrong anyway...

That was what happened with a Noro sweater I made last year. Mooching around John Lewis on a trip to London, I fell like a ton of bricks for the Silk Garden they had there and bought enough to make that stunning sweater in the Cornelia Tuttle Hamilton book - you know the one? 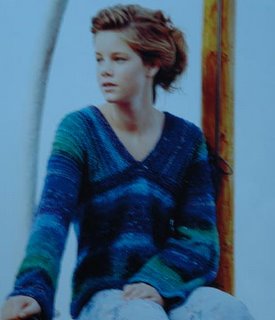 Sorry it's so blurred, it's a shiny page and didn't reproduce all that well. Now the colours there are spectacular, and when I'd made it up they were just as stunning. BUT... eventually I had to admit that the shaping was just a little too casual, and the whole thing hung about like an old mackintosh rather than a design item. SO after doing the usual thing we all do - sticking it in the back of the cupboard and hoping it would transmogrify itself somehow - I bravely took it all apart, frogged right back to the beginning, skeined up the yarn and washed it.

Incidentally, I think Noro Silk Garden benefits from a washing. You wouldn't think it was silk when you handle it from new - it's so harsh and unyielding. It's a whole lot softer now, and I have a BIG pile of it. 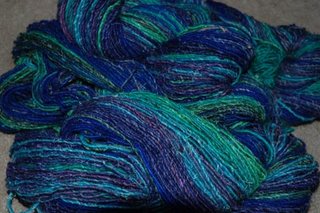 I think when I make it up next I'll still go for a simple design - after all, with something like Noro, the yarn makes the statement, not the stitches - but I'll incorporate a bit of control with ribbing and shaping. It's like those high fashion garments you see on the catwalk. For heaven's sake, anything would look good on those models, even a plastic bin liner. On a normal human being the design would look weird. And so, the moral of this tale is never to believe too much in a glorious picture in a magazine. They were paid to make it look good. Trust your own instinct.
Posted by Jo at Celtic Memory Yarns at 10:48 pm

Oops, what can i say: Muffy got nailed. Big time - photographs and all.

I love knitting socks on the 4" needles. No mucking about with sharp point getting in the way all the time.

The silk is beautiful!

Thanks for the link to Scottish Fibres.

Just as well I'd added just such a ball to your parcel Jo !

Hi Jo, Just tripped over your blog and can't stop reading. Love it. As for the Klaralund in Noro, J, my dear mathemitician knitting friend, ran into your problems and straightened them out. If you are interesting in redoing Klara, I can put you in touch with her. There is also a KAL on Klara, but I think J figured out mostly for herself, hers is beautiful. You go, Muffy!